Hundreds have been detained by J&K Police. While police has defended the move, questions arise on whether the detentions are legal or can help stop the crimes against non-locals and minorities. 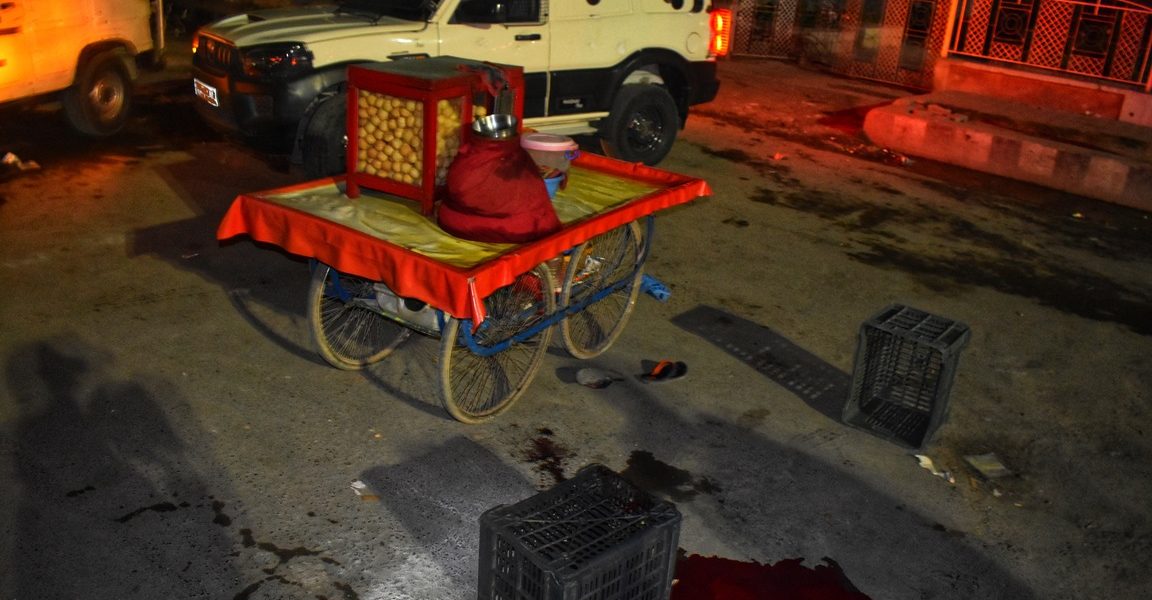 The cart of the seller who was killed in Srinagar. IS has claimed responsibility. Photo: Faizan Mir

Srinagar: Islamic State has claimed responsibility for killing a street vendor in Srinagar while The Resistance Front has taken responsibility for a carpenter shot dead in Pulwama, in a step up of the offensive against non-locals in Kashmir, on Saturday, October 16.

The first attack took place in Srinagar’s Eidgah locality where a street vendor from Bihar, identified as Arbind Kumar San, received lethal bullet shots in a shoot-and-scoot attack at around 7 pm.

“He seems to have been shot from a close range. Locals rushed him to the nearby SMHS hospital where doctors declared him brought dead,” a senior police officer said, adding that searches are being carried out in the area.

A graphic video shot moments after the attack went viral on social media, showing Arbind’s motionless body on the road in a pool of blood as onlookers watch in horror.

The place of shooting is not far from the government-run school where two teachers from the minority community, including the school’s female principal, were killed earlier this month.

Soon after the killing, a joint team of J&K Police, Army and paramilitary forces reached the spot. They were seen checking vehicles and questioning some people. 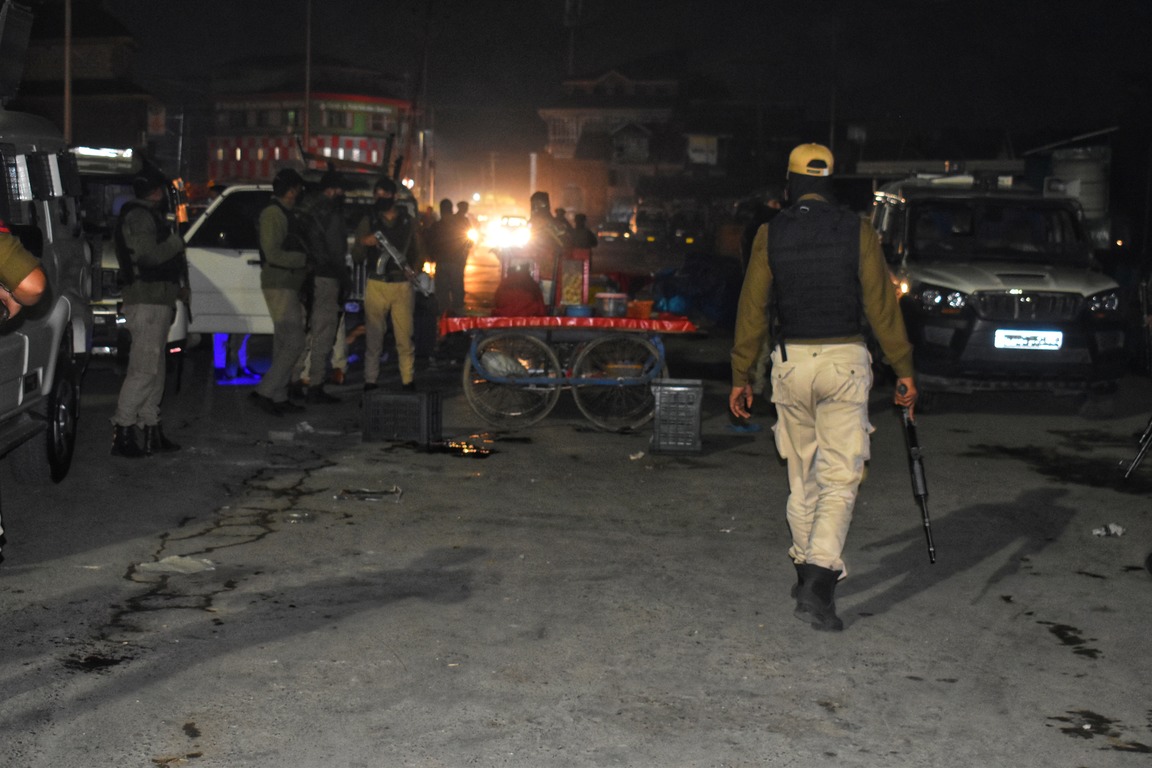 Security forces at the site of the killing in Srinagar. Photo: Faizan Mir

Within 30 minutes of the Srinagar attack, violence struck again, this time in south Kashmir where a carpenter from Uttar Pradesh was shot in Litter area of Pulwama district.

“#Nonlocal labourer Shri Sagir Ahmad of Saharanpur, UP who was #critically injured in a #terror attack in Pulwama, also #succumbed to his injuries. Search operations are in progress. Further details shall follow,” J&K Police said on Twitter.

The fresh spate of attacks evoked anger and condemnation in Kashmir. Former J&K chief minister Mehbooba Mufti wrote on Twitter: “Strongly condemn today’s attack on a street vendor who sadly succumbed. Such unfortunate incidents only reinforce the immediate need to reach out to the people of J&K by initiating a constructive dialogue.”

Strongly condemn today’s attack on a street vendor who sadly succumbed. Such unfortunate incidents only reinforce the immediate need to reach out to the people of J&K by initiating a constructive dialogue.

“An innocent civilian on his way home to his wife & kids, a non local street vendor eking out a living or troops in Poonch .None of these people deserved to die. One wonders what will it take for GOI to realise that its policies have been a monumental failure in J&K & at what cost?” she said in another tweet.

An innocent civilian on his way home to his wife & kids,a non local street vendor eking out a living or troops in Poonch.None of these people deserved to die. One wonders what will it take for GOI to realise that its policies have been a monumental failure in J&K & at what cost?

Strongly condemn the killing of Sageer Ahmed in Pulwama today. Another man who came to the valley in search of an income, in this case as a carpenter. His death in the 2nd terror attack today is a grim reminder of the precarious security situation in Kashmir these days.

Strongly condemn the killing of street vendor Arvind Kumar in a terror attack in Srinagar today. This is yet another case of a civilian being targeted like this. All Arvind Kumar did was come to Srinagar in search of earning opportunities & it’s reprehensible that he was murdered

The latest spate of targeted attacks have taken place at a time when J&K Police have launched a massive crackdown in Kashmir, detaining hundreds of people, most of them youngsters, on unspecified charges.

Last week, a senior police officer had told NDTV that the detentions have been made to “break the chain of attacks” by militants, which seems to be directed at the local as well as non-local minorities residing in Kashmir.

While those detained have been accused of stone-pelting or links with separatist or militant groups, no fresh charges have been pressed by police against them, raising questions about the legality of the detentions, especially when the detainees have got bail from courts in previous cases.

However, J&K Police has defended the crackdown, saying that those detained in Kashmir – some reports have put the number at more than 1,000 – are “overground workers” of militant groups.

But the attacks in Srinagar and Pulwama on Saturday underscore that the detentions may have had little effect on the operational capabilities of militants who seem to have launched a campaign to terrorise non-locals residing in the Valley.

Security agencies have described the latest killings in Kashmir as “hybrid warfare” by militants who are allegedly using their overground networks to take out “soft targets” by using small firearms.

On October 5, a prominent Kashmiri Pandit chemist, Makhan Lal Bindroo, was shot dead near his clinic, barely hundred metres from a police station in the heart of Srinagar city. Later in the evening that day, a street vendor from Bihar, Virender Paswan, was killed in Srinagar’s Lal Bazar locality. Within 36 hours, suspected militants struck at a government run school in Srinagar’s Eidgah locality on October 7, killing Supinder Kour, the female principal of the school and Deepak Chand, a teacher at the school.

Inspector General of Police (Kashmir) Vijay said on Saturday that 13 militants have been gunned down by security forces in Kashmir this month with two of them believed to be involved in the recent civilian killings.

Three of the slain militants are from Srinagar city which has seen a revival of militancy in recent months. “13 #terrorists killed in 9 #encounters after civilian killings. We have #neutralised 3 out of 5 terrorists of Srinagar City within less than 24 hours: IGP Kashmir,” Kashmir Police Zone tweeted.

A majority of the civilian killings have been claimed by The Resistance Front, which was founded by Abbas Sheikh, a recycled militant from Kulgam, after the Union government read down the special status of Jammu and Kashmir. Abbas was gunned down by security forces earlier this year.

However, the killing of Virender Paswan, the street vendor from Bihar, was claimed by the Islamic State which also released a video of the attack through its official news agency Amaq.

These attacks are taking place at a time when the security climate has significantly deteriorated both in the plains as well as the hinterland of Kashmir.

A group of infiltrators is believed to have managed to sneak into this part of Kashmir and is giving a tough fight for the past couple of months to security forces in Dera Ki Gali, in the upper reaches of Poonch where the encounter is underway.