A CRPF convoy was on its way to Srinagar from Jammu when a Jaish-e-Mohammad militant rammed an SUV laden with explosives into the bus carrying jawans.

Srinagar: In the deadliest attacks by militant on security forces in Kashmir, at least 49 Central Reserve Police Force personnel were killed when a suicide bomber rammed his car, laden with explosives, into the CRPF convoy on the Srinagar-Jammu highway on Thursday.

Militant outfit Jaish-e-Mohammad has claimed responsibility for the attack that also left over three dozen troopers injured. “The death toll in the yesterday’s attack on the CRPF has risen to 49,” reported local news agency GNS, though the IG CRPF Zulfikar Hassan said the number of casualties was 40.

While CRPF officials have been tightlipped about the attack, a senior police official from south Kashmir said that at least 41 jawans were killed. “Many more jawans are injured, some of them serious. We are collecting the details,” the official said.

“The number of casualties is expected to rise,” another police official said, adding that the injured were evacuated to the Indian Army’s 92-base Hospital at Badami Bagh cantonment in Srinagar. According to the official, more than 20 injured CRPF troopers were being treated at the army hospital.

The attack took place at around 3:20 pm when an SUV laden with explosives rammed into one of the bus in the CRPF convoy, which was on its way to Srinagar from Jammu, near Lethpora area in Pampore town.

There were more than 70 vehicles in the convoy, ferrying over 2,500 CRPF personnel, from 12 different battalions. “Two of the buses carrying the soldiers were the target,” the police official said, adding that the bomber is believed to have hit the CRPF bus from one side.

The explosion reduced the bus, which was ferrying 42 soldiers, to a mangled heap of iron – some of the pieces had been thrown across the road divider due to the impact. The details of the slain CRPF men showed one among them belonged to Rajouri district of Jammu. While all the 42 CRPF men travelling in the bus were killed, seven of the injured troopers in the second bus, which also bore the impact of the explosion, succumbed since yesterday, said the news agency.

Initial pictures of the scene showed body parts strewn around the area and belongings of the troopers thrown at a longer distance. The attack is a “serious security breach” since the heavily guarded highway is always sanitised before any major movement of troops, said the police official.

It took place less than two weeks after Prime Minister Narendra Modi, in his speech in Srinagar, said the government would give befitting reply to militants and “break the backbone” of militancy in Kashmir.

At the scene of the attack, patches of the road have been ripped apart due to the explosion, resulting in formation of number of craters. According to some media reports, the car was laden with 350 kg of explosives when it hit the CRPF bus.

A resident of Lethpora, who is into saffron business, said the explosion was so powerful that it shook the entire area. “There was a loud bang and then the entire area shook…all structures shook from their base. For a moment I thought it was the end,” he said.

Another local, a student, said the blast created such a panic in the area that people were seen crying and wailing and running for the life. “At the spot the scene was horrifying. Body parts like limbs were scattered all around. We saw forces personnel collecting the body parts and belonging of the troops from the road,” said the student.

According to an elderly man some CRPF personnel came running out of the vehicles after the explosion and took refuge in nearby residential houses. “It was a frightening scene,” he said.

The entire spot – more than half a kilometre of the road stretch – has been sealed and traffic has been diverted to new highway. A team of the National Investigation Agency is arriving in Kashmir today to assist the J&K police in forensic evaluation of the scene of the attack.

Thursday’s is the deadliest ever attack on security forces since the eruption of militancy in the J&K in 1990s. In October 2001, at least 38 persons including civilians were killed when militants triggered a car bomb outside Legislative Complex on the banks of the Jhelum river in Srinagar.

The attack is also the biggest in terms of casualties that CRPF has suffered in the Valley in recent years. Prior to it, eight paramilitary troopers were killed when Lashkar-e-Tayyabba (LeT) militants attacked a six-vehicle convoy of the CRPF in Pampore, which was returning from firing practice in Lethpora. At least 22 troopers were injured in the attack.

Was waiting for a year: Bomber 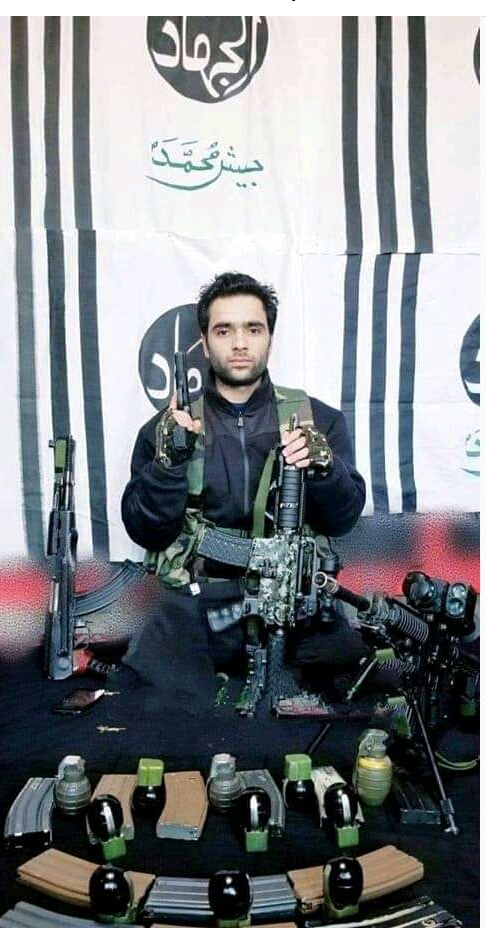 Screenshot of the video of Adil Ahmad.

In a statement to local news agency GNS, Pakistan-based JeM, headed by Masood Azhar, said that the outfit’s fidayeen militant was driving the explosives-laden car. It identified the suicide bomber as Adil Ahmad alias Waqas Commando of Gundi Bagh in Pulwama.

Barely an hour after the attack, a video surfaced on social media in which 19-year-old Ahmad says he had joined the fidayeen squad of the outfit almost a year ago.

“After one year of wait the day has come for me to fulfil my wish, for which I joined them (JeM),” he says, wearing army fatigue, with an automatic rifle in his hand and ammunition spread on the floor in front of him.

Then, in the over-ten-minute video, Ahmad, speaking in chaste Urdu, praises the people of Kashmir, particularly the youth, for remaining “steadfast on the path of freedom despite immense suffering”.

“By the time this video is out, I will be enjoying myself in heaven,” he says.

Warning “Hindustan” of “further misery” he talks about various attacks carried by the militants in the past. “We have given you enough pain during the IC 814 hijacking, Nagrota camp killing (in Jammu in 2016). From Pathankot airbase attack to Pulwama police line to the BSF camp attacks, we have continuously proved ourselves and now we are stronger than before. Do not think that we will get weakened by deaths of our few commandos. It makes us stronger.”

A police official from Pulwama said Ahmad, a class 12 dropout, had joined militancy in March last year. “The attack has been meticulously planned. There are more than a dozen villages that connect to the highway in the area. It seems the attack has been planned in the nearby areas,” the official said.

The attack was the second one carried by the JeM on security forces in Kashmir in the past 13 months. On December 31 last year, the outfit launched a predawn fidayeen attack on CRPF’s training-cum-induction centre at Lethpora, killing five troopers.

All three attackers, including 16-year-old Fardeen Ahmad from Tral town in Pulwama, were killed in the subsequent gunfight. It was the first attack of its kind in the Valley, involving mostly Kashmiri militants.

The last time a suicide bomb attack was carried out in Kashmir was in April 2000, when a militant from Srinagar, Afaq Ahmad Shah, blew himself up at the entrance gate of the army’s 15-corps headquarter at Badamibagh in the summer capital, using an explosives-laden car. Two soldiers were killed in that attack.

Prime Minister Narendra Modi termed the attack a despicable and dastardly act. “I strongly condemn this dastardly attack. The sacrifices of our brave security personnel shall not go in vain,” he tweeted.

While Union home minister Rajnath Singh is likely to visit Kashmir today to assess the situation, J&K governor Satya Pal Malik has ordered the immediate enhancement of surveillance and review of security management of all important installations and establishments in the state.

“Visibly it seems to be guided from across the border as Jaish-e-Mohammad has claimed the responsibility,” the governor said.

All mainstream parties of J&K condemned the attack, calling it a cowardly act. “Terrible news coming from the valley. A number of CRPF soldiers are reported to have been killed & injured in an IED blast. I condemn this attack in the strongest possible terms. My prayers for the injured & condolences to the families of the bereaved. #Kashmir,” tweeted National Conference vice-president Omar Abdullah.

“No words are enough to condemn the gruesome terror attack. How many more lives will be snuffed out before this madness ends?” tweeted PDP president Mehbooba Mufti.