Visuals on BBC and Al Jazeera showed a crowd of several thousand, but the Union home ministry denies there had been any large-scale demonstration, only 'stray protests' involving 20 people. 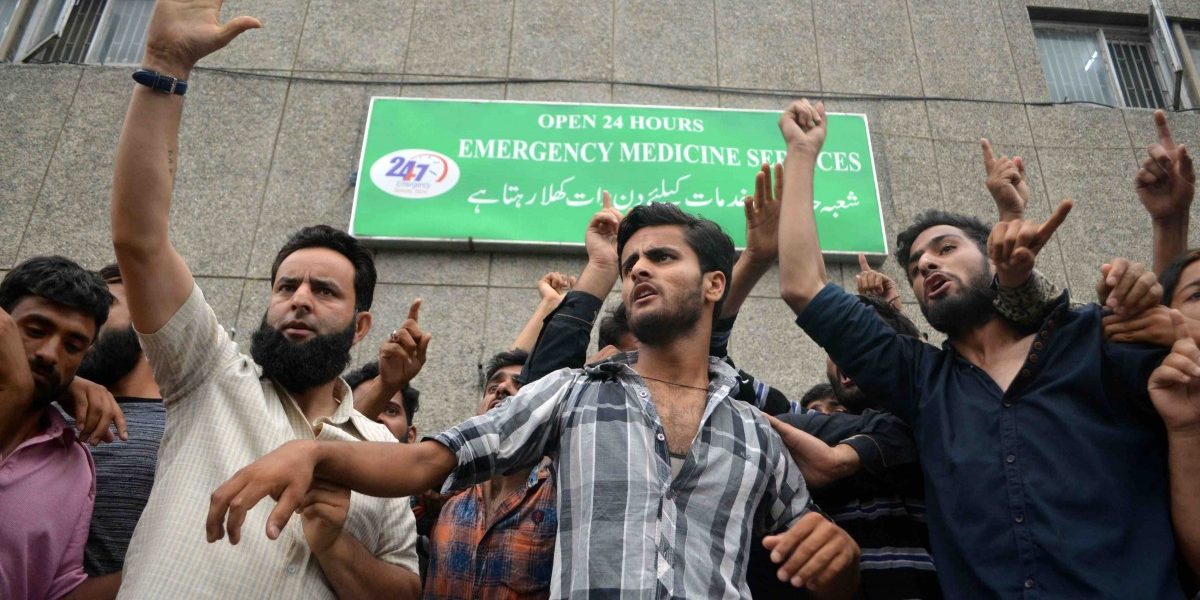 Demonstrators shout slogans outside a hospital emergency unit during a protest after the government scrapped special status for Kashmir, in Srinagar August 9, 2019. Photo: Reuters/Stringer

New Delhi: Protests took place in Kashmir on Friday afternoon amid heavy security presence, Reuters, BBC, the Washington Post and Al Jazeera reported, though the Union home ministry denied the news agency’s claims that a crowd estimated to be as large as 10,000 had taken to the streets in Srinagar.

On Saturday, the Union home ministry reacted with a statement calling these reports “fabricated and incorrect’.

A news report originally published in Reuters and appeared in Dawn claims there was a protest involving 10000 people in Srinagar.

This is completely fabricated & incorrect. There have been a few stray protests in Srinagar/Baramulla and none involved a crowd of more than 20 ppl.

Al-Jazeera, however, is sticking to its story. Kashmiri reporters familiar with Srinagar told The Wire the footage it showed looked like the Srinagar neighbourhood of Soura. The BBC has also uploaded footage that it says was shot there. These visuals belie the official government claim that there had been no large scale protest.

According to a Washington Post report, from Srinagar, the security forces told protestors to turn back. However, when they refused, troops resorted to pellet guns and tear gas. Eyewitnesses told the Post that at least eight people were wounded in pellet gun attacks on Friday.

“Some women and children even jumped into the water,” a witness told Reuters at Srinagar’s Sher-e-Kashmir Institute of Medical Sciences, where pellet victims were admitted. “They [the police] attacked us from two sides,” another protestor told the news agency.

Jammu and Kashmir has been under a lockdown and a blanket communication ban has been imposed since the Central government’s revoking of Article 370 – thus scrapping Jammu and Kashmir’s special status – and its bifurcation into two Union Territories – J&K and Ladakh.

Nearly 46,000 troops have been deployed in Jammu and Kashmir.

The Wire has reported that though the terms of the curfew have not been stated or defined formally, amid heavy security presence, there has virtually not been any movement with most parts of the city bearing a deserted look. The mobile and landline network remains shut and internet services have also been snapped. 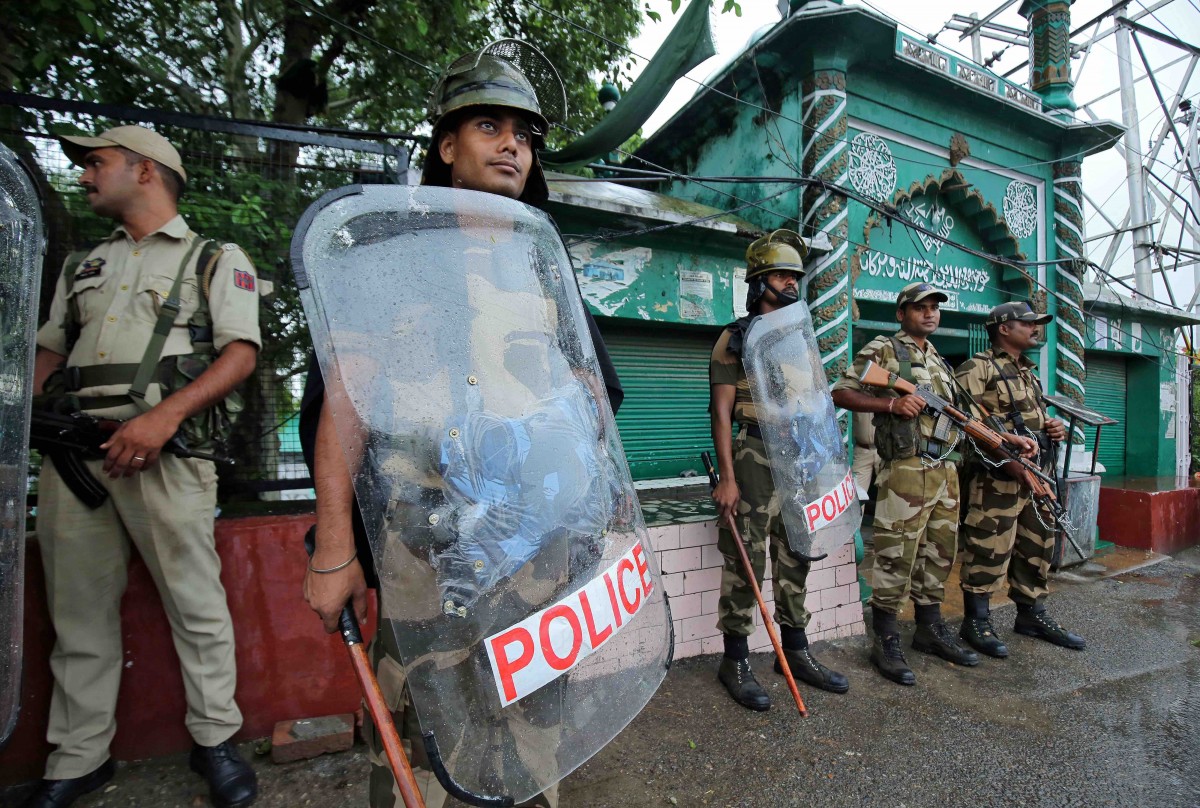 Indian security force personnel stand guard outside a mosque during restrictions following the scrapping of the special constitutional status for Kashmir by the government, in Jammu August 9, 2019. Photo: Reuters/Mukesh Gupta

The government-imposed clampdown on movement and the snapping of all means of communication has fuelled anxieties among residents. On the basis of conversations reporters  have had with ordinary people in various neighbourhoods of Srinagar, it is evident that anger over the Modi government’s decision runs deep.

While some restrictions on movement were eased on Friday to allow people in Kashmir to offer prayers, the security restrictions were all put back in place – in south Kashmir, north Kashmir and parts of Srinagar – following the protests, Al Jazeera reported.

A police official told Reuters that 10,000 people attended the protest, first gathering in the Soura area and then being pushed back to the Aiwa bridge. In order to quell protestors, security forces have resorted to firing live bullets in the air and have used tear gas and rubber-coated steel bullets, according to Al Jazeera.

The Wire‘s ground report from Srinagar has confirmed the use of pellet guns by forces over the last several days, resulting in nearly two dozen young men and boys being admitted with pellet injuries to SHMS hospital – belying official claims that the situation on the ground remains “calm”.

The Wire met with some of the victims and their families in Ward No. 8 of the SMHS hospital in Srinagar on August 8. Some said they were shot during protests in the city’s downtown area while others said they were targeted by the security forces even though there was no protest or stone pelting going on at the time.

Note: This story has been edited to note the MHA’s denial of the Al-Jazeera and Reuters reports. We will further update the story further when more details are available.