“He assured us that he will take up the matter with Delhi. He told us there was nothing to worry about,” Mehbooba said after meeting the governor. “But, to be honest, we are not satisfied with his assurance.” 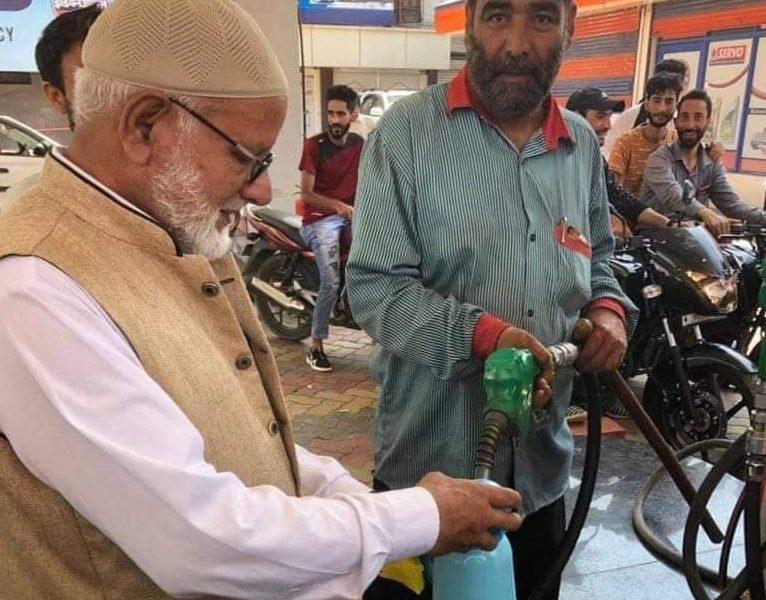 A man in Srinagar stocks up on petrol, filling even small containers. Credit: Special Arrangement.

Srinagar: Amidst a heightened sense of panic across the valley following the government’s call for tourists and Amarnath yatris to leave the state immediately, two former J&K chief ministers met governor Satya Pal Malik on Saturday to seek assurances on the unfolding situation. But both the ex-CMs, Mehbooba Mufti and Omar Abdullah, have returned disappointed from Raj Bhavan.

From top security officials to politicians and senior administrators, those who hold key positions in Kashmir say they have no clue about what is in the offing. The Valley has plunged headlong into a sea of rumours, largely due to the silence maintained by the Centre.

Bureaucrat-turned-politician Shah Faesal has cautioned that the state is facing an “existential threat” while People’s Conference chairman Sajad Lone believes that “the issue at stake is bigger than all of us put together”.

At the same time the leaking of scary government orders and advisories – from troops’ build-up to forcing Yatris and tourists out of the Valley, from shutting down college hostels to cancelling leaves of doctors and on ordering stocking of food grains – has led to a frenzied atmosphere. Across Srinagar, people were seen filling up on petrol.

“I have so many questions and not a single answer. I’ve met people today who occupy important positions to do so with J&K, not one of them was able to tell me anything and I’ve been CM for 6 years,” a tweet by Omar noted.

“Imagine the plight of your everyday Kashmiri who doesn’t know what to believe,” he added.

Addressing the media this afternoon after meeting the governor, Omar said the advisory asking tourists and yatris to leave the Valley has frightened every Kashmiri and led to a deterioration of the situation.

He talked about apprehension among people related to reports that Centre might abrogate Article 35A or Article 370 and delimitation of Assembly segments. “Yesterday, people even talked about rumours about trifurcation of the state,” he continued.

Though Omar said the governor assured him there was no such plan being acted upon, it is the silence maintained by Modi-led government that has all of Kashmir restive, including the mainstream camp.

The former chief minister didn’t mince words to express his unease. He asked the Centre to come up with a statement on Kashmir in parliament.

Referring to the recent meeting of the National Conference delegation led by Farooq Abdullah with the prime minister, Omar said the PM too talked about the statement that was given by the governor that there will be no tinkering with Article 35A.

In fact, Omar revealed, the prime minister said his government wants to conduct elections in J&K. “We came out of the meeting satisfied….But I wasn’t expecting such an advisory within 24 hours (asking yatris and tourists to leave Valley), because we didn’t get any indication from the prime minister. That is why we want to hear from the government of India about Kashmir, in parliament,” Omar insisted.

It’s easy to accuse us of spreading fear but no one is bothering to tell the people what is happening so how do you expect that fear won’t be a natural result of this situation that has been allowed to fester?

Then referring to J&K’s special status, Omar went on to say that the promises which were made with the people of J&K at the time of accession were not time bound. “They have to be kept till we are alive,” he insisted.

Barely a few hours after Omar met the governor, Raj Bhavan issued a statement which quoted the governor as saying that the state has no knowledge of any changes to J&K’s constitutional provisions.

The statement is in contradiction to the “assurances” some mainstream leaders have talked about having received from the governor that there will be no tinkering with Article 35A, a constitutional provision which defines J&K’s state subjects and grants them exclusive rights over property and government employment.

In his presser, Omar too had said that the governor had assured him there was no such plan being acted upon to tinker with Article 35A.

“The state has no knowledge of any changes to constitutional provisions. Therefore, no panic should be created by unnecessarily linking this security matter with all kinds of other issues,” the  Raj Bhavan statement said, appealing to people to maintain clam.

Late on Friday night when Mehbooba Mufti led a delegation of leaders mainstream parties including her opponents – Sajad Lone and Shah Faesal – to Raj Bhavan, she was more direct in her response about assurances given by the governor.

“He assured us that he will take up the matter with Delhi. He told us there was nothing to worry about,” Mehbooba said. “But, to be honest, we are not satisfied with his assurance.”

Prior to the meeting she drove to the residence of Farooq Abdullah and then met Lone and Faesal at the PC chairman’s Church Lane residence, in an attempt to forge unity among mainstream parties at a “very critical juncture” in history of J&K.

“Yet again the Valley is on the edge. It’s a travesty that central government hasn’t made efforts to reach out & clarify recent development,” she tweeted today.

What about Kashmiris? Who will protect their lives? Are they cannon fodder? https://t.co/XPOlwnjaUG

The PC chairman too talked about the “dire need” for the Centre to clear the air pon what was happening in Kashmir. “It is strange we the inhabitants of the land don’t have the remotest idea of what is going to happen,” he tweeted later.

Following the state home department advisory on Friday, tourists who had gone to Gulmarg and Pahalgam were evacuated from their hotels and ferried to Srinagar in state-run buses.

“There are clear directions from the government that no tourist should stay back in our hotels,” one hotelier from Pahalgam told the Wire.

A senior government official said arrangements have been made to ensure that all tourists and yatris are moved out of Kashmir.

Since late Friday evening, several other government orders have deepened the uncertainty in Kashmir. One such order asked the administration of hospitals in north Kashmir to cancel the leave of all doctors, stock fuel for ambulances and keep doctor teams on stand-by mode.

The National Institute of Technology (NIT) at Hazratbal suspended classes and closed down its hostels. Students from outside the state have now started to return to their homes. Similarly, Kashmir polytechnic college in the city too has asked borders to vacate the hostel.

This uncertainty has now brought almost the whole of Kashmir out on the streets for panic buying. Long queues of customers were seen throughout the day outside grocery shops to stock up on essentials as rumours are gaining ground that situation might worsen and the Valley will be locked down for a longer period of time.

There was a huge rush of people outside ATMs and filling stations across Kashmir since yesterday evening. At many places, people complained about ATMs running dry. In Srinagar, petrol pumps were shut down as owners feared a law and order situation owing to massive rush of customers.

“Nobody knows what is going to happen. So it is better to make all preparations,” said Abid Aleem from uptown Barzulla.

Since July 25 the Union home ministry has cleared the deployment of 35,000 additional troops to Kashmir. Besides, there are already additional 40,000 troops in the region who had been deployed for the Amarnath Yatra. Last year the Centre had sent 200 companies of additional paramilitary troop to Kashmir for election duty.

For Muzaffar Hussain who, along with his son, had driven to the city centre in Lal Chowk to purchase essentials, the troops’ build-up was worrisome. “What do they (the Centre) require these additional troops?” he asked. “They are creating a war like situation.”

“Kashmir is in the midst of an unprecedented situation and people deserve to know what the government is up to. This ‘everything is normal’ rhetoric is not acceptable.”