Currently in a hospital in Srinagar and unable to speak, Feroz Ahmad Hajam has alleged that he was detained on September 5 and left for dead after being tortured for hours; the police claims he attempted to take his own life.

Srinagar: Justice is all I want, he wrote on a piece of paper in Urdu.

“My name is Feroz Ahmad Hajam. I was abducted by the Special Task Force (STF) of the Jammu and Kashmir Police,” he scribbled further before falling unconscious.

On September 6, the Jammu and Kashmir police said that Feroz Hajam, the son of Ghulam Rasool Hajam of Iqbal Pora Larnoo in southern Kashmir’s Anantnag district, had been detained for questioning the previous day on in connection with a case. They claimed that Hajam was suspected of being associated with the Jaish-e-Mohammad.

“During the course of questioning the suspect went to attend the nature’s call [sic] and while in the washroom attempted to take his own life by slitting his throat,” the police said in a statement. The police did not reveal the location where Hajam was being questioned.

Lying on bed number 32 in ward number 1 of SMHS hospital in Srinagar, surrounded by his two sisters, hajam is unable to move his body or speak. Asked what happened, he reaches for a notebook and writes: “I want justice… Justice is all I want.”

His family said that Hajam was found near Nodura camp in the Dooru area, 20 kilometres from Anantnag town on the afternoon of September 6.

Responding briefly to questions written in Urdu, Hajam said that on the morning of September 5, at around 10 am, he was on his way to Kulgam to meet a customer who had purchased some readymade clothes from him. Feroz’s brother, Tariq Ahmad Hajam, said that the man owed them Rs 50,000. The Hajams own a small loom in Anantnag where they manufacture trousers and shirts.

Hajam said that near Khanabal, he was stopped by two people who were armed but were in plainclothes. The men immediately called a few more people who were in police uniform and bundled him into a police vehicle.

He was driven to the Joint Interrogation Centre (JIC) a kilometre away. Feroz said that at the JIC, his hands were tied behind his back. “I was beaten. I was kept naked. I was tied to a rope and a roller was run over me.” 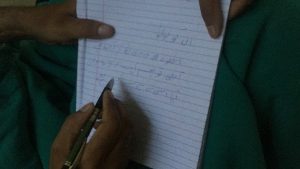 While Hajam was writing answers in bits and pieces to questions, he suddenly fell unconscious. One of the doctors attending Feroz told The Wire that this was due to low blood oxygen levels. “Since the patient says that a roller was run over him, it will have an impact on his heart. Besides, he recalls the torture.”

Feroz’s sister said that after the “roller torture” he fell unconscious at the JIC. Feroz has narrated the whole incident to his family in writing.

She said that after he regained consciousness, the police stubbed cigarette on his shoulders. “There are severe burn injuries on his back,” Feroz’s sister said.

“I was tortured for two hours again during which I was beaten, the roller was run over and I was subjected to electric shocks,” Feroz said.

After torturing him for several hours, Feroz said that he was driven from the JIC to Kapran camp, a military garrison located over 30 kilometres south of Anantnag.

At Kapran, Feroz said that a policeman came to him, handed him some clothes and asked him to change. “It was an army uniform,” Feroz’s sister quoted him as having told them.

After putting on the uniform as directed, Feroz was blindfolded. “My hands and feet were tied,” Feroz said.

“The policeman then pushed me on my back and with a sharp knife cut my throat,” Feroz said, “I fell unconscious.”

While the police maintain that Feroz attempted suicide in the washroom, his family said that Feroz’s supine body was found with his throat slit at Dooru near Nodura army camp. “The numberdar of our village informed us that the body of Feroz has been found near Nodura camp,” Feroz’s sister said. 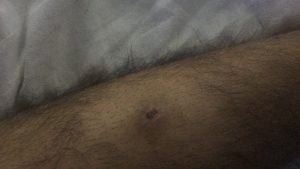 In Srinagar, the doctors treating Feroz said that given the nature of the injuries on his body, it appeared that he had been tortured. Credit: Muhammad Raafi

Tariq said that the army had informed the local police station that a body was lying outside their camp. “The police sought an ambulance and Feroz’s half-dead body was brought to the district hospital in Anantnag,” he said.

A doctor at the nearby Verinag hospital said that a police officer from Dooru called and asked them to bring an ambulance to the nearby army unit of 19 RR based at Nadura village.

“As we reached the camp we found the man lying there with his throat slit. We took the patient to Mir Bazar, where a critical care ambulance was waiting to take him to the district hospital Anantnag for treatment,” the doctor said.

A doctor who treated Feroz in Anantnag district hospital said, “He had cuts near his throat, his trachea was damaged and he was gasping for breath.”

The station house officer Dooru, Showkat Ahmad Khan, confirmed to The Wire that Hajam was shifted from the 19 RR camp.

At the Anantnag hospital, Feroz was given immediate medical aid. He was later shifted to SMHS hospital in Srinagar. 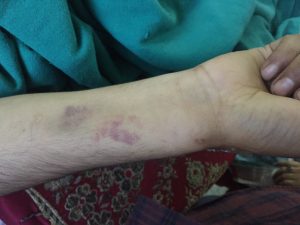 In Srinagar, the doctors treating Feroz said that given the nature of the injuries on his body, it appeared that he had been tortured.  “As far as the cut throat injury is concerned, it is so deep that even thyroid cartilage is cut which can never be [the result of a suicide attempt]. The cut is deeper on the right side than left and extending right upto the angle of right mandible. From a forensic point of view it is homicidal in nature and can never be suicidal.”

Asked whether Feroz would be able to speak again, the doctors replied in negative. “It is likely that Feroz will not be able to talk again as nerve supply is cut and the wound is too deep to leave the laryngeal nerve supply untouched.”

While the police said that Feroz is a Jaish suspect, he and his family refute the charges. “There has never been even a single FIR against my brother,” his sister said. “The police is lying, they are putting out a fabricated story.”

However, he refused to divulge further details about the case. “For investigation purposes, I cannot reveal the case details,”  he said.