'She Wasn't an Informer,' Says Family of Kashmiri Woman Executed on Video 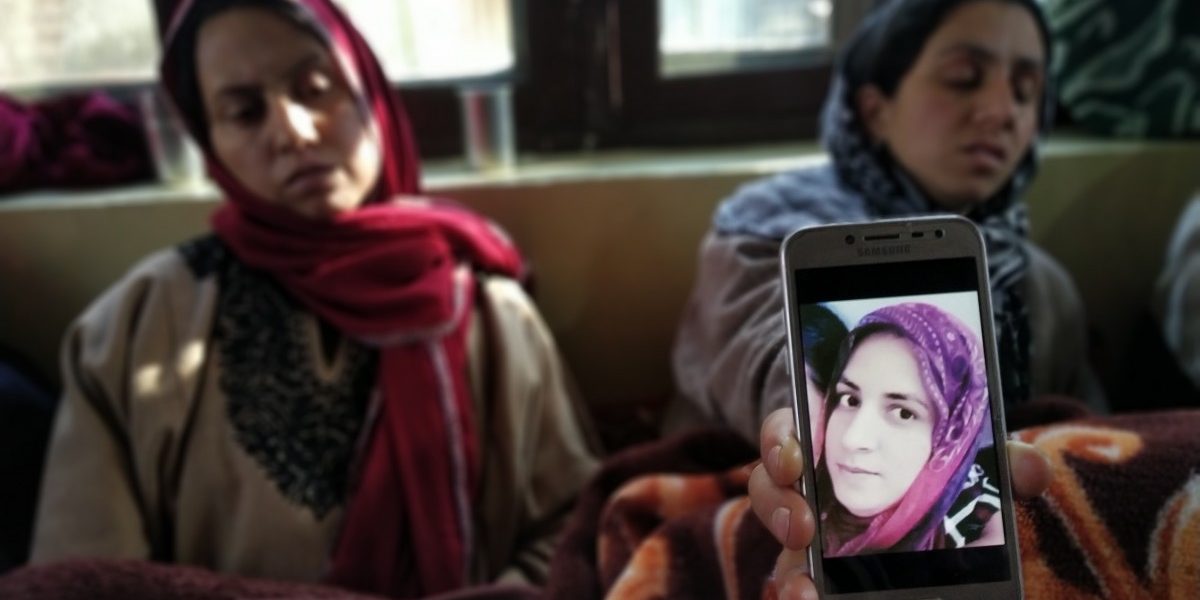 Ishrat's family members hold up a photograph of her.

Srinagar: Late at night on January 31, a video of pheran-clad young woman being shot at point-blank range went viral on social media in Kashmir, sending shockwaves across the Valley.

In the 10-second video, a woman sitting on her toes, with a black backpack hanging on her right shoulder, is seen folding her hands and seeking mercy before an unknown gunman. The gunman then shoots her, and the woman falls. Within seconds, the gunman shoots again.

The next morning, the woman was revealed to be 22-year-old Ishrat Muneer Bhat, a resident of Dangerpora in south Kashmir’s Pulwama district. Her bullet-riddled body was found in Sugan, Draggad village, Shopian district, around 27 km from her hometown.

Ishrat has completed her BA last year and was pursuing a masters in sociology at the Indira Gandhi National Open University (IGNOU). She was also taking a computer training course at a nearby institute.

Also read: Poem | I Bury Them Under the Witnessing Yellow of the Chinar

When Ishrat did not come back on time, her family called her number multiple times. Her phone was switched off.

“We informed our brothers about Ishrat, and they came quickly from their shop,” said Arifa, with tears in her eyes.

One of her brothers, Javaid Ahmad Bhat, went to look for Ishrat at the computer institute, but it was closed. The family called their neighbours, relatives, friends and later the police, but there was no trace of Ishrat.

According to the family, Ishrat may have been abducted on her way to the computer institute. “We spoke to her friends. They hadn’t seen Ishrat at the institute that day,” said Arifa. 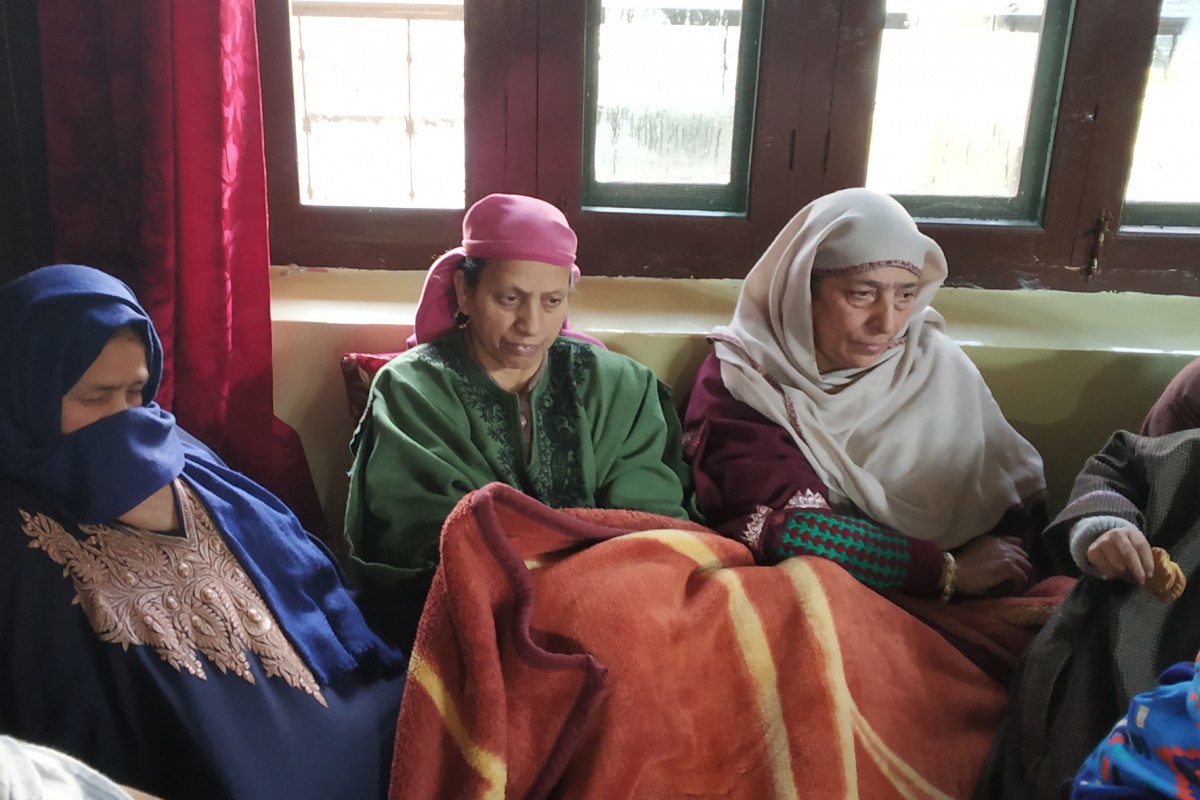 The family could not sleep, as everyone paced around the house waiting for news about Ishrat. The authorities had shut down internet connectivity that day in Pulwama in the wake of a gun battle between militants and security forces, so the horrific viral video did not reach Ishrat’s family. They found out the next day that she had been shot dead.

“We could have recognised our daughter in the video if the internet was not shut in our area,” said 63-year-old Gulshana Banu, Ishrat’s mother.

Ishrat’s father, 65-year-old Muneer Ahmad Bhat, is an assistant sub-inspector in the Jammu and Kashmir police, her eldest brother Showkat Ahmad Bhat is a constable and her two other brothers, Javaid and Ishfaq, are shopkeepers.

Ishrat’s cousin Zeenat-ul-Islam was a commander of the Al-Badr militant group. He was killed on January 13 in an encounter with government forces in Yaripora, Kulgam district, along with his associate.

Islam was a resident of the village where Ishrat’s body was found.

“We were informed by our aunt’s family about Ishrat the next morning,” said Rehana, Ishrat’s other sister. “Her body was brought to Zainpora police station, from where it was referred to Pulwama hospital and then ferried to home.”

Ishrat’s body had two bullets wounds – one on her face and the other on her back.

When her family received the body at home, hundreds of mourners had gathered to participate in her funeral. Murmuring about why she was killed could be heard everywhere. 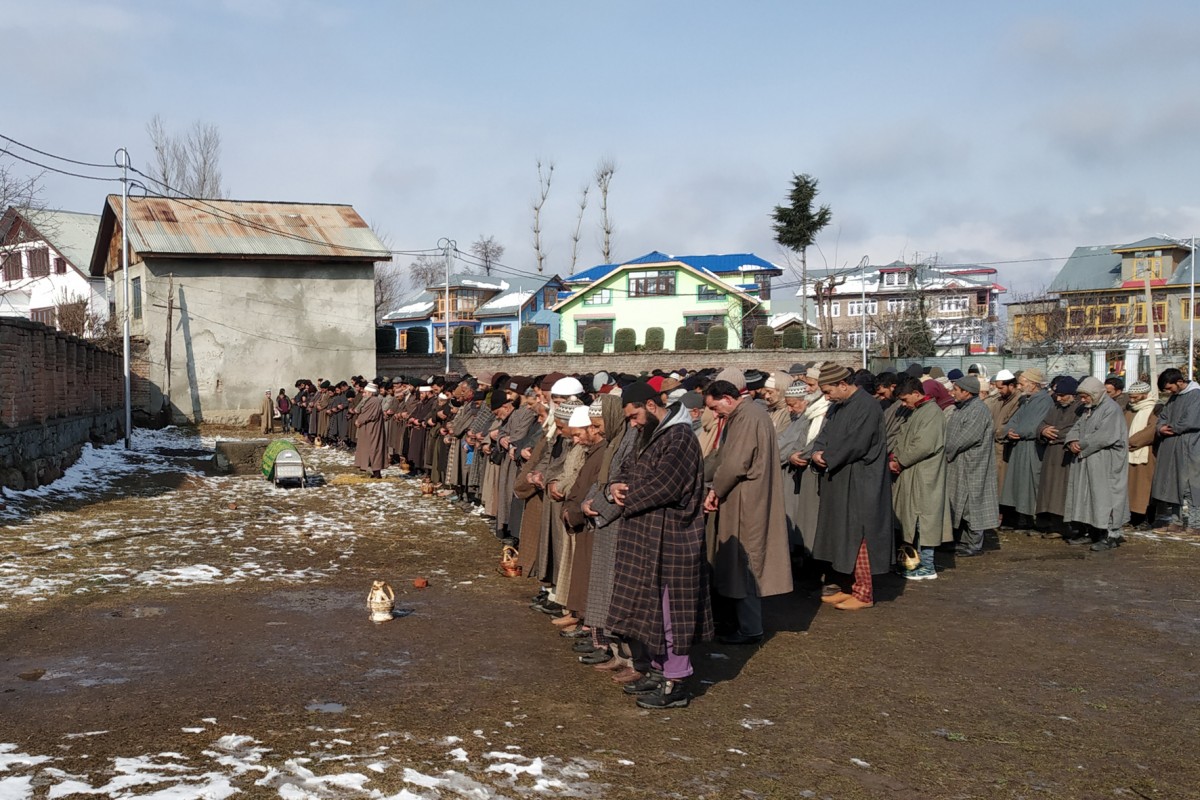 “We can’t say who killed her. Anything is possible in Kashmir. Killing a human being has become easy here,” said a mourner who did not want to be named. “We have been witnessing these unknown gunmen since 1989.”

When the Ishrat was being bathed, her maternal uncle Molvi Mohammad Amin said, “Ishrat was pious. She used to offer prayers and didn’t stop fasting. She couldn’t be a traitor or an informer. Don’t pay heed to false news.”

When Ishrat’s coffin, draped in green, was taken away, Gulshana cried in despair. “My beloved daughter, why did you leave us? Where are you going? I can’t bear your death,” she said, while others tried to console her.

“The girl left home for college. We can’t say who abducted her and later executed her. Among my relatives, I visited Ishrat’s home most. A sister who was craving to see her commander brother (Zeenat-Ul-Islam) when he was active couldn’t be an informer,” Hassan said. “If she was an informer, then it is a blot on our resistance, and those who executed her should give clear proof. But we are sure she was not an informer. It is my request to the administration to investigate the dreadful murder of Ishrat so that everything can become clear.”

The police called Ishrat’s murder a ‘gruesome act of terror’ in a statement. “The dead body of Ishrat was retrieved by police from Dragad area of Zainapora in Shopian district,” said the police.

“Terrorists while perpetrating this gruesome act made a video recording of the incident and circulated it on social media.”
A case has been registered under relevant sections of the law and an investigation initiated. “Police investigation is focused on some credible leads, and it is expected soon the culprits shall be brought before the law,” the police added.

In November 2018, militants released two videos of young Kashmiris – 17-year-old Nadeem Manzoor and 19-year-old Huzaif – being executed. The militants said the two were “informers”. However, no militant group has taken responsibility for killing Ishrat yet.

A room where Ishrat used to study is now packed with visiting mourners. “What was my daughter’s fault? She wasn’t an informer. She was the most affected in our family by the killing of her militant cousin, Zeenat-Ul-Islam,” said Gulshana.

All photographs by Aamir Ali Bhat.