India's Airstrike on Pakistan May Not Have Hit its Target

Something appears to have gone wrong in the targeting process – exactly what, however, remains unclear in the open-source evidence. 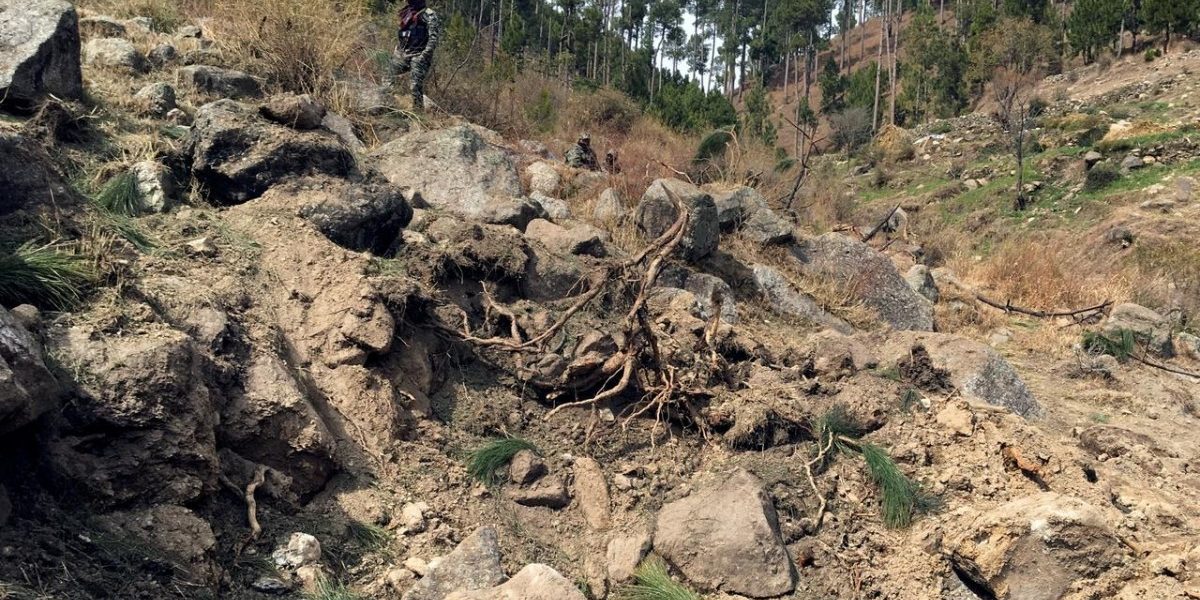 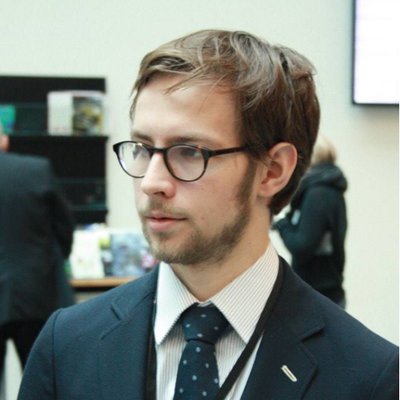 Indian fighter jets carried out airstrikes against targets inside undisputed Pakistani territory, but open-source evidence suggested that the strike was unsuccessful.

At around 3:30 am local time on February 26, a flight of 12 Mirage 2000 multi-role fighters reportedly attacked facilities of the terrorist group Jaish-e-Mohammad (JEM) near Balakot town in Mansehra District, Pakistan. Using open-source evidence, DFR Lab was able to geolocate the site of the attack and provide a preliminary damage assessment.

While most sources at the time identified the strike as taking place in the Pakistani town of Balakot, others located the strike at “Jaba Top,” a likely reference to a mountain top near the village of Jaba, about ten kilometres south of Balakot.

On the morning of February 26, after daybreak, a spokesperson for the Pakistan Armed Forces, Major General Asif Ghafoor, tweeted images from what he alleged to be the impact area of the Indian bombs.

Ghafoor claimed that the payload was dropped in a hurry and impacted in an open area. The immediate imagery seemed to corroborate the statement, as the photographs were taken in a wooded area and did not show any damaged structures.

Two photos included fragments from the ordinance supposedly dropped by the Indian fighter jets. One image contained what looked like a set of tail fins and another what appeared to be a component for the targeting system.

The most identifiable photo was of the fins, which closely resembled those on the Israeli-produced SPICE-2000 precision-guided munitions (PGM). SPICE uses INS/GPS coordinates for autonomous navigation and electro-optical seekers for target identification and terminal navigation. According to Rafael, the manufacturer of the SPICE series of PGMs, the electro-optical sensor matches the scene with pre-loaded imagery for accurate target acquisition and homing. 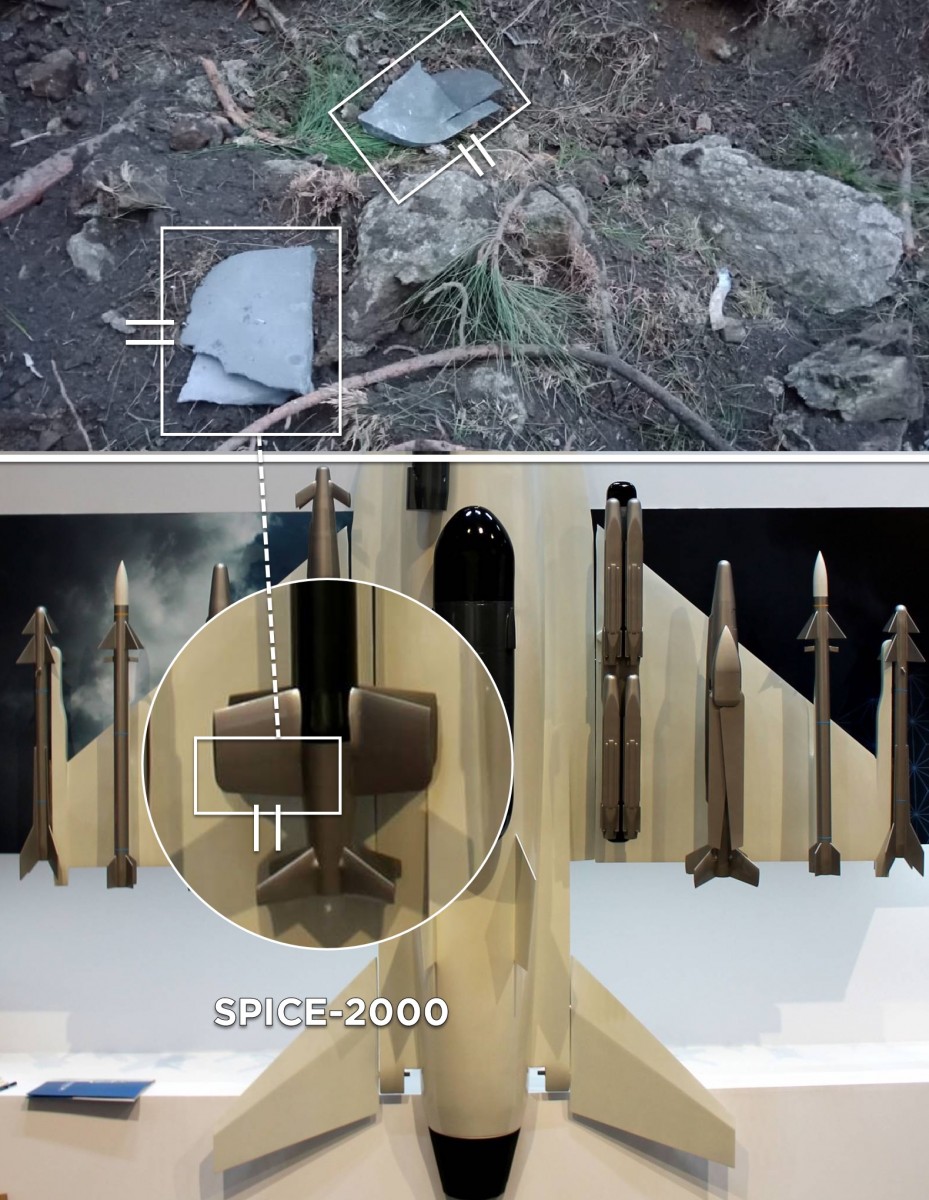 Bomb components compared against a mockup SPICE-2000 among other Rafael products mounted on an F-16 model during the 2017 Paris Air Show. Credit: AIN Online/archive

Initial reports stated that Mirage 2000s dropped 1,000-kilogram (approximately 2,000 pound) bombs on their targets, which is the same size as the SPICE-2000. This was corroborated by later reports, which stipulated that the SPICE-2000 was used in the strike. These munitions are compatible with the fighter jets, lending credibility to this assessment.

Location of the strike

In addition to the imagery posted by the Pakistan Armed Forces spokesperson, video footage emerged of the area near the strike, showing a second point of impact. The video showed locals talking about the strike and claimed that only one man received injuries as a result of being startled by the bomb blasts.

The only villager, injured due to shattered glasses of broken window is Durand Shah. Villagers saw the Indian empty shells on ground which failed to explode. There was no bomb. #BalaKot #IndianFailedStrike pic.twitter.com/RRZlVdOMEJ

The video posted on social media showed a valley similar to the one appearing in the video shared by the Pakistan Armed Forces spokesperson. A single cluster of buildings was visible on top of the mountain ridge. Imagery posted by Uppsala University Professor and UNESCO chair Ashok Swain on Twitter showed a closeup of this building, allowing for a clearer view of the area.

Overlap of closeup view and a still from the video footage, confirming that both images are from the same location. Credit: @shamajunejo/archive; @ashoswai/archive

Using this more detailed imagery, DFR Lab was able to confirm conclusively that this strike did, in fact, take place near Jaba Top. A comparison between tree clusters and the buildings visible in the imagery provided a positive match.

Comparison of satellite imagery and footage from the ground. Credit: Google Maps, @ashoswai/archive

Using this information, DFR Lab was also able to verify the initial imagery from the Pakistan Armed Forces spokesperson as being from the same location. In the graphic below, the video footage would have been taken from structure number two as marked in the satellite imagery and ground-level imagery. 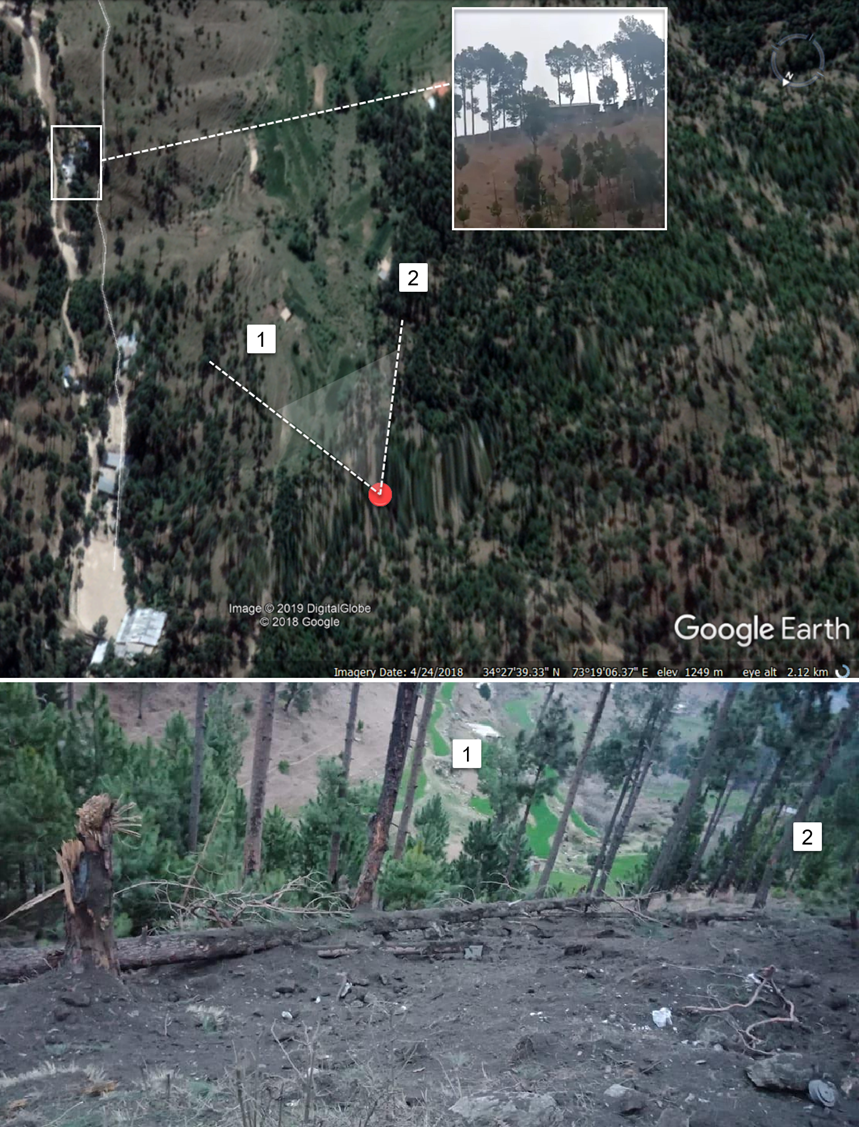 Retired Indian Colonel Vinayak Bhat seemed to agree with this assessment in an article written in the immediate aftermath of the attack, showing satellite imagery of the same location.

Additional footage of the targeted facility was released on Twitter. In one tweet, Asian News International (ANI) posted an image of what appeared to be a gate and guard post to the entrance of the facility. As Bhat also pointed out, this structure bore a high resemblance to a point along the road leading to the facility on satellite imagery.

The blue roof combined with the half roof covering the road and the side road on the right all contributed to a high-confidence conclusion that these structures were the same.

Another video from the main point of impact allowed DFR Lab to better survey the extent of the damage. The video showed a large patch of wooded area affected by the bombing, but no sign of damaged structures or personal injury.

This is where IAF dropped their bombs.
A dozen of ? killed.#Balakot pic.twitter.com/lg4aPj9qYj

Viewing satellite imagery from Planet, a small change in the affected area was visible, indicating the point of impact. Imagery from February 26 was not available, but a comparison from February 25-27 was possible, allowing for a reliable before and after comparison of the target location.

Satellite imagery of the target area before and after the attack. Credit: @DFRLab via Planet Labs

The change visible in the imagery indicated only impacts in the wooded area, with no damage being visible to the surrounding structures.

Using open-source evidence and satellite imagery, DFR Lab was able to confirm the location of the Indian airstrike to be near Balakot, rather than inside it, and firmly within Pakistani territory. The target was supposedly a JeM-led madrassa, but DFR Lab was unable to confirm that any bombs reached buildings associated with it.

Also read: Only India and Pakistan Can Solve the Current Crisis

The SPICE-2000 is a precision-guided bomb that should not miss its target by the approximately 100 metres that the impact craters were from the nearest structures. The autonomous nature of the SPICE-2000 adds mystery to why the bombs seemed to miss. Satellite imagery did not suggest that any damage was inflicted to nearby buildings. Vegetation and low imagery resolution could hypothetically obscure structural damage, but this remains highly improbable. Something appears to have gone wrong in the targeting process – exactly what, however, remains unclear in the open-source evidence.

DFR Lab will continue to monitor this situation as it develops.

This article was originally published on Medium.