How India Won the All-Important Battle of Pirgunj in 1971

It was the Pirgunj battalion's tactical roadblock that altered the strategic balance in the northwestern sector of East Pakistan. 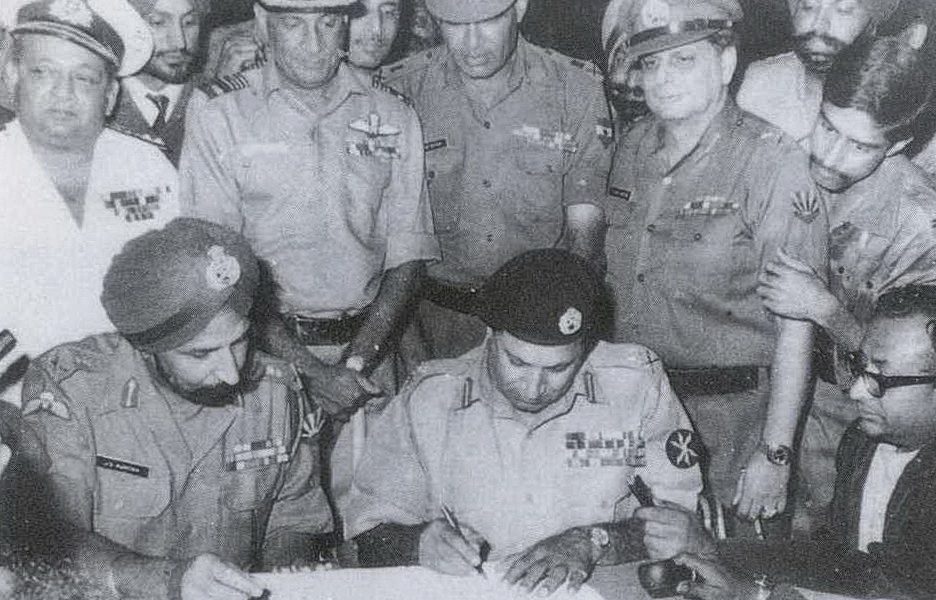 Fifty years ago, on December 16 at 4:55 pm at the Race Course in Dacca, Lieutenant General A.A.K. Niazi, commander of all military forces in East Pakistan, was hustled into signing the Instrument of Surrender. Niazi removed his belt and badges of rank and handed over his .38 revolver to his Indian counterpart, Lieutenant General Jagjit Aurora, General Officer Commanding, Eastern Command Calcutta.

Tears rolled down ‘Tiger’ Niazi’s cheeks, since the greatest indignity and shame of defeat in battle for a soldier was inflicted on the Pakistan Army. In a collapse of will, 93,000 Pakistani soldiers laid down their arms. For the first time in more than 1,000 years, India, the perennial sufferer of foreign conquest, tasted total military victory. The General Sam Manekshaw-led army, supported brilliantly by the air force, navy and the Bengali Mukti Bahini, enabled Prime Minister Indira Gandhi to inform a jubilant parliament that “The war is won. A new nation is born.”

That was India’s finest hour: Mrs Gandhi was catapulted into position of the greatest Indian leader of all times and Sam Mankeshaw transformed into the ultimate soldiers’ general, the country’s first field marshal and a national icon. The unique victory of 1971 marked the restoration of Indian pride and dignity, after a history of humiliating defeats and foreign subjugations. East Pakistan – a geographical incongruity, like Pakistan’s two-nation theory – was rectified.

Also read: Why a Former Navy Chief is Right to Say ‘Evil of Sycophancy’ Will Undermine India’s Military

For Pakistan, the defeat in East Pakistan was inevitable. The success of East Pakistan’s holding campaign lay in West Pakistan. India fought a defensive action in the west and sought a decisive outcome in East Pakistan. It was estimated that the cost of sustaining 10 million refugees from East Pakistan would outweigh the costs of fighting a war to return the refugees. The victory was facilitated by the help of Mukti Bahini and the local population, air superiority and the crucial politico-diplomatic support of the USSR, which used its veto in the UN Security Council to buy time for India so that the war did not end in a ceasefire but an outright surrender. For this to happen 4,152 soldiers were killed and 7,182 wounded.

The 13-day-long military campaign in 1971 was the first tri-service operation, which in speed of success was second only to the North Africa campaign in the Second World War. The liberation of East Pakistan was marked by many epic battles like the ones at Akhaura, Khulna, Jessore, Hilli, Bogra, the first silent khukuri attack at Atgram and the first ever heliborne operation in Sylhet. And, the pivotal battle of Pirgunj. The last three battles were fought by soldiers of the Fifth Gorkha Rifles regiment. 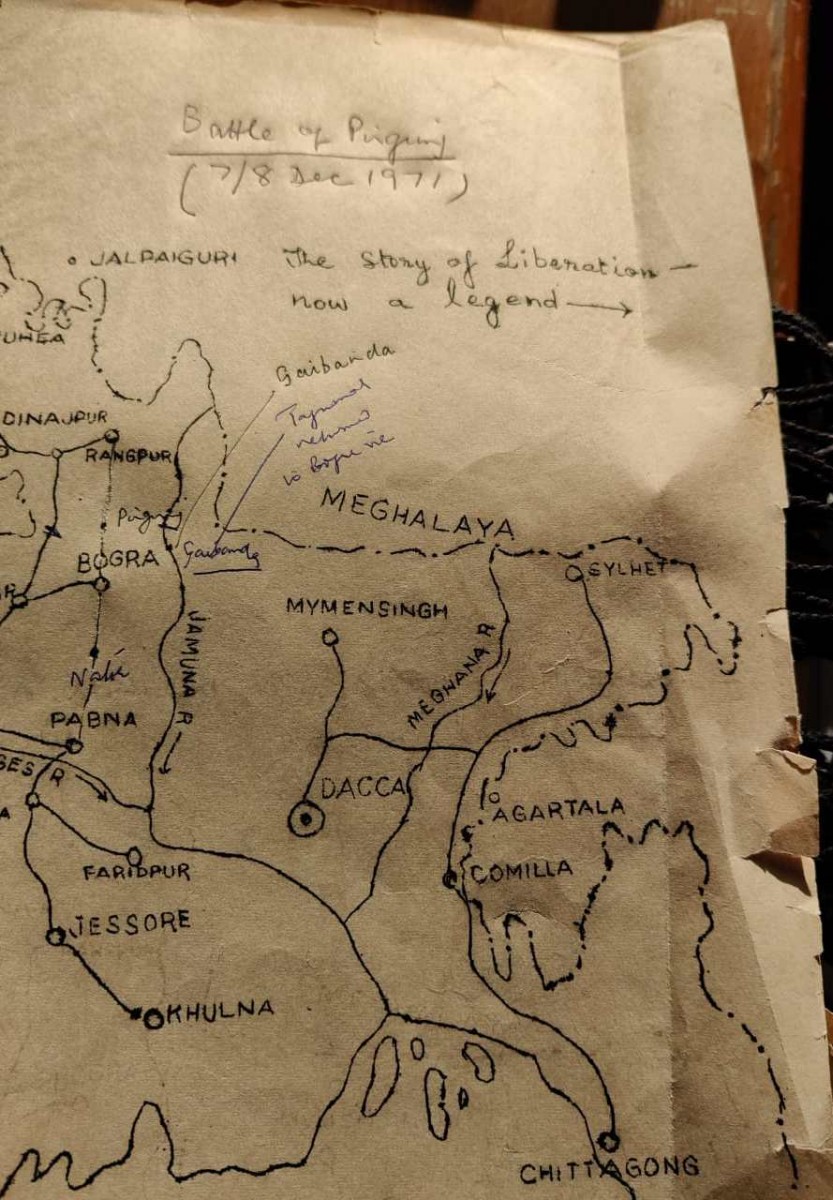 It was the Pirgunj battalion’s tactical roadblock that altered the strategic balance in the northwestern sector of East Pakistan (see map). The Pirgunj block was inserted by turning the East Pakistan border defences at their strongholds of  Dangerpara and Hilli, from the Malda-Balurghat bulge along its narrowest portion, and snapping the waistline ending at Gaibanda on Meghna river. 2/5 Gorkha Rifles (Frontier Force), some elements mounted on a squadron of PT 76 tanks and a column of Mukti Bahini crossed the Karatoya river near the border to bisect at Pirgunj Pakistan’s 16 Infantry Division defences on the night of December 7-8. Pakistan’s 23 Infantry Brigade at Ranpur in the north was isolated from the rest of the division at Bogra (205 Infantry Brigade) and Nator Divisional Head Quarters.

2/5 GR established two company-sized blocking positions north and south of Pirgunj astride the road, with stops at Gaibanda, the escape route. Major General Nazir Hussain Shah, GoC Pakistan 16 Infantry Division, was nearly ambushed early on December 8 at Pirgunj by an advance column of the Gorkha battalion while he was driving towards Rangpur in two jeeps accompanied by Brigadier Tajumal Hussain, Commander 205 Infantry Brigade at Bogra. General Shah abandoned the jeeps, hid in a mango grove nearby and in the melee got separated from Brigadier Hussain. He managed to reach Rangpur, hitchhiking and taking a lift in a civilian car. 2/5 GR missed the prized catch of the GoC by default and slovenly action. Besides this lapse, the battalion’s solid defence of Pirgunj was brilliant and changed the future course of the campaign in this sector. 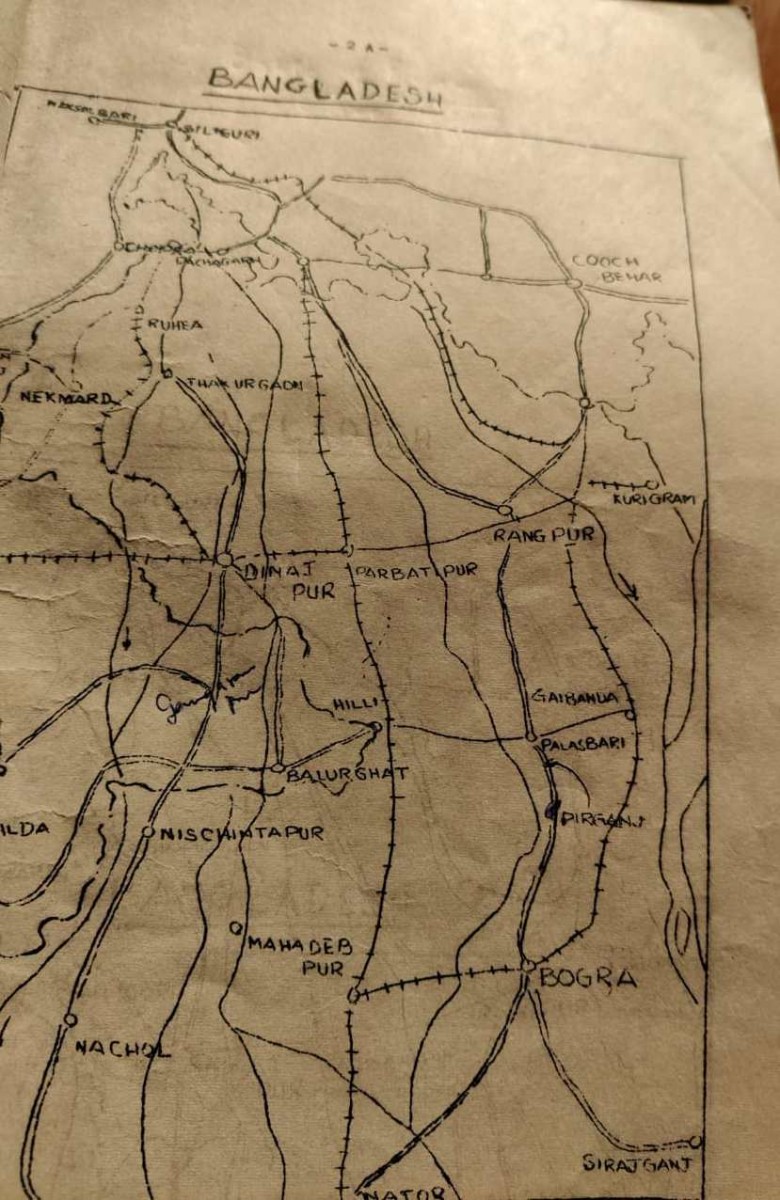 The Pirgunj battle is also the story of Major General Shah, the cat with nine lives (he survived an IAF attack on his jeep earlier), whose 16 Infantry Division was responsible for North Bengal, Pachgarh and Rajshahi districts. A US Fort Leavenworth product, Shah had shown a clear head and traits of a thinking general. After the surrender ceremony on December 16, he told me during a Jonga ride that the bulk of his forces were still intact along with his nucleus divisional headquarters at Nator long with 6 Infantry battalions which remained unused for the most part.

“At Pirgunj, you (2/5 GR) fought only two of my battalions – 32 Baluch under Lieutenant Colonel Mahmud Sultan from Bogra and 4 Frontier Force from Rangpur,” he said. These two enemy battalions repeatedly counterattacked the company blocks at night, with Lieutenant Colonel Sultan being killed in an assault on a Gorkha machine gun post that he personally led. Shah said he got to know about the battalion crossing Karatoya river. He was trying to arrange a reception for the battalion at Pirgunj but 32 Baluch did not move on time to preempt the Gorkha capture of Pirgunj. Instead, he said he was nearly captured, adding that had 32 Baluch given the 48-hour delay sought at Pirgunj, 16 Infantry Division would have counterattacked Indian forces concentrated in the Balurghat bulge with 23 Frontier Force and a squadron of Chaffee tanks and lifted the road block. In the event, 16 Infantry division was dismembered with half of its resources rendered hors de combat due to the Pirgunj road block.

General Shah believed in mobile warfare and had been able to create five Brigades from the authorised three brigades in his division. Despite his tactical ingenuity and juggling with troops, he was unable to employ the full force of his division’s punch as the Pirgunj roadblock had unhinged his defensive plan and layout. The final battle which followed at Bogra by 340 Mountain Brigade group, to which 2/5 GR (FF) belonged, crushed Pakistani resistance, hollowed out by attacks by the IAF, Mukti Bahini and India’s very effective psy-war and deception.

Also read: The Legacy of Bangladesh’s Liberation Is Under Grave Threat

In the end, it took loud hailers aided by surrendered Pakistani senior officers to make the more rabid Pakistani defenders emerge from their hideouts with white flags. The Pirgunj road block was a classic example of infantry-tank operations by stealth that sealed the fate of Pakistan’s 16 infantry division and hastened its surrender, which in turn contributed to the collapse of Dacca garrison. The Gorkhas held their ground at Pirgunj throughout the night and the next day, under relentless multidirectional counterattacks that tried to lift the roadblock and clear the Rangpur-Bogra-Pabna-Dacca highway.

The Indian Army took great care of the 93,000 prisoners of war, without violating their dignity and respect. It was  humility in victory that garnered from Pakistan soldiers this tribute: “Your (Indian) officers and our soldiers will make a great fighting force.” But younger Pakistani Army officers were belligerent in defeat. Some of them wrote in Indian Army visitors’ books that one day they would avenge their defeat and humiliation. That revenge is still playing out. The jihad in Jammu and Kashmir is retaliation for the use of Mukti Bahini in East Pakistan.

Sadly, defeat of its army helped Pakistan get rid of the military only temporarily. Is another military defeat the only way to let Pakistan become a fully democratic country? For India, the military gains were frittered away without any solid political outcomes. Now Pakistan is able to concentrate its resources in one entity. While geography has been rectified, the threat has magnified. Rectifying another historic anomaly is still awaited: a Bharat Ratna for Field Marshal Sam Manekshaw ever since the eligibility criterion for it was changed in 2011 to ‘exceptional service/performance of the highest order in any field of human endeavour’.

The conversation between Major General Nazir Husain Shah and the author, the second in command of 2/5 GR (FF), was recorded while escorting General Shah from Bogra to Govindghat.