The defence minister dropped an earlier reference the MoD made to a ‘technical malfunction’ of the missile, perhaps because the government does not wish to suggest the BrahMos system is in any way inadequate. 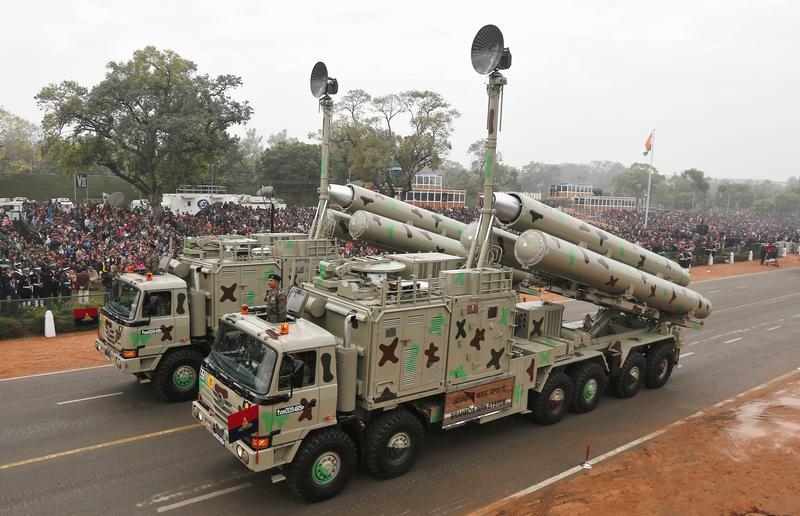 New Delhi: Even though defence minister Rajnath Singh’s recent statement in parliament on the accidental firing of an Indian unarmed missile into Pakistan’s territory last week was short on detail, service officers say it subtly indicated the government’s reckonings on the alarming incident.

They said that while Singh’s account essentially duplicated what his ministry said  two days after the March 9 incident, it ‘revealingly’ differed in one respect which could provide a clue to what led to the projectile’s chance launch into Pakistan. In his statement, the defence minister omitted any reference to the ‘technical malfunction’ of the missile in the course of ‘routine maintenance’, which his ministry claimed had led to the missile’s inadvertent liftoff.

Instead, Singh specifically told the Lok Sabha on March 15 that the Indian military’s standard operating procedures (SOPs) with regard to missile handling, though unmatched and of high calibre, would be revised – if needed – following the ensuing Court of Inquiry (CoI) into the incident.

Senior service officers and defence analysts interpreted this to indicate that the government is suggesting ‘human error’ – and not some technical inefficiency or shortcoming in the missile system – may well have precipitated the mishap, the first ever of its kind between two nuclear weapon states (NWS).

However, due undoubtedly to security considerations, Singh had refrained from either identifying the concerned missile, its launch site or even which of India’s three armed forces were involved. In all likelihood, such obfuscations are likely to endure, considering the sensitivity of the issue. 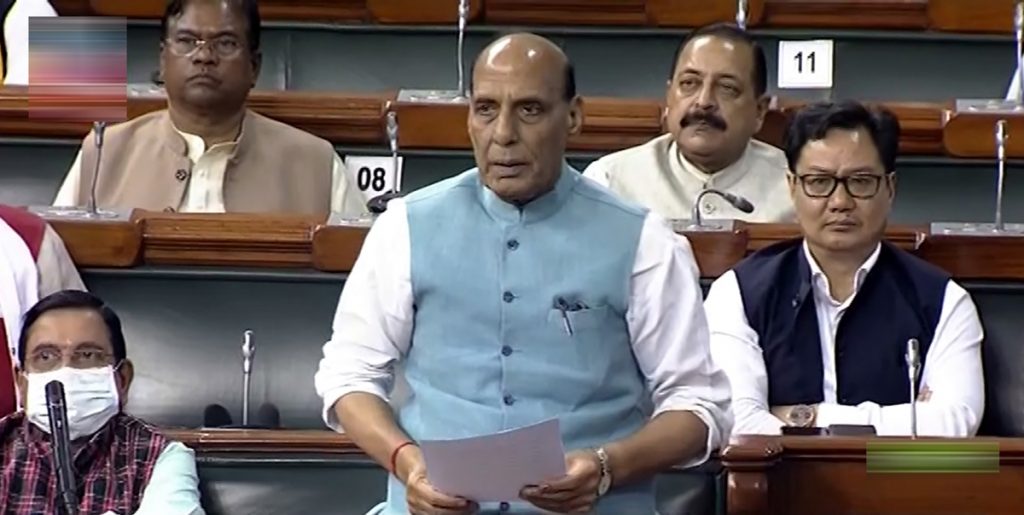 Union defence minister Rajnath Singh speaks in the Lok Sabha during the second part of the Budget Session of Parliament, in New Delhi, March 15, 2022. Photo: SANSAD TV screengrab via PTI

But military and security sources have definitively identified these ‘unknowns’ as the BrahMos cruise missile with a 292-400 km strike range which was fired on the evening of March 9 from Sirsa in Haryana, or a contiguous location, by the Indian Air Force (IAF). Furthermore, The Tribune newspaper reported on March 16 that a “clutch of IAF officers from in and around Ambala” would be queried by the COI on the force’s missile storage and inspection protocols. It added that all data and procedures followed by the IAF on the day of the accident too would be scrutinised.

“By stressing on SOPs rather than on routine maintenance and technical malfunction in the errant BrahMos, Singh seems to be pointing a finger at lapses in missile handling,” said a retired two-star IAF officer. But all such details would ultimately be determined by the CoI, but almost definitely not publicised given its sensitivity, he added declining to be identified for commenting on such a delicate matter.

They stated that the BrahMos, designed jointly by the Defence Research and Development Organisation (DRDO) and Russian technicians 2000 onwards, and built locally thereafter at a facility in Hyderabad, had ably demonstrated its infallibility over two decades of developmental and user trials. Operationalised by all three Indian services, the BrahMos is the world’s fastest cruise missile and had recorded multiple faultless launches and logged an impressively high circular error of probability, or pinpoint accuracy, in engaging its targets.

Singh acknowledged that the accidental launch occurred at around 7 pm, some 21 minutes after sunset in northern India and almost certainly in darkness when standard maintenance of equipment, especially missiles, is rarely undertaken unless an exercise or urgent deployment was afoot. Singh’s time frame for the unintended missile launch is corroborated by the Pakistan Air Force (PAF) which claims to have closely monitored its take-off and flight path.

A day after the intruding missile landed harmlessly in the small Pakistani town of Mian Channu in Punjab’s Khanewal district, some 124 km from the Indian border, the PAF stated that it had taken off from Sirsa at 6:43pm local time. This would have made it 7:13 pm in India, mostly definitely after nightfall. The PAF also asserted that the duration of the missile’s flight path was 406 seconds, for half of which – 224 seconds – it had traversed two of Pakistan’s four provinces, before hitting a wall in Punjab.

Industry officials also pointed out that the authorities were ‘commercially conscious’ of the fact that any hint of a ‘technical malfunction’ in the BrahMos triggering its chance flight could adversely impact the $375 million deal which Delhi signed with the Philippines in January for three of its land-attack batteries. They reasoned that such fears could also result in other potential BrahMos customers like Brazil, Indonesia, South Africa and Vietnam, amongst others, querying the missile’s operational credentials. It was also unclear, like all other aspects of this incident, whether the COI would include an independent technical audit of the BrahMos missile system itself, or not.

Meanwhile, in the absence of all details surrounding this misadventure, some military analysts even speculated about the possibility of the delinquent missile having been a BrahMos-A (Air) variant, fired perhaps from an IAF Sukhoi Su-30MKI multi-role fighter. In mid-2020, the Centre for Military Airworthiness and Certification in Bangalore had approved provisional fleet release clearance to Su-30MKIs with reinforced airframes, to operate the 2.5 tonne anti-shipping BrahMos-A air-launched cruise missile fitted to their underbelly. 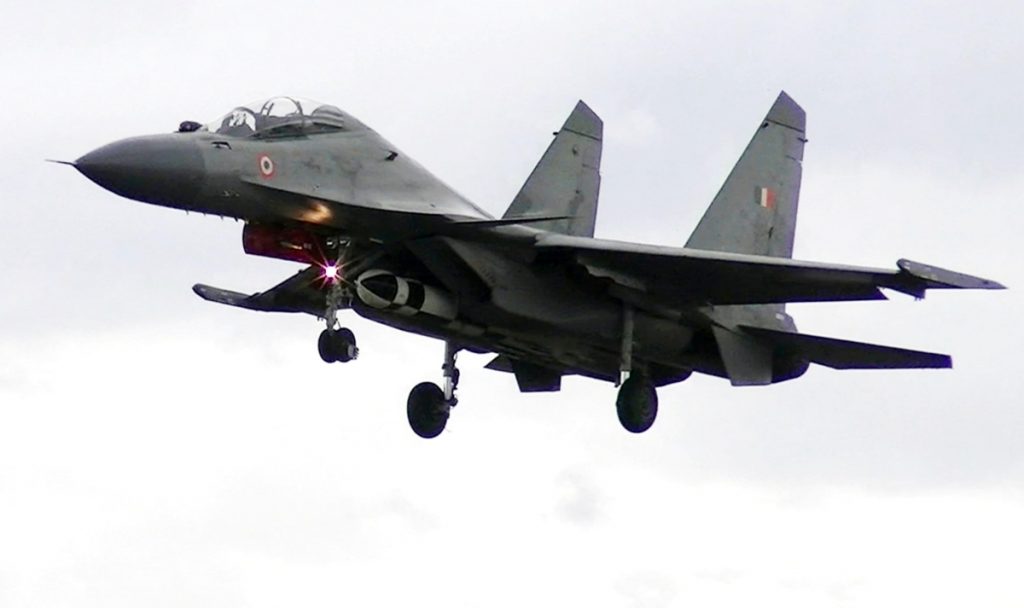 In the meantime, a fierce debate has erupted on social media in Pakistan with netizens questioning its military’s inability to neutralise the incoming rogue Indian missile, which they justifiably claimed the PAF had no way of knowing whether it was armed or not.

The PAF’s Air Defence (AD), responsible for dealing with such threats, is an integrated independent tri-service command headquartered at Chaklala in Rawalpindi. Exclusively India-centric in nature, it had evolved in the 1980s to overcome its military’s enduring operational dilemma of inadequate strategic depth compared with its bigger and more resourceful eastern neighbour with whom it had till then fought three wars.

According to Puneet Bhalla of the Centre for Land Warfare Studies (CLAWS) in Delhi, Pakistan’s AD network was predicated on dealing with aerial threats at altitudes varying from 100 ft to 40,000ft and corresponding ‘effective interception’ distances of between 90-110 km via a dense and inter-meshed radar network. In a 2012 analysis for CLAWS, Bhalla stated that Pakistan was initially assisted in its AD endeavours by the US’s Hughes Aircraft – later Raytheon – and Germany’s Siemens.

Its resultant AD grid integrated the Siemens Low Level Air Command System with Hughes C3I Air Defence Ground Environment System, alongside a string of mobile radars to provide the PAF multi-layered cover along the Indian border. But these were limited primarily to identifying enemy aircraft, and not geared to tracking intruding missiles which, at the time, were at a nascent stage of development in both countries.

Bhalla says that Pakistan’s AD weaponry too was confined principally to its fighter fleet, supplemented by shoulder-fired surface-to-air missiles and French-origin short-range Crotale anti-air missiles that were geared to intercept low-flight anti-ship missiles and aircraft. Alongside, the PAF AD also fielded France’s MBDA Spada air defence system, comprising radar with a 60 km detection range and missiles capable of neutralising inbound missiles and aircraft at ranges of 20 km, which at the time were deemed adequate.

But over decades, bilateral threat levels escalated with difficult-to-detect ballistic and cruise missiles – like the BrahMos travelling at 2-3.5 times the speed of sound – emerging, necessitating Pakistan’s deployment of advanced air-defence systems. Consequently, in late 2021, Pakistan’s Inter-Services Public Relations, the media wing of its military, announced the induction of an undeclared number of Chinese-origin HQ-9/P High-to-Medium Air Defence Systems to replace its legacy AD network.

The ISPR claimed the HQ-9/P was capable of engaging cruise missiles and aircraft in excess of 100 km with a high ‘single shot probability’, but experts maintained that this extended range was actually against aircraft; to neutralise cruise missiles, it’s range was just around 25 km. The HQ-9/P constitutes the outer ring of the PAF’s AD grid, with medium range cover being provided by nine HQ-16AE SAM systems, also procured from China, with an aerial target engagement range of 40 km.

Hence, it’s difficult to ascertain whether Pakistan’s AD could have, even it had wanted, counteracted the inbound BrahMos. It is equally unlikely, considering its military’s inherent belligerence towards India, that it would have passed up the chance to do so, but that is altogether another debate.

However, in the interim, Indian military planners fear that a forensic examination of the BrahMos missile remains in Mian Channu by Pakistani technicians and defence experts, could to some extent undermine their efforts at fielding a daunting and unique cruise missile which till now was a closely-held secret. Moreover, considering Islamabad’s military, political and financial ties with Beijing, it’s a foregone conclusion that China too will be provided the data Pakistan can glean and deduce from the rogue BrahMos’s remains.

In short, the prospective ‘human error’ that might perhaps have led to the unplanned missile launch could, ultimately, prove expensive.