The letter has dared the security forces to stop the meeting. 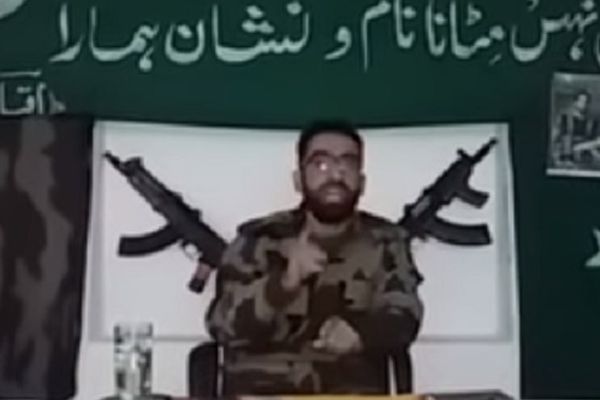 Srinagar: A statement purportedly issued by Jammu and Kashmir’s largest militant group – the Hizbul Mujahideen (HM) – has been doing the rounds on social media since Saturday evening, prompting authorities to closely monitor the law and order situation in the Valley.

According to the statement, the militant group has challenged authorities here to stop a meeting of HM’s command council scheduled to be held in Srinagar on November 21. The last time, senior police officials said, that such a meeting was ‘announced’ in Srinagar was way back in the year 2000. However, overground workers (OGW), militant sympathisers and supporters of the militant group often meet in the Valley to discuss strategy and matters concerning the outfit.

“It is to inform all you that on November 21st of 2018 Hizbul Mujahdeen Jammu and Kashmir would be holding its command council meeting in Srinagar. This year the meeting will be presided over by our senior member from Shopian,” reads the letter issued under the name of Muhammad Bin Qasim, field operational commander of HM.

The letter has dared the security forces to stop the meeting. “We by the grace of God are challenging India and its stooges to stop us. The command council will hold deliberations on various issues and future course of action. Some of the minutes of the meeting will be made public after the successful completion of meeting,” reads the letter. 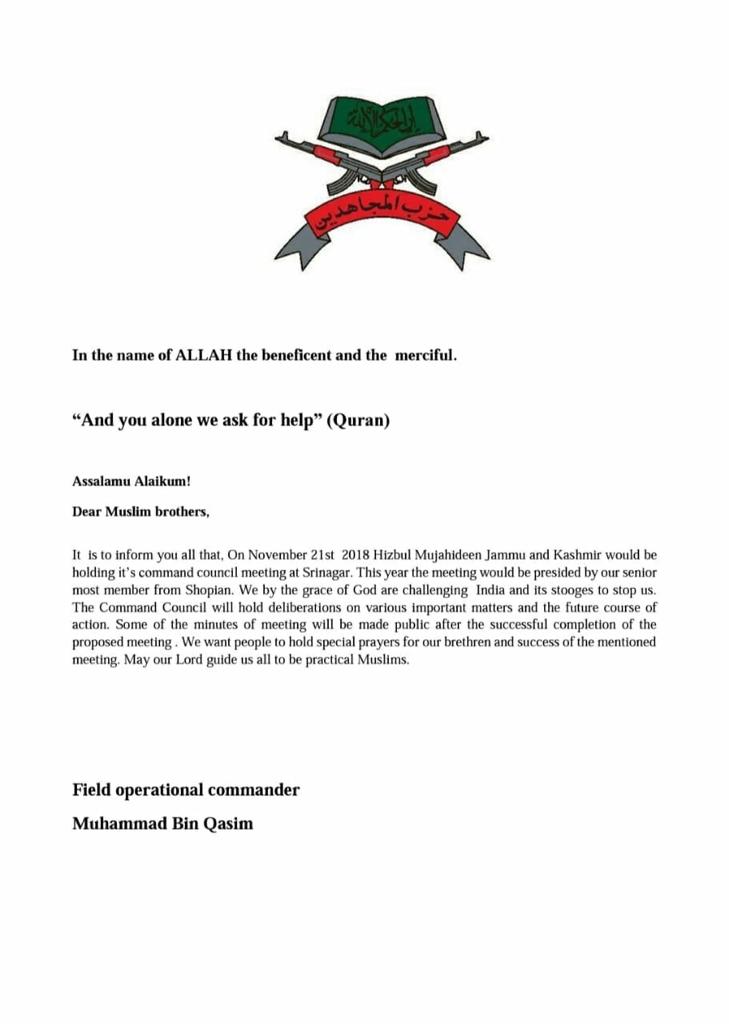 The Hizbul Mujahideen announcement doing the rounds on social media.

A senior police officer, asking not to be named, said security officials were in the process of verifying the authenticity of the letter circulating on social media.

Besides local police, The Wire also spoke to intelligence and Central government officials regarding the latest statement.

“Such meetings take place every year, at least on paper. Sometimes in Srinagar and sometimes in Pakistan. In Kashmir the meetings would take place in rural districts. However, they would not make it public before conducting it,” said a senior police official.

The officer further said that the HM openly saying it will conduct the meeting could also mean the meeting might have already taken place in Srinagar. “They might have met in Srinagar already and will release the footage on November 21,” the officer claimed.

A Central government official, speaking on the condition of anonymity, said, “Every once in a while they (HM) claim or attempt such meetings. The last time such an attempt was made (in Srinagar) was in October this year. Sometimes OGWs meet and claim a convention has been done. Many underground organisations employ the same tactics,” said the senior official. Nevertheless, police since Saturday evening have increased security measures.

Another police official posted in Srinagar said that there were chances of such a meeting taking place on the night of November 21 owing to the fact that the day marks Eid Milad un Nabi, the Prophet Muhammad’s birth. “The night will see a major movement of worshippers in some areas if Srinagar. So chances are that some people might meet,” the official said.

The development has caused quite an uproar on social media websites and amongst the general public in Srinagar, with some bracing up for a “major development” next week while others question the motive behind the announcement of the supposed meeting.

The development comes days after an 18-year-old youth was abducted and later shot dead by the HM in the Niklora area of south Kashmir’s Pulwama district late on Thursday evening. Since then, suspected militants have abducted six persons and killed two of them.

The body of Nadeem Manzoor Dar (18) of Safanagri village in Shopian was later found at Niklora village.
An unverified audio of Hizbul commander Riyaz Naikoo has been circulating on social media websites, in which he claims to have killed Nadeem, accusing him of being an ‘informer’ and ‘being pivotal in getting two of his affiliates killed’ by government forces.

On Saturday, suspected militants abducted five youth, among whom one was found dead in an orchard during day.

While Ganaie and Thokar were released, Kaundur’s body was found later in the day.

Later on Saturday, gunmen abducted two more youth from Memandar area of Shopian district. Whereabouts of the duo are not known yet.

On Saturday evening, HM also released an audio and video clip in which Nadeem is shown confessing to have informed the army about the presence of militants. Riyaz Naikoo, operational commander of the group, in the same yet to be verified clip is heard threatening individuals who aide the army in their counter-insurgency efforts.