While the army denies allegations that senior officers were seeking voting preferences of jawans over the phone or even casting ballots for them in some cases, the EC may need to consult the relevant parade state register of each unit to confirm the physical location of all jawans who voted.

New Delhi: Army commanding officers in Ladakh have been accused of malpractice in the electronic postal ballot system. The deputy commissioner and district election officer (DEO) of Leh has written to the general officer commanding, 14 Corps, alleging that “commanding officers are telephonically asking jawans for their voting preference rather than supplying to them the ballot paper for casting their vote”.

The letter, sent on May 10, by Avny Lavasa, who is also the daughter of Election Commissioner Ashok Lavasa, cautions that “this is a gross violation of secrecy of voting and a malpractice that has the potential to invite strict legal action.”

She has further urged that “all the concerned officers may be sensitised about the issue and the sanctity of election process maintained.” 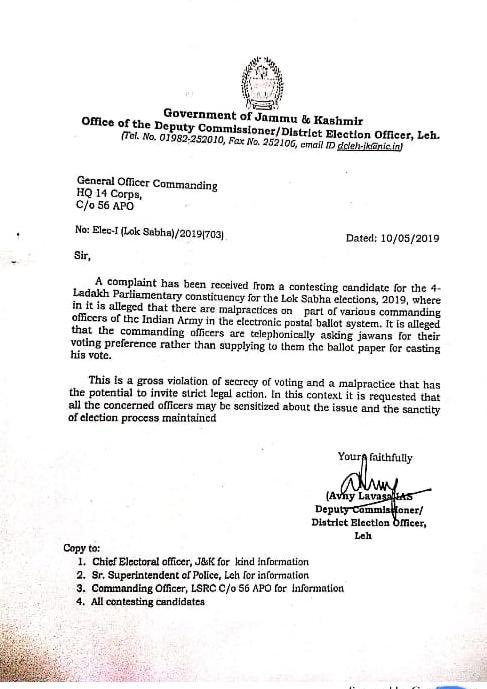 Letter dated May 10, 2019 written by the district election officer, Leh, Jammu and Kashmir.

Lavasa copied the chief electoral officer of Jammu and Kashmir, senior superintendent of police, Leh, commanding officer, LSRC and all contesting candidates in her letter.

The army later issued a statement through its public relations officer in Srinagar, Colonel Rajesh Kalia, stating that “some political candidates appear to have complained regarding postal ballot process to be cast by service personnel.”

It added that “no specific instances have been mentioned in the complaints” and that “preliminary investigations indicate that the complaints are unfounded and appear to have been made to tarnish the image of Army.”

The PRO further stated that an “in depth investigation is on to ascertain the details in the most impartial manner” and claimed that “Army remains apolitical and we hold this core value in letter and spirit.”

Administrative officials apprehend that there may have been bogus voting in almost all border areas where the army is stationed along China and Pakistan border, and that the Intelligence Bureau is aware of instances other than Leh where jawans in forward posts or training or movement were made to vote “telephonically” even though they were not physically present.

Bureaucratic sources told The Wire that the parade state register maintained at each unit office contains the detailed movement of every jawan or group and their posting or movement as the case may be. The register contains the last ration certificate i.e. the place from where a jawan drew his last ration. It also contains the details as to whether the jawan came by walking or in a vehicle. The sources say that in the face of allegations of officers having abused the voting process, a basic check can be established between ballots cast and the actual location of jawans on polling day as per the parade state register.