A Guide to What's Happened in East Ladakh, and the Way Ahead for India and China

The withdrawal by the PLA to its original positions is India’s end objective. India will go by deeds, not Chinese words. 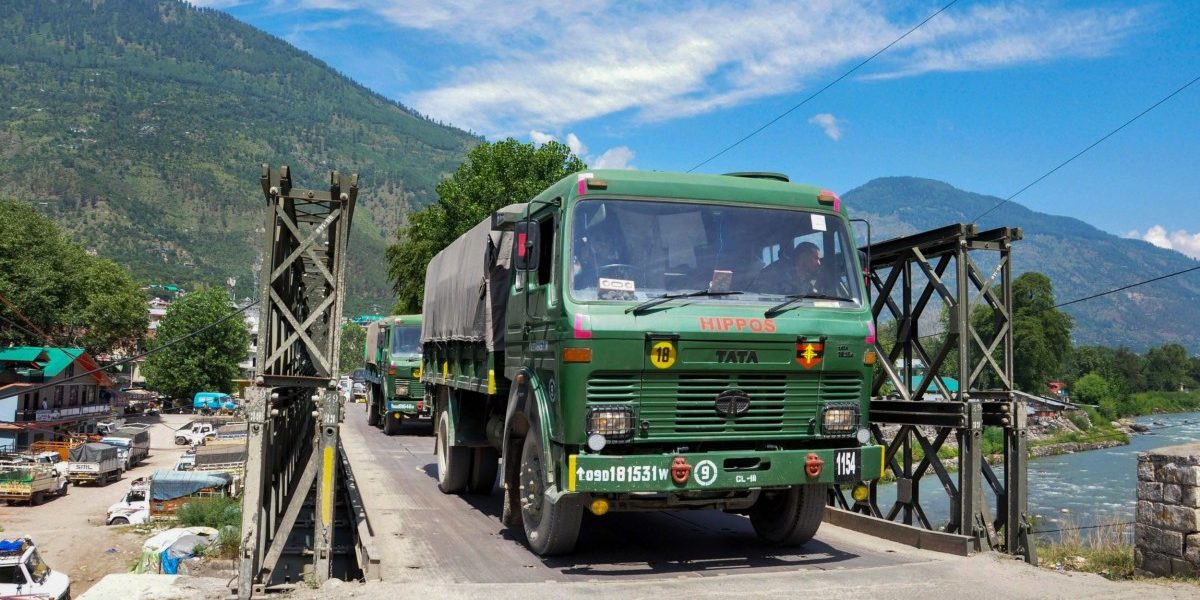 An army convoy in Kullu, heading towards Ladakh, Photo: PTI

This is déjà vu: another declaration of disengagement and de-escalation following the third meeting of opposing generals claiming limited pull-back of 1-2 km from Galwan, Hot Springs and Gogra.

Special representatives (SR) for border talks National Security Advisor Ajit Doval and councilor and foreign minister Wang Yi spoke on Sunday, reaffirming disengagement and de-escalation accompanied by a lot of diplomatese but without mentioning restoration of status quo ante May 5.

If India is also withdrawing same distance from these friction points, it is pulling back from its territory. The People’s Liberation Army is withdrawing from incursions it made. India has already been prevented from patrolling by the PLA because of its intrusions. Clearly if reports are accurate, India has accepted buffer zones, it is truce after Narendra Modi’s thundering in Ladakh.

It’s the right time to take stock of where we are on the Line of Actual Control, where PLA intrusions are going in the context of Modi’s pep-talk to troops in Ladakh, warning to China, SR talks that followed, and how this standoff might end. While Modi’s Ladakh visit and his speech, akin to military commanders before launching troops into battle, were clearly part of strategic signalling and about Indian resolve, de-hyphenating  punitive trade and diplomatic measures from border management, it was also a calibrated political response to the Galwan clash, with a persuasive appeal to China to change its expansionist behaviour.

Calling out China as the enemy without naming it has raised the stakes. The strategic guidelines about maintaining  peace and tranquility along the LAC to military commanders given at Wuhan have evaporated, replaced with belligerence, though these were repeated last Sunday.

The euphoria accompanying the Ladakh visit is no substitute for asymmetry in hard power. China’s response to Modi’s cri de coeur, though at a low level, was immediate and sharp: while the Chinese embassy at New Delhi said it was “groundless to view China as expansionist”, the foreign ministry spokesman in Beijing said, “New Delhi should avoid a strategic miscalculation with regard to China.”

Here is a layperson’s guide to developments in East Ladakh.

Situation on the LAC

1. In an act of ultimate defiance, PLA re-installed its post at the confluence of Shyok and Galwan rivers near PP14 after it was destroyed by Colonel Santhosh Babu and his men from 16 Bihar, culminating in the PLA ambush which led to medieval unarmed combat and casualties on both sides.

This shows that PLA declaration to disengage, to de-escalate from friction points by withdrawing nominally from intrusions points, is token movement. Although SRs have invested confidence in the military commanders’ dialogue and working mechanism for consultation and coordination on border affairs processes, these will work for limited purpose of removing tension and not addressing the reasons for periodic aggression by the PLA.

2. The multiple intrusions stretching from Depsang to Chushul are a fait accompli, articulated with troops extending China’s 1959 claim line further east in Ladakh.

Previous intrusions were vacated with troops going back to their original positions after Indian show of strength and negotiations. This time there was unprecedented violence amounting to barbarity during the fracas while PLA ingressed in uncontested areas like the Galwan river valley.

Further, PLA has blocked en masse, all Indian patrols from moving up to their claim line. Intrusions appear not to be for bargaining as initially thought but for permanently altering status quo and drawing a new claim line.

Also read: Galwan Is a Chapter in China’s Tireless Pursuit of ‘Lost’ Territory

3. There is a pattern to PLA aggression from Sumdorong chu (1986-87) to Depsang (2013) to Chumar (2014) and Doklam (2017). The PLA has always been the first mover, with India the responder. But at Sumdorong chu and Doklam, it acted firmly and swiftly, negating PLA advantage and forcing status quo ante. This time reaction to build-up was delayed, with Galwan acting as trigger.

4. After being in denial for seven weeks about intrusions, India  finally acted to block, not counter, intrusions. China has imposed costs. It has forced deployment of three infantry divisions – two from outside the theatre – to plug gaps along the LAC, turning it into a de facto LoC.

5. At each of the seven intrusion points, PLA has deployed a combined arms brigade with one infantry battalion up front and remainder brigade in rear, supported by tanks and artillery. Approximately 20,000 to 30,000 troops from South Xinjiang Military Region under Major General Liu Lin are holding fort and belong to the Western Theatre Command under General Zhao Zonqi, who was also the commander during the Doklam face-off. There is mirror Indian deployment at most intrusion points .

6. Behind the entire 3,488 km of LAC, India has occupied high altitude defences inside its territory on key terrain and the watershed. The PLA does not hold ground along or behind its LAC except remote posts from where troops from its border regiments like our ITBP patrol areas to exercise  control. Their main garrisons are 500 to 1,000 miles behind from where they move forward for summer battle drills. They are not known to have prepared defences in depth areas like India except near Aksai Chin.

The biggest challenge for India is logistics – maintaining 30,000 extra troops by air once passes close in winter at Zojila and along Manali. It will not be easy for the PLA either.

7. The Indian Army was reportedly given a free hand after the Galwan clash. It was pure political rhetoric. As of now, the orders are: there will be no shooting. “You shoot, you escalate,” says P.S. Raghavan, chairman of the National Security Advisory Board. Further, Indian troops have been told to limit their movements so as not to provoke the PLA and retaliate if attacked.

8. India lacks a low cost equaliser. India does not want war, even a limited one, like the riposte at Nathu la in 1967. Neither does China, having accomplished the political objective of intrusions.

Local tactical action as Galwan has demonstrated it will have strategic implications. Revenge or retribution à la Balakot is just not sustainable. Time for tit-for-tat operations has passed its use-by date.

However, looking beyond the LAC there are military options in the east Indian Ocean area, especially around choke point of Malacca Straits. The Indian Navy is prepared for coercive action against Chinese vessels. Despite SR talks some options are still on the table.

Also read: How Bengal’s Kalimpong Triggered the Souring of India-China Relations in the 1950s

9. So essentially India is left with diplomatic and economic responses, some of which it has started using like reducing dependence on goods from China.  Another Galwan-like incident will mark crossing the rubicon and trigger  many  sterner measures that will hurt China and more India.

The crisis is a fillip to India’s defence modernisation, stuck on low funding. In his Nimu speech, Modi was economical with truth on his government providing moneys for defence. It has been measly.

1. After Modi’s initial statement at the all-party meeting after the Galwan clash, virtually stating that nothing had happened, the government stayed in denial mode till a week later, when the Ministry of External Affairs spokesperson and the Indian ambassador in Beijing sequentially admonished China for attempting to unilaterally alter the status quo.

Modi has tried to maintain his muscular image even as the Congress party has been taking potshots at him about not naming China. The Modi speech at Nimu, Ladakh has laid to rest that controversy. His ministers are gung-ho saying a befitting reply has been given to China through the digital strike. The Congress will keep nagging Modi, finding holes in his strategic push back following policy lapses along the LAC that allowed PLA intrusions to take place.

Bihar elections being around the corner will keep the sparring going.

2. Calling for unity in this hour of challenge is futile because of the politicisation of national security. During the Kargil skirmish, the Congress was forever attacking the government for intelligence failures that led to Pakistani intrusions opposite the lifeline from the Srinagar valley to Siachen and Ladakh.

1. China will want to stabilise and maintain intrusions intact without further escalations. By now it is eminently clear that the primary motivation for China’s aggressive behavior is the stress of the pandemic issues, its mishandling and diverting peoples attention to its periphery and borders.

The Communist Party of China’s principal concern is internal stability and its biggest security  threat: a breakdown of law and order like Tiananmen Square. Between 1993 and 2008 there were 614,000 protests across China .That is why China spends more money on internal security than on external defence.

2. India’s infrastructure and the threat it poses to the security of G219, the strategic highway from Xinjiang to Tibet through Aksai Chin, is a worry for PLA. Its ability to interdict India’s strategic highway from Darbuk to Daulat Beg Oldie from Galwan heights, will be a game-changer and a new challenge for India.

The overall pattern of assertion has the Xi Jinping stamp. He recently said every inch of territory lost through unequal treaties has to be reclaimed and asked the PLA to be ready for war. Under Xi, China is showing the political will to redeem its claims even as they go back centuries.

1. Not a single country in the South Asian neighbourhood has openly come out in support of India, not even Bhutan. In 2014, on a visit to India, Xi had said that China is a neighbour of South Asia.

2. The China-Pakistan nexus is alive but is not a military threat as long as it is a ‘no war, no peace’ situation. Pakistan has deployed additional troops in Gilgit-Baltistan due to elections there next month. In fact, Pakistan is worried India may launch a limited war to make up for possible loss of face for Modi in Ladakh.

Pakistan has posted a military officer to China’s Central Military Commission Joint Staff Department. China provides Pakistan intelligence, nuclear know-how, armaments and strategic support. It’s the only ally it has. In 1962, the US kept Pakistan off India’s back.

The prevailing global mood about Chinese aggression extending from the South China Sea to Hong Kong to Taiwan and to India is in New Delhi’s favour though only the US, Japan and Australia have condemned Chinese unilateralism in Ladakh.

India’s erstwhile best friend Russia is strictly neutral, selling weapons to both China and India. The US’s support to India in the event of hostilities will be only in providing intelligence, logistics and transfer of weapon systems.

India has said it hopes China will implement whatever has been agreed to so far by the military commanders. The SRs have spoken. Both dialogues mention disengagement and de-escalation. That is not enough.

The withdrawal by the PLA to its original positions is India’s end objective. India will go by deeds, not Chinese words. The PLA did not make concerted intrusions to simply walk back after ten weeks. India has shown exceptional strategic restraint but had little choice. It has also maintained its strategic autonomy.

The bottom line for India is restoring status quo ante May 5. It is unlikely to budge from its stand, backed as it is by strength. A stalemate that hurts China may persuade it to devise a face-saving exit. But it wont be easy for Xi.

The best way to work this out is a high-level back channel facilitated by Russia leading to a Xi-Modi summit but before a harsh winter.