Because of the security forces, we can celebrate not just our festivals but our freedom, our democracy, our civil rights and even our right to be uncivil. 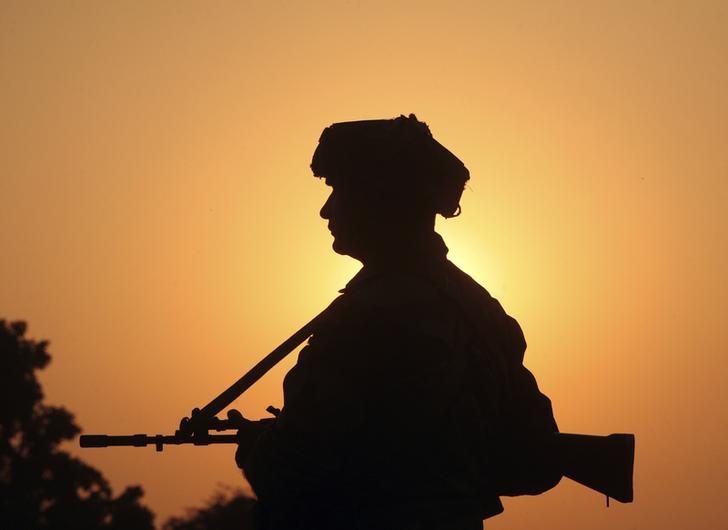 An Indian army soldier at Pindi Khattar village in Arnia, near the border with Pakistan. Credit: Reuters/Mukesh Gupta/Files

Note: This article was first published on October 28, 2016 and is being republished on November 7, 2018 on the occasion Diwali.

This Diwali, many homes will celebrate the festival of lights without a loved one.  These will be homes of soldiers who are out there guarding 15,000 km of our land borders.

They will include homes of the Indian armed forces standing guard along the Line of Control (LoC) with Pakistan and those deployed on the Line of Actual Control with China in Aksai Chin. And of the Border Security Force personnel manning the outposts across the Rann of Kutch, up north to the Thar desert, through the plains of Punjab, all the way to Jammu. These will also be homes of the Indo-Tibetan Border Police manning pickets on the Indo-China border, along with their comrades from the Seema Suraksha Bal. And homes of Assam Rifles who protect our northeastern frontiers.

The jawans of the Central Reserve Police Forces will also spend their Diwali picketed in various troubled spots across the country, including but not limited to the state of Kashmir. They will be accompanied by thousands of soldiers of the Rashtriya Rifles, deployed across the Valley in the wake of recent protests.

Troops of the Central Industrial Security Forces will be on ultra-high alert, as they always are during a festive season. They will be on duty guarding vital installations like nuclear reactors, refineries, ports, railway stations and airports, where they will watch over the safety of millions of holidaying families. The state police forces will be on duty as well. As a rule, leave is cancelled for police forces during festive seasons and this year will be no exception. Most of them will work 72-hour shifts, without a break.

Sailors of the Indian navy will be ‘force projecting’ in the blue waters. Our aircraft carrier will be patrolling the high seas, escorted by a formidable armada of destroyers and corvettes. Their watch will include our island territories. Their underwater brethren will be lurking in submarines listening to sonar pings for threats. Closer shore, interceptors of the coast guard will be sweeping the nautical boundaries of our 7,000-km coastline, searching for possible ‘hostiles’ among thousands of fishing and cargo vessels.

Our air warriors will be on ‘cockpit readiness’ across air bases in India, ready to fly interception missions over our nation’s airspace. Some of their comrades will already be airborne on combat air patrols, providing an aerial umbrella to strategic locations and metro cities. Our transport aircrafts will be pitted against the approaching winter to stock battlefields like Siachen. Our attack helicopters will be rehearsing deep interdiction missions in their operational areas. The casualty evacuation choppers will be ferrying wounded soldiers to base hospitals.

The ‘hit teams’ of our special forces will be patrolling their specialisation beats. They will be combing the Valley, jungles of the Northeast and upper reaches of the Himalayas on ‘seek and destroy’ missions. These units will be joined by their amphibious counterparts, the Marine Commandos, watching over our off-shore assets. The Garuds of the Indian air force will be rehearsing free falls from over 35,000 feet. The black cats of the National Security Guard will be watching over malls, hotels, sensitive locations and crowded places.

Millions of our uniformed brothers and sisters will be assisted by thousands of ‘shadow’ warriors. These will include operatives of the Intelligence Bureau who will be analysing countless potential threats on a daily basis. They will probe, investigate and rule out hundreds of false alarms, searching for a needle in a haystack. Their Research & Development Wing counterparts will be scouring for threats outside the boundaries of India. They will be supported by specialists from technical intelligence organisations like the National Technical Research Organisation (NTRO). They will also be assisted by officers from agencies which work best unnamed. All of their innumerable successes will go unsung. Their failures, however, will be fatal and well publicised.

Hundreds of families evacuated from border villages will spend this Diwali huddled in makeshift camps away from their homes. Their children will cringe in fear at the sight of ‘rockets’ and the sound of firecrackers. They will pray for the jingoism to die down so they can go back to their meagre lives. They will pray that this Diwali brings light, rather than heat.

And many, many homes will not celebrate at all. They will be mourning their loved ones who died so the rest of us could celebrate our Diwalis with our dear ones. Our soldiers leave behind aged parents, widows and orphans who battle the apathy of an amnesic nation, opportunistic politicians, chair-borne strategists and xenophobic, self-aggrandising rabble rousers.

When we light our homes in brightness this year, it would be appropriate to reflect on what it takes for us to celebrate not just our Diwali, but our freedom, our rambunctious democracy, our civil rights and, ironically, our right to be uncivil. Our uniformed and un-uniformed brothers and sisters have proven their worth on every occasion the nation has needed them. This Diwali might be a good time for the rest of us to start deserving them.