Defence minister Rajnath Singh said he was deeply anguished by the sudden demise of CDS General Rawat. "His untimely death is an irreparable loss to our Armed Forces and the country," he said.

New Delhi: Chief of Defence Staff (CDS) General Bipin Rawat died in a helicopter crash near Coonoor in Tamil Nadu, the Indian Air Force (IAF) confirmed on the evening of Wednesday, December 8. He was among the 14 people who were on board, including his wife and staff members. Thirteen people have succumbed to the crash, including CDS Rawat, Madhulika Rawat and 11 others.

“With deep regret, it has now been ascertained that Gen Bipin Rawat, Mrs Madhulika Rawat and 11 other persons on board have died in the unfortunate accident,” the IAF tweeted at 6:03 pm.

With deep regret, it has now been ascertained that Gen Bipin Rawat, Mrs Madhulika Rawat and 11 other persons on board have died in the unfortunate accident.

“Around noon today, an IAF Mi 17 V5 helicopter with a crew of 4 members carrying the CDS and 9 other passengers met with a tragic accident near Coonoor, TN,” the IAF added.

The sole survivor is Group Captain Varun Singh, directing staff at Defence Services Staff College (DSSC). He is being treated for his injuries at the Military Hospital in Wellington, the IAF said. 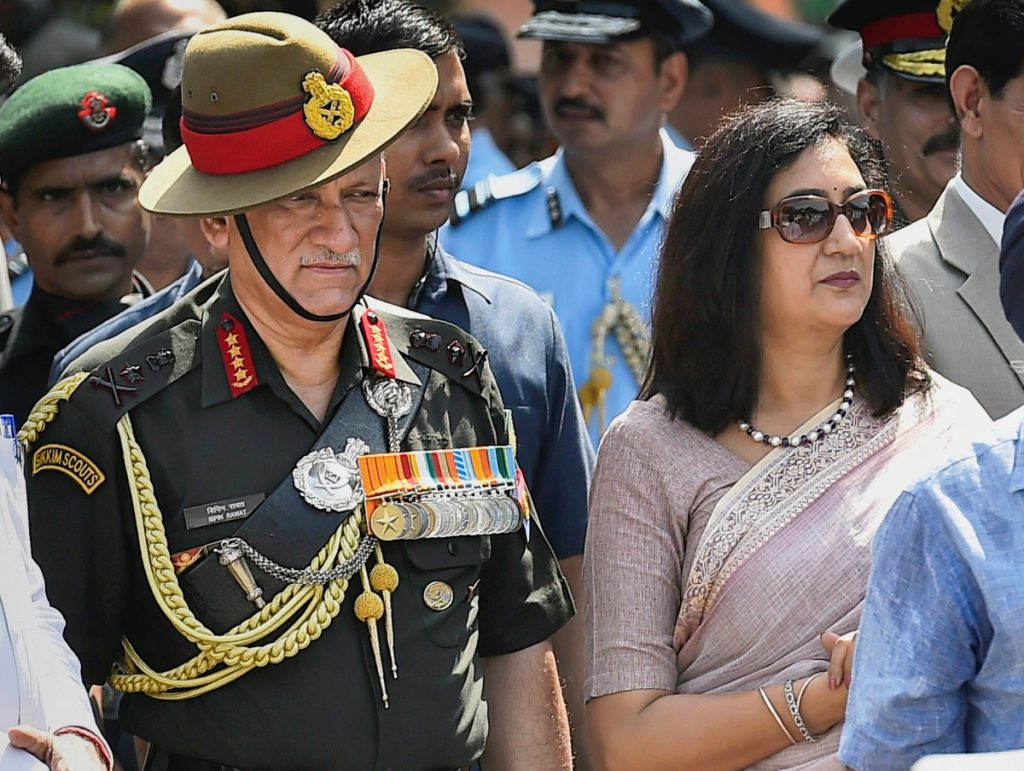 Defence minister Rajnath Singh said he was deeply anguished by the sudden demise of CDS Rawat and the 12 others. “His untimely death is an irreparable loss to our Armed Forces and the country,” he said.

Deeply anguished by the sudden demise of Chief of Defence Staff Gen Bipin Rawat, his wife and 11 other Armed Forces personnel in an extremely unfortunate helicopter accident today in Tamil Nadu.

His untimely death is an irreparable loss to our Armed Forces and the country.

The IAF Mi-17V5 helicopter was on its way from Sulur in Coimbatore to DSSC in Wellington where General Rawat, along with Chief of Army Staff M.M. Naravane, was slated to participate in an event. The chopper crashed in the forest area reportedly due to poor visibility following heavy fog.

Defence minister Rajnath Singh is expected to address parliament on the matter on Thursday, December 9.

The staff officers of Gen Bipin Rawat, Brig LS Lidder, Lt Col Harjinder Singh and a NCO Hav Satpal Rai, also on his staff, who too died in the crash today.@IndianExpress pic.twitter.com/72P57wXmWt

The Cabinet Committee on Security – comprising Prime Minister Narendra Modi and the top four ministers in his cabinet: defence, home, finance and external affairs – convened at 6:30 pm. According to news agency PTI, the CCS was briefed about the crash.

The sources said the top cabinet brass expressed condolences on the death of General Rawat.

At 1:53 pm on Wednesday, the Indian Air Force confirmed in a tweet that CDS Rawat was on board the helicopter and that an inquiry has been ordered to ascertain the cause of the accident. However, there was no official note on injuries or a death toll from the crash until after 6 pm.

An IAF Mi-17V5 helicopter, with CDS Gen Bipin Rawat on board, met with an accident today near Coonoor, Tamil Nadu.
An Inquiry has been ordered to ascertain the cause of the accident.

A list of passengers and crew members of the helicopter from Delhi to Sulur which was doing the rounds on social media names General Rawat, his wife Madhulika Rawat, Brigadier L.S. Lidder (defence assistant to the CDS), Lieutenant Colonel Harjinder Singh (special officer to the CDS), PSOs Naik Gursewak Singh, Naik Jitendra Kumar, Lieutenant Naik Vivek Kumar, Lieutenant Naik B. Sai Teja and Havildar Satpal. However, the manifest doing the rounds on social media is not of the chopper that was in the crash and there has been no confirmation that all the persons included in it were in the chopper which faced the accident.

TV visuals showed the badly damaged chopper in flames, possibly under the impact of the crash. Apparently, a major tragedy was averted as the helicopter fell some distance away from a human habitation, averting more casualties.

The accident site showed trees reduced to broken pieces under the impact of the crash, flames from the chopper engulfing the wooden logs and resulting in billowing smoke. Locals and rescue workers scurried to douse the fire, including using buckets and water hoses. 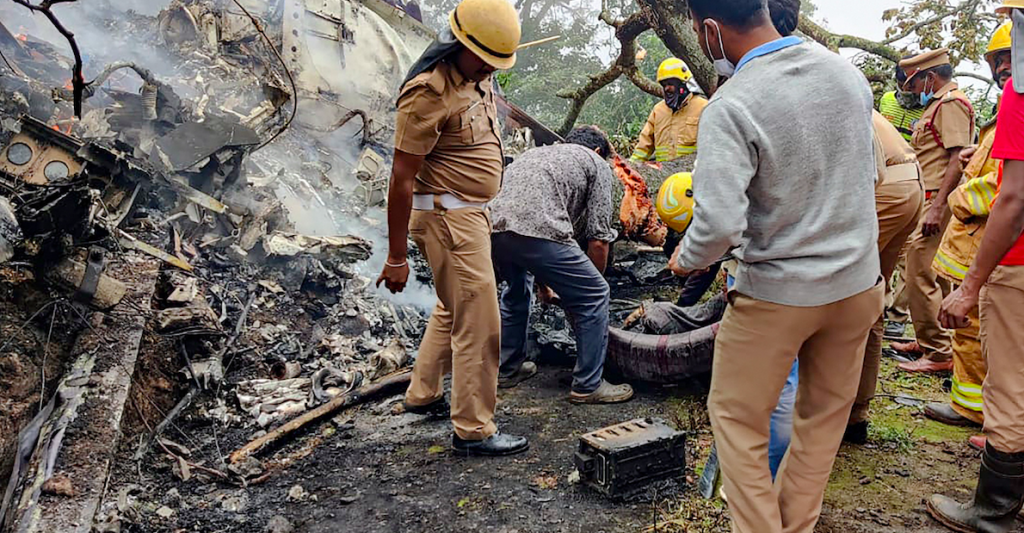 Rescue officials at the spot where an IAF Mi-17V5 helicopter crashed in Coonoor, Tamil Nadu, Wednesday, December 8, 2021. CDS General Bipin Rawat, his staff and some family members were in the chopper. Photo: PTI

The mangled and burnt remains of the ill-fated IAF chopper were strewn along the site, even as rescue workers were seen carrying bodies in stretchers to be transported through waiting ambulances.

The accident site remained out of bounds for civilians. Local eyewitnesses told a Tamil TV channel they could hear a loud noise, apparently the crash, and later saw the chopper on fire, with some of the occupants suffering serious burn injuries.

News agency ANI reported, quoting unnamed sources, that when local military officers reached the location, they were told that locals have taken two bodies with 80% burns to a local hospital.

“Few bodies can be seen downhill in the area of the accident. Efforts are on to retrieve the bodies and check identities,” sources told the agency in the immediate aftermath of the crash.

“Bodies recovered from the site of the crash” have been taken to Military Hospital at Wellington in Tamil Nadu, ANI has reported.

Condolences poured in for General Rawat and the other deceased. In a series of tweets, Prime Minsiter Modi consoled the deaths. He said:

“I am deeply anguished by the helicopter crash in Tamil Nadu in which we have lost Gen Bipin Rawat, his wife and other personnel of the Armed Forces. They served India with utmost diligence. My thoughts are with the bereaved families.”

“Gen Bipin Rawat was an outstanding soldier. A true patriot, he greatly contributed to modernising our armed forces and security apparatus. His insights and perspectives on strategic matters were exceptional. His passing away has saddened me deeply. Om Shanti.”

“As India’s first CDS, Gen Rawat worked on diverse aspects relating to our armed forces including defence reforms. He brought with him a rich experience of serving in the Army. India will never forget his exceptional service.”

Gen Bipin Rawat was an outstanding soldier. A true patriot, he greatly contributed to modernising our armed forces and security apparatus. His insights and perspectives on strategic matters were exceptional. His passing away has saddened me deeply. Om Shanti. pic.twitter.com/YOuQvFT7Et

It’s deeply painful for me to learn of the loss of lives in the chopper crash. I join the fellow citizens in paying tributes to each of those who died while performing their duty. My heartfelt condolences to the bereaved families.

Union home minister Amit Shah saying, “A very sad day for the nation as we have lost our CDS, General Bipin Rawat Ji in a very tragic accident. He was one of the bravest soldiers, who has served the motherland with utmost devotion. His exemplary contributions & commitment cannot be put into words. I am deeply pained.”

I also express my deepest condolences on the sad demise of Mrs Madhulika Rawat and 11 other Armed Forces personnel. My thoughts are with the bereaved families. May God give them the strength to bear this tragic loss.

Praying for the speedy recovery of Gp Capt Varun Singh.

Minister for road transport and highways Nitin Gadkari said “India will always remain grateful to CDS Gen Bipin Rawat for his impeccable service to the nation at the most crucial moments”.

I pray to almighty to give courage and strength to the families to bear the irreparable loss and wish for the speedy recovery of the injured.
Om Shanti

I extend my condolences to the family of Gen Bipin Rawat and his wife.
This is an unprecedented tragedy and our thoughts are with their family in this difficult time.
Heartfelt condolences also to all others who lost their lives.

India stands united in this grief.

Note: This is a developing story and is being updated as details come in.