High resolution imagery acquired by European Space Imaging the day after the strike suggests that buildings at the Jaish camp were not visibly damaged or destroyed. 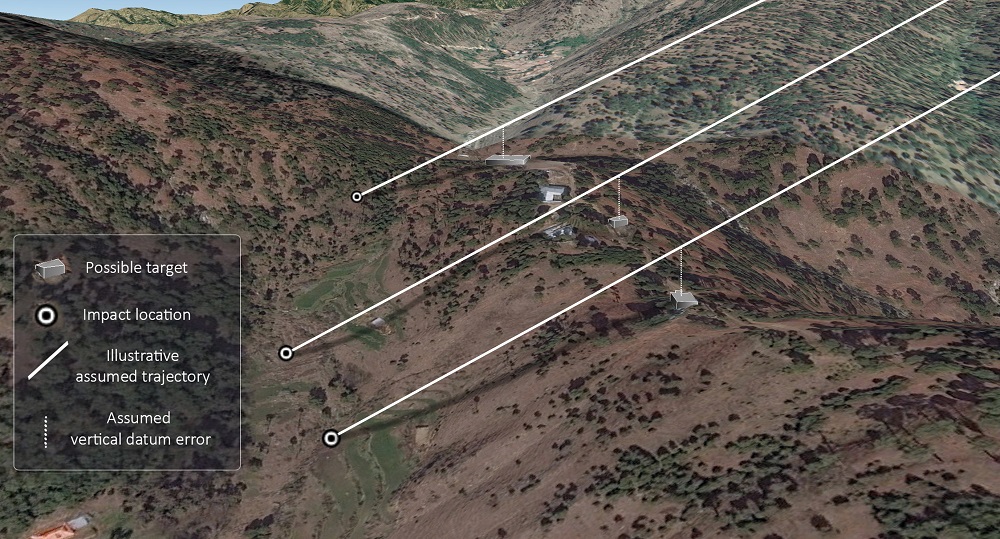 Ever since the stunning US success in the 1991 Gulf War, we have increasingly come to take precision bombing for granted. While militaries may sometimes misidentify a target, we assume that they can precisely hit what they are aiming at. ‘Precision strike’ is supposedly a proliferating, off-the-shelf commodity.

But India’s recent airstrike on a purported Jaish-e-Mohammad terrorist camp in Balakot in Pakistan on February 26 suggests that precision strike is still an art and science that requires both practice and enabling systems to achieve the intended effect. Simply buying precision munitions off the shelf is not enough.

Indian news media outlets have cited unnamed ‘senior military officers’ as saying that the Indian Air Force used the Israeli SPICE 2000 weapon to target four buildings at a terrorist camp in Balakot. The SPICE 2000 is the Israeli analogue of the US JDAM (joint direct attack munition), the weapon that has become the mainstay of coalition airstrikes in the Middle East. The SPICE 2000 is essentially a strap-on guidance kit that can transform a 2,000-pound ‘dumb’ bomb into a very precise way to deliver more than 400 kilograms of high explosives at a range of up to 60 kilometres. The weapon can be both GPS- and electro-optically guided. A 2,000-pound bomb causes substantial damage to structures.

Also read: What Will Be the Strategic Ripple Effects of Balakot?

Controversy has raged over whether India hit its intended targets. The Indian narrative has insisted that the strikes did hit their targets, ‘killing a large number of terrorists’. Indian Air Chief Marshal B.S. Dhanoa remarked, ‘If we plan to hit the target, we hit the target.’

The Indian narrative has also suggested that the strike used a SPICE 2000 variant with a reduced amount of explosive and the ability to penetrate through several floors of a building and even underground before detonating. This argument claims that such a weapon would only create a small entry hole and, while it would kill all occupants, it wouldn’t destroy the target building.

However, publicly available imagery acquired by European Space Imaging the day after the strike suggests that buildings at the camp were not visibly damaged or destroyed (see image below). This imagery, which is of a higher resolution than that available previously, shows conspicuously undamaged roofs that are not consistent with either a SPICE 2000 strike or a strike with other munitions. We believe that even a weapon with reduced explosive fill would cause damage to buildings that would be identifiable in the satellite imagery. 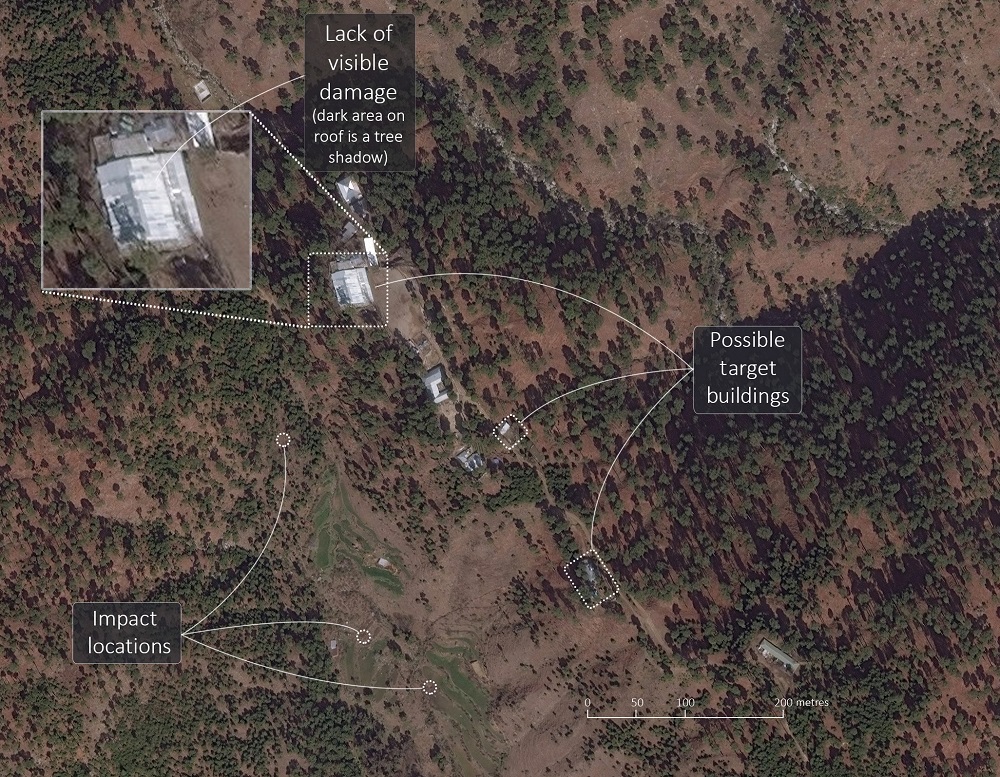 We suggest a possible alternative explanation.

One of us (Nathan Ruser) has previously published imagery identifying likely impact sites and comparing their locations with the locations of likely targets. The locations of the weapons’ impacts can be independently verified through three separate sources. First, photos taken by local journalists of impact craters have been geolocated by matching features visible in the images to features visible in satellite imagery.

Second, our previously published analysis of infrared satellite imagery indicates three circular areas – each roughly 30 metres in diameter – in which vegetation disappeared in the two days either side of the strike and which are consistent with explosive impact sites.

Finally, the images taken the day following the airstrikes and published by European Space Imaging allow for a higher resolution optical analysis, which indicates disturbances and craters in the areas previously identified as the likely impact locations.

Also read: Balakot and After, or How to Build a Strategic Doctrine for Political Gain

There are two striking aspects to the images. The first is that all three weapons missed by similar (but not identical) distances, and certainly by much more than the three metre ‘circular error probable’ attributed to the SPICE 2000. The second is that all three weapons missed in virtually the same direction. These two factors suggest that the misses were caused by a systematic targeting error.

The strike could have relied on the SPICE 2000’s electro-optical guidance capabilities, but that would have required significant targeting support, including the development of topographically and architecturally precise modelling to program and guide the weapon. It is not a simple process and is dependent on considerable pre-strike imagery-collection and targeting infrastructure. It is likely that the Indian Air Force opted instead to rely solely on the weapon’s ‘set and forget’ GPS capabilities.

It is important to note two characteristics of GPS-guided weapons. The first is that GPS coordinates have three dimensions: elevation, latitude and longitude – something we tend to overlook in everyday life when we navigate using a mobile phone’s GPS function. Second, a glide weapon like the SPICE 2000 doesn’t fall vertically to its target; it follows an inclined trajectory. Therefore, an incorrect vertical coordinate will result in the weapon missing as surely as an error in latitude or longitude.

Such errors can occur for various reasons, including by neglecting to convert coordinates from one coordinate system, or datum, to another (a datum shift). One potential candidate in this case is the difference between GPS ellipsoidal height and orthometric height based on mean sea level (see here for an explanation). In northeastern Pakistan, the difference is around 33 metres, although in many areas the difference is not precisely mapped so it may be larger or smaller at a point such as Balakot.

One explanation for the miss is that the SPICE 2000 bombs were incorrectly programmed to fly precisely into GPS points that were, say, 33 metres above their intended targets (the buildings on top of the ridge line). They performed as programmed and then continued on their trajectories until they struck the valley beneath.

The image below correlates the identified impact sites, the buildings that were the likely targets and a discrepancy between ellipsoidal and orthometric height which we have assumed to equate to 33 metres above the target buildings. Presented in 3D, this correlation results in consistent, parallel trajectories indicating a consistent targeting error. The differences in the impact distances from the intended targets are accounted for by the steep terrain and the differences in elevation between the impact sites. While this diagram does not necessarily represent the actual trajectories of the missiles, it does suggest a systematic targeting error caused by the use of different vertical datums. 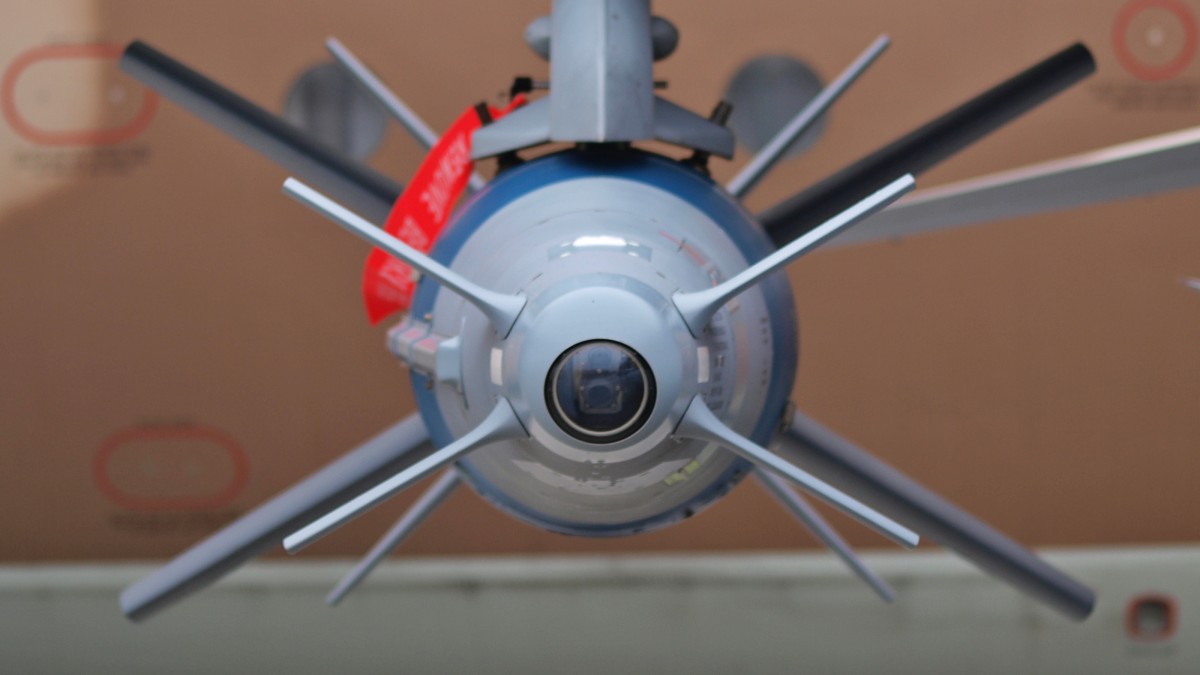 This explanation is lent further credibility by the fact that the resultant trajectories point back towards where India has claimed the weapons were launched from, just on the Indian side of the border.

This may not be the actual explanation. In a strike system that consists of French jets, Israeli weapons, US GPS and a targeting system that potentially used maps based on an older local Indian datum, there are other ways in which incorrect information could have been introduced or data shifts could have been omitted.

Despite the proliferation of precision weapons, actually completing the strike ‘kill chain’ is still difficult. Some militaries, such as those of the US and Australia, have spent years developing the technologies and systems that enable precision strike and employing the skills required in actual operations. But proficiency should not be taken for granted. It takes more than the weapon itself to launch a successful precision strike.

Marcus Hellyer is ASPI’s senior analyst for defence economics and capability, Nathan Ruser is a researcher at ASPI’s International Cyber Policy Centre and Aakriti Bachhawat is a researcher with ASPI’s defence and strategy program.

This article originally appeared on The Strategist, run by the Australian Strategic Policy Institute (ASPI), and has been republished with permission.