So Who Are the 'Men in Shadows' Guiding Top Army Appointments?

Army chief Bipin Rawat may have benefitted from the 'invisible hands', but he should take a strong stance on keeping the army free from ideological penetration. 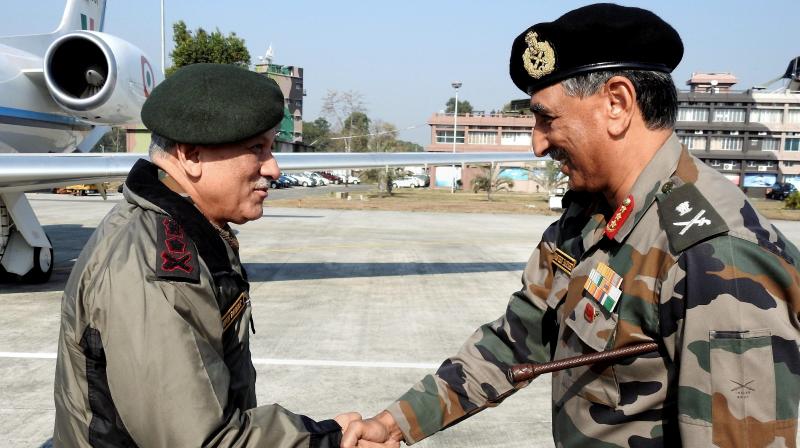 Muttering ‘All’s well that ends well’ with a sigh is all that is left for military watchers in the wake of the supersession episode. In the traditional media conference on the eve of Army Day, army chief General Bipin Rawat let on that he and the man he had pipped to the post, Lieutenant General Praveen Bakshi, who was his former boss in Kolkata when he served as corps commander in Dimapur, had assured each other of mutual support. This brings out the quality of character of the men involved and retrieves somewhat the image of professionalism of the higher ranks in the Indian army.

Unfortunately, this is not uniformly the case. Prior dust-ups over the army chief post have dented the idea of professionalism, leaving behind a poor image of the contenders for the job. The starring role goes to General V.K. Singh and his fracas with General Bikram Singh and General Dalbir Singh Suhag.

In Bikram’s instance, the case of a death in cross=firing during an encounter in which he was wounded as a brigadier in the Valley was made to resurface by a newly minted NGO, which disappeared from the public eye as quickly as it had appeared. V.K.’s brainchild, the Technical Services Division – reportedly an intelligence outfit that has since been disbanded – was implicated in this. To spike Suhag’s chances, the mishandling of an intelligence outfit under his command when he was the commanding general in Dimapur was trotted out.

In a new year’s eve address to officers at his headquarters in Fort William, Kolkata, Bakshi, who lost out in the recent race for army chief, is reported to have said that a ‘deep rooted conspiracy’ by ‘men in shadows’ accounted for his missing out on the promotion – an apparent reference to ‘intelligence games’ (or political ones) in the process of selection.

Bakshi reportedly said that he had expended Rs 85 crore of his special financial powers over the past 18 months as head of Eastern Command, in comparison to his two predecessors – both of whom went on to become army chief – who had spent a mere Rs 3-4 crore each. Among other things, this difference suggests two things: the self-confidence of Bakshi, befitting a prospective army chief, and, conversely, the play-safe attitude of his two predecessors.

Bakshi indicated that rumours were spread by certain parties over the accountability of such unusual – if legitimate – spending. With the rumours reaching the defence ministry, the spending was inquired into by the defence accounts and no wrongdoing emerged. To his mind, these rumours nevertheless influenced the government in overlooking his strong case, based not only on the traditional principle of seniority but also his sterling professional record. (Retrospectively, it may unfortunately be surmised that his two predecessors were wiser in adopting a ‘do nothing’ posture when at the penultimate step in the ladder to the top.)

For his part, defence minister Manohar Parrikar has clarified that the selection process was pristine. As a process, there is little to quibble over. He is also right in saying that if seniority was the only criterion then a computer could well substitute for the cabinet process. But, the question is that if the expenses withstood scrutiny, to what extent was the rumour-mongering effective?

Seemingly explaining his decision to stay on rather than hang up his spurs, as is the precedent in cases of supersession at his level, Bakshi has indicated that he is staying to clear his name by – or so the media alleges – exposing those behind the conspiracy, including those in the media and in the army veteran community.

While the exposure of such a nexus is necessary for the continued good health of the army, it should not be the preserve of Bakshi, the aggrieved party. He may scar himself in the process, going down in history as a sore loser. Instead, it is a cross the supposed – albeit unaware – beneficiary, Rawat, must bear.

Rawat’s move to become the 26th chief of the Indian army has been rather well choreographed. Media speculation has it that he caught national security advisor Ajit Doval’s eye when Doval had dropped out of the prime ministerial visit to Bangladesh in order to supervise the ‘surgical strike’ along the Myanmar border against Naga militants who had killed 18 soldiers in an ambush in Manipur in June 2015.

From Dimapur, Rawat moved to Mumbai as a stepping stone before taking over as southern army commander in Pune. This enabling of an operational command was presumably at the expense of Lieutenant General P.M. Hariz, who was then presiding over the training command in Shimla. Hariz replaced Rawat when Rawat was elevated as vice chief in the run up to his trotting across South Block to the army chief’s room.

Hariz could well have taken over the southern command prior to Rawat, with Rawat having to cool his heels in Shimla awaiting his turn. While there is no case for training command to be part of the musical chairs, unfortunately this is the reality, with 19 changeovers in the quarter century since its founding. Hariz’s staying put in Shimla was not as much a move to rule him out of the race as it was one to position Rawat better.

Since this happened way back at the beginning of last year, the writing has been on the wall since then. When these moves were afoot, conspirators – if Bakshi is to be believed – were at work pulling the rug from under him.

Irrespective of the cabinet process Parrikar refers to, given Doval’s charge in the national security sphere, it can be inferred that the intelligence czar, Doval, took the call.

A comprehensive debunking of the arguments made to back the government’s decision to supersede two able officers – ranging from operational experience to adeptness at surgical strikes and being savvy on the Line of Control – says much about the cabinet process touted by Parrikar.

The rumour campaign that Parrikar took cognisance of – enough to have an inquiry ordered – only reinforces his by now well-earned reputation of lacking good judgment. The campaign itself was an insurance to help the government sell its narrative on the unprecedented supersession of two generals. By that yardstick, it is simply not the work of over-enthusiastic subordinates but is better attributed to the congenital habits of men in shadows.

What about the sections of the media and veterans alleged to have played a role? The media’s role is not very clear and, in light of the manner sections of it purvey the cultural nationalist trope, should not in any case detain us overly. However, the spotlight should not escape army veterans with links to Doval, especially those belonging to his stable at the Vivekananda International Foundation (VIF).

On Christmas Day, two retired VIF-affiliated generals shared the dais with Rashtriya Swayamsevak Sangh luminaries in Pune. They potentially serve as a means of cultural transmission between Hindutva formations and the military. It is not improbable that, in turn, they informally input national security minders on military matters, not excluding, as it turns out, on vital military appointments.

The intelligence community is long known to have been compromised by such linkages. Is it now the military’s turn? The first observation of Army Veterans’ Day, preceding the Army Day this year, suggests yet another avenue has been forged for present-day politics to penetrate into the military. That V.K. is a government minister today is a warning of sorts on the veteran-political linkage.

As the dust settles, Bakshi would be well advised to serve the rest of his tenure with dignity, placing the onus on Rawat to clean up the stables. Rawat has gone on record to indicate that action will be taken should Bakshi voice his grievance formally. While procedurally sustainable, Rawat should know that more needs to be done.

Rawat needs to surprise his anonymous benefactors and disabuse them of any notion that the army is now in their corner. Comparatively, clamping down on whistleblowers on the army’s social practices is rather tame. Rawat should broadcast through precept and action that the army is off limits to ideological penetration. In this, tackling former comrades would be the easy part. What will test his moral mettle over his three-year tenure is getting his current political masters to acknowledge this.