As Govt Tells Amarnath Yatris, Tourists to Leave Kashmir, Valley Struck by Fear of the Unknown

In the wake of intelligence inputs of 'specific terror threats' to the pilgrimage, the state government has asked pilgrims to cut short their stay in the Valley.

An American-made telescopic gun recovered during an anti-militant operation on display during a press conference in Srinagar on August 2, 2019. Photo: PTI/S.Irfan

Srinagar: A fresh advisory issued by the Jammu and Kashmir government asking Amarnath Yatra pilgrims and tourists to cut short their stay in Kashmir has added to fears that the Centre might soon take major decisions on the state.

The fresh order from the state home department, which cited the “prevailing security situation” in Kashmir and “intelligence inputs of terror threats” while issuing the direction to the pilgrims and tourists, comes days after the Centre rushed additional troops to the restive region.

The Valley has been in a state of panic for the past one week with the fresh troops triggering speculation that the Narendra Modi-led government might abrogate Article 35A that defines the state’s permanent citizens and grants them exclusive rights.

Also read: 2019 Is Proving to Be Another Bloody Year in Kashmir: Report

Though both the Centre and administration in J&K, which is under the President’s rule, have tried to play down the troops’ deployment, the fresh order has added to the alarm.

At a press conference in Srinagar on Friday, the army also said it had recovered a Pakistan-made mine and a huge cache of arms from along the Amarnath Yatra route.

Searches were launched along the pilgrimage route, Lt Gen K.J.S. Dhillon said in a joint briefing by security forces in Srinagar, during which a huge a cache of arms was recovered. This haul includes a mine with a Pakistan Ordnance Factory stamp and an American sniper rifle M-24, he said.

‘Return as soon as possible’

The one-page security advisory issued by principal secretary home, Shaleen Kabra, asked Amarnath Yatris and tourists to curtail their stay in the Valley “immediately” and take necessary measures to “return as soon as possible”, in the wake of intelligence inputs of “specific threats” to the pilgrimage. 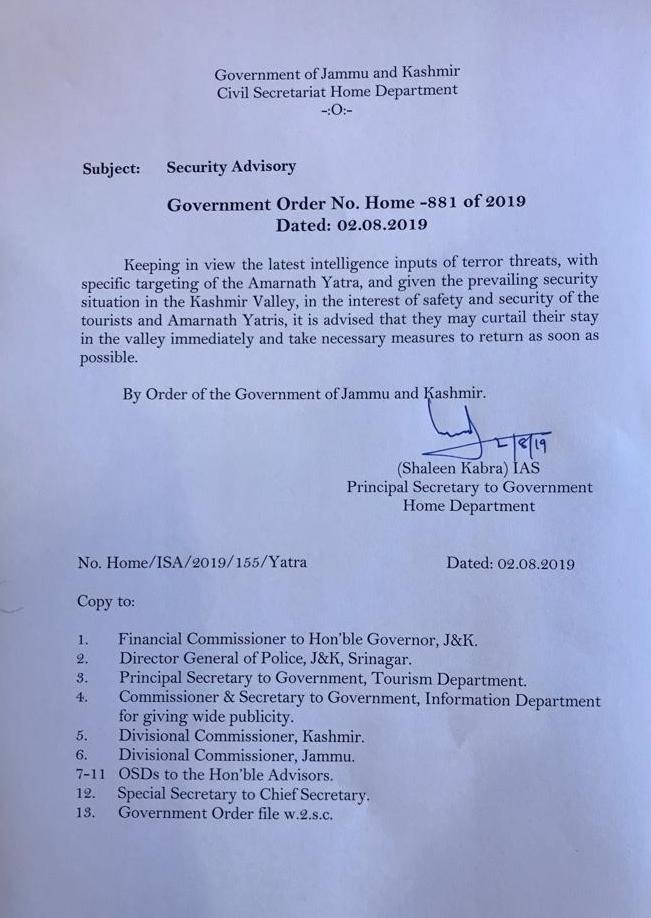 The order issued by the Jammu and Kashmir government.

“Yes, we have issued the advisory,” Kabra told The Wire. He, however, refused to divulge more details or talk about the rumours rife in the Valley.

A senior official in the home department said that top officials of the security grid were likely to meet later in the evening. However, he said he had no idea about the agenda of the meeting.

The annual Amaranth Yatra commenced on July 1 and was scheduled to end on August 1. However, on July 31, the state administration suspended the Yatra till August 5, owing to weather forecasts.

“In view of inclement weather conditions, shooting of stones and landslides particularly in Jammu region, the Yatra will remain suspended till August 4, 2019,” an SASB spokesperson had said.

But the advisory took people by surprise since the weather has been fairly dry except for early morning shower in Kashmir on Thursday morning.

On the other hand, Kashmir is in the midst of tourist season. The period from May to September sees the maximum number of tourists, both domestic and foreign, visit the state. Even on Friday, taxis were seen ferrying tourists from Srinagar airport to hotels near the majestic Dal Lake.

“The developments which have taken place for the past few days are scary, but there is no clarity,” said the official.

Although this unprecedented order would seem to suggest a genuine fear of a massive terror strike directed at Amarnath ji yatris or/and tourists this will do nothing to dampen the sense of fear & foreboding that prevails in the valley at the moment. https://t.co/qF99X0nAx6

The reports are already doing rounds that the Centre might struck down Article 35A of the constitution of India or tinker with Article 370.

While Article 370 accords special identity to J&K, Article 35A empowers the state’s legislature to define its permanent residents, granting them exclusive privileges including citizenship rights, right to property, employment and settlement.

J&K governor Satya Pal Malik and officials from the state administration have refuted the rumours that the Valley will be locked down in the coming days.

“I assure you that there is no plan at any level to abrogate Article 35A this time. All what you are hearing are rumours being spread by some people with vested interests,” the governor told reporters on the sidelines of a function in the summer capital on July 31.

The deployment of troops

A week after Union ministry of home affairs cleared the deployment of 10,000 troops, the Centre decided to send 28,000 additional paramilitary troops to the Valley on August 1.

The July 25 order had detailed that the troops were was meant to strengthen the counter-insurgency (CI) grid and maintain law and order situation in the state. But no reason was given for the deployment of over 280 additional companies on Thursday, PTI quoted sources.

On Friday, the MHA said that the deployment was based on the “security situation” in the Valley and “requirements of rotation, and that such things are not discussed in the public domain”.

“Based on assessment of the internal security situation, training requirements, the need for paramilitary troops to be rotated for rest and recuperation, induction and de-induction of central forces is a continuous and dynamic process,” it said.

The fear of unknown

People in conflict-ridden Kashmir rarely get an occasion to celebrate. Eid-ul-Adha, which is round the corner, provides such an occasion.

But this time, fear of the unknown has overshadowed preparations for Eid. In many area, locals have already started panic-buying essentials, linking the deployment of additional forces to apprehension of the deterioration in law and order situation.

“What else explains it?” asked Ishaq Ahmad, a government employee. “It seems they (government of India) have to take some major decision on Kashmir and they apprehend it will lead to deterioration of the situation and hence more forces have been sent to choke the Valley.”