Airstrikes, Day 2: As Escalation Kicks In, Here's What We Know So Far

Pakistan first said it shot down two Indian Air Force jets and taken two pilots into custody, but later scaled this claim back to one jet and one pilot. India acknowledged the shooting down of one plane but said it had shot down a Pakistani jet as well. 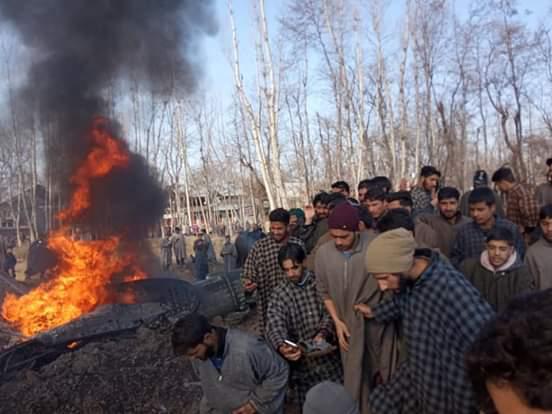 Wreckage of Indian Air Force helicopter at Budgam near Srinagar. The cause of the crash is not known but the Pakistani military said it had nothing to do with the crash. Credit: Twitter

New Delhi: A little over 24 hours after Indian Air Force jets bombed what India described as a Jaish-e-Mohammad training camp in Balakot, Khyber-Pakhtunkhwa, Pakistan did what it had promised to do even before the Indian airstrike: retaliate, and do so in a “surprising” manner.

On Wednesday morning, Pakistani Air Force fighters entered Indian airspace at a couple of locations, dropping ordnance at a “non-military target” in the Rajouri sector of Jammu and Kashmir.

And just as most analysts had predicted when the possibility of an Indian military response to the Jaish suicide attack on a CRPF convoy in Pulwama was first being discussed, the confrontation between India and Pakistan has already gone up two notches with the Pakistani side claiming to have shot down two Indian fighters over Pakistani airspace and “arrested” their pilots. By the end of the day, however, Pakistan has dialled its claimed back – to having downed Indian one plane and captured one pilot.

The Pakistani foreign ministry issued a statement saying the PAF “undertook strikes across [the]  Line of Control from within Pakistani airspace.”

What targets did the PAF hit?

According to the Pakistani foreign ministry, its action “was not a retaliation to continued Indian belligerence” and therefore involved “strikes at [a] non military target, avoiding human loss and collateral damage.” Giving more details, Major General Asif Ghafoor of Pakistan’s Inter Services Public Relations said the PAF jets locked some Indian military facilities in their targets but “having acquired them and shown our capability, we fired at uninhabited locations” so as not to escalate, he said.

The MEA said nothing of any locations being hit by the PAF, insisting that “due to our high state of readiness and alertness, Pakistan’s attempts were foiled successfully.” However, the district commissioner of Rajouri, Mohammad Aijaz, told reporters that Pakistani jet fighters violated Indian air space and dropped bombs at four deserted spots near the LoC in Nadian, Laam Jhangar, Kerri in Rajouri district and Hamirpur area of Bhimber Galli in Poonch. He said that a 9-year-old child was injured.

What purpose did Pakistan serve by hitting an empty field and forest?

Unlike India, which said it struck the Jaish-e-Mohammad at one of its training facilities on Tuesday, Pakistan had no such targets on the Indian side that it could even remotely associate with acts of terror against its territory.

Its foreign ministry, therefore, said  the “sole purpose” of its air action today was “to demonstrate our right, will and capability for self defence.”

What about the Pakistani  claim that ‘two Indian jets were shot down’?

At 11;19 am, Pakistan’s military spokesperson, Major General Asif Ghafoor said that the Indian Air Force had crossed the LoC in response to Pakistan’s airstrikes and that the PAF had shot down two Indian planes.

He said that one of the aircrafts fell on the Pakistani side, in ‘Azad Jammu Kashmir’ or Pakistan-occupied Kashmir, while the other fell inside the Indian side.

The MEA acknowledged that one Indian plane, a MiG 21 was shot down by the Pakistani Air Force and its pilot was “missing in action”.

By evening, Maj Gen Ghafoor also scaled back his claim to one plane and one pilot.

Is an Indian pilot now in Pakistani custody?

Major General Ghafoor’s tweet also said that one Indian pilot had been “arrested” by Pakistani troops on the ground. At his press conference, he said two pilots were taken into custody. One of them, he said, was injured and sent for treatment. Maj Gen Ghafoor showed what he said were documents recovered from the pilots but it is impossible to verify what they were. He did not identify the pilots by name.

The Indian government says one pilot is MIA.

If the Pakistani claim is true, the pilots would be the first Indian airman to captured by Pakistan since 1999 when a MiG-27 piloted by Flight Lieutenant Kambampati Nachiketa was shot down over Kargil by a Pakistani missile. Squadron Leader Ajay Ahuja, flying a MiG 21 was also shot down while attempting to locate Nachiketa. The Pakistanis claimed Ahuja died in the downing while the Indian side alleged he was shot and killed after being captured.

Nachiketa was sent back to India after about a week via the International Committee of the Red Cross.

What about the Indian aircraft which crashed in Budgam near Srinagar?

An IAF helicopter crashed near Budgam in the Kashmir valley on Wednesday morning. The cause of the crash is not known. Maj Gen Ghafoor referred to an Indian aircraft having crashed on the Indian side but said it had nothing to do with Pakistan.

Has a Pakistani plane also been shot down by the IAF?

In his press conference, Maj Gen Ghafoor denied any F-16 had been shot and added that in the PAF’s operations on Wednesday morning, no F-16 was deployed. But he did not say that no Pakistani plane had been shot down.

How have these aerial incursions affected civilian air traffic?

With incursions, airstrikes and aerial dogfights over a potentially wide arc, India shut down civilian flights over Punjab and Jammu and Kashmir as a precautionary measure on Wednesday morning.

There are also reports of international flights being diverted because of the tension between India and Pakistan:

International flights that transit between Indian and Pakistani airspace now being affected. Some flights returning to origin, while others appear to be seeking alternate routing. https://t.co/sXbkX0qrGI pic.twitter.com/tojnJCii4w

Will there be further escalation?

The Pakistani foreign ministry statement on Wednesday morning said Islamabad has “no intention of escalation, but are fully prepared to do so if forced into that paradigm. That is why we undertook the action with clear warning and in broad daylight.”

It accused India of  “trying to establish what they call ‘a new normal’ a thinly veiled term for doing acts of aggression at whatever pretext they wish on a given day” and said it would respond.

“If India is striking at so called terrorist backers without a shred of evidence, we also retain reciprocal rights to retaliate against elements that enjoy Indian patronage while carrying out acts of terror in Pakistan. We do not wish to go to that route and wish that India gives peace a chance and to resolve issues like a  mature  democratic nation.”

At the end of his briefing, Maj Gen Ghafoor said Pakistan and India needed to talk to each other.

India has given no indication that it intends to repeat a Balakot type airstrike and political signalling from government ministers and RSS leaders about the killing of the CRPF jawans at Pulwama having been avenged also suggests the airstrike has served its primary military and political purpose.

But the fact that the IAF has lost one jet and that one pilot is now in Pakistani custody opens the door for creeping and unpredictable escalation.

Note: This story has been constantly updated through the day