Apart from triggering a fresh round of violence, Saturday's killing will reignite debate on the need for proportionate methods of responding to violent street protests in the Valley. 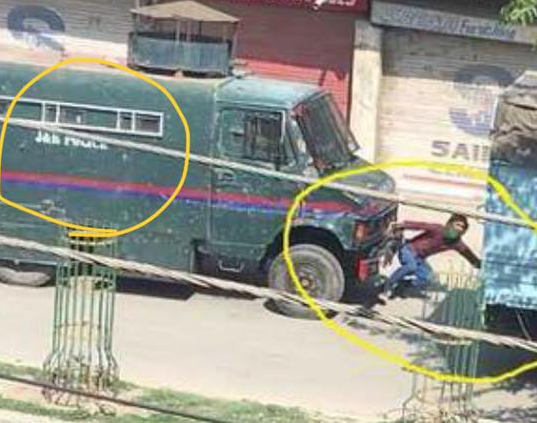 Screen grab from video of police van running over a stone throwing youth in Srinagar on Saturday morning. Credit: Facebook

Srinagar: The death on Saturday of a youth throwing stones on police and paramilitary vehicles returning from an encounter with militants is likely to reignite the debate over the permissible use of force after a video surfaced of a police van running him over in what appeared to be a deliberate act.

News of the death of Adil Ahmad Yadoo of Gasi Mohalla Safa Kadal on Saturday afternoon triggered spontaneous clashes in downtown areas of the city in which more than two dozen people were injured.

The incident took place in the morning in Noorbagh Chowk, less than a kilometer away from an encounter site in the Chattabal area where three Lashkar-e-Tayyaba militants were gunned down by security forces.

There were reports of stone pelting from different areas adjoining the encounter site from early morning, as youths emerged on the streets to throw stones on the forces involved in the gunfight and help militants escape – a common trend in the Valley in recent months.

In the 57-seconds video shot from a house overlooking the street, a group of youths are seen running after a CRPF vehicle and a J&K police mobile bunker vehicle (MBV), while pelting stones at them.

Three of the youths overtake the MBV and throw stones at the CRPF vehicle which is ahead. That is when, as can be seen from the 34” mark in the video, the police vehicle swerves to the left, hits Yadoo from behind and runs over him.

The youth, believed to be 18-years-old, was rushed to SMHS hospital where doctors declared him dead on arrival. “We tried to resuscitate him but it was too late. He had suffered internal injuries,” a doctor said.

In a statement issued in the evening, the police said Yadoo died in a “road traffic accident”. “In this regard a case has been registered at police station Safakadal under relevant sections of law and proceedings have been initiated against the police vehicle/driver which was involved in the accident,” the statement said.

In a tweet soon after the incident, and before the video went viral, the police urged people not to “pay heed to rumours” about what it said had been a “a road traffic accident”.

One person identified as Adil Ahmad Yadoo was brought to SMHS hospital whom doctors declared brought dead . Medical bulletin suggests that the person died due to a crush injury in a road traffic accident at noorbagh. Citizens may not pay heed to rumours.@JmuKmrPolice

In a subsequent message, the police stuck to the “road accident” line but said legal action was being taken.

Police has taken cognizance of the noorbagh road accident incident of today. Necessary legal action involving the police vehicle has been initiated.@JmuKmrPolice

By the time Yadoo’s body was brought out of the hospital, a large crowd of people had already assembled there, raising slogans for the independence of Kashmir.

While the crowd wanted to offer funeral prayers for him at the hospital premises, a contingent of the J&K Police arrived to take possession of the body, triggering clashes.

An eyewitness, who identified himself as Manzoor Ahmad from Pulwama, said the police fired teargas shells into the crowd. “Some angry youth retaliated with stone pelting… there were slogans and amid the chaos the police took possession of the body and left the spot,” said Ahmad who was attending to a cousin who was admitted in the hospital.

“His (Yadoo) brother and other relatives pleaded with the forces to let them take the body home for last rites but they didn’t listen to them,” said Ahmad.

The police handed over the body to the family at 6 pm and later thousands of people attended his funeral at the Eidgah “martyr’s graveyard”.

As the video circulated through the Valley, there was widespread anger at what people described as Yadoo’s “murder”. “How a murder was committed by the forces today and then brazenly denied!,” Hurriyat leader Mirwaiz Umar Farooq tweeted.

“Is there no sense of humanity left in India?” he asked in another tweet.

A prominent businessman from the Valley, Mubeen Shah, wrote on Facebook: “Firstt kill us by bullets and pellets and now by their vehicles.”

In the evening, an official statement released by the information department said chief minister Mehbooba Mufti took “strong note” of Yadoo’s death and had directed the police to “take legal cognizance of the incident and punish the guilty found involved in the incident”.

Greater Kashmir reported that a case under section 304-A of the Ranbir Penal Code – for causing the death of a person by a rash or negligent act not amounting to culpable homicide – had been registered and that the driver of the MBV had been detained.

Since the mass violence which erupted in the Valley following the killing of militant commander Burhan Wani in an encounter in July 2016, state and Central forces have come under pressure to find proportionate means of responding to violent protestors who are unarmed but have proven capable of using stones and other projectiles against the police and paramilitaries. Earlier this month, two men from the Central Reserve Police Force (CRPF) were run over and killed in Kokernag, south Kashmir, when heavy stone pelting led the driver of a CRPF truck to lose control of his vehicle.

While commanders, including the army chief, have warned civilians of deadly consequences if they interfere with counter-insurgency operations, the crowd control weapon of choice is the pellet gun. However, hundreds of Kashmiris have been blinded by the use of pellets, prompting a debate on the need for a less lethal and indiscriminate method of crowd control.

Hurriyat leaders called for Sunday to be observed as a day of protest. Reports from Srinagar on Sunday morning indicate the authorities have snapped internet services in the valley.