It's sweet to get results that surprise scientists, sweeter when local researchers are involved – and even sweeter to be reminded we haven't been entirely left behind in non-theoretical particle physics research. 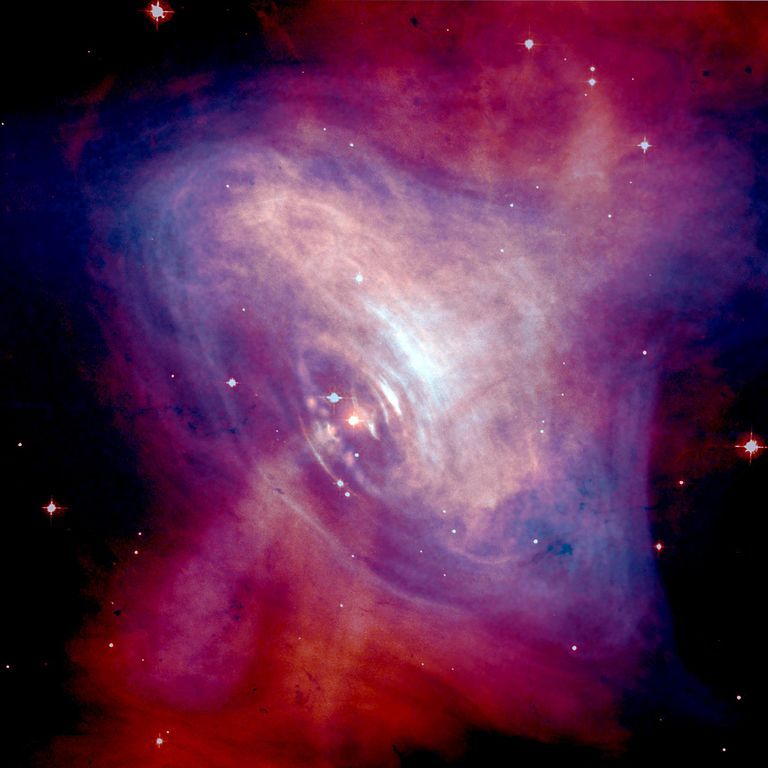 A composite image of the Crab Nebula showing the X-ray (blue), and optical (red) images superimposed. The size of the X-ray image is smaller because the higher energy X-ray emitting electrons radiate away their energy more quickly than the lower energy optically emitting electrons as they move. Caption and credit: NASA

An instrument onboard the ISRO Astrosat space-telescope has studied how X-rays being emitted by the Crab pulsar are being polarised, and how such polarisation varies from one pulse to the next. This is very important information for understanding how pulsars create and emit high-energy radiation – information that we haven’t been able to obtain from any other pulsars in the known universe. The underpinning study was published in Nature Astronomy on November 6, 2017.

Quick recap: CZTI stands for the Cadmium Zinc Telluride Imager, a 16-MP X-ray camera and, as The Wire has discussed before, one of the best in its class – in the league of the NASA Fermi and Swift detectors and even better in the 80-250 keV range. Pulsars are rotating neutron stars that emit focused beams of high-energy radiation from two polar locations on their surface. (As it rotates, the beams sweep past Earth like a lighthouse sweeping past ships, giving the impression that it’s blinking, or pulsating). We study them because they’re extreme environments that can help validate theories by pushing them to their limits.

There are two things notable about the current study: how CZTI studied the pulsar and what it found as a result.

1. How – The Crab pulsar, the remnant of a star that went supernova in 1,058 AD, is located 6,500 lightyears away in the direction of the Taurus constellation. Second, pulsars – despite their remarkable radiation output – emit few X-ray photons that can be studied from near Earth. Third, the Crab pulsar has a rotation period of 33 ms (i.e. very fast). For these reasons, CZTI couldn’t just study the pulsar directly and hope to find what it eventually did. Whatever X-ray was collected would’ve had to be precisely calibrated in time. So the CZTI team* partnered up with the Giant Metrewave Radio Telescope in Pune and the Ooty Radio Telescope in Muthorai (Tamil Nadu) for the ephemeris data. In all, there were 21 observations made over (CZTI’s first) 18 months.

2. What – Like a Ferrero Rocher from hell, a pulsar is a rotating neutron star on the inside, wrapped in a very strong magnetic field. Astronomers think charged particles are accelerated by this field and the energy they emit is shot into space, as X-rays + other frequencies of radiation. So studying how these X-rays are polarised could provide more info on how a pulsar produces its famous sweeping pulses. The CZTI data had a surprise: hard X-rays are being emitted by the Crab pulsar in the off-pulse – or the-beam-is-not-pointing-at-us – phase. In other words, the magnetic field isn’t involved in producing these X-rays; the neutron star itself is. Dun dun duuuuuuun!

It’s always nice to get science results that send researchers back to the proverbial drawing board, like the CZTI result has. It’s sweeter still when local researchers are involved – and even sweeter to be reminded that we haven’t been entirely left behind in non-theoretical particle physics research. There’s even more X-ray astronomy in India’s future. After Astrosat, launched in September 2015, ISRO has okayed a proposal from the Raman Research Institute (RRI), Bengaluru, to build an X-ray polarimeter instrument that the org will launch in the future (date not known). Called Polix, it is similar to the NASA GEMS probe that stalled in 2012.