What Have We Learnt About Exoplanets From the Kepler Mission?

NASA's Kepler Mission has identified thousands of exoplanets but there are a lot of unanswered questions about these distant alien worlds how earth-like their environments are, if at all. 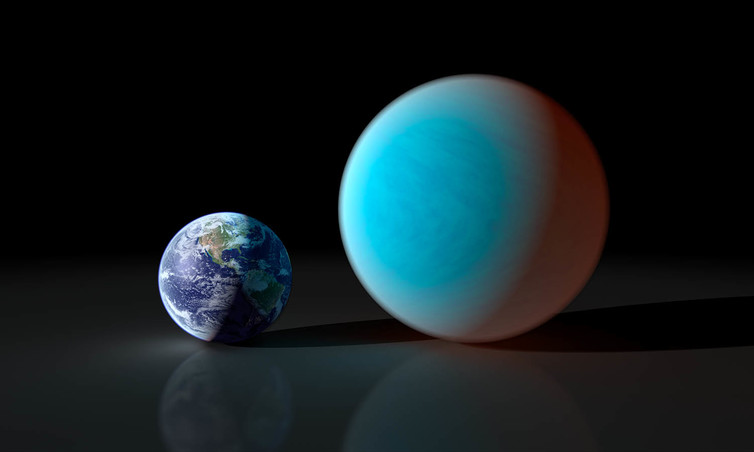 Earth and Super-Earth in an artist concept contrasts our Earth with the planet known as 55 Cancri e. Credit: NASA/JPL-Caltech/R. Hurt /Flickr.

On Monday June 19, NASA held a media briefing to announce the completed catalogue of exoplanets from the Kepler Mission.

The catalogue lists 4,034 exoplanet discoveries, including 219 new finds. Ten of these new worlds are close in size to the Earth and reside within their star’s habitable zone, a location that would permit liquid water on the surface of an Earth-like world.

These ten join roughly 40 other worlds found by Kepler as possible candidates for Earth’s twin. But is the prospect of another Earth really the Kepler legacy?

While planets had been discovered around other stars since the early 1990s, the launch of the Kepler Space Telescope in 2009 resulted in them being found in droves. As the numbers increased from tens to thousands of exoplanets, astronomers were able to identify types of planets and speculate on their frequency through our galaxy; Kepler had given us the ability to do statistics.

Our solar system suggests there are just two flavours of planet: terrestrial worlds like the Earth with rocky surfaces and thin atmospheres, and gas giants like Jupiter, whose solid cores are buried beneath thousands of kilometres of enveloping gases.

This neat, bimodal picture is taken to pieces in the Kepler Mission catalogue.

The catalogue contents reveal gas giants that orbit their star closer than Mercury, other worlds so hot their surface must be molten magma and planets around binary stars like Luke Skywalker’s fictional home world of Tatooine in the film franchise Star Wars.

But perhaps the most mysterious entries are the so-called super Earths.

Over two-thirds of the planets in the Kepler Mission Catalogue have radii of between 1.1 and four Earths, placing them between Earth and Neptune in size. These super Earths are the most common planet discovered, yet our own solar system has no analogue to tell us what such worlds might be like.

Are they terrestrial planets with rocky surfaces or mini gas giants with crushing atmospheric pressures? As interest has mounted in the prospect of finding a habitable planet, a key question is whether any of these worlds have a solid surface.

At the media briefing, NASA revealed that the Kepler Mission catalogue had produced a clue. A recent journal paper had spotted a split in the distribution of super-Earth planet sizes.

While planets with radii of around 1.3 Earths and 2.4 Earths are equally common, planets with sizes between 1.5 and two Earth radii are much harder to find. The astronomers speculate that this is the division between giant rocky planets and gaseous mini-Neptunes.

Although this strong divide in the super-Earth population has not previously been observed, its location agrees with the small number of planets we have bulk density measurements for. These density values suggest that planets larger than about 1.6 Earth radii have thick, Neptune-like atmospheres.

But while the Kepler Space Telescope can give us both sizes and locations for exoplanets, it cannot tell us anything about their past or present surface environment. We need theories to explain the different planet types identified within the catalogue.

One possibility for the split in the super-Earth population is that the rocky planets have had their atmospheres stripped by radiation pouring from a star. Alternatively, the rocky worlds may have formed later from the gas-rich planet-forming disc that dispersed before the planets could accrue a thick atmosphere.

We meet a similar problem for the 50 planets found within the habitable zone. Knowing only their size and location is not enough to determine if their surfaces are similar to the Earth.

A difference in geology could create a very different atmosphere to our own, or the inability to create protective magnetic fields to shield the planet from sterilising stellar flares. The temperature may even be perfect for liquid water, but the planet entirely dry.

Without being able to probe surfaces, the Kepler telescope was never designed to find a true Earth twin. Rather, the mission catalogue tells us that planets can form around nearly every star and exist in a huge variety of conditions.

The Kepler Mission spanned four years (2009 to 2013), exploring a patch of sky in the Cygnus constellation. In May 2013, the second of the telescope’s four gyroscope-like reaction wheels failed and it was unable to keep a stable position.

But the telescope continues to search the sky near the ecliptic plane (where the zodiac constellations lie), using radiation pressure from the Sun for positioning. This has become the K2 mission and has already found over 500 planets.

The Kepler Mission catalogue told us where to look, now we can begin to uncover what alien worlds are truly like.