Verlinde has been claiming since the start of the decade that dark matter is unnecessary to explain the effects that have been attributed to it – instead, he offers a 'more advanced' theory of gravity. 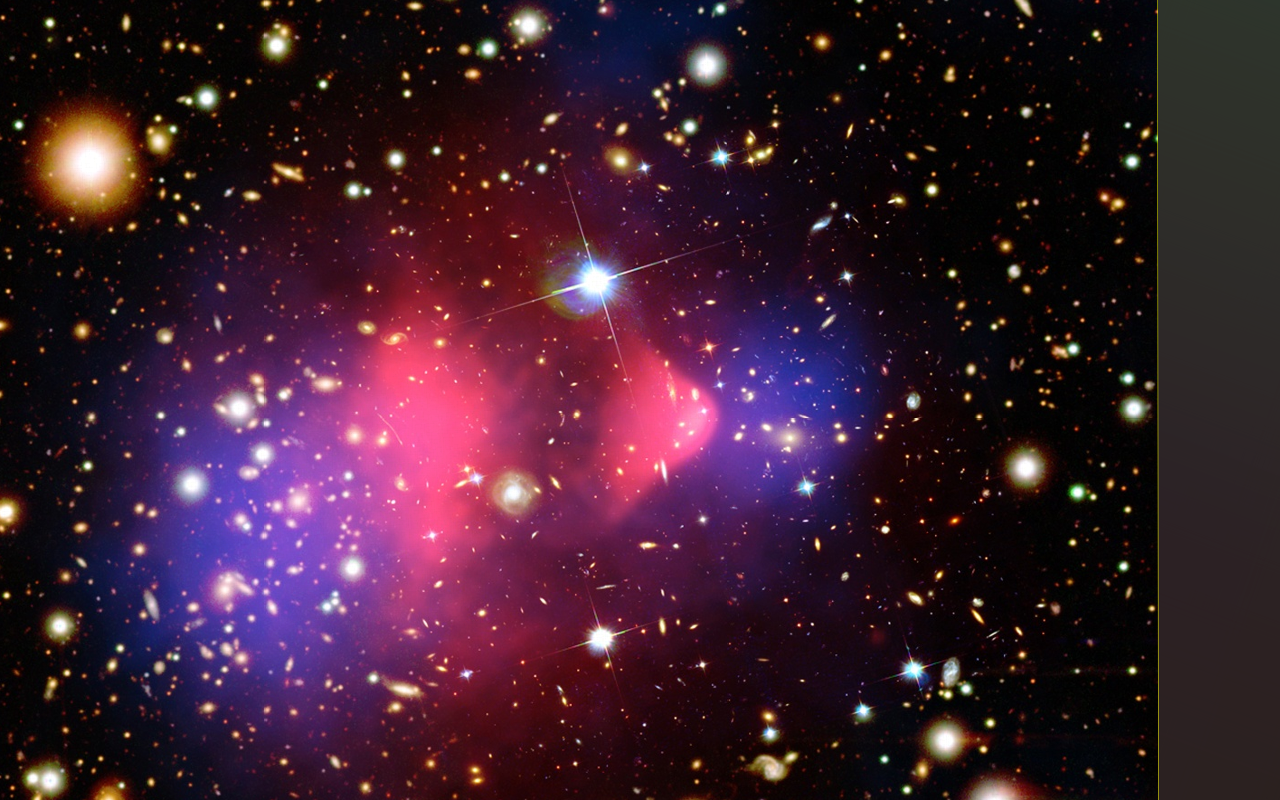 On September 23, 1846, Johann Gottfried Galle and Heinrich d’Arrest, two astronomers at the Berlin Observatory, discovered the planet later called Neptune. However, the discovery is attributed to the French mathematician Urbain Le Verrier, who used Isaac Newton’s theory of gravity to predict that Uranus’s strange orbit around the Sun could be accounted for if there was a planet in an orbit beyond it. And he was right.

On that Wednesday, or probably the day after, Le Verrier would’ve been thrilled: his first prediction of Neptune’s existence hadn’t brought him the attention he thought it would have; now, France wanted to call it ‘Le Verrier’s Planet’. Wanting to capitalise on this turn of fortunes, Le Verrier then shifted his gaze towards Mercury, which also had (and continues to have) a strange orbit.

Le Verrier’s success with Neptune was admittedly due to the Frenchman assuming that Newton’s laws were perfect. And after being rewarded for it, Le Verrier assumed once again that they would be able to explain Mercury’s orbital precession if there was another planet between it and the Sun. In 1859, he called it Vulcan. It hasn’t been found to this day. The precession problem was later resolved by Albert Einstein’s general theory of relativity, in 1915.

Le Verrier, in trying to solve a problem based on the assumption that a theory of gravity had to be right, predicted the existence of two new planets. One was found while the other knocked back against his assumption. Then again, predicting planets is one thing – predicting particles is entirely another.

Most cosmologists today concur that over 95% of the universe is made of mysterious entities called dark energy and dark matter. Neither has been found – but the belief in their existence has been multiply reinforced by different discoveries that imply their existence.

Multiple searches for these particles have turned up blank. But that doesn’t mean they’re not there: different experiments scan different energies of the universe for signs of the particles. If one range shows nothing, we move on to another, or even probe the same range with a more sensitive instrument. There is hope that something will be found. Something has to be, eh?

A Dutch string theorist named Erik Verlinde thinks otherwise. According to him, dark matter needn’t exist, that its supposed existence is because we haven’t explored Einstein’s theories fully. For Verlinde, dark matter is Le Verrier’s Vulcan, waiting to be corrected by a more advanced theory of gravity. He also claims he has the math to back himself up.

In January 2010, Verlinde submitted a paper to the arXiv pre-print server called ‘On the Origin of Gravity and the Laws of Newton‘. Another paper was submitted on November 7, 2016. In them, his thesis is that both “spacetime and gravity emerge together from the entanglement structure of an underlying microscopic theory”, that they are not fundamental properties of this universe itself but the product of a deeper mechanism we are yet to discover.

Specifically, he says in the 2010 paper that gravity is an entropic force: the product of a system that wants to increase its entropy – and moves away from it to claim it is now about entanglement. Entanglement is a quantum mechanical phenomenon in which some properties of two objects become interdependent such that, even if the objects are far apart, measuring the properties of one instantaneously changes the properties of the other.

Taking recourse through string theory, quantum information theory and blackhole astrophysics, Verlinde argues that the anomalous changes in gravitational forces found in large galaxies – attributed to dark matter – are because of normal matter’s complex interactions with dark energy. Specifically: that when some dark energy is displaced from its position and tries to move back to it, it pushes on matter – which is then perceived as a gravitational force.

On the crackpot index

The Czech theoretical physicist Luboš Motl isn’t buying it, however, and picked up on the flipflop. “Well, it can’t be an entropic force because whenever entropic forces act, the entropy goes strictly up so the entropic forces are intrinsically irreversible,” he wrote on his blog, “while a comet may be closer to the Sun, further from the Sun, closer to the Sun, and reverse things just fine.” Later, about the entanglement: “He doesn’t have any particular field theory model similar to Einstein’s equations or any other effective quantum field theory. To summarise, he doesn’t have any model at all” to explain what he’s doing.

This view was echoed by Columbia University mathematician Peter Woit: “I haven’t computed a John Baez crackpot index for this, but I’d suspect it’s pretty high.” The index, conceived by Baez – a mathematical physicist at the University of California, Riverside – in 1998, awards points to a physicist based on the fulfilment of thirty-seven checks. Woit probably gave Verlinde the full 50 points for #37: “for claiming you have a revolutionary theory but giving no concrete testable predictions”.

Some others are cautious, even hopeful. Mark Van Raamsdonk, a physicist at the University of British Columbia, Vancouver, has said Verlinde’s thesis is moving in “definitely an important direction”. In its early days, Robbert Dijkgraaf, director of the Institute for Advanced Study, Princeton, had told Verlinde: “Something is happening here and this is going to have an impact”. And it seems Verlinde himself doesn’t mind the criticism: he said in a 2013 interview that “if you change the way people think, it creates some resistance”.

Both Woit’s and Motl’s views are likely to be referenda on the integrity of the Dutch press, which has been playing up Verlinde’s ideas in a nationalistic frenzy (not very unlike India’s local press jumping on chances to play up Indian achievements). Woit in fact says in a comment on his blog that Verlinde’s peers will ignore his papers “no matter how much press it gets”. It hasn’t helped either that he received EUR 18.5 million (Rs 130 crore) in 2012 to set up a theoretical physics institute to continue his work, as well as EUR 6.5 million (Rs 45.8 crore) in grants and donations over the last few years.

What then about the press for a new experiment that claims to have verified the emergent gravity idea? For one, it is preliminary. For another, it doesn’t challenge the inability of Verlinde’s theory to explain some other cosmological phenomena that dark matter ought to be able to.

The experiment was performed by astrophysicists from the Leiden Observatory and led by Margot Brouwer, a PhD candidate. They calculated how more than 33,000 galaxies catalogued before 2015 curved the path of light around themselves (a consequence of Einstein’s general theory) – and used it to infer the strength of gravitational forces at work. When they compared their results to what Verlinde has predicted the strength of his emergent gravity will be, there was but a slight mismatch.

Brouwer told New Scientist: “But then if you mathematically factor in the fact that Verlinde’s prediction doesn’t have any free parameters [like Le Verrier had one in the form of Vulcan], whereas the dark matter prediction does, then you find Verlinde’s model is actually performing slightly better.” Yes, it is encouraging, but no, still not a revolution.

In another show of (inadvertent) support, three American physicists published a paper in the journal Physical Review Letters on November 9 – two days after Verlinde’s arXiv upload – suggesting that the acceleration of stars orbiting a galaxy’s centre could be predicted by normal (technically, baryonic) matter alone. This conclusion contests one of the fundamental motivations for dark matter, that it influences the acceleration, too.

All sorts to make a MOND

However, Brouwer’s experiment is only a very small start while the Americans’ paper has started to see alternative interpretations emerge for its data. If emergent gravity exists, and if Verlinde provides the underlying scientific model that will function as a substrate upon which his grander visions are founded, he will still have a way to go.

Verlinde, on his count, builds upon some of the ideas of the theoretical framework called modified Newtonian dynamics (MOND), pioneered by Israeli physicist Mordehai Milgrom. While MOND has been able to predict how the universe’s first massive galactic clusters and voids could have formed, it has been more controversial than the competing Lambda–Cold Dark Matter (LCDM) model, which does a better job of explaining the radiation emitted by galaxies, for example.

But cosmologists don’t know how LCDM could account for some of MOND’s correct predictions, nor do they know what MOND’s parent theory could be like so it can make room for the speed of light. This is why it is also significant for a theory like Verlinde’s to be able to explain experimental observations that push back on both MOND and LCDM ideas. A famous real example of this is the Bullet Cluster.

About 150 million years ago, in the constellation Carina, a smaller sub-cluster of galaxies (the ‘bullet’) began to pass through a larger one at 9.6 million km/hr, pummelling a small cloud of gas at 70 million degrees celsius into a larger one at 100 million degrees celsius. The stars of both galaxies were slowed down but were otherwise unaffected. The clouds of gas (i.e. normal matter) were slowed down even further by electromagnetic forces and emitted X-rays.

The dark matter, which by its (admittedly inchoate) definition interacts weakly with normal matter through the gravitational force, evaded the clouds and remained in two separate clumps. Effectively, the stars, the gas clouds and the dark matter all came away separately, leaving them exposed for individual scrutiny.

When scientists calculated where the centre of mass in the new scheme of things was, they found that it had become displaced by a distance that ‘normal’ gravity alone couldn’t explain. There had to be significant amounts of dark matter in the region. Milgrom then argued that MOND could explain the discrepancy – except that his results were off by a factor of 100 (although without a MOND-like theory in the picture, the discrepancy was closer to a factor of 10 billion).

On the other hand, X-ray and gravitational lensing data from the collision have showed up LCDM’s inability to explain the large velocity at which the clusters would have had to collide (although some studies – here and here, for example – have argued that the Bullet Cluster could be an exception to the rule). Other examples of similarly perplexing clusters are the Abell 520 and the MACS J0025.4-1222.

So even if Verlinde’s idea may have received a small leg-up through Brouwer’s gravitational lensing test, it is still very wanting in both theory and experiment. In fact, even if string theory does portend the post-empirical era – a time when a theory could be held to be real without it making any experimentally testable predictions – its theoretical underpinnings are still controversial at least.

Perhaps it is not yet Le Verrier’s Vulcan after all.

Note: On December 22, the response to the Americans’ paper was reworded to say “alternative interpretations” instead of “challenge”.