Rao succeeded Satish Dhawan and helped ISRO work more systematically, in the process leading a series of significant projects like the INSAT 2 and PSLV. 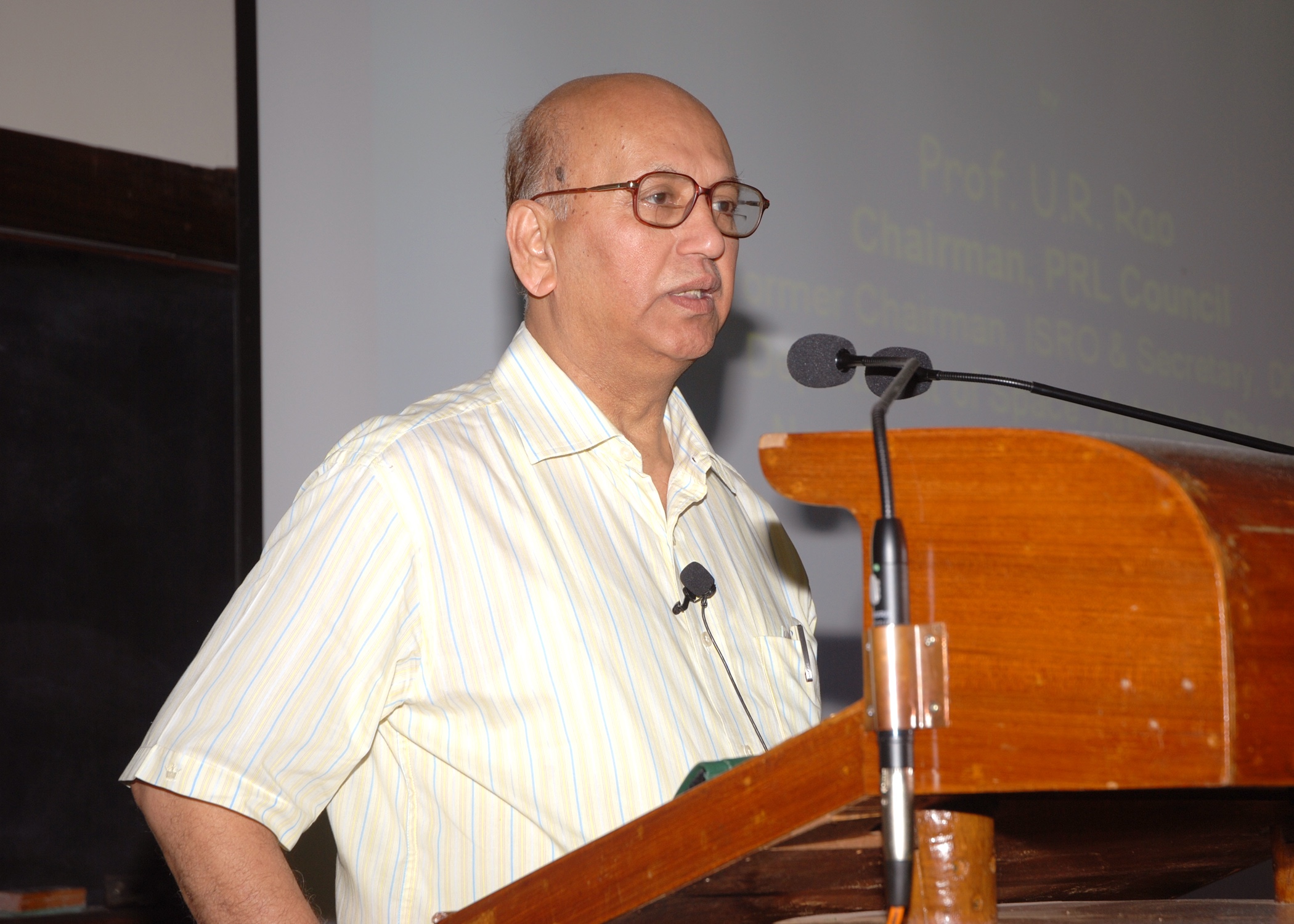 Udupi Ramachandra Rao, the renowned space scientist and former chief of the Indian Space Research Organisation (ISRO), passed away early July 24 in Bengaluru. He was 85.

Rao’s legacy at ISRO is difficult to miss. In his lifetime, he made great contributions to kickstarting India’s satellites programme; he was also part of the team that led the development of the SLV-3 rocket, which later evolved into the Polar Satellite Launch Vehicle (PSLV), and initiated work on the Geosynchronous Satellite Launch Vehicle (GSLV).

He was born on March 10, 1932, in Udupi’s Adamaru village, and obtained his masters in physics from Banaras Hindu University in 1953. In 1954, he registered as a doctoral student under Vikram Sarabhai and received his PhD from Gujarat University in 1960. In 1961, Rao began to teach at the Massachusetts Institute of Technology and later the University of Texas, Dallas. Simultaneously, he also conducted extensive research on electromagnetic radiation in space and, together with the NASA Jet Propulsion Laboratory, Pasadena, made important discoveries concerning the properties of the solar wind, a stream of radiation continuously emitted by the Sun into the Solar System, and the interplanetary magnetic field and galactic cosmic rays.

In fact, in what was quickly to become an illustrious and hectic career, Rao would publish over 350 scientific papers. Many of these were also based on his work as the principal investigator of four Pioneer and two Explorer satellites. In 1966, he returned to India to teach at the Physical Research Laboratory (PRL), Ahmedabad.

Meanwhile, in 1962, Jawaharlal Nehru had constituted the Indian National Committee for Space Research (INCOSPAR) under the guidance of Sarabhai. Though Rao was not among the first members of this committee, he worked with Sarabhai on many projects of the Indian space programme since its early days. One of the most popular projects with which Rao was associated Aryabhata, the country’s first satellite, launched in 1975. Shortly after that, he became the first director of the ISRO Satellite Centre, Bengaluru.

But Rao had already accomplished much by then. The development of the SLV-3, India’s first satellite launch vehicle, had been flagged off by Sarabhai in a document released in 1970 (a year before his death). Until that point, INCOSPAR had only launched sounding rockets, so to build and launch a full-fledged rocket weighing 20 tonnes was daunting. Sarabhai had also set INCOSPAR a tight deadline: he projected that the SLV-3 would launch the RS-1 scientific satellite from Sriharikota in mid-1974.

Taking over from Dhawan

The 1980 launch marked the beginning of an era in which India would make important strides in quick succession to grow its space programme.  Under Dhawan’s leadership in India and with significant US assistance, the INSAT-1A communications satellite was launched in April 1982. INSAT-1B was launched in August 1983 and INSAT-1C, in 1988. Rao was also present in Baikonur, Kazakhstan, when the Soviet Union launched India’s first astronaut Rakesh Sharma into space.

Also in 1982, the United Nations Committee on the Peaceful Uses of Outer Space convened the second UNISPACE conference in Vienna and invited all its member nations to participate. The Indian delegation was led by Rao, although his most important role during the conference was to settle a major dispute between the US, the UK, Canada, Australia and Luxembourg on the one hand and all other member nations on the other on the question of the militarisation of space. Rao was able to diffuse the situation through extensive negotiations. In the process, India came to be looked upon as a champion of the peaceful use of outer space as well as a flag-bearer for the causes of weaker countries.

Rao took over from Dhawan as ISRO chairman in October 1984, and it is after this point that Rao’s full range of contributions to the space programme emerge. Simply consider the projects that he led: ASLV, IRS, INSAT 2, PSLV and GSLV.

The ASLV, or augmented SLV, weighed more than twice as much as its predecessor, the SLV-3, and debuted the use of closed-loop guidance systems and the metallic bulbous heat-shield. It was also a tricky thing to operate. Rao wrote in his book India’s Rise as a Space Power (2014), “While all satellite launch vehicles are basically unstable vehicles, ASLV in particular is a highly unstable vehicle with its length to diameter ratio being quite large. The nature of ASLV is such that many of the critical events such as ignition of core stage, strap-on booster separation, etc. occur just around the tropopause of the atmosphere where the dynamic pressure is very high and winds/gusts, etc. could be extreme. Even under benign wind conditions, ASLV experiences almost twice the dynamic pressure compared to normal operational launch vehicles.”

After the first two developmental flights of the ASLV failed, Rao typified the spirit of ISRO’s commitment in a comment to the then prime minister, Rajiv Gandhi: “I will not be apologetic. However, I intend to assume full responsibility for the failure.” The ASLV D3 was successfully launched in 1992.

Between 1988 and 1995, ISRO also built and launched the first generation of IRS remote-sensing satellites under the National Natural Resources Management System. The IRS-1A, 1B, P2 and 1C satellites tracked changes in forest cover, biomass change, wasteland management, mapped land-use change, water aquifers, mineral deposits and aided in disaster management. IRS-P2 was named thus because it was launched by a PSLV rocket, on the rocket’s first successful launch in October 1994. Today, the IRS system is an integral component of India’s aspirations under the UN Sustainable Development Goals while the PSLV has become the vehicle on which ISRO has been riding to success.

Rao helped ensure all these tasks were carried out while also having to deal with the threat of severe US embargoes against all space-qualified components being launched by the USSR – a significant outcome of which was the indigenisation of many components. According to the Financial Express, he once said, “When we developed the space programme, we had a lot of international embargoes put on us. I used to be happy every time we had a new embargo as it forced us to invent a way out and develop our own solutions.”

He also oversaw the development of the second generation of INSAT communication satellites. By the time he retired from ISRO in 1994, the satellites had operationalised 63 transponders.

After retirement, Rao was actively involved in other areas of space research as an advisor and consultant, notably with the Aditya-L1 mission to study the Sun, the object he first started out investigating. But there was one bit of unfinished business that rankled him.

Start of work on the INSAT 2 satellites also marked the start of a turbulent time in Rao’s time as a leader. Every INSAT 2 series satellite was going to weigh over 2,000 kg, a mass that the PSLV wasn’t built to carry to the geostationary transfer orbit. To rectify this and make India self-reliant in launches, Rao initiated the GSLV and indigenous cryogenic engine programmes. At this time, ISRO negotiated a deal with the Soviet company Glavkosmos: the transfer of two 12-tonne C12 cryogenic engines plus extensive training of ISRO engineers by Soviet scientists, all for Rs 230 crore. To quote from his book,

“The GSLV project including the Soviet component was approved by the Space Commission and the Government in October 1990 at a total cost of just Rs 750 crore for three GSLV launches with two C12 engine stages fabricated in the Soviet Union with the participation of ISRO scientists and third build in India with Soviet technology. The first flight on a total success-based schedule was to take place in 1997.”

However, 15 months later, the US accused the GSLV programme of being in violation of the Missile Technology Control Regime. It threatened to impose a two-year ban on all licensed exports to India and Russia, all imports into the US from these countries and the suspension of all government contracts between them. Unfortunately, the US also threatened to impose these sanctions retroactively – which would have affected ISRO’s purchase of some components from American companies for its INSAT 2 satellites.

Rao had to intervene, and met with the then US Vice President Al Gore in 1993. The outcome of this meeting was the US willingness to remove the retroactive clause on a case-wise basis, but by this time, the Russian government, buckling under US pressure, terminated the Glavmoskos contract and left the GSLV programme in limbo. Soon after, the long and arduous task of mastering cryogenic engine technology began, followed by producing the first indigenous version.

But at the time Rao’s book was published, he hadn’t been satisfied with the rate of progress on it. He wrote, “After my superannuation in March 1994, the emphasis on developing our own cryogenic engine seems to have been significantly reduced. It is tragic that we are yet to succeed in flight testing [the engine], even after 18 years of struggle.”

The first indigenous cryogenic engine was successfully launched onboard the GSLV Mk III on June 5, 2017, finally wrapping up one bit of unfinished business from Rao’s time.