With them, "you can now move on from talking about the possibility of life on other planets to measuring the data on the planets. This is a major change." 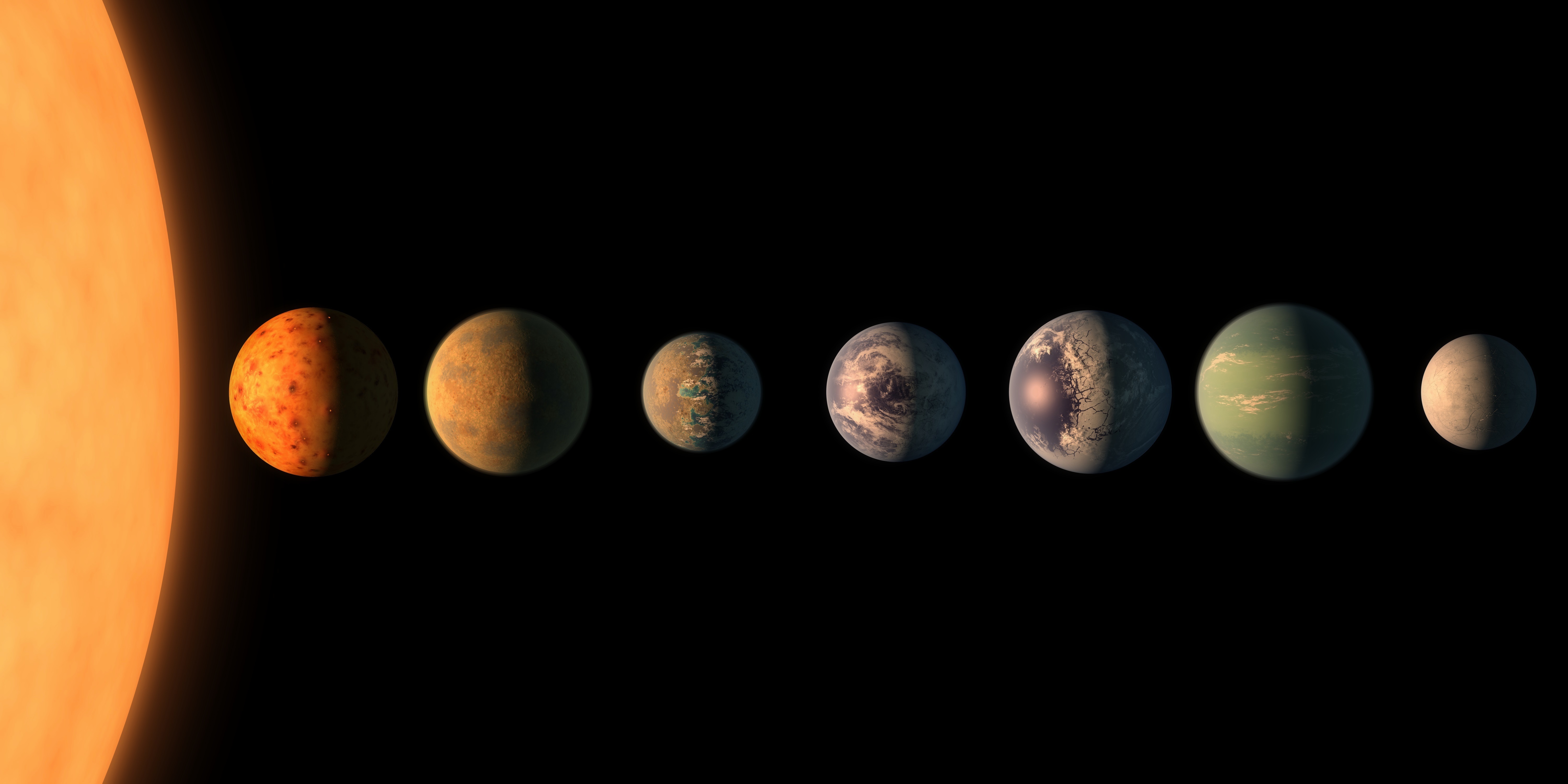 This artist’s conception shows what the planets of the TRAPPIST-1 planetary system may look like, based on data available about their diameters, masses and distances from the host star. Caption: Nature; credit: NASA/JPL-Caltech

In May 2016, astronomers announced the discovery of three rocky planets orbiting a star called TRAPPIST-1, about 40 lightyears from Earth. At the time, some had commented that these planets were the best targets for life outside the Solar System. Didier Queloz, an astronomer at the University of Cambridge, still thinks this is true. “The only way to study the question of life on other planets in the next decade will be to have a look at what’s going on in the atmosphere of a rocky planet, and it is a very difficult task,” he told The Wire. “We’re not even sure what to look at. And the only stars with which you hope to be able to do this are the ultra-cool dwarfs because they’re very small.”

TRAPPIST-1 is one such ultra-cool dwarf. It was discovered using the Transiting Planets and Planetesimals Small Telescope, Chile, and drew its name from the instrument. It is only slightly larger than Jupiter and much less brighter than our Sun, allowing scientists to better spot any planets that might be lurking in orbit around it. The astronomers who made the May 2016 announcement were encouraged by this to follow up their initial finding with more intense observations, using the Spitzer space telescope and other ground-based instruments.

On February 22, they announced they’d found at least four more planets orbiting TRAPPIST-1. According to Queloz, who was a part of the team that made the discovery, this is the largest such system we’ve found so far. And he is excited.

The astronomers claim in their published study that six of the seven planets are likely rocky – made up of rocks and metals just the way Mercury, Venus, Earth and Mars are (– and not gassy like Jupiter or Saturn). They are also fairly Earth-sized and were estimated to have densities in the vicinity of Earth’s.

“The fact that they almost all have a density consistent with rocky ‘Earth-like’ planets indicates that they probably formed after the initial gas disc that a young star formed out of, maybe in a similar fashion to the terrestrial planets in the Solar System,” said James Owen, an astronomer at Princeton University who has been studying the TRAPPIST-1 system. He was not involved in the study.

The team knew the least about the seventh, and outermost planet, because the data wasn’t strong enough to allow robust conclusions to be drawn about it. Additionally, three of the seven are in the habitable zone, at just that distance from TRAPPIST-1 that their surfaces might be holding pools of liquid water. But there is no way to confirm this yet.

What the team was able to confirm was the six planets’ masses, using a technique called transit-timing variation. This was only possible “because the planets are so close together, they interact quite a lot,” Queloz said. “They are in what we call a close resonance.”

When a planet moves against the face of its star, as seen by an observer, it causes a dip in the amount of starlight reaching the observer (because the planet casts a shadow). This action by the planet is called a transit. When they are in close resonance, and their gravity affects each other’s motion, how often one transits its star becomes fixed to how often another planet does in a way that depends on the planets’ masses. This influence is described by the transit-timing variation. And using the variations, “we have the mass of the system and that’s why we know the planets are all like Earth,” Queloz explained.

The paper was published in the journal Nature on February 22.

Owen surmised from the resonance that “the planetary system is relatively stable and the planets may not have moved much over their lifetime as this might break the architecture we see today.”

Then again, this could also be the main source of uncertainty in the paper’s findings, according to Susana Barros, an astronomer at the Institute of Astrophysics and Space Sciences, Portugal. “The TTV method, which is difficult in general, is extremely complex in the case of seven planets,” said Barros, who wasn’t involved in the study. “However, I think the authors have been very careful in the presentation of their results.”

All of this leaves one crucial aspect of the planets: their atmospheres. 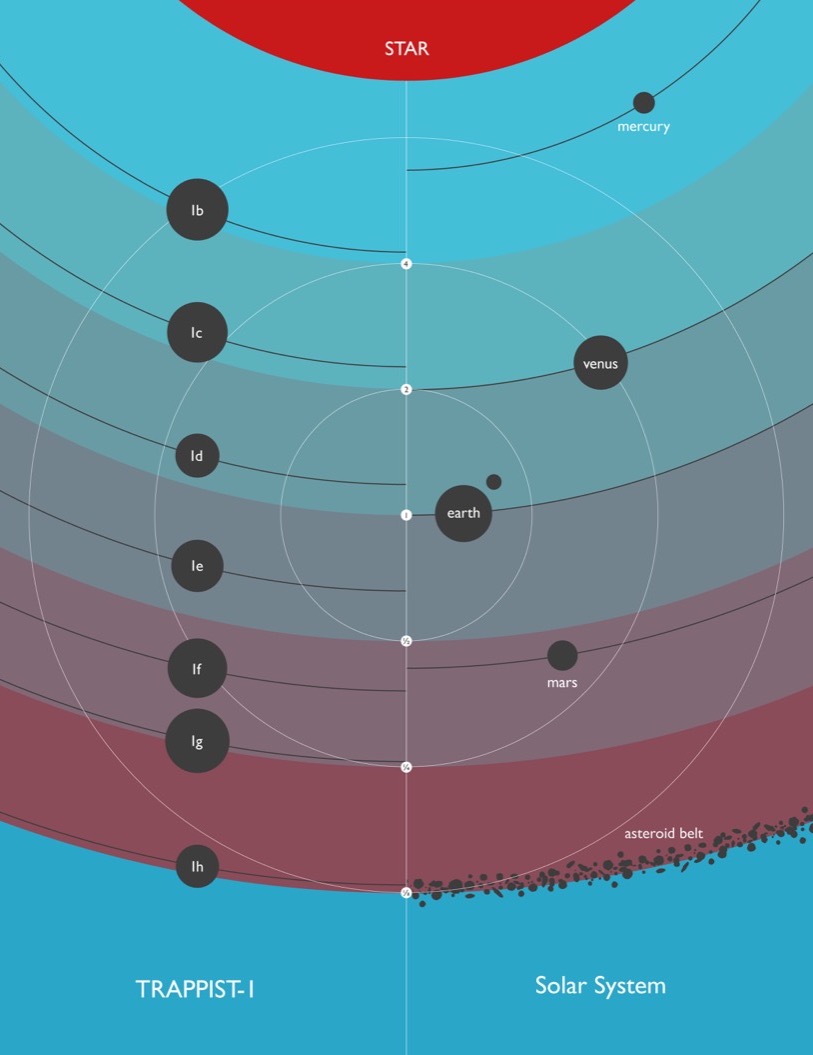 Comparing the TRAPPIST-1 system with the Solar System. Here, the vertical axis represents the amount of energy received from the star; for Earth, 1. Numbers indicate how much flux (2 = twice more, ½ = half) a certain distance corresponds to. Sizes of the planets are all relative to each other. Caption: Nature; credit: IoA/Amanda Smith

Queloz’s earliest claim to fame was his discovery of 51 Pegasi b, the first planet found orbiting a star other than our Sun, along with his mentor Michael Mayor in October 1995. It turned out to be an anomaly. It was about half as heavy as Jupiter but orbited its star at a distance shorter than the one between Mercury and the Sun. Nonetheless, it was still massive enough to have, and hold on to, an atmosphere. And only last month, American and Dutch astronomers found that this atmosphere contained a relatively large amount of water.

The big gap between finding the planet and the water in its atmosphere was due to 51 Pegasi itself. Being a Sun-like star, it was too bright, forcing astronomers to rely on sophisticated techniques that wouldn’t let the star’s prodigious energy output overwhelm the signs of a smaller planet.

With TRAPPIST-1, however, this isn’t a problem. Because it is smaller and less brighter than our Sun, planets have a stronger contrast against it. Signals originating from the planets can be easily distinguished from those from the star. And for Queloz, this is really important. “If there is an atmosphere on any of the planets and if there is water in the atmosphere, we will just see it.”

But “even if they could have water doesn’t mean they can actually hold onto it,” Owen cautioned. In a calculation he performed with his peers in 2016, it was found that when rocky planets formed beyond the habitable zone of an ultra-cool dwarf and then moved inwards, their atmospheres might be ripped off by the star’s ultraviolet radiation even as the planets also experience a runaway greenhouse effect – leaving them barren like Venus. “It’s just a question of them having enough water to start with to survive this early inhospitable period and allowing them to become habitable later in their lives,” he said.

Both Queloz’s excitement and Owen’s mindfulness will have their answer with the launch of the James Webb Space Telescope, which NASA has planned for 2018. The telescope will boast of a mirror (to collect light from different parts of the universe into its instruments) four-times as wide as Hubble space telescope’s. And with the experience of TRAPPIST-1, “you can now move on from talking about the possibility of life on other planets to measuring the data on the planets,” said Queloz. “This is a major change to me.”

He is planning to set up a facility called SPECULOOS along with Michel Gillon of the Institute of Astrophysics and Geophysics, Belgium, dedicated to exploring the neighbourhoods of other ultra-cool dwarfs. It stands for Search for Habitable Planets Eclipsing Ultra-cool Stars. “We wanted to do this because these are the only stars with which we can hope to see the planet’s atmosphere if there is a transit.” But before they built the facility, they figured it would be good to practice using smaller telescopes to get ‘used’ to the quirks of such stars. They started in 2013 with a plan to target a handful of ultra-cool dwarfs.

That’s how they found TRAPPIST-1 and its bounty of six planets. Or seven, since Barros thinks what data there is for the seventh is distinct enough and that the chance of a false positive is “very very low”. In fact, Queloz isn’t prepared to rule out even more planets farther out from the star, remaining undetected for now because we haven’t seen them transit yet. Barros also thinks it’s possible that some outer planets might not even be on the same plane as the others, rendering them invisible to the transit method of detection.

Nonetheless, astronomers expect more stars like TRAPPIST-1 to have orbiting planets. Ultra-cool dwarfs like it are the dominant ‘species’ of star in the Milky Way galaxy, leaving the door open for them to find, as Queloz put it, “zillions of planets”.