Scientists from labs in Mumbai, Gandhinagar and Lisbon have found a cheaper-than-usual way to understand how magnetic fields in solar winds and solar flares evolve. 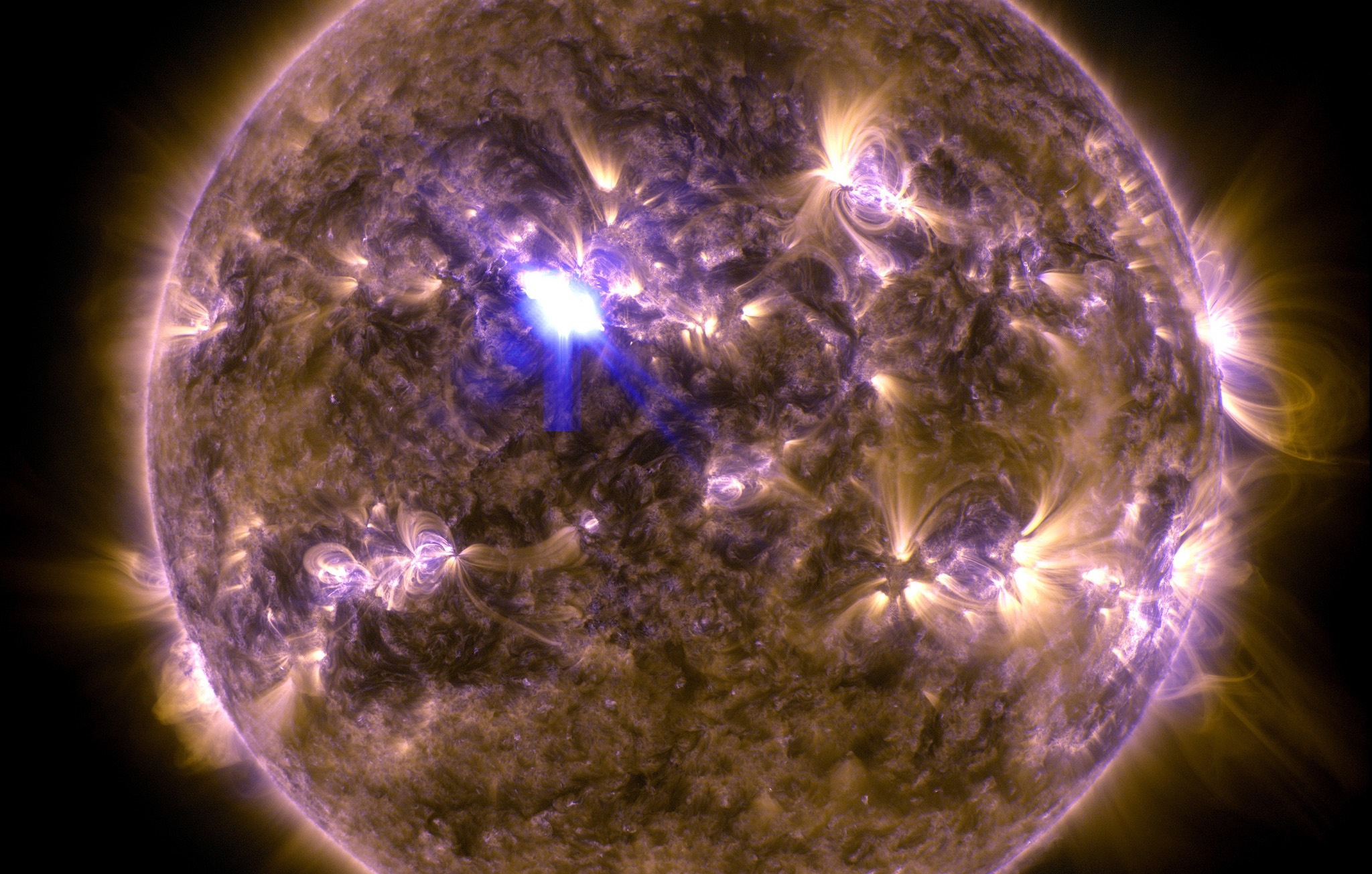 The Sun lets loose a solar flare of magnitude M6.5 on April 11, 2013. Scientists have implicated intense magnetic fields in the production of such flares. Credit: gsfc/Flickr, CC BY 2.0

Our planet’s magnetic field, when measured on the surface, is about a hundred-times weaker than the field produced by a small refrigerator magnet. Yet it is sufficient to turn a compass needle around and point travellers on their way.

Imagine then what it must be like on a sunspot, where magnetic fields can be 5,000-times stronger than Earth’s. These fields break up and reconnect violently, kicking up tonnes of superhot charged materials on the star’s surface and flinging them, and radiation, millions of kilometres into space. They are created by protons and electrons streaming across the Sun’s surface and insides, so understanding how magnetic fields beat around and choreograph the flow of material around them could be useful for scientists to understand how stars are born, live and die.

The best way to make these studies would be to get within a few million kilometres of the Sun – which NASA’s Parker Solar Probe will try to do a year from now. But before that, scientists from India and Portugal have stumbled upon another window into understanding the Sun’s magnetic field, and they think they can do it from from 149 million km away.

They performed a tabletop experiment using a high-power laser and a volume of plasma to create a very short-lived magnetic field. Their observations of how this magnetic field evolved along with its surroundings, they say, bears a “striking resemblance” to data scientists have obtained of “the solar wind, solar flare loops, solar photosphere and Earth’s magnetosheath” using satellites. The solar wind is the continuous stream of charged particles being emitted by the Sun into the Solar System. The researchers’ study was published in the journal Nature Communications on June 30, 2017.

“For people studying stellar or solar winds far away from the stellar surface, these findings can make a difference,” said Piyali Chatterjee, at the Indian Institute of Astrophysics, Bengaluru. “The parameters that are used” in some models to understand small-scale processes, according to her, “can be tuned from experimental findings like this one.” Chatterjee was not involved in the study.

Gourab Chatterjee, a postdoctoral researcher at the Tata Institute of Fundamental Research (TIFR), Mumbai, at the time the experiment was conducted, and one of the team, said, “Our experiment is, to the best of our knowledge, the first demonstration of laboratory astrophysics with a compact, tabletop, commercially-more-viable laser system, opening a window to investigating the ubiquitous phenomenon of magnetic turbulence that pervades the universe.” He is now at the Max Planck Institute, Hamburg.

The team achieved this using a simple setup. They used the pump-probe technique, where one laser first initiates a physical or chemical process in the system under study and another laser, fired after a very short duration, ‘probes’ how the system evolves in response. In their experiment, the ‘pump’ laser had a power output of 20 terawatt – equivalent to the collective output of over 200 billion T12 tubelights. Using a carefully adjusted parabolic mirror, the researchers focused this laser onto a patch roughly twice the size of a red blood cell on a specially coated slab of glass. The laser fired for 30 quadrillionths of a second and heated the solid into its plasma phase. Shortly after, the ‘probe’ pulse was fired such that it could resolve what was happening in the plasma down to a length of around three micrometers.

G. Ravindra Kumar, a senior professor at TIFR and one of the team, explained, “The plasma has negatively charged electrons and positively charged ions and the electrons are driven by the ultrashort laser pulse to form currents.” These currents give rise to magnetic fields that subsequently become turbulent. But why would they become turbulent? The answer might lie with which other particles start carrying the current – a finding that was made possible by using the right probe pulse.

“The ions are thousands of times heavier than the electrons so at the initial stages of the plasma evolution the ions are just static and do not participate in the plasma dynamics,” Kumar continued. “However, at longer times, the ions start moving and the energy given by the laser pulse to the electrons starts getting shared by the ions, too, and their motion now starts affecting the magnetic field.”

In technical parlance, using the flow of just electrons to explain some magnetic phenomena is called electron magnetohydrodynamics (EMHD). And EMHD could indeed explain the behaviour of magnetic fields in experiments that studied them for a few picoseconds (one picosecond is a trillionth of a second). But in the experiment performed by the Indian and Portuguese scientists – using thousands of laser shots and recording data over two years – they found that around 70-80 picoseconds later, a distinct kink showed up in their data that indicated some kind of transition was taking place.

That transition, when the magnetic field starts to become turbulent, is thanks to the heavy ions going “Why must electrons have all the fun?” And that transition, according to their Nature Communications paper, is also what has been observed in numerous satellite observations of turbulent processes in which astrophysicists think magnetic fields could be implicated.

The findings are no doubt bound to be useful. Now, “we can design, tweak or manipulate conditions in the lab – while it is unthinkable to tweak an astro system! – to look for responses in a controlled manner and perhaps with a newer combination of parameters or in a newer regime,” Kumar said. “All this data can be used to test physical models for the behaviour of matter under extreme conditions like those inside a star.”

Piyali Chatterjee provided more context: “In the lab the time scales are picoseconds and the magnetic field [strength] is around 100 tesla – whereas in the solar wind measured inside Earth’s magnetosphere, the magnetic field is [a billion-times weaker] and the time-scales are in the order of seconds. Also in the solar wind near Earth, [the transition that the researchers have been able to recreate] is difficult to observe due to technological limitations.”

“We hope the Parker probe can throw more light on such regime transitions.”

Even then, as with all things in science these days, there would be a long way to go. Akin to Gourab’s claim that their experiment was the first to demonstrate “laboratory astrophysics” of one kind, a paper published in the journal Physical Review Letters on July 13 claims another first. Its authors write in it that the new “experimental platform they have developed is “highly flexible”, that “its development enables new collaborative investigations on the relationship between collisionless shocks and other highly-driven, astrophysically relevant systems such as those involving magnetic reconnection…”.

The experiments only sound similar. According to Gourab, they are exploring different regimes, which he says is discernible from their choice of lasers. The other experiment used the Omega EP laser facility at the University of Rochester, New York, which “deposits more energy over longer time-scales” compared to tabletop lasers, which “can achieve very high intensities over ultrashort pulse widths, and are often used for particle acceleration schemes.” Either way, he speculated, laser-based investigations into astrophysical phenomena will be a staple of the future.

Apart from TIFR, scientists from the Institute for Plasma Research, Gandhinagar, and the Instituto Superior Tecnico, at the University of Lisbon, were also involved in the study.