If There's a Fire Down Below, Do You See a Firehawk up Above?

Humans might not be the only species on the planet manipulating fires to get what they want. 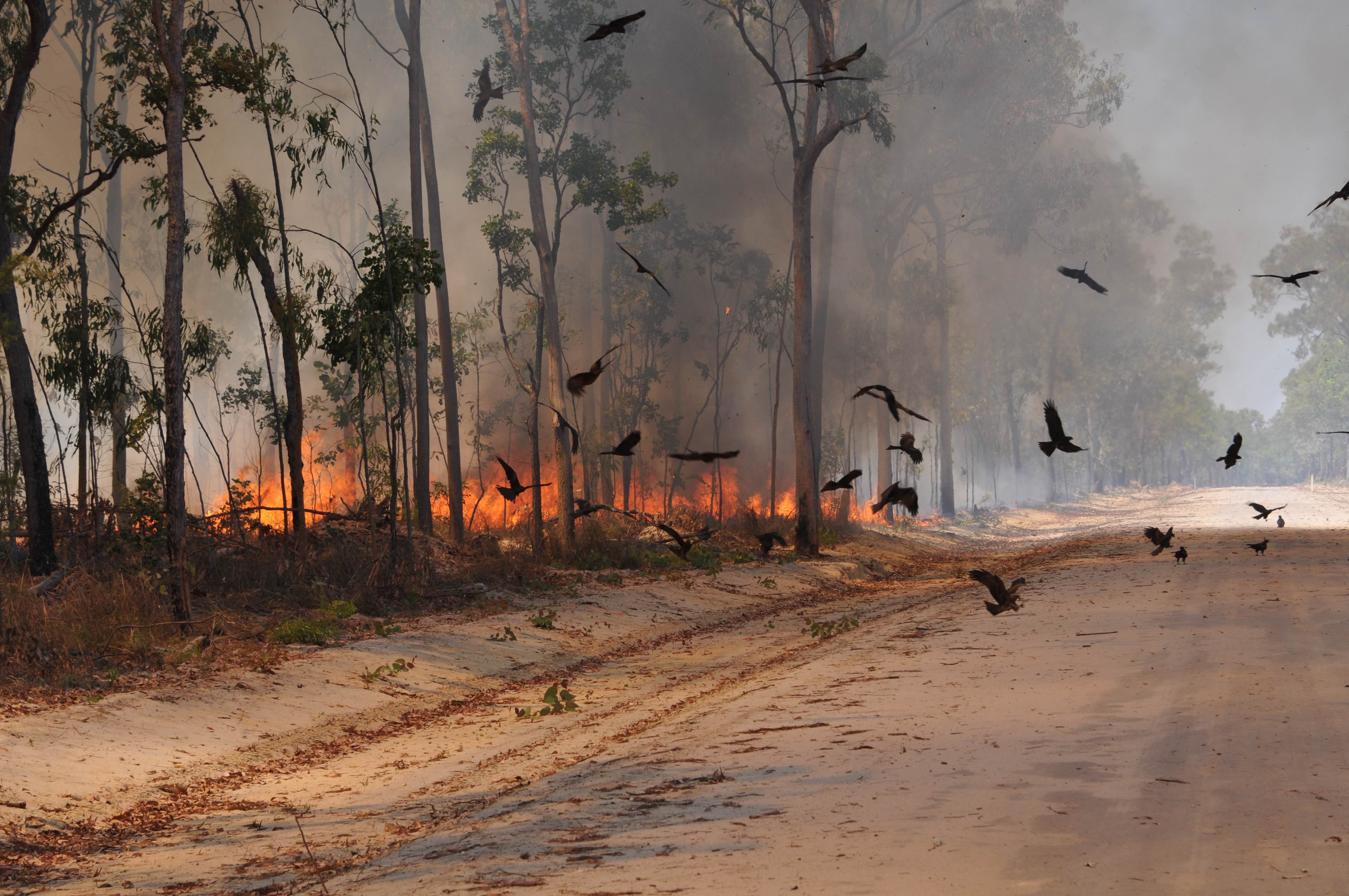 Some say the one thing that distinguishes humans from animals is the use of fire. The title of evolutionary biologist Richard Wrangham’s book Catching Fire: How Cooking Made Us Human captures the kernel of that idea – wielding fire made us who we are. Running big brains requires turbo power, and raw meat doesn’t provide enough energy to run these supercomputers. Cooking the plentiful starchy tubers released brain development from calorific restraints. Such manipulation of fire is a skill no other animal has shown.

Not until now. Although they may not roast their meals, a few Australian raptors seem to set the undergrowth alight to flush out their prey.

The Aboriginal peoples of Australia set fire to the landscape at the end of long dry seasons, when wild food resources were hard to find. Burnt plants and grasses put out new growth attracting herbivores like kangaroos. When animals gather in numbers, hunting them becomes easier. Burning also induced edible plants to grow. Aboriginal communities use fire so extensively that ecologists call it ‘fire-stick farming’.

Every year, 30 to 50% of northern Australia burns. Dry savannahs, especially with their piles of inflammable material, are tinderboxes that go up in flames annually.

Wildfires attract some birds like black kites. Scores of insects, reptiles and rodents escaping from the conflagration are easy pickings. Once the birds snatch a morsel, they perch somewhere safe and tuck into it. Sometimes, they even pick up barbecued prey. Being airborne, they don’t have to worry about getting singed as they move with the fire front.

But can these raptors make the leap from exploiting an already raging fire to creating one?

In his autobiographical book (retold by Douglas Lockwood) I, the Aboriginal, published in 1962, Phillip Waipuldanya Roberts describes seeing a bird pick up and carry a flaming stick with its talons from a fire front, only to drop it on unburnt dry grass half a mile away. Roberts went on to suggest his people may have learned to flush out prey with fire from the birds. This behaviour intrigued Robert Gosford, an Australian ornithologist interested in traditional knowledge. He collated published records and put out the word for eyewitness accounts of similar bird behaviour.

Such stories are familiar to the Aboriginal communities living in Western Australia, Northern Territory, and Queensland that they enact as part of their religious ceremonies. The emblem of an Aboriginal land management organisation is one such bird.

The researchers narrowed down a dozen ranchers, firefighters and two academics who claimed to have seen birds igniting fires. They then followed up by asking open-ended questions. In all, they list 20 instances from a 2,400-kilometre stretch of northern Australia, where raptors carried a smouldering stick and dropped it elsewhere. The birds, which Aboriginal peoples call firehawks, are of three species: the black kite (Milvus migrans), the whistling kite (Haliastur sphenurus) and the brown falcon (Falco berigora).

Anthropologist Kim Akerman described how a black kite created a new fire about 15 to 20 feet away from a blaze in Kimberley, Western Australia. This 1977 event wasn’t a one-off; he saw the same action repeat itself in 1980. Anthropological linguist Denise Angelo not only heard these tales from Aboriginal peoples but also witnessed the behaviour on several occasions in the Northern Territory.

Dick Eussen, a firefighter and one of the authors, saw a kite start a fire across a Queensland road by dropping a smoking stick on inflammable grass. He says he put out seven fires ignited by raptors in Northern Territory.

One firefighter said that a few birds managed to set a small valley ablaze. Another reported that raptors worked together to kindle a fire across a river, which got out of hand and partly burnt down a cattle station. Workers of at least one cattle station kill raptors with shotguns to protect livestock and property.

When they first heard these stories, many non-Aboriginals said they had dismissed them but came to believe them when they saw the behaviour for themselves. Some cursed the birds’ ability to rekindle fires that had been stamped out, complicating their task.

“It’s a wonderful story,” says Suhel Quader, an ornithologist at the Nature Conservation Foundation, Mysuru. “Something one hopes is true, since it’s so fabulous. The eyewitness accounts are compelling, but there are surprisingly few, given the frequency of fires in the region, plus the number of people out there trying to manage the fires.”

One reason why this behaviour isn’t well-recorded is perhaps because northern Australia is sparsely populated. Firefighters work long hours putting out a blaze and don’t have time to watch birds. 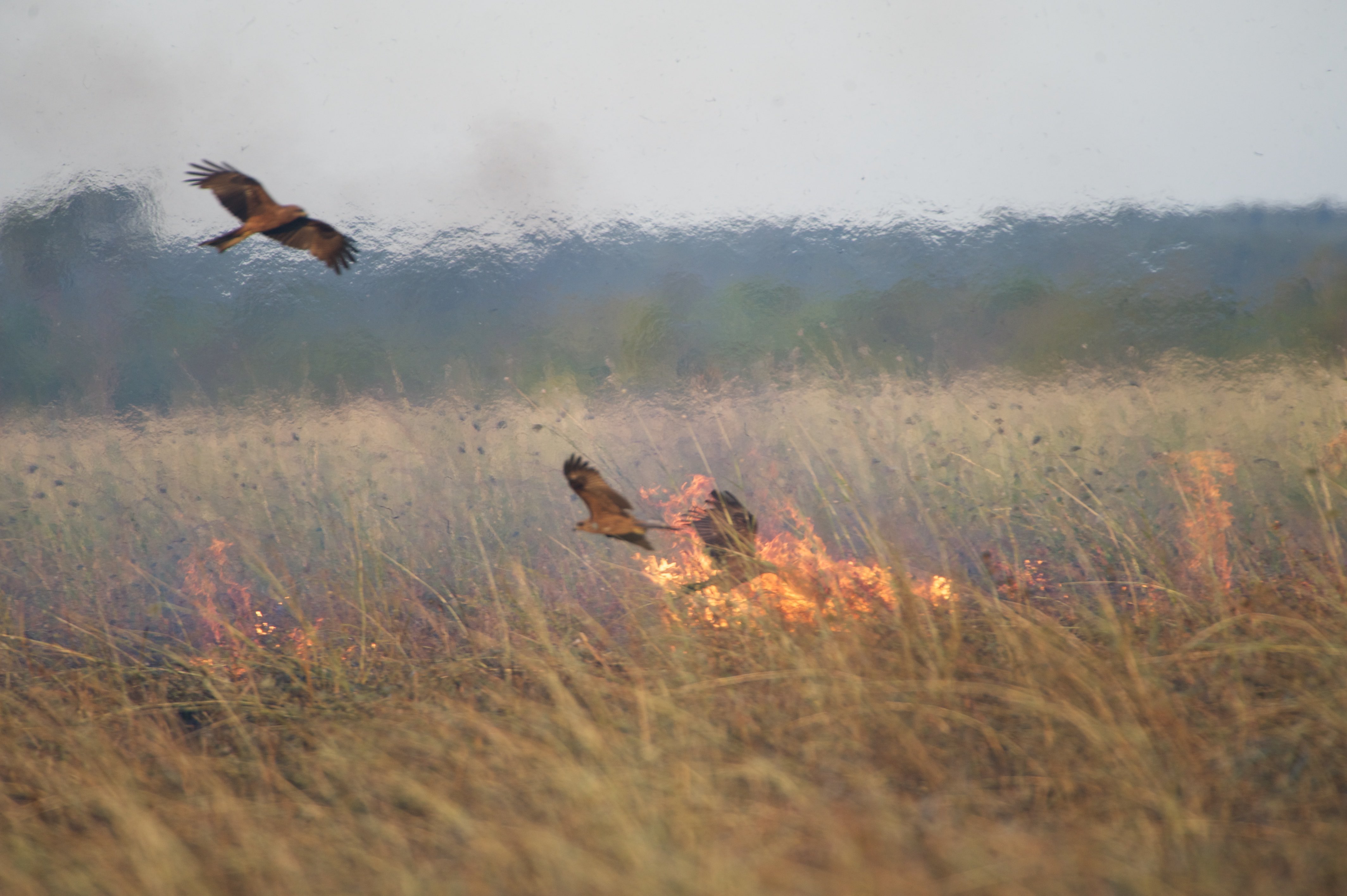 Black kites on the lookout for prey at a fire. Credit: Bob Gosford

However, raptors flock to fires throughout the world. Large numbers of black kites wheel around the wildfires of Asia and Africa, yet there are no tales of this fascinating behaviour. Nor do other raptors like buzzards that hunt at fire fronts seem to have figured out how to start a fire. Or people haven’t noticed them, or nobody asked communities about it.

Perhaps the northern Australian population alone has the cultural tradition of using fire-sticks. This is not unusual since different populations of chimpanzees use specific techniques of fishing ants. Some have figured out how to sponge water using moss.

Even in northern Australia, the behaviour isn’t consistent. Eussen reports that of 25 kites hawking for prey, only two attempted to pick up sticks. One inept bird repeatedly dropped the stick before it could carry it farther.

Another firefighter and coauthor, Nathan Fergusson, observed such events at least a dozen times in his career. He says that out of hundreds of kites, only a few picked up flaming sticks, and he now anticipates this avian behaviour in managing fires.

“At present, we have scattered anecdotal reports of similar behaviour from a number of locations [around the world] and are keen to pursue and expand upon those reports and to hear of new reports,” Gosford told The Wire.

While the currency of ecological studies is data, sociological studies build upon narratives such as these. No one has so far recorded this incendiary avian behaviour on video. Even if the researchers get photographic evidence of raptors starting fires, proving intent is another issue.

“The question is, are the firehawks ‘selectively’ picking up smouldering/burning sticks (i.e., over other items on the ground) and then ‘selectively’ dropping them on unburnt and combustible vegetation away from the fire (i.e., over other places they could have dropped them),” says Quader. “Personally, I think it’s quite likely the birds are intentionally spreading fire – but in terms of evidential rigour, we’re not quite there yet. This requires many more observations, possibly even a clever (although difficult) experiment.”

The authors say their research raises questions about the history and evolution of fire in the Australian savannahs.

Gosford and his colleagues also plan to pursue another line of investigation. They’ve recorded, but not published, accounts narrated by Aboriginal people of raptors taking sticks from domestic cooking fires while camping. “We will also seek to gather further accounts and observations about the connections between Australian Aboriginal indigenous ecological knowledge and traditional cultural practices,” says Gosford.

If you have noticed birds spreading fire, please get in touch with Bob Gosford at bgosford [at] gmail.com or @bgosford.

The study was published in the December 2017 issue of the Journal of Ethnobiology.