It is little surprise that, walking through the gates of curiosity, this year's chemistry laureates came upon treasures so wondrous. 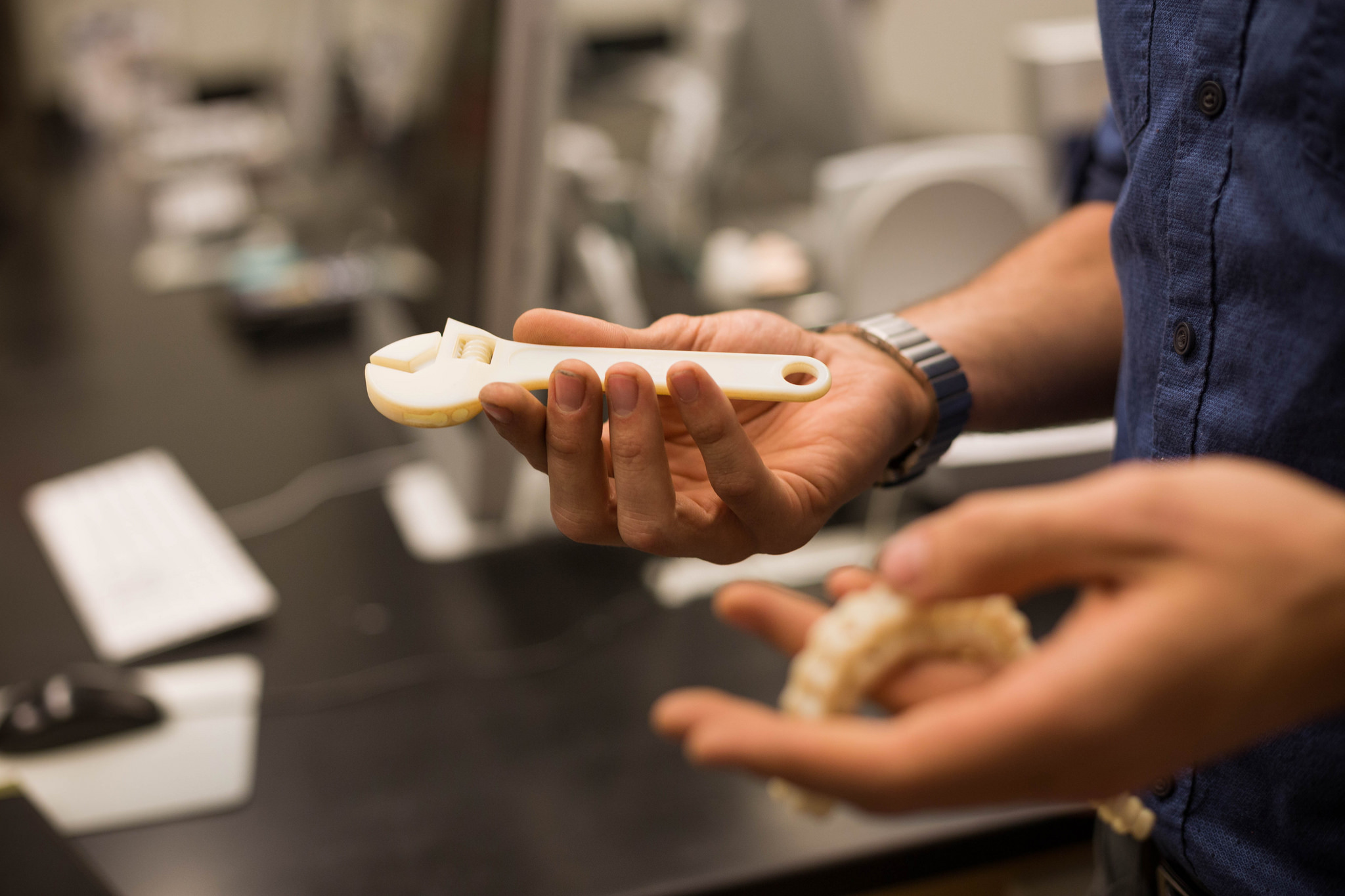 … it is interesting that it would be, in principle, possible (I think) for a physicist to synthesize any chemical substance that the chemist writes down. Give the orders and the physicist synthesizes it. How? Put the atoms down where the chemist says, and so you make the substance. The problems of chemistry and biology can be greatly helped if our ability to see what we are doing, and to do things on an atomic level, is ultimately developed— a development which I think cannot be avoided.

The theoretical physicist Richard Feynman delivered these words at a lecture, titled ‘There’s plenty of room at the bottom‘, in Pasadena in December 1959. Feynman’s exhortation to his audience was to explore the world of the very small and to populate it with machines just the way we have stamped the world of the very big with proofs of human industry. He wanted physicists, chemists and biologists to build tiny computers, libraries and cars using individual atoms as cogs. He offered to pay $1,000 to the first person to build an electric motor so small that more than 60 of them had to be able to fit on a tablespoon. Most of all, he wanted everyone to have some fun.

The 2016 Nobel Prize for chemistry was awarded to three men who, by Feynman’s standards, had oodles of fun. Jean-Pierre Sauvage, J. Fraser Stoddart and Bernard L. Feringa shared the prize for building mechanical devices like motors and lifts using molecules for parts. According to the Nobel Committee’s statement, the trio’s work has inspired their peers to dream up applications in designing new materials, sensors and “energy storage” systems. When Feynman first suggested that scientists build molecular machines, he likely had none of these applications in mind. Were he alive today, he probably wouldn’t be surprised either that, walking through the gates of curiosity, Sauvage, Stoddart and Feringa came upon treasures so wondrous.

So how exactly did they? Since the early 1930s, all of chemistry had been about the exchange of electrons between atoms to form molecules. A few decades on, however, this paradigm began to be offset by some scientists imagining what it would be like for large molecules to mimic the parts of a machine, and for those machines to perform the same tasks their more massive counterparts did but at the scale of a few nanometers. But before this could happen, scientists needed their building blocks: the large molecules, the molecules built using chemistry that went beyond the synthesis of the molecules themselves. This was supramolecular chemistry. And it wasn’t just about building individual molecules and then clipping them together. Scientists had to think about synthesising molecules that, at the moment of formation, were assembled in some particular ways. The molecules also had to be able to absorb energy and react in mechanically advantageous ways.

In an autobiographical essay written in 2005, Stoddart outlines the way his brand of chemistry research evolved – had to evolve – for scientists to get to molecular machines. It was a journey assisted by the occasional incentive of a practical application, a lot of encouragement from his colleagues for pursuing what others thought were “crazy research projects” and, in the end, persevering solely for the sake of accomplishing something that was once thought impossible. Stoddart writes how one phase of his work began in 1981 at Sheffield University when he wanted to improve the performance of a herbicide and ended with his entry into molecular electronics – on the way synthesising machines called catenanes and rotaxanes. A catenane consists of two ring-shaped molecules interlocked like the units of a chain. A rotaxane is a molecular machine resembling a car’s wheel-and-axle configuration.

A short time later, Jean-Pierre Sauvage and his lab at the Louis Pasteur University in Strasbourg, France, were able to show that there existed a simpler way of synthesising catenanes and rotaxanes en masse. As a result, Stoddart’s lab was able to produce the supramolecules they needed in large quantities as well as build on Sauvage’s method to improve them. This led to a breakthrough in 1991, when Stoddart’s team published a more efficient way to synthesise rotaxanes. And only a year later, the group was involved in the design and construction of bistable mechanical switches – molecules that could exist in two states like ‘on’ or ‘off’ depending on some external conditions.

But in order to get as far, the man had to reinvent himself and seek out international collaborations in the face of much resistance from his colleagues. He wrote, “Any successes, however modest, only seemed to engender envy and resentment amongst some of my senior and influential colleagues who would then go to any lengths to undermine my academic activities.” So in the 1980s, Stoddart started to write to the national press about “the wantonness and waste I witnessed all around me. I questioned the extremely high level of bureaucratic state control that accompanied the hierarchically manipulated allocation of financial and other resources to research in science and engineering in Britain” – words readily applicable to Indian higher education today. Eventually, he was able to persuade some university administrators to send his grant proposals to be reviewed in the United States. Stoddart’s lab then began actively collaborating with the Americans from around 1984.

However, his tribulations weren’t yet at an end. In the 1990s, Stoddart faced yet more resistance from the wider community of supramolecular chemists who refused to believe that nanoscale machines of the kind Stoddart had helped build could exist. This attitude is reminiscent of the one faced by the Israeli scientist Dan Shechtman, who won the Nobel Prize for chemistry in 2011. Crystals are solids in which the atoms are allowed to arrange themselves in a fixed set of ways. Linus Pauling, perhaps the greatest chemist of the 20th century, had discovered what these ways could and couldn’t be; according to him – and the community of researchers that hero-worshipped him – crystals that didn’t follow his rules couldn’t exist. However, Shechtman had discovered in 1982 that just such an unruly crystal existed. When he attempted to publicise his work, he was faced with widespread ridicule, including from Pauling and his followers. His career was almost wrecked until he was able to persuade some of his peers to help him write his paper, perform additional tests for proof and finally have his paper published in a prestigious journal.

Though Stoddart doesn’t say he was ridiculed, he does say that “it was in response to a ridiculously high level of skepticism and criticism” that he fell back on the use of less exotic techniques to establish what he had accomplished was legitimate. After that, he was able to set up a lab at the University of California, Los Angeles, where he continued to work on building molecular machines into the late 1990s.

It was around this time that Bernard Feringa entered the picture. Using compounds called overcrowded alkenes, Feringa’s group was able to create in 1999 a rotor that could spin only in one direction – as it should – when heat and UV light were applied to it in controlled conditions. And by attaching four of these molecular rotors to two axles, and joining up the axles using a string of atoms, Feringa created the world’s first four-wheel-drive nanocar. It was just the car that Feynman had called to be built almost 51 years ago.

On October 4, the Nobel Prize for physics was awarded to three scientists who uncovered the role topology played in determining how some quirky forms of matter behaved at very low temperatures. On October 5, the Nobel Prize for chemistry was awarded to three scientists who used their knowledge of topology to build the world’s smallest machines. Coincidence or not, both prizes reflect the increasing attention we’re paying to how topology, the study of the geometric properties of objects that don’t change with size or shape, could define humankind’s engineering of the future. And if in this future we might be able to race self-driving cars inspired by Meccano sets from the 1980s and yet are a billion times smaller than we are, then we have much to look forward to.