In a flawed critique against the March for Science in India, the philosopher erects and razes strawmen, presuming he has made his case.

Rahul Siddharthan is a faculty member of the Institute of Mathematical Sciences, Chennai. The views expressed here are personal.

Following the nationwide March for Science in India on August 9, 2017, The Hindu (Chennai edition, of August 10) covered the event via three pieces: two small news items in the inner pages – one paragraph about the march in Chennai, and one about an institute in Delhi advising members not to participate – and a large critique on its op-ed page by Sundar Sarukkai, a philosopher. This piece is provoked by that critique, but also takes the opportunity to go into some general issues regarding the practice of science.

Sarukkai’s criticisms (discussed below) focus among other things on the ‘scientific method’.  So it is worth discussing the meaning of this phrase, as well as its Nehruvian cousin, ‘scientific temper’.

There is indeed no universal definition of the scientific method. It could be argued that there are as many methods as there are scientists. Merriam-Webster’s online dictionary offers this: “Principles and procedures for the systematic pursuit of knowledge involving the recognition and formulation of a problem, the collection of data through observation and experiment, and the formulation and testing of hypotheses.”

But this is a method for presenting scientific research, not necessarily for doing science, where hypothesis-framing and solutions to problems can come in flashes of inspiration and good ideas that later prove to be correct, and which can be justified after the fact. However, the definition does bring out key aspects: the systematic well-documented collection of data through observation and, where possible, reproducible experiment; and the formulation and testing of falsifiable hypotheses or theories. The italicised words are key: in their absence, the method is not reliable.

This is not restricted to the natural sciences: it is applicable to any field where there is even a little room for objectivity – such as history, anthropology, and certain areas of musicology and linguistics, where previous ideas are changed by newly discovered evidence.

There have been controversies across the sciences (most recently, in certain areas of physics) on whether all these points are really required – but I will not dwell on them here. Suffice to say that were these points not generally accepted, the recent violations would not be controversies.

Scientific temper, on the other hand, was a phrase apparently used for the first time by Nehru. After recognising the limitations of reason and quoting Blaise Pascal to the effect that the ultimate end for reason is to recognise that there is an infinity of things that surpass reason, he continues (The Discovery of India, 1946):

Realizing these limitations of reason and scientific method, we have still to hold on to them with all our strength, for without that firm basis and background we can have no grip on any kind of truth or reality. It is better to understand a part of truth and apply it to our lives, than to understand nothing at all and flounder helplessly in a vain attempt to pierce the mystery of existence. The applications of science are inevitable and unavoidable for all countries and peoples to-day. But something more than its application is necessary. It is the scientific approach, the adventurous and yet critical temper of science, the search for truth and new knowledge, the refusal to accept anything without testing and trial, the capacity to change previous conclusions in the face of new evidence, the reliance on observed fact and not on pre-conceived theory, the hard discipline of the mind — all this is necessary, not merely for the application of science but for life itself and the solution of its many problems. Too many scientists to-day, who swear by science, forget all about it outside their particular spheres. The scientific approach and temper are, or should be, a way of life, a process of thinking, a method of acting and associating with our fellowmen…

With that background – on to the March for Science (disclosure: I participated in the Chennai edition), its stated goals and Sarukkai’s criticisms. The event’s organisers had four principal demands:

Sarukkai’s claim seems to be that those who argue for supporting science, in India at least, are “fundamentalist” and (perhaps worse) “unscientific” in their views. To this end, he considers the above demands and – in some cases – voices legitimate disagreements (but without any supporting evidence for his position). In other cases, Sarukkai caricatures the statements to the point of absurdity and thus presumes that he has made his case.

At the outset, scientists are a large and diverse community and it is unlikely that every scientist (or supporter of science) who showed up at the marches would agree in detail with every statement made in the manifesto. I, for example, fully support increasing spending on education and research but would not be so specific as to demand allocation of 10% and 3% of GDP, respectively. However, few, if any, scientists of my acquaintance disagree with the demands to the extent of rejecting the very relevance of the march.

Sarukkai’s first salvo is the claim that the above numbers, as fractions of the GDP, are “unscientific”. But nobody claimed that these numbers were based on a scientific study. Is he challenging the specific number of 10% or the idea that expenditure on education should be increased? Either way, he does not justify his objection. And the general idea that primary education in India is woefully underfunded (and has been since Independence) is surely unobjectionable. 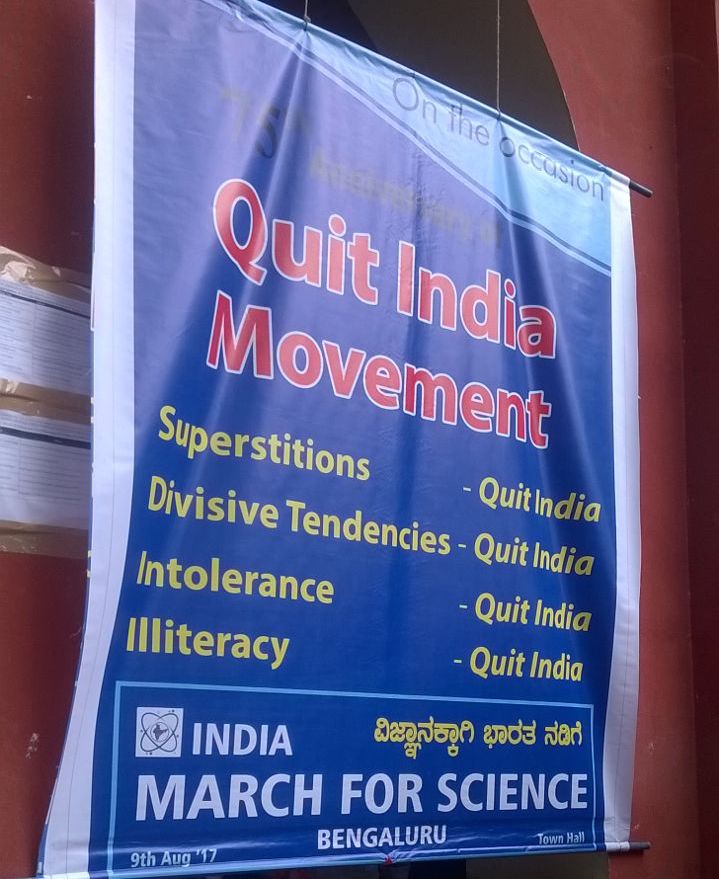 A poster from the ‘March for Science’ in Bengaluru. Credit: Subham Rath

The philosopher then descends into farce: he interprets the demand that “the education system impart only ideas that are supported by scientific evidence” as applying to art, music, literature and so on, and suggests that India’s “fundamentalist” scientists want to stop teaching these subjects in schools. Worse, he includes history in this list, forgetting that the scientific, evidence-based method is very much applicable to history at every level. All credible historians will agree that ongoing debates, such as the origins of the Indus Valley civilisation and the Vedic culture, should be resolved via verifiable facts and not polemics or nationalist sentiments.

Sarukkai then takes issue with the idea that inculcating “scientific temper” would rid society of superstition and social ills. I share his skepticism somewhat – as indeed does Nehru in the quote above. But Sarukkai’s reason is astonishing. To quote: “The difficulty of giving one coherent definition of science or of scientific method, or to have a theory of causality that can help explain how scientific temper can get rid of superstition, caste, religion or even mob lynching, should hopefully make them more critical of their own beliefs about science.” To the extent that I understand that sentence, he seems to be making two different points:

Having erected these numerous strawmen, Sarukkai proceeds to demolish them with the sweeping statement: “A march based on such an ‘unscientific’ understanding of science cannot be a march for science.”

A wave of pseudo-scientific beliefs

Rather than methodically take apart all of these strawmen, I would like to focus on the points about the scientific method, scientific temper and superstitious beliefs.

First, there is certainly agreement on the following aspects of the scientific method:

The last is the most important. There is no gospel truth or “appeal to authority” in science.  Then again there are also degrees of falsity. Albert Einstein’s theory of gravity contradicted Isaac Newton’s in certain minute details, and careful observations supported Einstein. This does not mean that Newton’s theory was just as wrong as, say, Aristotle’s (who believed that heavier objects fall faster than lighter objects). In fact, in many situations Newton’s theory remains much more useful than Einstein’s: it is much simpler to calculate with and the differences from Einstein’s theory are undetectable in most everyday circumstances. It is important for a theory to make concrete predictions that can be confirmed or refuted by experiment. If refuted, it is time for a better theory. But it does not mean all previous theories are equally bad!

Falsifiability, too, is not always a question of certainty. Given two competing theories, scientists tend to favour the theory that fits the data better, with fewer assumptions and complications. Most scientists favour the Big Bang theory of the origin of the universe – but a small number continue to favour the alternative steady state theory. There is nothing impossible about the theory of certain fundamentalist Christians that the world was created 6,000 years ago, complete with fossil records, astronomical evidence and so on. All of it could have been created in an instant by a godlike entity to make it look much older. But if the data can be explained without assuming a god who is deliberately misleading humans in this way, scientists would prefer such an explanation.

Second, about scientific temper and superstitions; it certainly can’t be scientifically proved that increasing the one will lower the other. However, one universally-accepted feature of the imperfectly defined “scientific method” is that it is evidence-based. Evidence may be found outside controlled laboratories and particularly in history. While superstition has always existed around the world, it is also clear both in the West and in India that an increased penetration of scientific awareness is accompanied by decreases in the most harmful superstitious practices. In the western world, some may fear the number 13 but diseases are no longer cured by bloodletting and witches are no longer burned. In India, many of the most egregious social practices were wiped out thanks to reformers like Ram Mohan Roy and legislation by the British, and there has been no increased appetite for social crimes such as sati in independent India.

One hopes and wishes that the prevalence of superstitious beliefs has been following a uniformly downward trend. Sarukkai dismisses the idea that there is a “rising wave of unscientific beliefs” as “rhetorical” and “fear-mongering”. But just a couple of days earlier, in the context of the lunar eclipse of August 7, a leading financial newspaper ran the headline ‘Lunar Eclipse 2017: Why eating food during a lunar eclipse can have a harmful effect on your body’. Among other things, it played up a message advising readers to “take a bath in cold water with one’s clothes on immediately after the lunar eclipse”. And in expert support of these claims, the newspaper quoted a Hindu religious organisation and a godman.

Such beliefs may have been widespread in society earlier but I cannot recall a previous instance of a newspaper supplying this sort of advice to its readers. Nor can I recall previous examples of mythology being touted as ancient science at the Indian Science Congress, as happened in 2015. Whether or not there is a “rising wave of unscientific beliefs” in society at large, it seems undeniable that there is an increased propagation of such beliefs in the media and by the government in India today.

Or is it possible that Sarukkai and other apologists for recent obscurantist excesses are relativists (the sociological kind) who believe that there is no difference between asking, with inadequate justification, for 10% of GDP to be spent on education – and asking readers to bathe with clothes on in cold water after an eclipse?