For Space, and ISRO, Frugality Is a Tightrope Walk Not Worth Celebrating

Saying “Chandrayaan 2 is cheaper than Interstellar” is pernicious because frugal engineering is not an end unto itself, especially when we seldom celebrate any other aspects of these missions.

A strap-on booster for the PSLV C11 mission, which launched Chandrayaan 1 in 2008, being unloaded at the Vehicle Assembly Building. Credit: ISRO 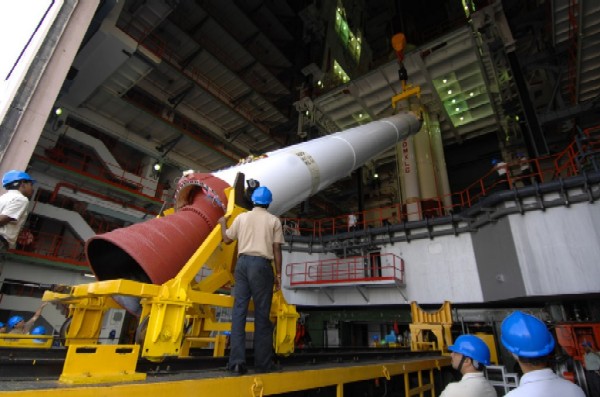 A strap-on booster for the PSLV C11 mission, which launched Chandrayaan 1 in 2008, being unloaded at the Vehicle Assembly Building. Credit: ISRO

‘Tis the season of comparing space missions to Hollywood films again! In the last week, a Times of India article described the cost of India’s second mission to the Moon, Chandrayaan 2, expected to be launched in April this year, as being “cheaper than Hollywood film Interstellar“. A bevy of other publications have, enamoured by this spin, carried it forward in headlines of their own. The same thing happened with the Mars Orbiter Mission, launched in 2014, a technology-demonstrator that, according to many reports, cost less to execute than Hollywood’s Gravity.

In the mainstream Indian media, these comparisons are made only when reporting on the country’s space programme. They are both meaningless and, in their own way, pernicious: frugal engineering plays its part but it is not an end unto itself. If it were, the Indian Space Research Organisation (ISRO) would have no room to ask for its foreign clientele for more money, even if the latter could afford it, and set a self-defeating precedent that would undermine the Indian space programme.

Each comparison is like saying the angular momentum of a frog is lower than the speed of light. “But of course,” you’re going to say, “we’re comparing angular momentum to speed – they have different dimensions”. Similarly, the production cost of a film and mission costs also have different dimensions beyond the ‘$’ prefix. That is because one can’t just pick up two dollar figures, decide which one’s lower and feel good about that without any social and economic context.

For example, what explains the choice of films to compare mission costs to? Is it because Gravity and Interstellar were both set in space? Is it because both films are fairly famous? Is it also because both films were released recently? Or is it because they offered convenient numbers? It is probably the last one because there is no reason otherwise to have picked these two films over, say, After Earth, Elysium, The Martian, Independence Day: Resurgence or Alien: Covenant – all of which were set in space as well as cost less to make than Interstellar.

Wouldn’t it then be equally fair to say that the cost of Chandrayaan 2 is higher than the budget of After Earth, Elysium, The Martian, Independence Day: Resurgence or Alien: Covenant? However, few are going to spin the cost claim like this because:

Now, what comparing the Indian Space Research Organisation’s (ISRO’s) Chandrayaan 2’s cost to that of making Interstellar achieves very well is a sense of the magnitude of the number involved. It is an associative mnemonic that could help ensure you don’t forget how much Chandrayaan 2 cost – except you’d also have to know how much Interstellar cost. Without this bit of the statement, you have one equation and two variables. An unsolvable problem.

Additionally, media outlets have not employed such comparisons when covering other beats. For example, when the Union budget was announced on February 1 this year, nobody compared any of the numbers to the production costs of assets that had a high cultural cachet. Rs 12.5 crore was Rs 12.5 crore; it was not framed as “India spends less on annual scholarships for students with disabilities than it cost to make Kabali“.

This suggests that such comparisons are reserved by those who make them for matters of space. In turn, this raises the possibility that they are prompted to think of costs in the space sector as something that must always be brought down. And this is how this belief becomes pernicious: it assumes a life of its own; it shouldn’t. Lowering costs becomes a priority only after scientists and engineers have checked many, many other boxes. Using only dollar figures to represent this effort mischaracterises it as simply being an exercise in cost reduction.

So, comparing a mission cost to a movie budget tells us absolutely nothing of meaning or value. But thanks to how Times of India and others have phrased it, all we know now is that Chandrayaan 2 is going to cost less than $165 million (Rs 1,000 crore approx.) to make. Why not just say that and walk away? (While one could compare $165 million to mission costs at other space agencies, ISRO chief K. Sivan has advised against it; if one wants to compare it to other PSUs in India, that might not be a good idea either.) The need to bring Interstellar – an American product – into this, of course, is because of a prevalent obsession with the West and our obsession with showing it up.

Instead, we should go beyond the monetary aspects of the missions ISRO executes and examine the scientific and technological achievements embedded therein, particularly as a way to explore what ISRO has to offer to the world of space exploration more than low costs. Prevailing trends indicate that, in the near future at least, space exploration will be driven by private intentions, commitments and contracts. In this environment, claiming “ISRO is cheap” will not bode well for the organisation, the skill and technique it commands and for the country it serves. But by focusing on the products of that skill and intellect, we acquire a more healthy sense of achievement and, as a bonus, a more robust sense of progress relative to what we have achieved in the past ourselves. For example, did you know that AstroSat, India’s first space-based telescope, has an instrument that is the best in the world at what it does?

Beyond the ‘$’ prefix, $165 million is a dimensionless number. Without any other details about Chandrayaan 2 itself, it is meaningless.

Don’t celebrate frugality. It’s an unbecoming tag for any space programme. ISRO may have been successful in keeping costs down but, in the long run, the numbers will only go up. Frugality is a harmful aspiration vis-à-vis a sector banking on reliability and redundancy. Also, never compare: the act of it creates just the wrong ideas about what space agencies are doing, what they and re supposed to be doing and how they are doing it. For example, consider Sivan’s answer when asked by a Times of India reporter as to how ISRO kept its costs down:

Simplifying the system, miniaturising the complex big system, strict quality control and maximising output from a product, make the missions of Indian space agency cost-effective. We keep strict vigil on each and every stage of development of a spacecraft or a rocket and, therefore, we are able to avoid wastage of products, which helps us minimise the mission cost.

Sivan doesn’t say here what ISRO is doing differently from other space agencies (such as, say, accessing cheaper labour) but sticks to talking about what everyone already does. Do NASA and ESA waste products? Do they not remain vigilant during every stage of development? Do they not have robust quality control standards and enforcement regimes? Notice here that Sivan is not saying “we’re doing it cheaper than others”, only that doing these things keeps the space agency “cost-effective”. Cost-effective is not the same as frugal.