Even though Solibacillus kalamii has not yet been found on Earth, it is really not an extraterrestrial lifeform, either. 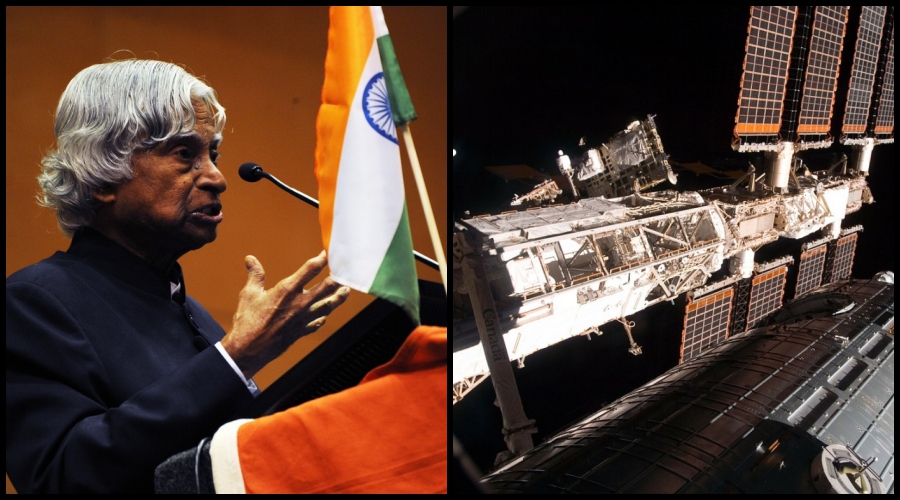 A view of the International Space Station. Credit: tpsdave/pixabay

Los Angeles: A team of scientists at NASA has named a new organism discovered by them after A.P.J. Abdul Kalam, a former president of India. Till date, the new lifeform – a bacterium – has been found only on the International Space Station (ISS) and has not been found on Earth.

Researchers at NASA’s Jet Propulsion Laboratory (JPL), California, which works on interplanetary travel, discovered the new bacterium on filters installed on the ISS. They have named it Solibacillus kalamii to honour the late president, who was an aerospace scientist. Kalam had his early training at NASA in 1963 before he set up India’s first rocket-launching facility in the fishing village of Thumba in Kerala.

“The name of the bacterium is Solibacillus kalamii, the species name is after Abdul Kalam and genus name is Solibacillus, which is a spore forming bacteria,” said Kasthuri Venkateswaran, a senior research scientist at the Biotechnology and Planetary Protection Group at JPL.

The filter on which the new bug was found remained on board the ISS for 40 months. Called a high-efficiency particulate arrestance (HEPA) filter, it is a component of the routine housekeeping and cleaning system. This filter was later analysed at JPL. Venkateswaran published his discovery in the International Journal of Systematic and Evolutionary Microbiology this year. According to him, even as it orbits Earth at some 400 kilometres altitude, the ISS is home to many types of bacteria and fungi that cohabit the station with the astronauts who live and work there. He added that even though S. kalamii has not yet been found on Earth, it is really not an extraterrestrial lifeform, either.

“I am reasonably sure it has hitch hiked to the space station on board some cargo and then survived the hostile conditions of space,” explained Venkateswaran.

Naming the new microbe after Kalam was natural to Venkateswaran and his team. “Being a fellow Tamilian, I am aware of the huge contributions by Kalam,” he said. New bacteria are usually named after famous scientists. Venkateswaran is a part of a team exploring the possibilities of alien life, and towards that his responsibilities include monitoring bug-levels on the ISS. He also has to ensure all spacecraft that fly to other planets are free of terrestrial bugs. For example, one of his tasks had been to ensure that NASA’s Curiosity, the car-sized almost-1,000-kg rover, was totally sterile when it left Earth for Mars.

According to international law, these exacting hygiene levels are required because, otherwise, other planets could get contaminated by living things from Earth.

Today, the ISS is the size of a football field and has the distinction of being the largest human-made object to be orbiting Earth. Its construction started with a launch in 1998. It weighs about 419 tonnes, can house a maximum of six astronauts at a time and has cost roughly $150 billion to build and maintain. To this day, 227 astronauts have flown to the space station. As a result, keeping it clean is critical, so that humans can live on it with relative ease. All air and water is is recycled because it is a completely closed environment. Any mould or fungi has to be removed immediately while all the walls have to be constantly protected from corrosion.

Venkateswaran’s main job is to monitor the environment of the station so that harmful bugs do not proliferate. He heads the microbial observatory on the ISS, which studies microorganisms associated with compartments owned by the US. According to NASA, he also directs several research and development tasks for JPL’s Mars Program Office, which oversees the cleaning, sterilisation and validation of spacecraft components.