Interpreting the finding raises many interesting questions about the evolution of multicellular organisms – as well as the work of Rafat Azmi from two decades ago. 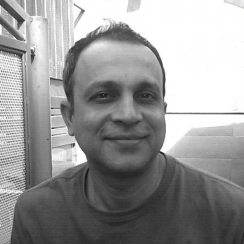 The Proterozoic Vindhyan sedimentary basin in central India contains sediments ranging in age from 1.7 billion years to about 600 million years ago. On March 14, Stefan Bengtson, a palaeontologist at the Swedish Museum of Natural History in Stockholm, and his colleagues reported three dimensional preservation of cellular structures which they interpret as multicellular red algae. These fossils have been found in the Tirohan Dolomite dated to about 1.6 billion years. Before this discovery, the earliest fossils of multicellular eukaryotes were the rhodophyte Bangiomorpha, dated to about 1.2 billion years.

The Tirohan Dolomite is exposed in the Chitrakoot region of Madhya Pradesh. The fossils occur in patches of carbonate sediment, which was replaced by the calcium phosphate mineral apatite just after their deposition in a shallow marine setting. Phosphotisation is often a very delicate process that enables the preservation of fragile cell structures. 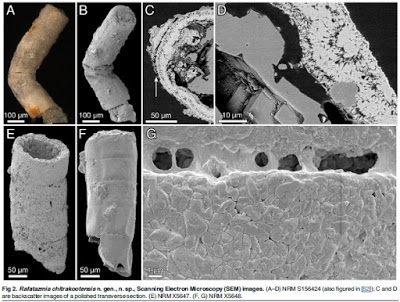 A picture of the cellular structures of red algae imaged by a scanning electron microscope. Source: Bengtson et al, 2017 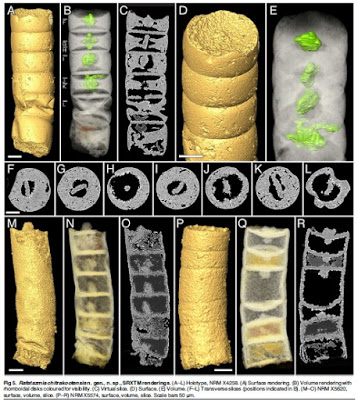 Another rendering of the three dimensional structure of the red algae imaged using synchrotron-radiation X-ray tomographic microscopy (SRXTM). The green objects inside the cell are interpreted to be organelles, components of eukaryotic cells which aid in different physiological functions. Prokaryotes (bacteria) lack such organelles. Source: Bengtson et al, 2017

I don’t want to dwell on this study too much. The paper is open access for those who want to explore further. Instead, there are two side stories that I want to comment upon.

The work of Rafat Azmi

First: The Tirohan Dolomite and its fossil assemblage has a controversial past!

They were discovered about twenty years ago by Rafat Azmi, a palaeontologist working with the Wadia Institute of Himalayan Geology, Dehradun. He reported from the Rohtasgarh area in 1998 a rich trove of filamentous and spherical forms and odd shaped mineral fragments. He interpreted the mineral fragments as “small shelly fossils” representing fragments of animal shells, and the spherical forms as possible animal embryos. Later, in 2006, he reported tubular forms that he interpreted as Cambrian animal taxa.

The problem was that animals are thought to have evolved by the latest Neoproterozoic-early Cambrian periods (600-540 million years ago), while the understanding then was that the Tirohan Dolomite is likely 1-1.5 billion years old. Azmi’s interpretation carried two enormous implications: Either the Tirohan Dolomite was much younger in age – requiring a major revision of the ages of the Vindhyan sediments – or the rocks were old (~1.5 billion years) but that animals evolved much earlier than the current fossil record indicated.

These very significant implications caught the attention of geologists and media alike. The Geological Society of India sent a team to investigate Azmi’s claims. They reported that they were unable to find the fossils he had claimed to have found.

Memories of an earlier scandal in Indian palaeontology were still fresh. In the late 1980s, Vishwajit Gupta of Punjab University had been found guilty of fraud and plagiarism. He had been misreporting fossil discoveries from the Himalayas by using museum specimens from all over the world. He had constructed an entirely fake narrative of Himalayan fossils and stratigraphy. Scientific journals were forced to retract his papers. The Paleontological Society of India produced a book authored by S.K. Shah titled ‘The Himalayan Fossil Fraud‘. But disgracefully enough, Punjab University allowed Gupta to remain in service till he retired in 2004.

Under this shadow, Azmi’s fossils came under similar suspicion. Fortunately, Bengtson and colleagues in a study some years later confirmed that these fossils did exist in the Tirohan Dolomite. However, they sampled the dolomite at Chitrakoot and not at Rohtasgarh, where Azmi’s initial claims had come from. Using absolute radiometric dating, they were able to establish that the Tirohan Dolomite is 1.6 billion years old, and that the forms, similar to those Azmi had found, are not multicellular animals.

The spherical forms were all likely gas bubbles. Some of the larger tubular forms were revealed in the present study to have been red algae. So animal evolution didn’t take place that early after all.

However, the claim of the “small shelly fossils” has not been resolved fully; Bengtson and colleagues’ work doesn’t address them. Some other researchers, though, have interpreted them as non-biogenic mineral growths. The stratigraphy and broader fossil content of the Rohtas limestone from where Azmi collected his fossils firmly indicates that it is not Cambrian but Proterozoic in age. In this present paper, the scientists have named one of the red algal forms Rafatazmia chitrakootensis in honour of Razat Azmi.

Multicellularity comes in different flavours. In simple forms of multicellularity, organisms are made up of sheets and aggregates of cells sticking to one another. There is a differentiation of somatic and reproductive cells. Communication between cells is limited. One important aspect is that all the cells are in direct contact with the environment since, in these organisms, nutrient transfer takes place by diffusion from the environment to the cell.

More complex types of multicellularity require the evolution of not just cell-to-cell adhesion but also elaborate cell-to-cell communication systems and a division of labor – i.e., cells specialised for different functions. Also, these organisms have a three dimensional arrangement of cells wherein only few cell types are in direct contact with the environment. Diffusion of nutrients from the environment is not efficient enough to supply internal cells with all the necessary life support. Molecular conduits and tissues that facilitate bulk transport and circulation of nutrients need to evolve to build this type of multicellularity. 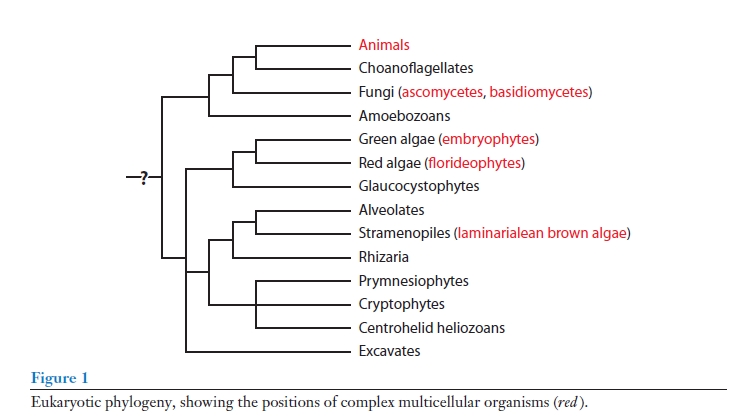 The many origins of the complex type of multicellularity (in red) in different eukaryote branches. Source: Andrew H. Knoll, 2011

So, based on cell type, life is divided into two domains. The prokaryotes (bacteria and archaea) have smaller and simpler cells. Eukaryotes are generally larger and are made up of more complex cells. The latter cell type evolved by a symbiotic merger between two types of prokaryote cells. Prokaryote fossils have been found in rocks older than three billion years. The eukaryote fossil record begins in rocks younger than two billion years. The timing of the origin of eukaryotes is unclear. Estimates range from 2.5-1.5 billion years ago.

The red algae fossils show that eukaryotes had already diverged into different branches by 1.6 billion years ago, which means that the unicellular ancestor of eukaryotes evolved before that. It also means that red algae took the road to multicellularity much earlier than animals.

Does complexity evolve necessarily whenever genetic potential is available? Or does it depend on ecologic opportunity? If the cellular machinery and the underlying genetic regulatory systems required for multicellularity evolved in the ancestors of red algae by 1.6 billion years ago, why did multicellular animals not evolve earlier as well? It could well be that there were ecologic conditions limiting the evolution of physiologically demanding creatures like animals.

The end of the Neoproterozoic ice-ages by about 650 million years ago, and the break up of supercontinent Rodinia, impacted seawater chemistry. Seawater oxygen increased to threshold levels permitting a more active life style. Increased weathering of continents brought into the oceans metals like zinc, which are crucial for physiological functions. The creation of larger continental shelves and shallow water zones due to continental breakup provided varied ecologic spaces for diversification. Animal evolution was triggered in this ecological context.

This article was originally published on Suvrat Kher’s blog and has been reproduced here with permission.

Note: This article was corrected on March 20, 2017, to state that Rafat Azmi had collected his fossils from the Rohtasgarh area, not Chitrakoot as had been stated earlier.