Three physicists have predicted that finding 'echoes' of gravitational waves coming from blackhole mergers might be signs of a theory that finally unifies quantum mechanics and general relativity. 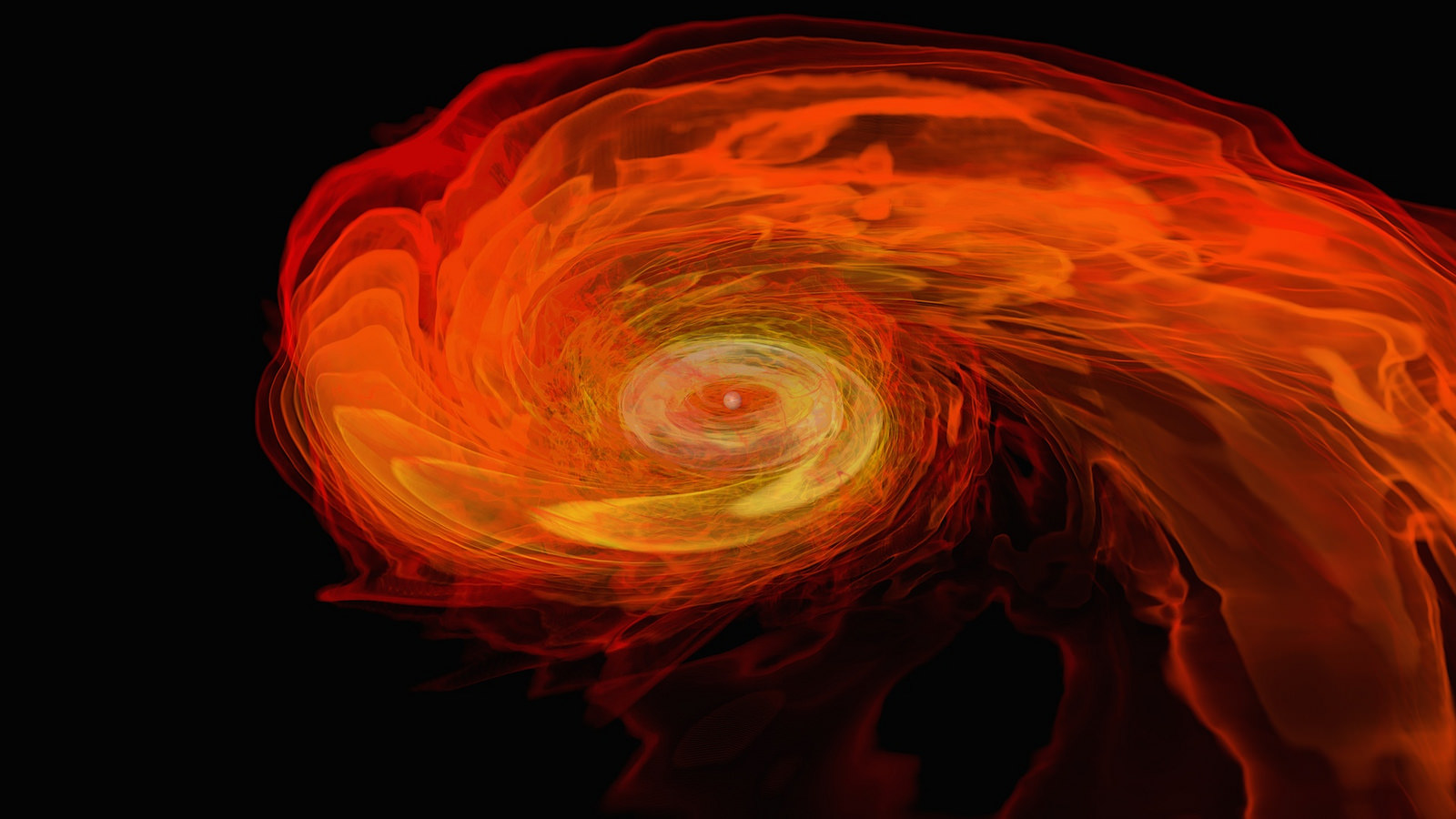 A computer simulation shows two neutron stars, the extremely dense cores of now-dead stars, smashing into each other to form a blackhole. Credit: NASA Goddard Space Flight Centre/Flickr, CC BY 2.0

Your high-school physics teacher would’ve likely taught you to think about the smallest constituents of nature by asking you to start with a large object – like a chair – and then keep breaking it down into smaller bits. For the purposes of making sense of your syllabus, you probably stopped at protons, electrons and neutrons. That’s a pity because, if you’d kept going, you’d have stumbled upon some of the biggest mysteries of the universe. At some point, you’d have hit the Planck scale: the smallest region of space, the shortest span of time. This is the smallest scale that quantum mechanics can make sense of, and this is where many physicists expect to find the fundamental particles that make up space itself.

If this region – or some phenomena that are thought to belong exclusively to this region – are found, then physicists will have made a stunning discovery. Apart from finding the ‘atoms’ of space, they’d have opened the doors to marrying the two biggest theories of physics: quantum mechanics and the theory of general relativity (GR). The former’s demesne is the small and smaller particles you passed along the way to the Planck scale. The latter’s is the largest distances and spans of time in the universe. And the discovery would be stunning because GR, created by Albert Einstein 101 years ago, doesn’t allow space to have any constituent ‘atoms’. For GR, space is smooth. And it is this fundamental conflict that has prevented the theories from being reconciled into a single ‘quantum gravity’ theory.

But the first signs of change might be here.

In 2015, the twin Laser Interferometer Gravitational-wave Observatories (LIGO) in the US had made the first direct detection of gravitational waves. These are ripples of energy sent strumming through space at the speed of light when a massive object accelerates. LIGO had in fact detected gravitational waves created by two blackholes that were spinning rapidly around each other before colliding and merging to form a larger blackhole. The discovery was unequivocal proof that Einstein’s GR was valid and realistic. But curiously enough, three physicists recently announced that the discovery may have in fact achieved the opposite: invalidate GR and instead signal proof that the first signs of quantum gravity may have been found.

A blackhole is a particularly interesting thing. One is formed when the core of a dying star of a certain kind becomes so massive that, after the initial supernova explosion, it collapses inwards, tightly curving space around itself such that even light can’t escape its prodigious gravity. A blackhole is a consequence of GR – though Einstein didn’t himself predict its existence first. At the same time, because of its freaky nature, a blackhole also often exhibits quantum mechanical properties that physicists have been interested in for their potential to reveal something about quantum gravity. And many of these properties have to do with the blackhole’s outer shell: the event horizon, behind which nothing can escape the blackhole’s heart no matter how fast it is moving away.

GR can’t perfectly predict what the insides of a blackhole are like – and the theory simply breaks down when it comes to the blackhole’s heart itself. But using LIGO’s data when it tuned in to the mergers of two blackhole-pairs in 2015, three physicists are now saying there’s some reason to believe GR may be breaking down at the event horizon itself. They say they are motivated by having spotted signs (in the data) of a quantum-gravity effect known simply as an echo.

According to GR, the event horizon is a smooth and infinitely thin surface: at any given moment, you’re either behind it, falling into the blackhole, or in front of it, looking into the abyss that is the blackhole. But according to quantum mechanics, the event horizon is actually a ‘firewall’ of particles popping in and out of existence. You step into it and you’re immediately incinerated. But apart from making for an interesting gedanken experiment about suicidal astronauts, the existence of such a firewall can have very real consequences.

When two blackholes collide to form a larger blackhole, there is a very large amount of energy released. In LIGO’s first detection of a merger, made on September 14, 2015, two blackholes weighing 29 and 36 solar masses merged to form a blackhole weighing 62 solar masses. The remaining three solar masses – equivalent to 178.7 billion trillion trillion trillion joules of energy – were expelled as gravitational waves. If GR has its way, with an infinitely thin event horizon, then the waves are immediately expelled into space. However, if quantum mechanics has its way, then some of the waves are first trapped inside the firewall of particles, where they bounce around like echoes depending on the angle at which they were ensnared, and escape in instalments. Corresponding to the delay in setting off into space, LIGO would have detected them similarly: not arriving all at once but with delays. LIGO original template for GW150914, along with Abedi-Dykaar-Afshordi’s best fit template for the echoes. Caption and credit: arXiv:1612.00266

The three physicists – Jahed Abedi, Hannah Dykaar and Niayesh Afshordi – simulated firewall-esque conditions using mirrors placed close to a computer-simulated blackhole to determine the intervals at which gravitational echoes from each of the three events LIGO has detected so far would arrive at. When they had their results, they went looking for similar signals in the LIGO data. In a pre-print paper uploaded to the arXiv server on December 1, the trio writes that it did find them, with a statistical significance of 2.9 sigma. This is a mathematical measure of confidence that’s not good enough to technically be considered evidence (3 sigma), let alone proof of any kind (5 sigma). And when tested for each event, the odds are lower: they max out at 2 sigma in the case of the merger known as GW150914, the first one that LIGO detected. Finally, even if the signal persists, it might not ultimately be due to quantum gravity at all but some other sources.

Nonetheless, the significance isn’t zero – and the LIGO team has confirmed that it is looking for more signs of echoes in its data. Luckily for everyone, the detectors also recently restarted with upgrades to make them more sensitive, to more accurately study the gravitational wave signals arising from blackholes of diverse masses. If future experiments can’t detect stronger echoes (or eliminate existing sources of noise that could be clouding observations), then that’s that for this line of verifying quantum gravity. But until then, it wouldn’t be amiss to speculate on its veracity – or on variations of it that might yield better results, results closer to LIGO’s capabilities – if only because the data that LIGO collects for each merger is so complex.

Ultimately, the most heartening takeaway from the Abedi-Dykaar-Afshordi thesis is that there is an experimental way to confirm the predictions of quantum gravity at all. Physicists have long held it to be out of human reach. This is obvious when you realise the Planck length is 100-billion-billion-times smaller than the diameter of a proton and the Planck second is 10-billion-billion-billion-times smaller than the smallest unit of time that some of the most powerful atomic clocks can measure. If quantum gravity is a true theory, then it will be to nature’s unending credit that it spawned blackholes that can magnify the effects of such infinitesimal provenance – and to humankind’s for building machines that can eavesdrop on them.

An Indian LIGO detector is currently under development and is expected to join the twin American ones to study gravitational waves by 2023.