Although the data's statistical significance isn't as good as it would have to be for there to be a new 'champagne bottle boson' moment, it's encouraging that the data itself isn't vanishing. 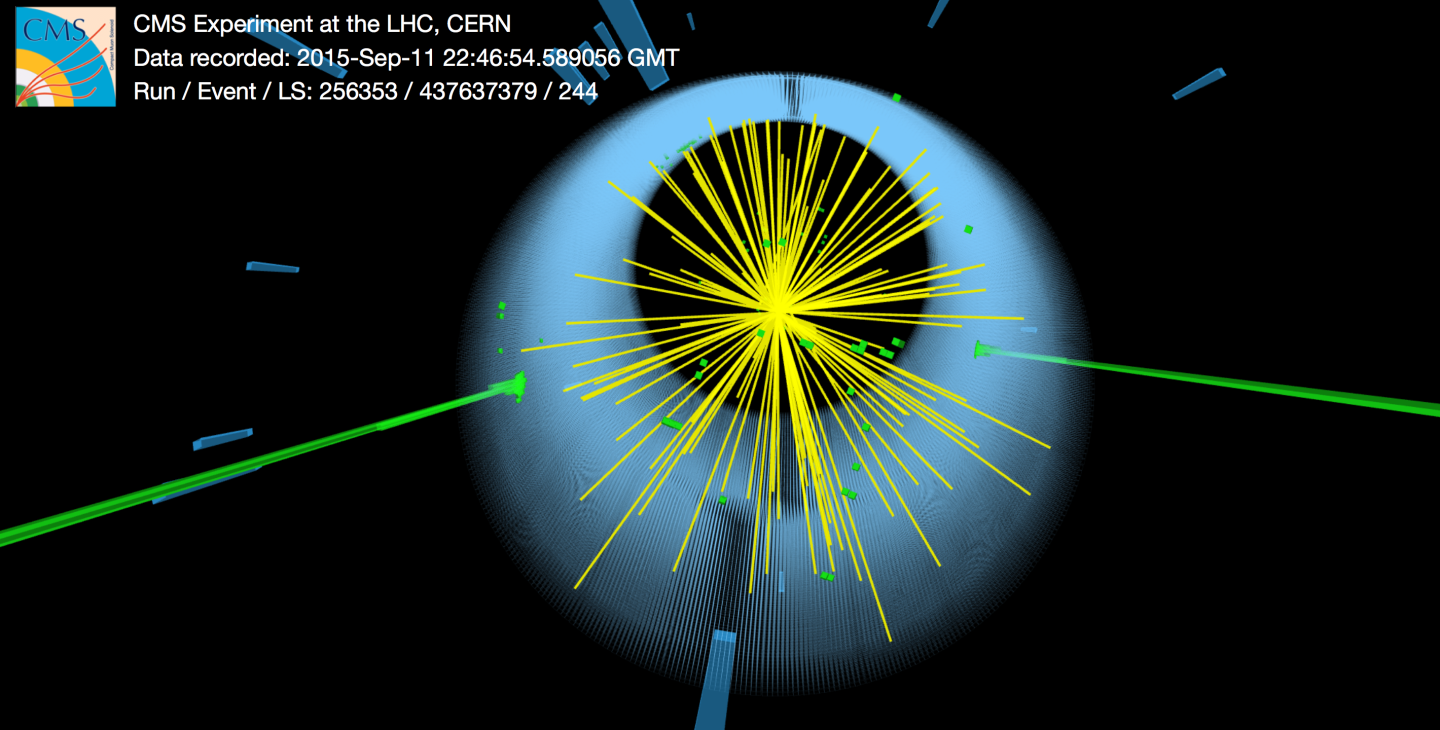 This image shows a collision event with a photon pair observed by the CMS detector in proton-collision data collected in 2015 with no magnetic field present. The energy deposits of the two photons are represented by the two large green towers. The mass of the di-photon system is between 700 and 800 GeV. The candidates are consistent with what is expected for prompt isolated photons. Caption & credit © 2016 CERN

On December 15 last year, scientists working with the Large Hadron Collider experiment announced that they had found slight whispers of a possible new fundamental particle, and got the entire particle physics community excited. There was good reason: should such a particle’s existence become verified, it would provide physicists some crucial headway in answering questions about the universe that our current knowledge of physics has been remarkably unable to cope with. And on March 17, members of the teams that made the detection presented more details as well as some preliminary analyses at a conference, held every year, in La Thuile, Italy.

The verdict: the case for the hypothesised particle’s existence has got a tad bit stronger. Physicists still don’t know what it could be or if it won’t reveal itself to have been a fluke measurement once more data trickles in by summer this year. At the same time, the bump in the data persists in two sets of measurements logged by two detectors and at different times. In December, the ATLAS detector had presented a stronger case – i.e., a more reliable measurement – than the CMS detector; at La Thuile on March 17, the CMS team also came through with promising numbers.

And right now, particle physicists have this scoreboard, as compiled by Alessandro Strumia, an associate professor of physics at Pisa University, who presented it at the conference:

Pauline Gagnon, a senior research scientist at CERN, explained on her blog, “Two hypotheses were tested, assuming different characteristics for the hypothetical new particle: the ‘spin 0’ case corresponds to a new type of Higgs boson, while ‘spin 2’ denotes a graviton.” A graviton is a speculative particle carrying the force of gravity. The – rather, a – Higgs boson was discovered at the LHC in July 2012 and verified in January 2013. This was during the collider’s first run, when it accelerated two beams of protons to 4 TeV (1,000 GeV = 1 TeV) each and then smashed them together. The second run kicked off, following upgrades to the collider and detectors during 2014, with a beam energy of 6.5 TeV.

Although none of the significances are as good as they’d have to be for there to be a new ‘champagne bottle boson’ moment (alternatively: another summertime hit), it’s encouraging that the data behind them has shown up over multiple data-taking periods and isn’t failing repeated scrutiny. More presentations by physicists from ATLAS and CMS at the conference, which concludes on March 19, are expected to provide clues about other anomalous bumps in the data that could be related to the one at 750 GeV. If theoretical physicists have such connections to make, their ability to zero in on what could be producing the excess photons becomes much better.

But even more than new analyses gleaned from old data, physicists will be looking forward to the LHC waking up from its siesta in the first week of May, and producing results that could become available as early as June. Should the data still continue to hold up – and the 5σ local significance barrier be breached – then physicists will have just what they need to start a new chapter in the study of fundamental physics just as the previous one was closed by the Higgs boson’s discovery in 2012.

For reasons both technical and otherwise, such a chapter has its work already cut out. The Standard Model of particle physics, a theory unifying the behaviours of different species of particles and which requires the Higgs boson’s existence, is flawed despite its many successes. Therefore, physicists have been, and are, looking for ways to ‘break’ the model by finding something it doesn’t have room for. Both the graviton and another Higgs boson are such things although there are other contenders as well.