There is a perception that the organised scientific community has been "conspicuously" silent and that it was high time that changed and they started engaging with society. 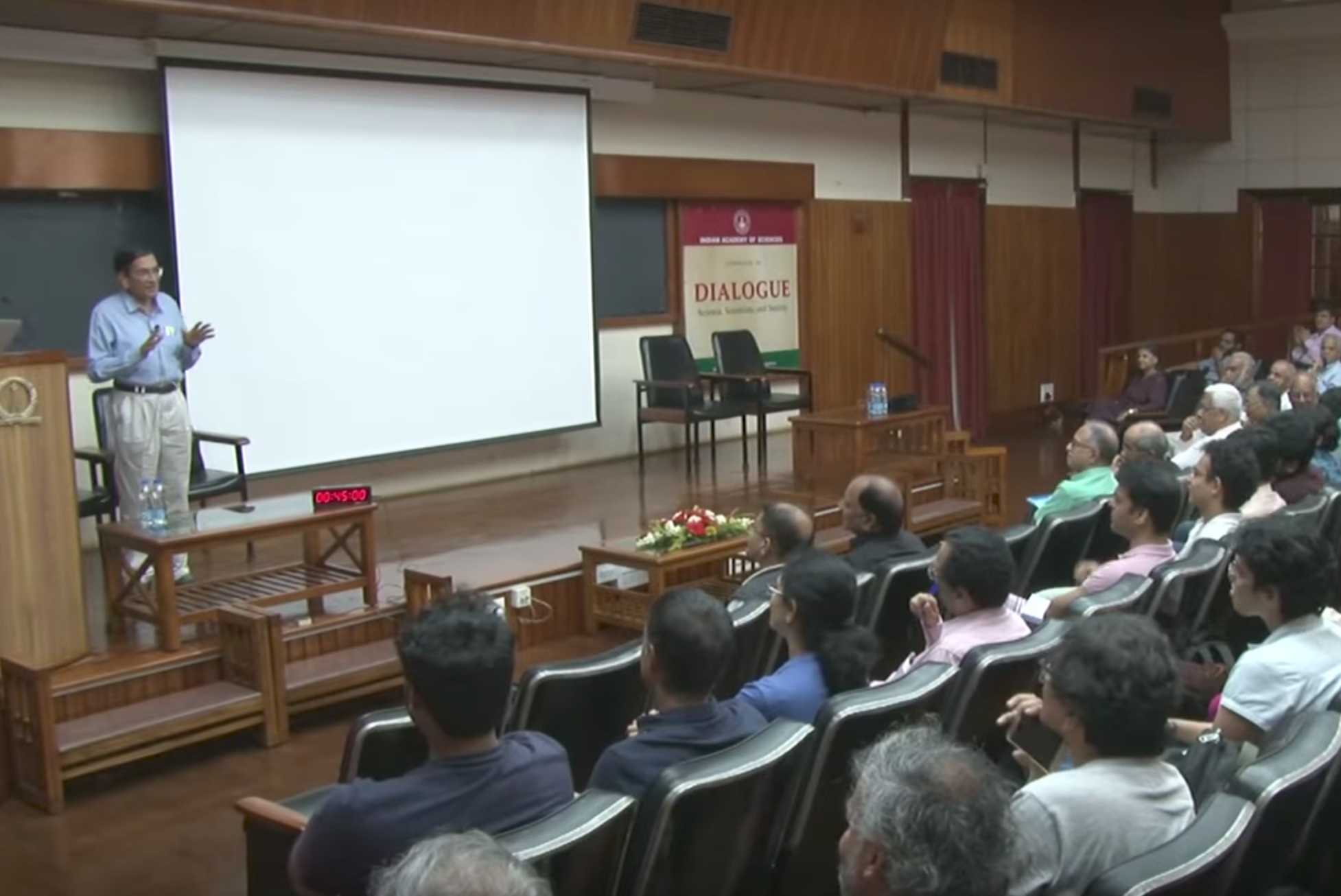 P Balaram during his talk at the Dialogues event in Bengaluru in October 2017. Source: YouTube

Bengaluru: A blank stare met my eyes and the conversation suddenly turned to traffic woes in the city. This happened when I was trying to explain to my neighbour what I did as a scientist. And this was not the first time something like this had happened. After having seen glazed eyes many times, I quit talking about what I do, steering the conversation towards easier topics.

It’s difficult to talk about science with a non-scientist and more so with society at large, especially in India. The scientific temper does not seem to have caught on. Jawaharlal Nehru had described it as a way of life, where asking questions, observing, hypothesising and testing formed an integral part of everyone’s everyday lives. “What has happened in India over the years is that scientific communication with the society has not been happening,” said Amitabh Joshi, an evolutionary biologist at the Jawaharlal Nehru Centre for Advanced Scientific Research, Bengaluru, and the editor for publications of the Indian Academy of Sciences. Scientists have mostly failed in communicating a scientific ethos to the society, according to him… that the notion that science is more than satellites, bombs, crops and dams has been lost.

How science is communicated to society in India has not changed much over the decades. Perhaps what has improved and become popular in the last several years is communicating key scientific findings in simpler terms to the public. However, as Joshi says, this is only one part of science-society communication.

To promote a renewed dialogue between scientists on the one hand and science administrators, policymakers, students and the public at large on the other, the Indian Academy of Sciences (IAS) has floated an initiative with an academic journal called Dialogue: Science, Scientist, and Society as its centrepiece. The journal will publish peer-reviewed scholarly articles written by academics under the themes of how science is practiced, how it is communicated, what impact it has on society and how society affects it in return. The first articles are expected to be published from January 2018. The IAS hopes that its pages will be a forum for serious discussions on scientific policy and the science-society interface.

“It is a place where academic ideas are discussed, critiqued, and made permanently accessible as part of the academic literature,” says Mukund Thattai, of the National Centre for Biological Sciences, Bengaluru. Thattai was part of the symposium organised by the IAS announcing the journal’s launch. Although non-academics would find it hard to read, he emphasised that not only academics in the natural sciences and engineering but social scientists and humanities scholars would also be contributors. Thattai is not affiliated with the journal.

A journal taking such a broad view of the science-society interface is a first in India, and has few peers in the whole world. Most journals that talk about science and society tend have a narrower focus, such as science policy or environmental policy.

Joshi hopes that, apart from academics, the journal will also be read by policymakers. Many government policies that affect society have a major scientific component, such as development projects that encroach forests and whether or not to allow genetically modified crops.

The group missing in policy development and communications has been the scientific community. If scientists do speak out, it is usually to give a statement based on their position, generally as a spokesperson for the government. “The organised scientific community has been conspicuously silent,” says Joshi, adding that it was high time they changed and started engaging with society.

At the same time, it remains to be seen if non-academics such as policymakers or science administrators will really read articles in an academic journal, as Joshi hopes, irrespective of how relevant the topic may be. Scholarly articles, in spite of being thorough and rigorous, are rarely read by anyone other than academics in that particular field. And sometimes scientists themselves find such articles hard to understand.

“That is my concern,” says Suvrat Kher, a geologist and science writer. “I just cannot imagine how the broader public will readily access and get something out of it.” Although very good papers will probably be published in the journal, it will all probably stay within the scientific community. Then, there is the question of what happens after a collection of papers, e.g. on policy, are published. Kher asks: Will there be a concerted effort to put it forward to the concerned ministry and have a discussion around it? Will it translate into some actionable program?

In addition, a dialogue usually implies a relatively quick give and take of information. Articles in academic journals generally report new findings, a one-way process. With their formal, often jargon-filled style and a peer-review process, they rarely are suited for a dialogue or debate.

Joshi is aware of such concerns. That is why although the journal is the principal component of this initiative by the IAS, they have come up with additional programs that may appeal to a broader audience.

For example, the academy has a web-based forum called ‘Confluence’ that will house discussions on any topic pertaining to science and society. Moderated by the editorial team, mainly to ensure decorum, it will contain shorter articles or essays about a thousand words long. These pieces will not require the academic rigour of the journal and will be written in language that is easier to understand. Anyone with a specific idea can use this forum to put a point across, and their posts will be open to comments. Every article published in the journal Dialogue will have an area for comments in ‘Confluence’. It is expected to go live in two weeks or so.

“This is a good step,” says Kher. But there have to be concerted efforts to ensure effective interaction with the public, e.g. high school students or college students. Given our entrenched reading habits, busy schedules and other distractions, Kher is concerned the site may not receive enough traffic to really serve as a platform for discussion. “They’ll have to take it one step further to develop more direct interfaces with the public, rope in the public to give their inputs.”

This is where other efforts by the IAS could help: it also plans to conduct regular symposia, panel discussions and town-hall meetings at different places in the country, all open to the public. The first such meeting happened early October at the Indian Institute of Science, Bengaluru, where the journal was formally launched. Another panel discussion was held in Delhi earlier this month. This will be an ongoing activity, says Joshi, in an attempt to begin to listen to each other.

“There is a desire in the public to know more, but not much quality info is getting out,” says Kher. According to him, the number of people following his blog has risen in the recent past. These people come from diverse backgrounds; they are students, researchers, folks interested in nature and retired people.

Communicating science can change perceptions. Although there has been an increase in the number of Indian scientists taking to social media to communicate their work, it is still limited compared to the amount of scientific work being done. However, such efforts should not be simply limited to communicating new findings. Other aspects of science such as issues and challenges in practicing science, how the public wants science and scientists to help solve societal problems, and a perspective of science as a quest to understand the mysteries of the universe rather than just being a tool to solve problems is just as important. This initiative by the IAS may be a step in that direction.

But for this idea to succeed, there has to be a sustained effort to include the broader public and hold their attention. As Thattai sums it up, “The journal is a vessel, a platform. How it is used will depend on its users and we will have to see how this plays out.”