The most pressing questions about the gas giant have to do with its origin, interior, atmosphere and magnetosphere. These are exactly what Juno intends to study. 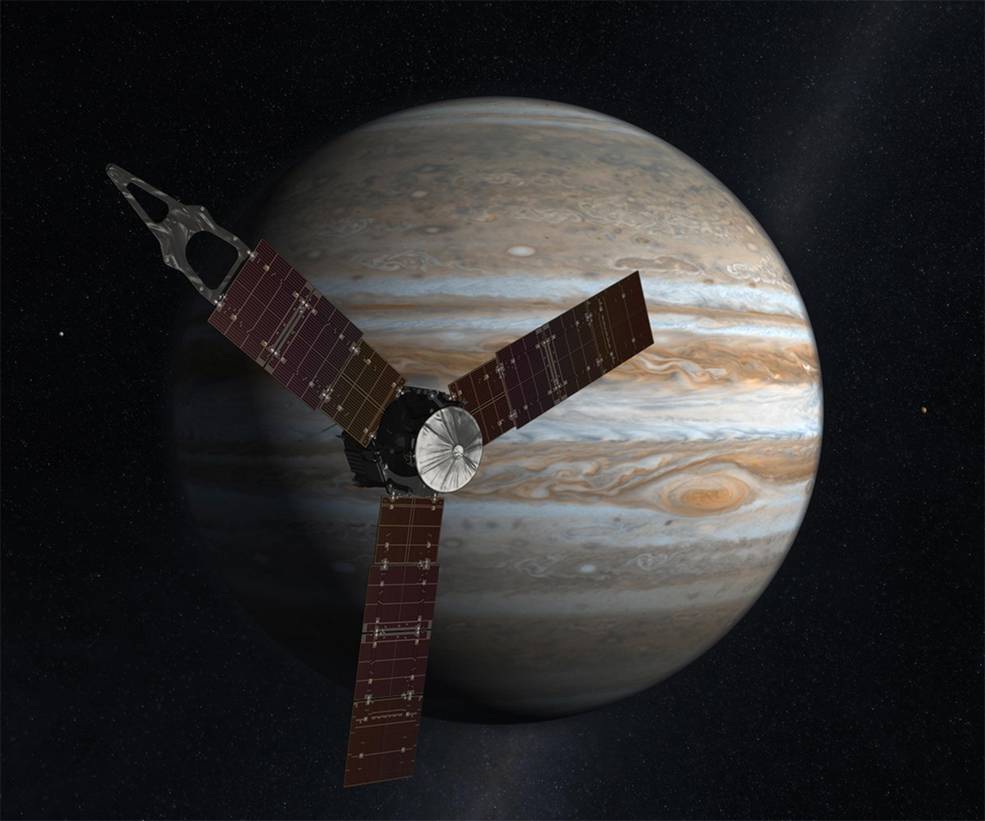 An artist's illustration of Juno, with Jupiter in the background. Credit: NASA/JPL-Caltech

Santa Ana, California: The JUpiter Near-polar Orbiter (Juno) is a NASA mission currently on its way to Jupiter, to reach the orbit of the planet on July 4. The craft will be orbiting Jupiter over its poles and will study the planet’s atmosphere, magnetosphere and gravity.

Juno is the first solar-powered mission to be sent to Jupiter, going farther than any other solar-powered mission before it. After its dramatic 35-minute insertion, Juno will manoeuvre through two elongated orbits over 106 days, and then enter into a fourteen day polar orbit. At its closest approach, Juno will be barely 5,000 km away from the top of Jupiter’s clouds. The craft is about the size of a full basketball field and has three arms. Considering sunlight at Jupiter is only 1/25th as strong as that at Earth (about the size of a big lightbulb in the sky), Juno is optimised to achieve maximum efficiency. The principal way this is done is by having the craft spin as it moves, twice per minute. Each device and camera on its body can obtain readings, measurements, and images from different angles, providing varying degrees of measurements and increasing accuracy of readings.

Its primary goal is to understand the origin and evolution of the gas giant. Although the planet is the largest in our Solar System and easily visible through even the most basic of telescopes, it still possesses many unsolved mysteries. We know what we see over the planet are clouds, but we don’t know what the composition of Jupiter’s gaseous atmosphere exactly is. We do not know what Jupiter’s core is made of nor how its gigantic magnetic field was formed.

In fact, we don’t have all the details of how Jupiter formed. And the most pressing questions about this planet have to do with its origin, interior, atmosphere and magnetosphere. These are exactly what Juno intends to study.

According to the official website, Juno’s mission objectives are (quoting verbatim):

* Determine how much water is in Jupiter’s atmosphere, which helps determine which planet formation theory is correct (or if new theories are needed)

To achieve these mission objectives, Juno has eight scientific instruments and a camera on board that weigh a combined 3,625 kg. The probe’s main challenge will be to orbit Jupiter in such a way that the giant planet’s radiation belt is avoided. Jupiter has a donut shaped radiation belt around it, flaring out on either side. Juno will be on a highly elliptical orbit, passing between Jupiter and its magnetic field, and then being flung away for two weeks to recover, before coming back toward Jupiter. At the same time, the craft will unavoidable encounter increasing doses of massive amounts of radiation during its mission. Therefore, the lifetime of the mission is just one year, at the end of which exposure to over 20 million rads of radiation will have damaged most instruments on board. By measuring the speed of Juno as it falls while in orbit around Jupiter, the planet’s gravity and gravitational interactions with other bodies can be measured. Jupiter is also the solar system’s biggest source of radio waves, and an instrument called the microwave radiometer will study and measure this radiation and so indirectly study the planet’s interior as well as the composition of its atmosphere. Jupiter also has colourful auroral displays due to its magnetosphere. These will be photographed and studied by two instruments on board that will then measure the gases in the atmosphere. There’s a magnetometer that will map and study the magnetic field. There are UV and visible light cameras that will take numerous pictures, especially for science outreach and education.

Juno was launched atop an Atlas V rocket on August 25, 2011. After a gravity assist from Earth, the probe has been coasting through the Solar System for five years. The craft will perform its mission objectives over twenty months and 37 orbits before crashing into Jupiter, carefully steering away from potentially habitable moons. Juno will be the second craft to orbit Jupiter after the Galileo craft, which also plunged into Jupiter’s atmosphere and burned up in 2003.

Jupiter was the first planet to form in our Solar System. Since there was so much raw material for it to use, it quickly grew in size, sucking a large portion of the ice and gases that existed farther away from the Sun. So understanding what lies within Jupiter’s magnificent swirling clouds will give us an insight into how the planet was formed. And understanding how Jupiter was formed will be a giant step toward understanding how our planetary neighbourhood and, ultimately, how our own planet was formed.