NASA Juno Spacecraft In Orbit Around Jupiter After Five-Year Journey

This is the second dedicated mission to be sent to Jupiter, and will run for 20 months before the instruments are severely damaged by radiation. 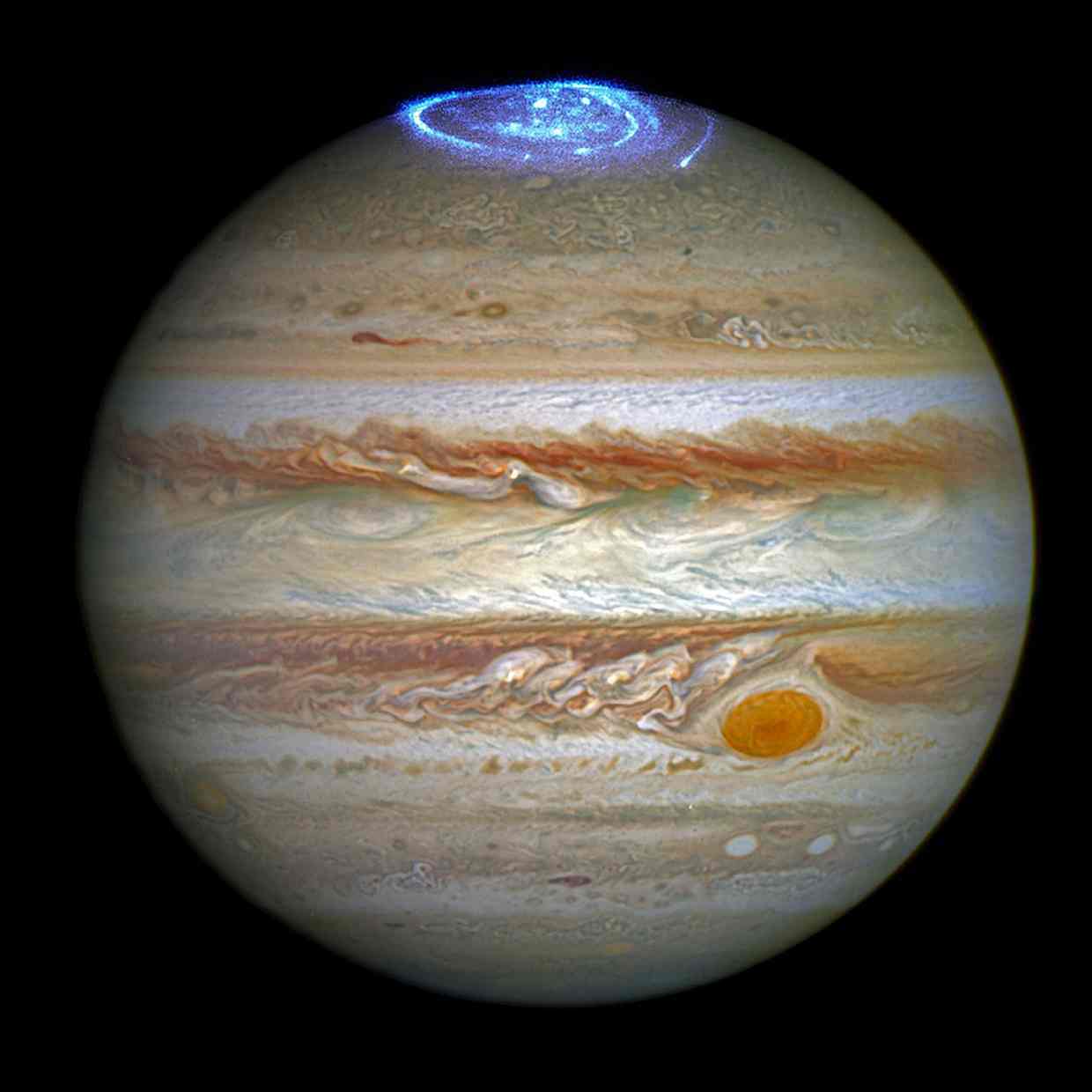 A Hubble space telescope image showing an aurora over one of Jupiter's poles. Credit: NASA/ESA

The romance of Jupiter is its size, its world-sized storms and aurorae, its cloud of moons, its caustic radiation. As the fifth planet from the Sun, and 588 million km from Earth, the gas giant is a mystery for many reasons despite its obvious presence in many night skies. That’s why Juno is there – the spacecraft launched by NASA in 2011 to study the planet, and just under an hour ago, successfully firing its engines to slow down enough to be captured by Jupiter’s gravity into a loopy orbit around the planet. This is the second dedicated mission to be sent to Jupiter, and will run for 20 months before it gets very close to the planet and burns up.

Beginning at about 8 am, Juno’s onboard computer began preparations to allow Jupiter’s prodigious gravity to capture the spacecraft. For this, Juno had to slow down considerably by firing its main engines, stabilise itself by slowly spinning, to 5 rpm up from 2 rpm, as well as keep itself protected from radiation. If Juno had flown too fast, Jupiter wouldn’t have been able to capture and the mission would’ve ended. This is why the main engine was fired for 35 minutes – to bring its velocity down from 265,000 kph to around 2,000 kph. At the same time, even if it took Juno five whole years to fly to the planet, it also had to ensure that locked itself into an orbit around Jupiter within a 35-minute window (with a puny 10-minute margin). If this window was missed, then Juno would’ve either run into one of Jupiter’s moons and crashed or become damaged by radiation surrounding the planet.

As it happens, Juno got itself into orbit around Jupiter with an error of one second. Let the precision sink in.

Because Jupiter is so far from the Sun, Juno is equipped with three solar panels each the size of a school bus to power itself. It carries nine instruments and altogether weighs 3.6 tonnes. As the spacecraft’s project manager, Rick Nybakken, has been wont to say, Juno is effectively a solar-powered armoured tank. Interestingly, it’s also the farthest solar-powered spacecraft now. The distance between Juno and Earth at the moment is around 2,900 light-seconds (over 48 light-minutes), and that’s the time signals relayed by the spacecraft will take to reach receivers on Earth.

It got into orbit around Jupiter by performing all its manoeuvres on battery power, and will now have to keep itself pointed toward the Sun so its panels can recharge. Then again, its current orbit is not its final orbit, and that will only be achieved four months hence. Right now, the spacecraft is in a highly elliptical orbit, with the planet at one end of it, that it will take 53 Earth-days to complete. As astrophysicist Katherine Mack commented, Juno in this orbit will be barreling in to get close to Jupiter, quickly capturing some images and making some measurements, then quickly flying away from the radiation – on repeat. After flying in this orbit twice, Juno will slip into a tighter orbit that will take it close to the planet once every 14 days, and when the craft’s science mission will begin in earnest. And finally, in 2018, Juno will get close enough to pommel through Jupiter’s clouds and burn itself up.

Juno is actually a backronym for JUpiter Near-polar Orbiter, a name that describes its orbit: around the planet’s poles. And like a spinning bangle, Juno will maintain this orbit even as it moves sideways, effectively surveying the entire planet from pole to pole in 37 orbits. Its instruments will measure the presence of water in Jupiter’s atmosphere, study its atmosphere and behaviour of its roiling clouds and storms, measure changes in the gravitational and magnetic fields (used as a proxy to figure what the planet’s insides could be like) and observe the planet’s majestic aurorae.

These curtains of light are the result of interactions between radiation coming from the Sun interacting with particles in the space above Jupiter’s poles. On Earth, they’re known to span the distance of entire cities in the night sky over countries like Sweden and Norway. But on Jupiter, it’s a different story: a few days before Juno’s orbital insertion, the Hubble space telescope captured an aurora over Jupiter’s north pole within whose ambit both Ears and Mars could’ve comfortably fit. Such magnitude is possible because Jupiter’s magnetic field is 20,000-times stronger than Earth’s.

Engine burn complete and orbit obtained. I’m ready to unlock all your secrets, #Jupiter. Deal with it.

The last mission to Jupiter was the NASA Galileo mission, which operated from 1995 to 2003 and significantly upped our understanding of the planet’s atmosphere. One of its more notable discoveries was of evidence that pointed to the presence of an ocean of liquid water under the icy surface of Europa, one of Jupiter’s moons. On the back of this, as well as data sent by the Cassini mission currently studying Saturn, NASA okayed a mission to Europa in June 2015. The spacecraft is expected to be launched in 2022. Around the same time, in the mid-2020s, the European Space Agency will launch its JUICE (JUpiter ICy moons Explorer) mission to study Jupiter’s moons beginning in 2030.

US "Juno" probe of Jupiter is utter failure, as malfunctioning contraption takes 5 years to arrive and discovers only one insignificant moon