Over 1,500 Participate in Bengaluru Edition of India's 'March for Science'

The hope of scientists is that the ‘March for Science’ will have been a slap to those attitudes that trivialise modern scientific pursuits in favour of obscurantist notions. 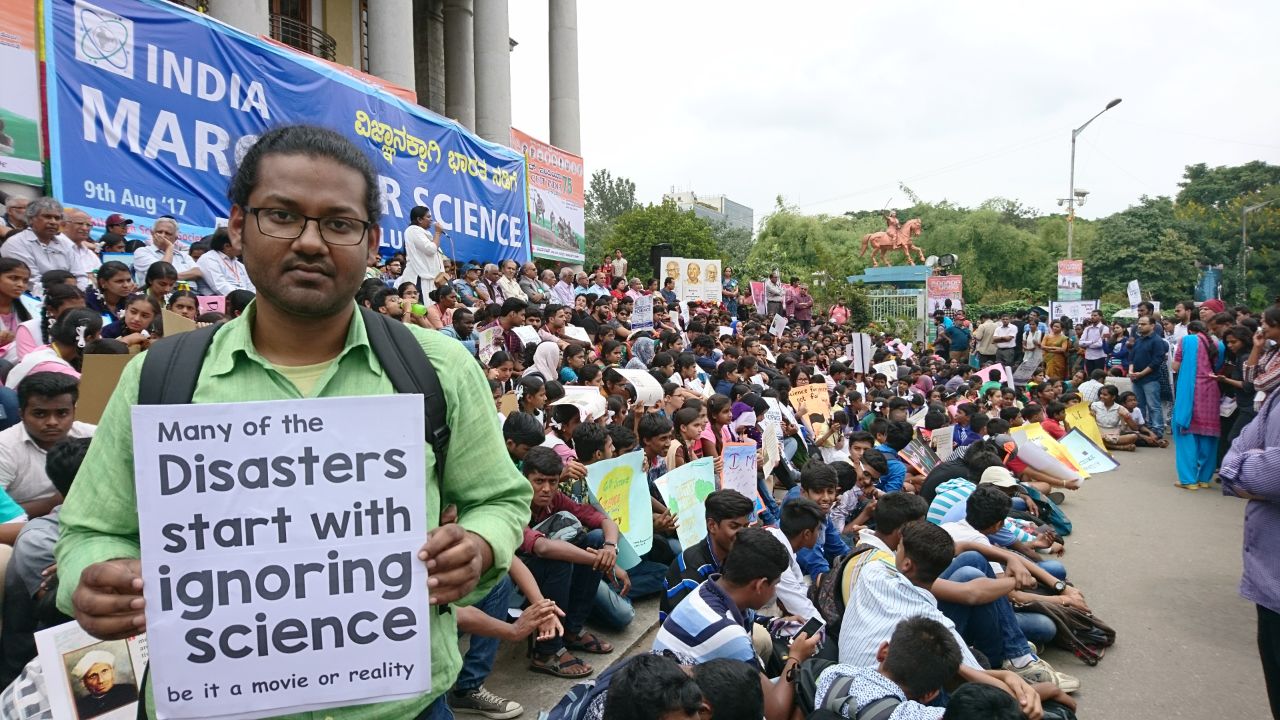 At the March for Science in Bengaluru. Credit: Subham Rath

Subham Rath is a PhD research scholar at the Centre for Atmospheric and Oceanic Sciences, Indian Institute of Science, Bengaluru.

Bengaluru: On August 9, these words of Rabindranath Tagore resonated among the thousands of students, researchers, professors and scientists who had took to the streets around India to air their grievances against the propagation of unscientific ideas and a rampant intolerance of scientific thinking.

In April this year, hundreds of thousands of people gathered in more than 600 cities around the world demanding that their respective governments treat with science as an important political entity and as an instrument in government policymaking. India had been unable to participate in that movement at the time. However, on the back of funding cuts for the Council of Scientific and Industrial Research (CSIR) labs and premier research institutes in the country, the proliferation of pseudo-scientific ideas in campus corridors and a persistent government endorsement of obscurantist notions from religious texts, scientists and concerned citizens had been forced to act as well. The Breakthrough Society, together with different science organisations around the country, organised India’s ‘March for Science’ on August 9.

Over 1,500 people in Bengaluru responded to the call on a weekday, during office hours, reflecting their commitment to upholding the scientific temper. The march began at the Town Hall, near the city’s centre, and went up to the Senate Hall 4 km away. Students, researchers, scientists, professors from institutes like the Jawaharlal Nehru Centre for Applied Scientific Research, the Indian Institute of Science, the International Centre for Theoretical Sciences, St. Joseph’s college, the National Institute of Advanced Studies, etc. were among the participants. Hundreds of school students also joined the march and with pledges to carry forward the legacy of Narendra Dabholkar, U.R. Rao, Yash Pal and Puspha Mittra Bhargava, and persevere against beliefs in superstitions, black magic, religious propaganda, etc. 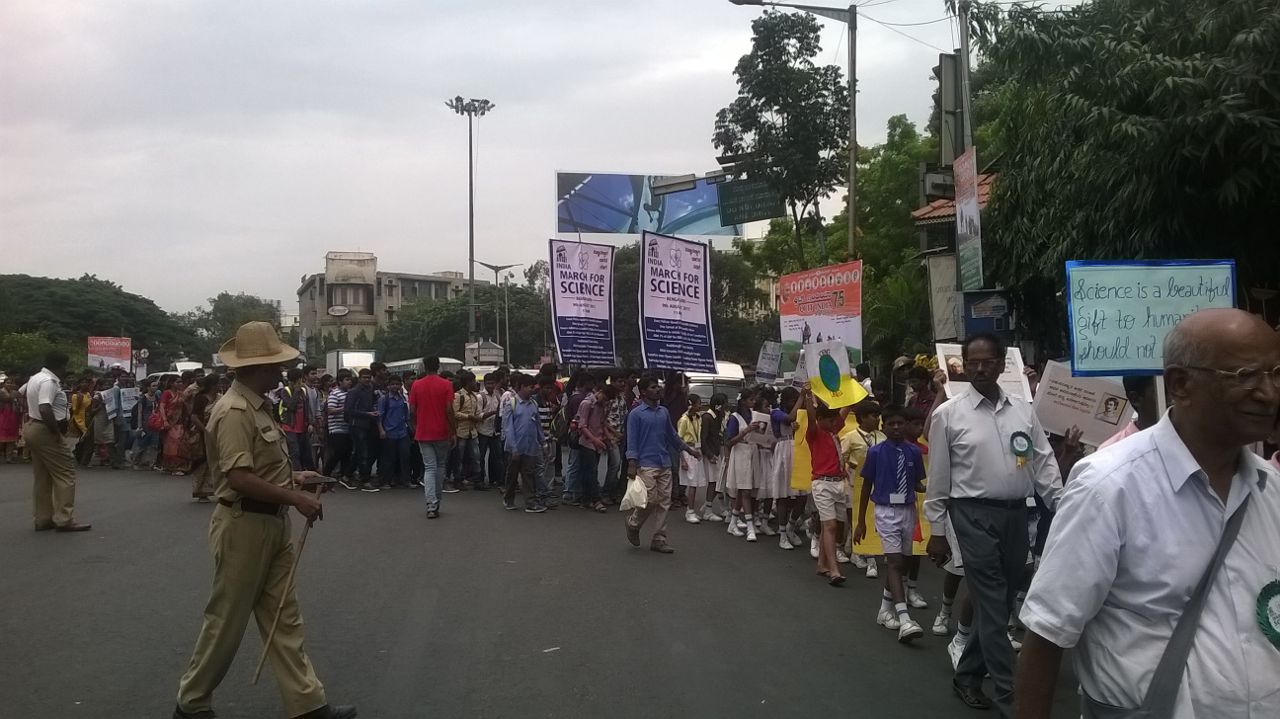 The march was also attended by the eminent scientists Dipankar Chatterji, Ravi Verma Kumar and T.V. Ramachandra, among others. They voiced their opinions against the spread of unscientific ideas in the public sphere, the indiscriminate and ecologically unsustainable growth of our cities, and the desperate need for transparent policymaking guided by scientific data and principles. There was a school student holding a placard that said, ‘Because nature is the open lab for science’. Indeed – and this is why it is important to not tamper with the setup.

Funding for scientific research in India has remained considerably low, hovering around 0.8-0.9%, even as the other major developing countries of Asia have allocated more than 3% percent of their GDP to scientific research. And in spite of this, the government has constantly expected the country’s research output to surpass that of others. The call for allocating at least 3% of GDP – made during the march – should be treated with utmost sincerity by the government. 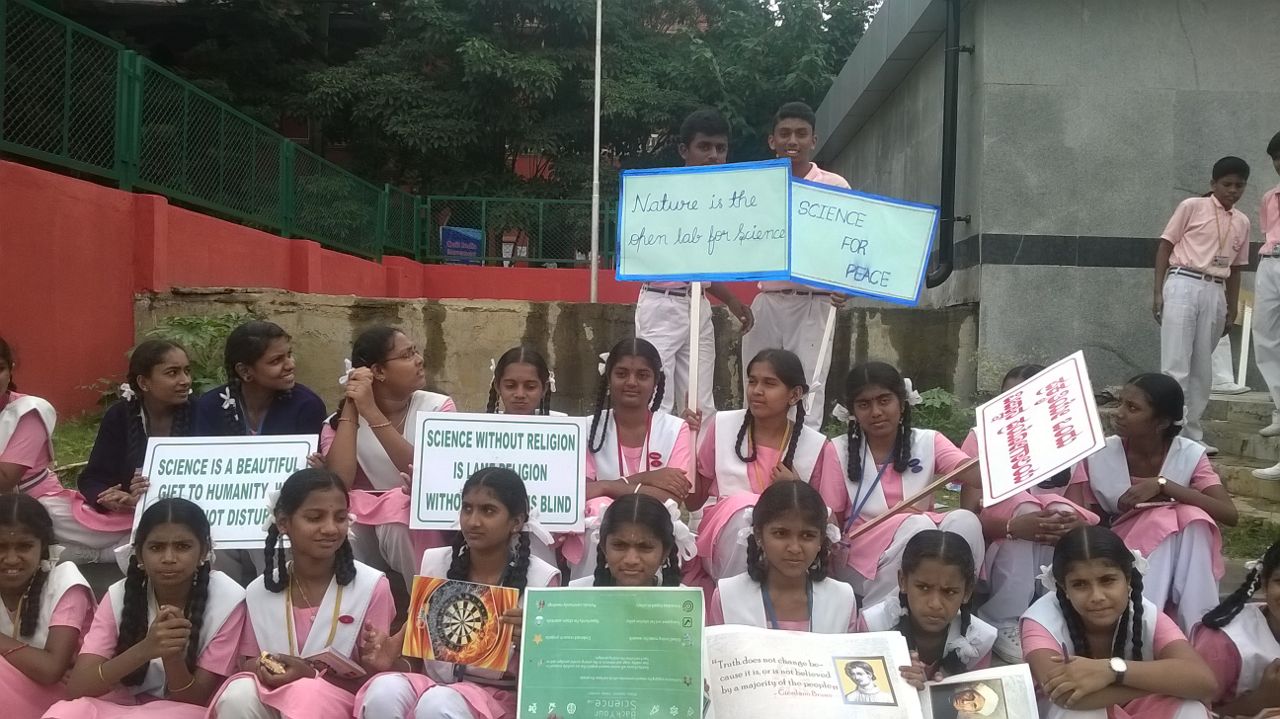 Science, broadly, is the practise of organising material facts to construct systematic and rational explanations for natural phenomena. This is achieved with help from laws and principles derived from the features of the material world. Science is not dogmatic; its explanations and theories are always subject to change based on newer information. More importantly, the output of all scientific investigations ought to be reproducible. However, the political climate at the moment has trapped a disturbing portion of the country’s scientific industry between superstitions on the one hand and pursuits to “validate” religious doctrines on the other. The government’s commitment to finding the beneficial uses of cow urine is setting a dangerous precedent – perhaps unto a dystopia where the line between science and nonsense is erased completely. Absurd claims – that “ancient Indians” flew chariots through space and performed advanced plastic surgery – harm the morale of those working against ‘bad science’.

For example, in June 2016, a research paper on mortality due to air pollution in India written by scientists from the Indian Institute of Tropical Meteorology, Pune, and published in the prestigious Geophysical Research Letters, was rejected by the environment ministry because it was “unscientific” and that it was an “attempt to defame India”. Ironically enough, Prime Minister Narendra Modi had appealed to scientists to apply themselves to solving problems like Delhi’s air pollution – even as his own government remains reluctant to swallow the bitter pills that researchers have offered in remedy. 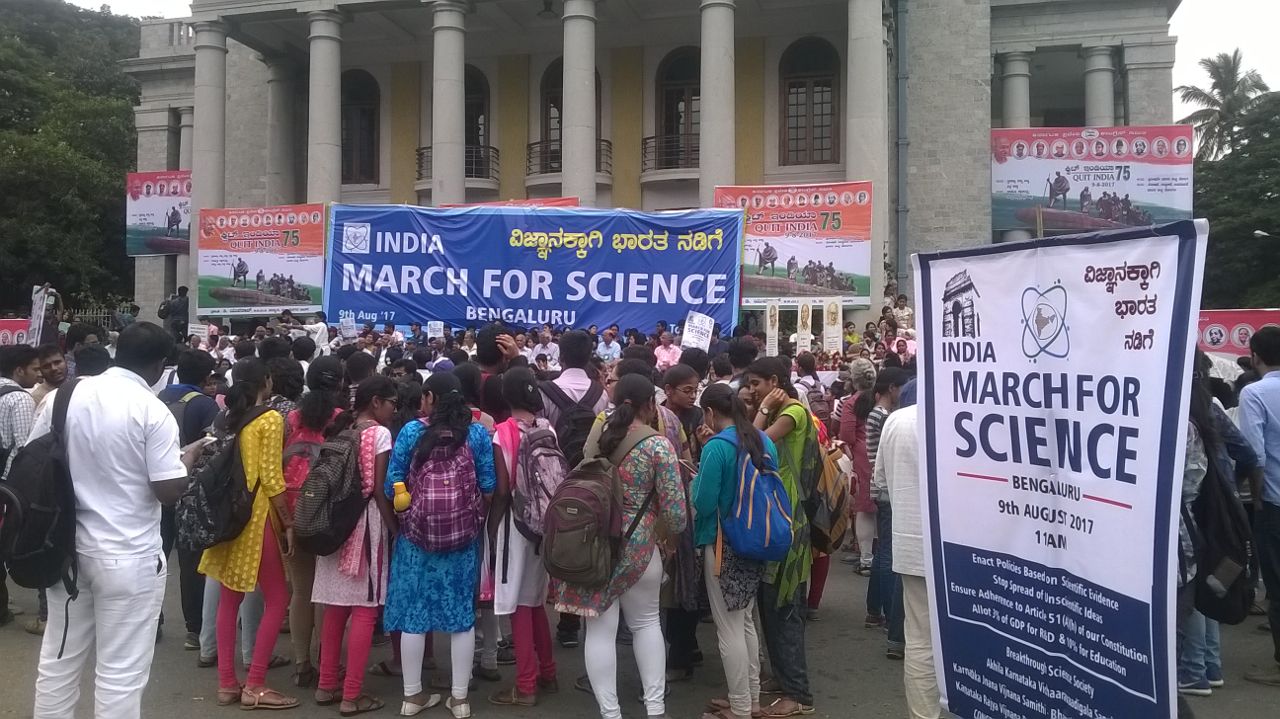 Moreover, apart from funding issues, another thorn in the side of India’s science is its education system. Although it is easier said than done, successful reforms that ensure more people ask ‘why’ before they adorn annulets, ‘blessed’ strings, indulge in horoscopes, numerology, etc. can go a long way in eliminating ignorance. Ignoring the practice and role of science in social spaces will only turn us more dogmatic – not to mention alienate those on the ‘outside’ and make of science a religion. Science is essentially political and that is how we should appreciate it. But the fact that “Earth rotates on its axis” could mutate into a doctrine in the absence of the sort of inquisitiveness and curiosity that Renaissance championed.

The hope of scientists labouring in these circumstances is that the ‘March for Science’ will have been a slap in the face of those attitudes that trivialise modern scientific pursuits with the excuse that “everything is already in the Vedas”. And Bengaluru’s heartening response to the call to fight for science has already inspired many of us to continue with our endeavours to understand the unknown, even if it means a steep climb up. At the same time, we will also hope that a thousand Ramanujans, Subramanyan Chandrasekhars, Meghnad Sahas and J.C. Boses will bloom – and that the march will have flagged off positive change for India.