Indian physicists verified a century-old prediction and then used ASTROSAT to firm up another. The country's own gravitational-wave detector is expected to be ready in seven years. 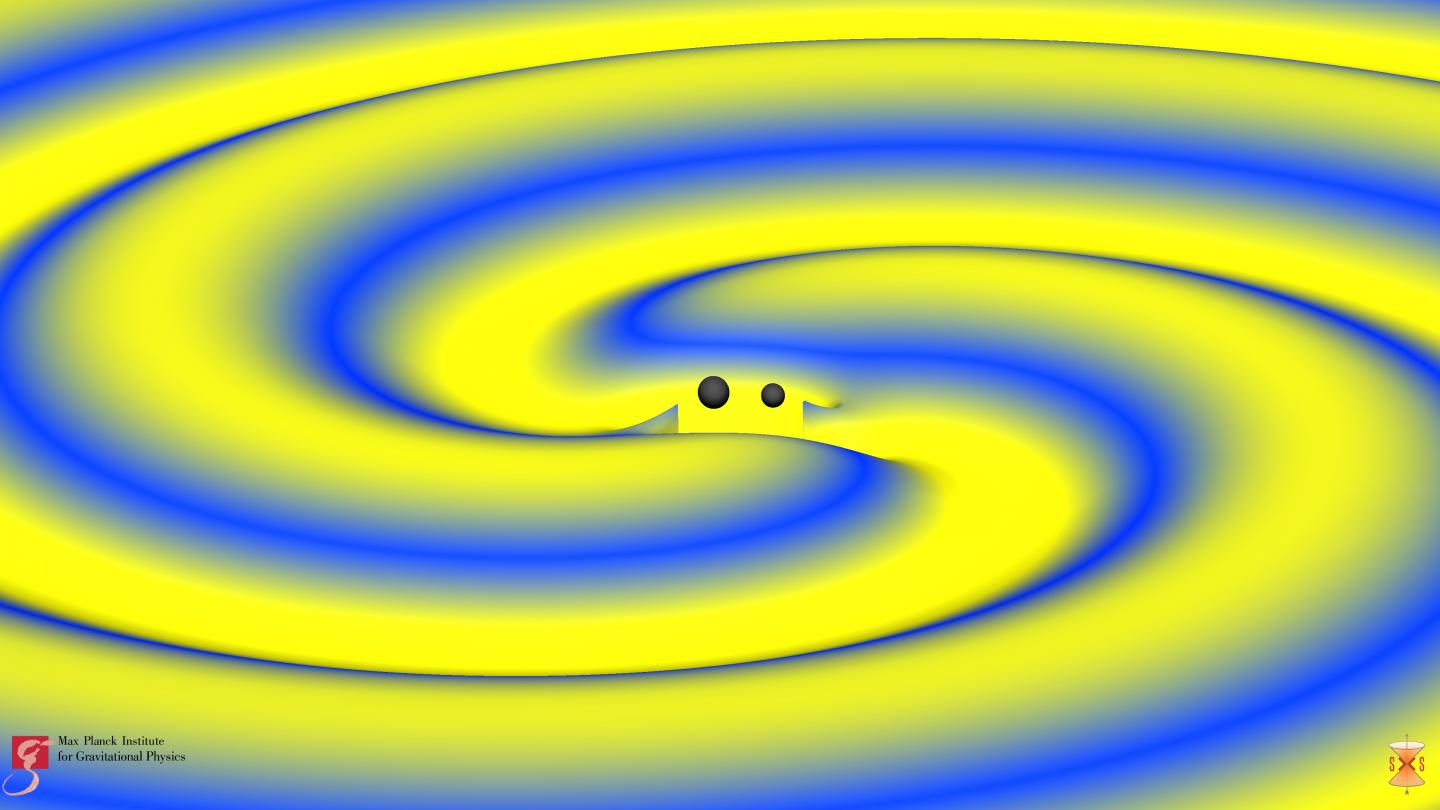 This image shows a numerical simulation of a binary black hole merger with masses and spins consistent with the third and most recent LIGO observation. Caption and credit: University of Maryland

Bengaluru: The first time it happened, we knew we were on the cusp of a new era. The second time it happened, the era was said to have finally begun. Now that it has happened for the third time, gravitational-wave astronomy is firmly on its way.

On June 1, the Laser Interferometer Gravitational-wave Observatories (LIGO) collaboration announced that on January 4, it had detected gravitational waves emanating from the merger of two blackholes. While the actual detection and logging of data is performed by the twin LIGO instruments in Louisiana and Washington, an international collaboration of more than a thousand scientists and engineers analyses them to obtain meaningful results. This includes 40 Indian scientists from 11 institutions, involved primarily in checking if the data fit expectations and in estimating the properties of the blackholes.

But in the third detection, the Indian effort was more pronounced than it has been before. It involved the ASTROSAT space telescope launched by the Indian Space Research Organisation in September 2015, as well as testing a prediction of a century-old theory. And both have further cemented the role and importance of the country’s physics community in this grand enterprise.

According to the LIGO collaboration, two blackholes weighing about 31 and 19 times as much as the Sun were rapidly orbiting each other, coming closer and closer. They eventually merged, about three billion lightyears away, emitting a gale of gravitational energy. This is “the farthest among all the LIGO detections so far,” Parameswaran Ajith, an astrophysicist at the International Centre for Theoretical Sciences, Bengaluru, and a member of the collaboration, confirmed in an interview with The Wire.

The resulting blackhole was 270 km wide and weighed about 49-times as much as the Sun, meaning almost two Suns’ worth of mass had been converted to energy and radiated away. This radiation is in the form of gravitational energy, travelling as ripples through the fabric of spacetime, away from the coalesced blackhole. On the first two occasions, reported in February and November 2016, LIGO detected waves worth three solar masses and one solar mass of energy, respectively.

The waves’ effect on our reality is deceptively simple. They compress and stretch space by very small amounts for very short durations as they pass by. An analogy: the distance we call one metre increases and decreases by minuscule spans as the crests and troughs of the waves pass through. The LIGO instruments use high-precision optics to make these measurements, being sensitive to changes of the order of 1-10,000th the width of a proton.

LIGO consists of two corridors, each 4 km long, joined at a vertex in the shape of an ‘L’. At the end of each corridor is a very shiny mirror. Laser pulses are shot simultaneously towards the mirrors from the vertex. They are reflected and return to reconvene at the vertex, forming an interference pattern in a detector installed just for that. In the absence of gravitational waves, the pulses’ electromagnetic waves cancel each other, yielding no pattern. But when a gravitational wave passes through, one pulse ends up travelling a longer distance than the other. Their electromagnetic waves then fall out of step and register an interference pattern when they reconvene. Scientists begin by working backward from this pattern.

Because there are two detectors, scientists also compare the data from both detectors to divine additional insights into the source. For example, Susan Scott, a physicist at Australian National University, Canberra, said in a statement that the data indicated “that the two black holes could be spinning in opposite directions, which provides a tantalising clue as to how the binary system may have formed.” Another scientist agreed, saying that it might be a hint that the blackholes formed in different places but were forced to pair up as their surroundings got too crowded with stars.

Last year, the LIGO collaboration decided to install a third detector in India to improve sensitivity as well as their ability to zero in on the blackholes’ locations. According to a statement issued by the LIGO-India consortium, “Scientific and engineering teams at IPR Gandhinagar, IUCAA Pune and RRCAT Indore are actively engaged in the pre-construction activities of LIGO-India.” At last check, the instrument was supposed to be installed either near Chittorgarh (Rajasthan) or Marathwada (Maharashtra). 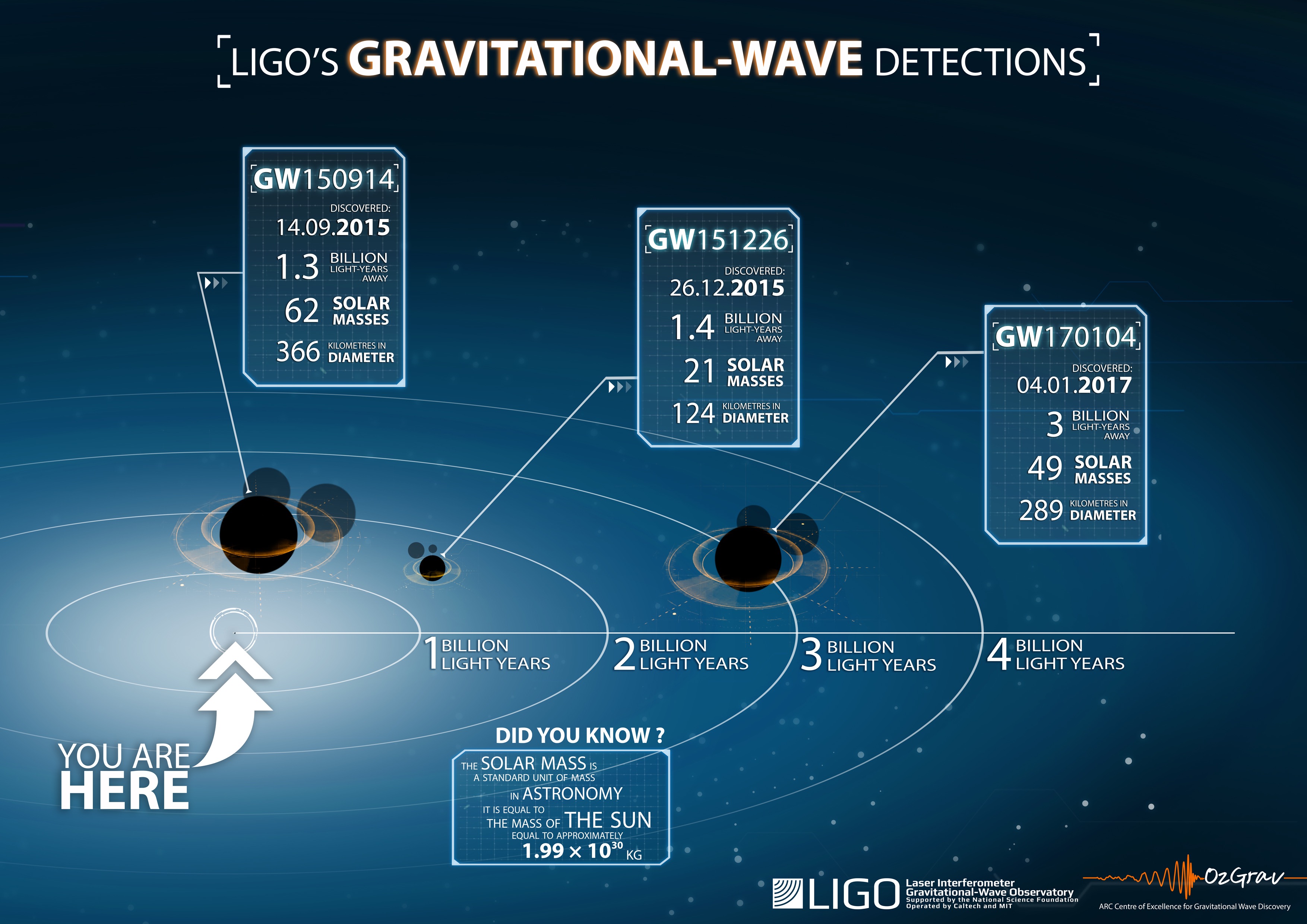 The relative locations of the three blackhole mergers detected by LIGO. The third merger is designated GW170104. Credit: LSC/OzGrav

According to Ajith, the LIGO instruments were able to tune in to the last six orbits of the blackholes before they merged, as well as ‘listen’ to the ringdown phase. This is when the coalesced blackhole settles down into a stable shape. The signal-to-noise ratio was comparable to the second event’s.

However, the second event was also “deeply buried in the noise”, as Karan Jani, a LIGO analyst, had told The Wire at the time, and required a special technique called matched-filtering to fish it out. Given that the signal-to-noise ratio was comparable, was the same technique enlisted this time as well?

No, because the mass made a difference. “This event was much more massive than the second event – it is comparable to the first event, but slightly less massive. For massive blackholes, the observed signals are short and look like a short burst,” Ajith said. “As a result, they can be detected without using matched-filtering. One can look for some short-lived excess power in the data.”

Because of the tremendous energies at play when blackholes collide, these events are natural laboratories in which physicists can test parts of their theories for which no earthly workshop will ever do.

For example, one such theory is Albert Einstein’s general relativity, which first predicted the existence of gravitational waves in 1916. Apart from their other responsibilities, the Indian contingent of the LIGO collaboration used the blackhole merger to verify if the speed of the waves through space depended on their wavelength, a property called dispersion. They did not – proving Einstein right. According to Bala Iyer, the principal investigator of the Indian team in LIGO, this paves the way for the use of “a new class of astrophysical sources to test Einstein’s theory … in extreme conditions.”

For another, scientists were also curious about whether the release of gravitational waves would be accompanied by flashes of light. “According to our current understanding of astrophysics, these binary blackholes will not produce” them, Ajith said. “However, as astronomers, we have to keep an open eye – our current understanding could be wrong!” Subsequently, India’s first and only space telescope was among the many telescopes around the world involved in the effort.

ASTROSAT has a suite of six instruments studying high-energy events in the universe. Among them, the Cadmium-Zinc-Telluride Imager instrument is adept at X-ray and gamma radiation studies and is among the best of its kind. The scientists following up after LIGO’s tip used it to conduct an extensive search for fleeting X-ray flashes in the sky coinciding with the time and location of the merger. Nothing turned up. Then, its operators teamed up with the international GROWTH collaboration of 18 observatories to rule out the merger’s association with another event.

The takeaway was that the current understanding of astronomers was right after all – so far.

But that would not be the end of the story: there is still the matter of answers we don’t have yet, and despite being three detections down, gravitational-wave astronomy has only just begun. For example, as Scott had alluded to earlier, scientists are not sure how binary blackholes form in the first place. And we probably won’t know better until more LIGO observations –  joined by the Indian LIGO in 2024 and assisted by ground- and space-based telescopes – reveal a wider assortment of possibilities.

“We are also anticipating other kinds of sources – such as mergers involving neutron stars, which are amazingly rich and complex,” Ajith elaborated. “Astronomers around the world are preparing to observe electromagnetic flashes from such events.”

“I think the big discoveries are yet to come. Who knows, something completely unexpected might show up in the skies!”