The Life Cycle of Shanti Priya and Her Stars 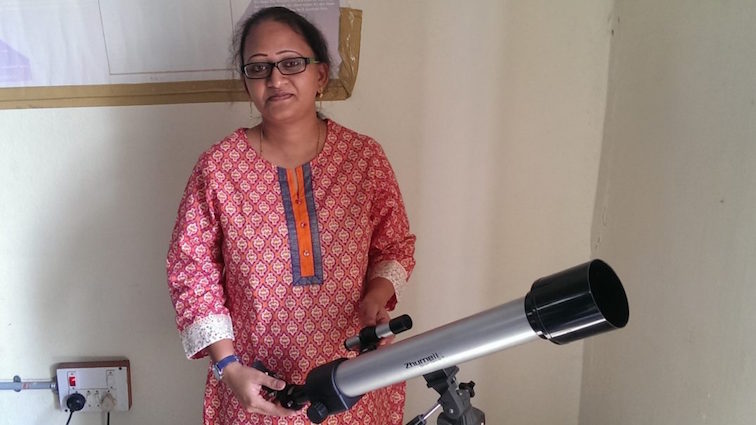 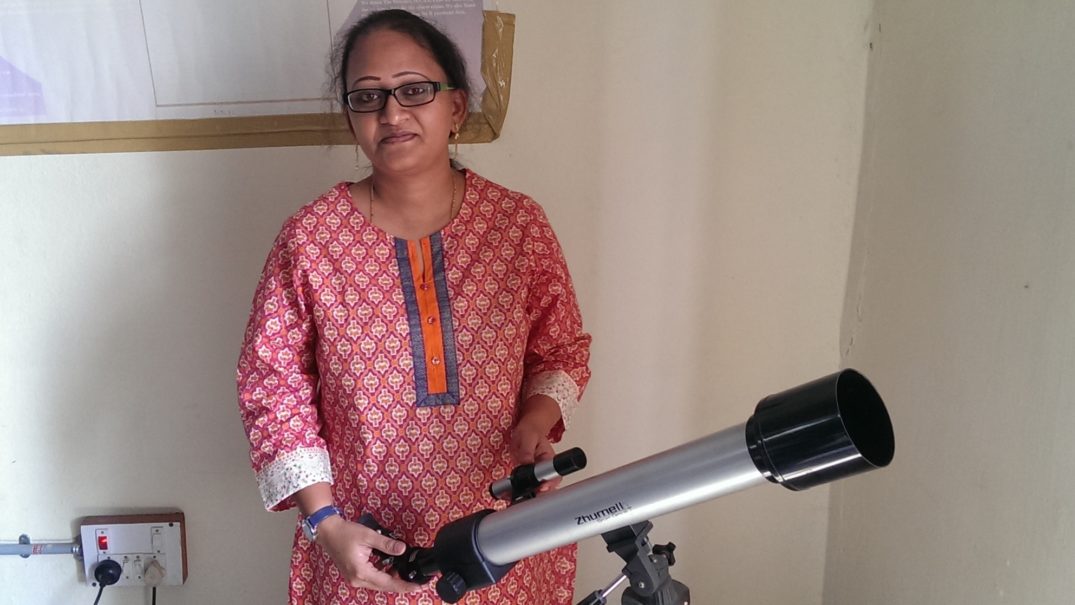 Earlier this year, a newspaper article reported that the renowned astronomy department in Osmania University was in a state of neglect. Despite being one of the few departments in India offering an MSc in the subject, research here is suffering due to the lack of a proper telescope. When I talked to the head of the department 33-year-old D. Shanti Priya, she stated that getting one is on top of her agenda.

“We have an observatory in Rangapur near Hyderabad. For the past two years, I have been trying to raise two to three crores so that we can get a new telescope there. This is the only way our students can get exposed to research. With our smaller telescopes, observations are possible, but to do science from them, we need better ones.”

On the backstage of the night sky

“When we look at the twinkling stars in the night sky, we are actually looking at a lot of things that are going on up there. To know what, we have to do so much science. I came to realise this only when I came here. It’s not as simple as it looks.”

Today, Priya studies the evolution of binary stars. In binary star systems, two stars orbit a common centre of mass. The brighter of the two is the primary star, while the other one is called the secondary star. “Recent studies show that binary stars merge [over time] to become a single, fast-rotating star. My research looks into the life cycles of these stars,” Priya explained.

Recently, Priya and team discovered something significant about a binary star system called ASAS J082243+1927.0 located several light years away in the Perseus constellation. There is a teardrop-shaped region around all binary stars called ‘Roche lobe’. It marks the region inside which the mass is bound to the stars by gravity. In the case of the binary system Priya’s team was studying, the Roche lobe was almost completely ‘filled’, indicating that the stars were on the verge of merging – possibly just about four years away from doing so. 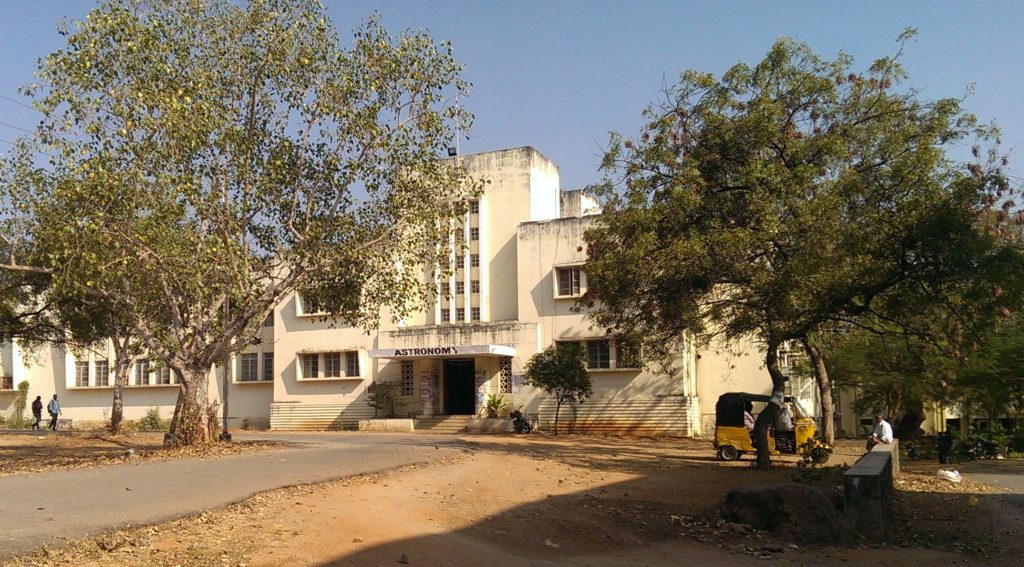 These studies were conducted using large telescopes with apertures of 2m or above in Girawali Observatory near Pune as well as Vainu Bappu Observatory in Tamil Nadu. Charged coupled devices attached to fixed

telescopes like these allow them to cover a larger region of the sky than its normal field of view by allowing the use of techniques like drift scanning.

As binary stars rotate around each other, eclipses take place when one blocks light from the other. During the eclipses, the brightness dips. Optical telescopes collect light from the stars, but for them to tell us anything useful, the observation has to be done continuously for a period of time. “We need to take observations long enough to get one complete rotation,” explained Priya. “In the case of the binary star we studied, the time period of one rotation was 0.2 days so six hours of observation should have been enough – however weather conditions extended this to two to three days.”

Studying binary stars helps astronomers fill up gaps in our understanding of the evolution of stars. “Studying a single star like the Sun is very difficult. So despite existing theories of how a star evolves, to find out if these theories are true or not, we need to study binary stars, Priya affirmed.

Interestingly, there is a theory that lays doubt on the Sun’s single status. Priya informed me about the “Nemesis hypothesis” which is about a star called Nemesis and is alleged to be the Sun’s sibling. There is no proof of Nemesis’s existence yet but it’s popular because the propagators of this theory suspect that Nemesis played a role in the asteroid hit that exterminated Earth’s dinosaurs.

Years back, when Priya enrolled in Osmania University and chose astronomy as the subject to do her MSc in, it would be her first time in a co-educational institution. Her prior education was always in girls-only schools and colleges; her father made sure to drop and pick her up on his cycle every day. So during her MSc it was a bit of a rude shock for her to find that she was suddenly a minority. “I had almost no exposure, so it looked to me like this field was not for women at all,” she said. Travelling by bus on her own, the prospects of doing practical work in the night-time – Priya found all of this very daunting. “It was something strange that was happening to me… all completely new.”

She went on to become a science teacher at a school in Hyderabad where she taught children from class 1 all the way to class 10 for a year. She loved the job very much but her father urged her to quit so that she could pursue a B.Ed. degree. “I literally cried,” admitted Priya, “I did not want to leave the school, my children (students). Even the kids cried,” she added, smiling sadly. “After BEd, a notification for a faculty position at Osmania came up. It was a post that did not require a PhD.”

According to Priya, her appointment in 2007 made her the first woman to be recruited into the department. The next time this happened was in 2013. She realised that to progress in her career, a PhD was crucial. However, enrolling into one at the university proved to be immensely difficult. “The other faculty members with me were all senior professors who had taught me [when I was an MSc student]. They could not accept that a 24 year old has joined as Assistant Professor and now sits alongside them in meetings. That was a problem,” said Priya. 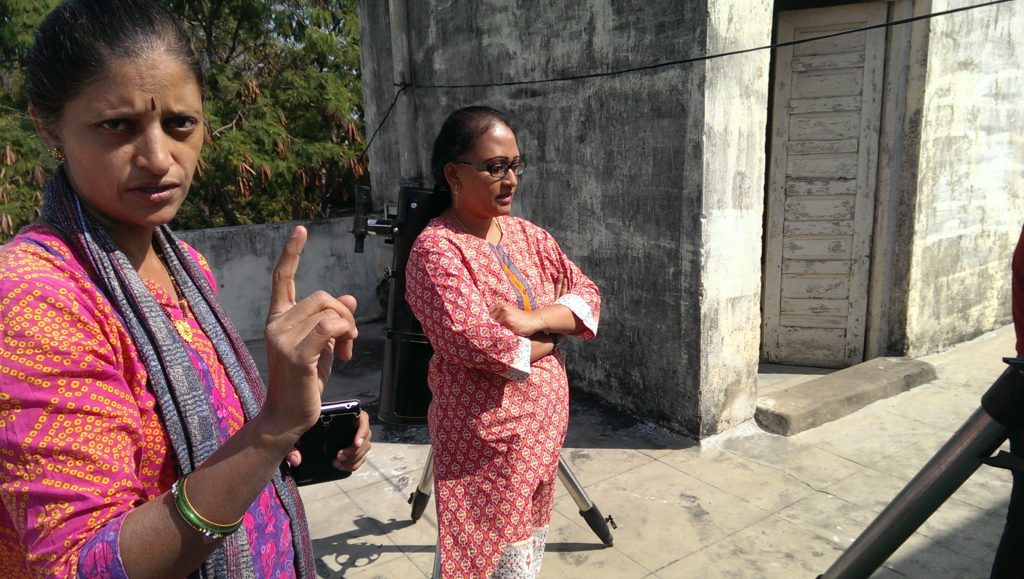 Shanti Priya (right) with Rukmini Jagirdar, another member of the faculty. Credit: The Life of Science

But what made her feel this way? Patiently, Priya elaborated: “At first, I was not given a room. When I asked, they said I’d have to wait until one of the retired professors vacated theirs. Then I was given a room which was full of rats and it was near the common washrooms – there were no separate washrooms for ladies back then. I had to go behind someone for everything. When I asked for a computer system, they said that even they didn’t have one in their time and told me to work with what I have.” Priya sat with students in the computer lab and wondered how her research would go forward without her own computer.”

It took almost two years before Priya was provided with a proper office and a system. “From 2007 to 2009 I was just going around to people, asking them to take me in as a research student. I started my PhD finally only in 2010.” A project with a professor in Indian Institute of Astrophysics (IIAp) in Bengaluru gave her some confidence and this time when she began asking professors once again to take her as a PhD student, one agreed. “He said go for observations, but nobody will come with you – are you ready? I said yes.”

Though she was forced to put up an air of fearlessness, Priya had her apprehensions about field work. She felt better and revised her notions about astronomy ‘not being for women’ when she heard about senior astronomers in IIAp. Meanwhile, she was also quickly gaining confidence in the classroom as a professor at Osmania. “I used to be afraid to go to a class full of hefty male students, some older than me. I was a very thin girl not used to wearing a sari. But I became very strict – I never let them copy or talk in class.” So much that she even garnered some unpopularity. “There was a time when students went against me – they staged a dharna because I was not allowing them to copy in exams. That was a difficult time.” 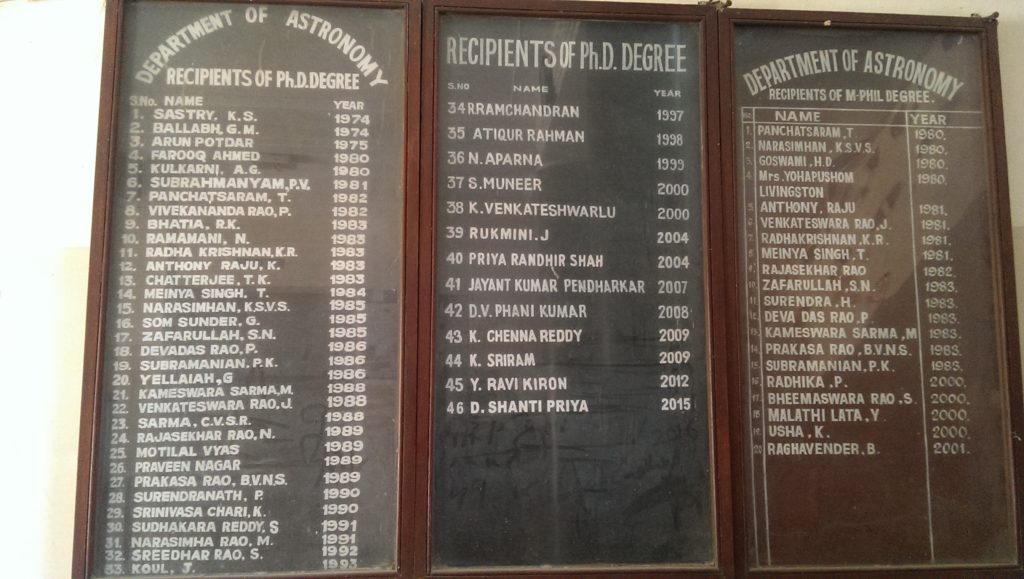 Less than six years into her job, the senior professors remaining in the astronomy department retired, leaving Priya the senior-most in the department. She was appointed as the head of department in 2012. “It’s not easy to head,” said Priya, describing how she spent considerable effort into streamlining processes like ensuring the teaching and non-teaching staff arrived to work on time. And then there are people who detest the idea of working under women administrators, she pointed out. “It’s a daily challenge for me. If I complete a day without issues then that’s a big deal!” she said, smiling.

Considering the amount of administrative work HODs are given, I was curious to know if this seemingly premature rise ever felt to Priya like a burden. “It’s a privilege. If you look at the other heads you’ll see that no one is this young. When I meet them, I feel like a child sitting in between! I feel proud that I could reach here in just six years.”

Top-most on her agenda is a telescope for Osmania University’s observatory. Priya believes that this will get students interested in hands-on astronomy. As things are, most of her students aim for bank jobs or government jobs which have nothing to do with the field.

So what next for this 33-year-old HOD? No longer is she afraid to dream big, Priya told me with a quiet determination: “My aim is to become the first woman vice-chancellor of this university…”

This piece was originally published on The Life of Science. The Wire is happy to support this project by Aashima Dogra and Nandita Jayaraj, who are travelling across India to meet some fantastic women scientists.