Soon after it came online, the Cadmium-Zinc-Telluride Imager was used to study the radiation from a gamma-ray burst in a way NASA's pioneering Swift and FGST satellites couldn't. 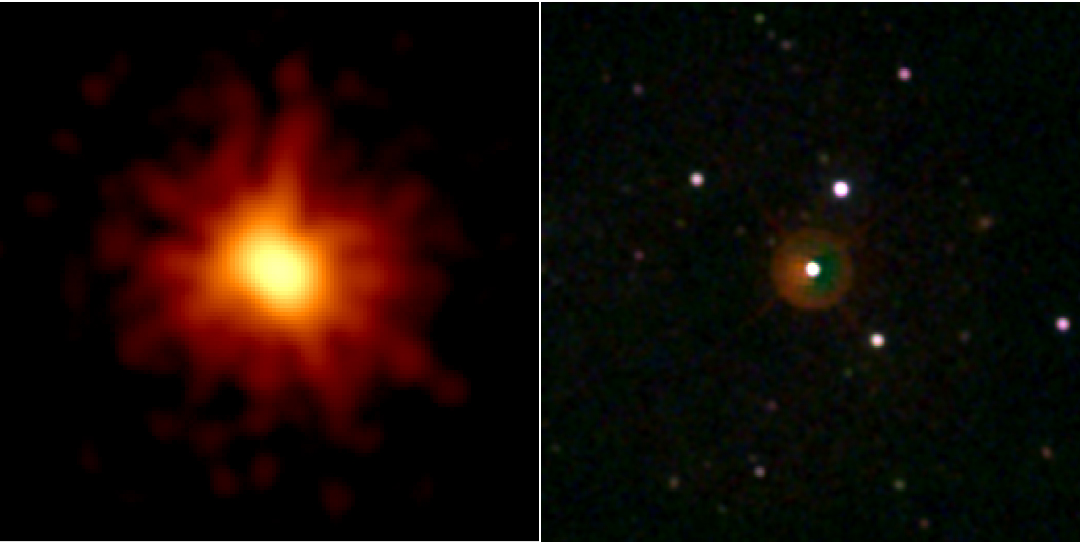 A Swift Observatory image of the luminous afterglow of Gamma Ray Burst GRB 080319B in X-rays (left) and Optical/Ultraviolet (right). Caption and image credit: Wikimedia Commons

On November 17, NASA announced its Swift Observatory in space had recorded its thousandth gamma-ray burst (GRB), an important milestone that indicates how many of these high-energy explosions, sometimes followed by the creation of blackholes, happen in the observable universe and in what ways.

Some five weeks before the announcement, Swift had observed a less symbolically significant GRB called 151006A. Its physical characteristics as logged and analysed by the satellite were quickly available, too, on a University of Leicester webpage.

On the same day as this observation, on October 6, the 50-kg CZTI instrument onboard India’s ASTROSAT space-borne satellite had come online. Like Swift, CZTI is tuned to observe and study high-energy phenomena like GRBs. And like every instrument that has just opened its eyes to the cosmos, ISRO’s scientists were eager to do something with it to check if it worked according to expectations. The Swift-spotted GRB 151006A provided just the opportunity.

CZTI stands for Cadmium-Zinc-Telluride Imager – a compound of these three metals (the third is tellurium) being a known industrial radiation detector. And nothing releases radiation as explosively as a GRB, which have been known to outshine the light of whole galaxies in the few seconds that they last. The ISRO scientists pointed the CZTI at 151006A and recorded observations that they’d later compare against Swift records and see if they matched up. A good match would be validation and a definite sign that the CZTI was working normally.

It was working normally, and how.

NASA has two satellites adept at measuring high-energy radiation coming from different sources in the observable universe – Swift and the Fermi Gamma-ray Space Telescope (FGST). Swift is good at detecting incoming particles that have an energy of up to 150 keV, but not so good at determining the peak energy of hard-spectrum emissions. In astrophysics, spectral hardness is defined as the position of the peak – in power emitted per decade in energy – in the emission spectrum of the GRB. This spectrum is essentially a histogram of the number of particles with some values of a property that strike a detector, so a hard-spectrum emission has a well-defined peak in that histogram. An example:

The plot of argon dense plasma emission is a type of histogram – where the intensity of photons is binned according to the energies at which they were observed. Credit: Wikimedia Commons

FGST, on the other hand, is better equipped to detect emissions higher than 150 keV but not so much at quickly figuring out where in the sky the emissions are coming from. The quickness is important because GRBs typically last for a few seconds, while a subcategory of them lasts for a few thousandths of a second, and then fade into a much duller afterglow of X-rays and other lower-energy emissions. So it’s important to find where in the sky GRBs could be when the brighter flash occurs so that other telescopes around the world can better home in on the afterglow.

This blindspot between Swift and FGST is easily bridged by CZTI, according to ISRO. In fact, per a deceptively innocuous calibration notice put out by the organisation on October 17, CZTI boasts the “best spectral [capabilities] ever” for GRB studies in the 80-250 keV range. This means it can provide better spectral studies of long GRBs (which are usually soft) and better localisation for short, harder GRBs. And together, they make up a strong suite of simultaneous spectral and timing observations of high-energy phenomena for ASTROSAT.

The X-rays and gamma rays emanating from a GRB are simply photons that have a very low wavelength (or, very high frequency). Apart from these characteristics, they also have a property called polarisation, which describes the plane along which the electromagnetic waves of the radiation are vibrating. Polarisation is very important when studying directions along long distances in the universe and how the alignment of intervening matter affects the path of the radiation.

All these properties can be visualised according to the wave nature of radiation.

But in 1922, the British physicist Arthur Compton found that when high-frequency X-rays collided with free electrons, their frequency dropped by a bit (because some energy was transferred to the electrons). This discovery – called Compton scattering and celebrated for proving that electromagnetic radiation could behave like particles – also yielded an equation that let physicists calculate the angle at which the radiation was scattered off based on the change in its frequency. Based on this idea, instruments sensitive to Compton scattering are also able to measure polarisation. This plot shows the number of Compton scattering events logged by CZTI based on observing GRB 151006A; zero-time is the time at which the GRB triggered the attention of Swift. That CZTI was able to generate this plot was evidence that it could make simultaneous observations of timing, spectra and polarisation of high-energy events (especially in X-rays, up to 250 keV), lessening the burden on ISRO to depend on multiple satellites for different observations at different energies.

The ISRO note did clarify that no polarisation measurement was made in this case because about 500 Compton events were logged against the 2,000 needed for the calculation.

But that a GRB had been observed and studied by CZTI was broadcast on the Gamma-ray Coordinates Network:

In addition, the GRB is clearly detected in a light curve created from double events satisfying Compton scattering criteria (Vadawale et al, 2015, A&A, 578, 73). This demonstrates the feasibility of measuring polarisation for brighter GRBs with CZTI.

That CZTI, built by the Tata Institute of Fundamental Research, is a top-notch instrument doesn’t come as a big surprise: most of ASTROSAT’s instruments boast unique capabilities and in some contexts are the best in space. For example, the LAXPC (Large Area X-ray Proportional Counter) instrument as well as NASA’s uniquely designed NuSTAR space telescope both log radiation in the 6-79 keV range coming from around blackholes. While NuSTAR’s spectral abilities are superior, LAXPC’s radiation-collecting area is 10x as much.

On October 7-8, ISRO also used CZTI to observe the famous Cygnus X-1 X-ray source (believed to be a blackhole) in the constellation Cygnus. The observation was made coincidental to NuSTAR’s study of the same object in the same period, allowing ISRO to calibrate CZTI’s functioning in the 0-80 (approx.) keV range and signalling the readiness of five of the six instruments onboard ASTROSAT.

The one remaining instrument, the Ultraviolet Imaging Telescope, will switch on on December 10. And from late December to September 2016, ISRO will use the satellite to make a series of observations before it becomes available to third-parties, and finally to foreign teams in 2018.

Note: This article was updated on November 22, 2015, to include the fact that the Soft X-ray Telescope was online. It earlier stated that it was due to come online only in December.