ISRO Keeps Up Steady Trickle of Photos From Mars Orbiter

The latest images show Tyrrhenus Mons, one of the oldest volcanoes on Mars, and the oddly shaped Pital Creater 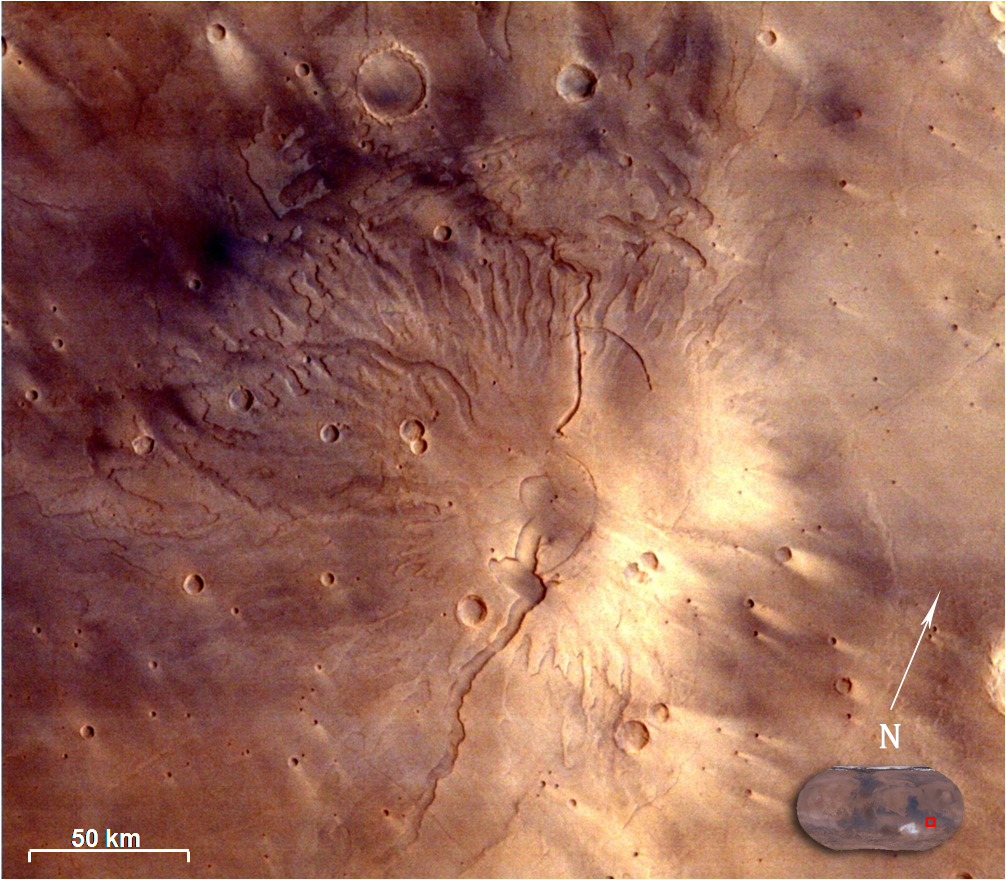 Image of Tyrrhenus Mons in Hesperia Planum region taken by Mars Colour Camera on February 25, 2015, at a spatial resolution of 166 m from an altitude of 3192 km.

On May 22, the Indian Space Research Organization released two new pictures snapped by the Mars Orbiter Mission, currently in orbit around the red planet. They were taken by the Mars Colour Camera on-board the orbiter in February and April, and follow a heftier batch of photos released in the third week of March. On the same day, ISRO was given the Pioneer Award by the International Space Development Conference, organized by the American National Space Society.

One picture shows Tyrrhenus Mons (above), a major volcanic elevation located in the southern hemisphere of Mars. While it isn’t major in the same sense Mount Olympus Mons is – as the tallest mountain in the Solar System, located almost on the opposite side of the planet – Tyrrhenus is significant for its age and formative history. It is one of the oldest volcanoes on Mars, being 3.7-3.9 billion years old, and formed by hot clouds of ash being blown through the surface by molten rock that suddenly encountered steam or a cloud of gas.

The second picture shows the oddly shaped Pital Crater (below), located near the Valles Marineris canyons below the equator. The picture appears to have been taken in April, from a height of 808 km. The Mars Colour Camera that took the picture is among five scientific payloads. It has an instantaneous field of view ranging from 19.5 m to 4 km and a 2048 x 2048 squared-pixel detector. Its imaging capabilities are also complemented by MOM’s highly elliptical orbit around Mars, which takes it 77,000 km from the planet at one point (its closest orbital approach is at 421 km). The great separation allows the Colour Camera and others to take pictures with large fields of view. This image of Mars was taken in October 24, with MOM taking advantage of its elliptical orbit to capture the planet’s breadth. Credit: ISRO

The camera has multiple objectives: to image features on the planet’s surface, to map the geological features surrounding probable sources of methane (which are determined by a companion payload called the Methane Sensor for Mars), to image dust-storms over six months and to map the polar ice caps. As an aside, the camera will also provide important context to the data logged by the four other instruments.

Those instruments are a Methane Sensor for Mars, Exospheric Neutral Composition Analyser (to determine composition of particles), Lyman-Alpha photometer (to measure the relative abundance of hydrogen and deuterium in the upper atmosphere), and Thermal Infrared Imaging Spectrometer (to measure thermal radiation).

On March 24 this year, the orbiter completed its original six months around Mars, and the mission was promptly extended by six months (it is now on the verge of completing its eighth month). On the same day, ISRO released a batch of pictures from the Colour Camera, including stunning snaps of the blue-tinged Valles Marineris.