What the Photon is the Ig Nobel Prize?

The Ig Nobel Prizes break stereotypes, telling students that everyday things have a research question latent in them, and then provide a lifetime pass to think crazy. 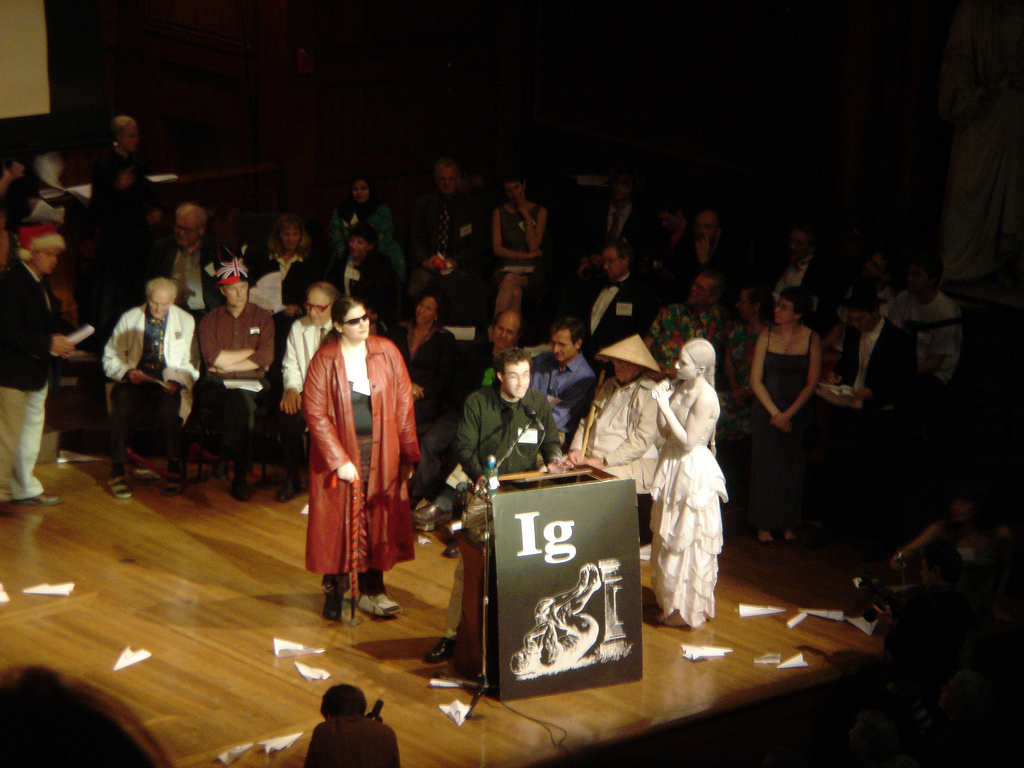 The Ig Nobel Prize ceremony in 2006. Paper planes are visible on the stage. Credit: jdlouhy/Flickr, CC BY 2.0

Picture this: An alarm clock rings. As is the universal wont, you try to snooze/stop the shrieking contraption from hell, but wonder of wonders, it runs away from you. You promptly do what any self-respecting individual does when confronted with the situation: you cuss at the blasted thing, and run after it in a bid to stop it from shrieking any further. The device finally captured, you shut it off and look at it with an expression that can only be described as a weird mix of bewilderment and rage. But in all this din, there’s one good thing that has happened: you have gotten yourself out of the bed. And now that you are up, you think to yourself you might as well jump into the shower, and get set to begin the day.

How would you like to possess one such alarm clock? Well, the thing exists, and the series of events described as it rings are more or less correct.

Now, answer these: What is the surface area of an Indian elephant? What is the amount of friction between the sole of your shoe and a banana peel as you step on it? What happens in the brains of people who see the face of Jesus in a piece of toast?

How did you fare? No, wait, that’s the incorrect question. Why would one even know the answers to these questions? The answer, it turns out, is the reason why we put a rover on Mars and the reason why we touch a park bench that has a signboard declaring “Freshly painted, don’t touch!”

Those questions above and many more of their kind caught the fancy of several groups of researchers, and they doggedly went on to find their answers. A job well done, they thought, and all was well. But then some people thought that was exceedingly more than well and they gave them an award for it. The award is the Ig Nobel Prize.

Not to be confused with the Nobel Prizes, the Ig Nobel Prizes were instituted by the science humour magazine Annals of Improbable Research. These prizes have been given away every year since 1991 to honour achievements that “make people laugh, and then think”. The prizes celebrate the unusual in the scientific imagination in 10 disciplines, one of which is ‘interdisciplinary’.

The awards are presented by Nobel laureates at a grand, rather quirky, ceremony in the Sanders Theatre at Harvard University. The awardees have exactly 60 seconds to present their acceptance speech. A forbidding eight-year-old girl appointed for the purpose makes her displeasure known when the 60-second rule is violated. She simply gets on the stage and coos: “Please stop, I am bored.” The trick works. Watched by a thousand-odd spectators in the theatre, who are also given the chance to shoot paper aeroplanes on to the stage, the event is telecast live on the internet. This year’s Ig Nobel Prizes will be announced on September 22.

The Ig Nobels are a powerful tool in the storytelling of science. Your story losing steam and faltering and stumbling? No problem! Just nonchalantly segue to an Ig Nobel research question: How do reindeer react to seeing humans disguised as polar bears? Chances are you now have a better story because the all-important reindeer are smack-dab at the centre of the universe, as your previous story blissfully sorties the unimaginable expanses of an unheard of multiverse. Your readers are happy. And thankful.

The Ig Nobels enthuse people to science, technology and medicine. While on medicine, here’s an Ig Nobel winning piece of research: a scientist from Papua New Guinea investigated injuries due to falling coconuts. In his paper, he describes four patients with head injuries resulting from this. The last two sentences of his paper’s abstract read: “Two required craniotomy. Two others died instantly in the village after being struck by dropping nuts.”

No, the Ig Nobels do not ridicule science. On the contrary, they make it evident that science is fun. The Ig Nobels break stereotypes. They enable students to realise that a scientist isn’t a weird looking, bespectacled person with unkempt hair attired in a lab coat embellished with a pocket protector. These are the awards that tell students that everyday things have a research question latent in them. They give students the lifetime pass to think crazy, and come up with zany ideas. And then use the scientific method to whittle and sieve the idea through.

Back in the classroom, as we discuss another Ig Nobel story, I ask my students what they think of the prizes. All love them and some boldly claim that they want an Ig Nobel as well. I am heartened. But for a split-second I wonder if I am falling short in making my students think big. But then the thought disappears, and I know the students will be good. They are after all the postmodern science students that want more. They want the Ig Nobel. And I can live knowing that, very happily so.