This is the oldest and most complete fossil of an ichthyosaur to have been found in India, and it may shed new light on the evolution and range of these ancient reptiles. A field photograph of an excavated ichthyosaur skeleton in the Katrol Formation near Lodai village in Gujarat's Kutch. Caption and photo: PLOS 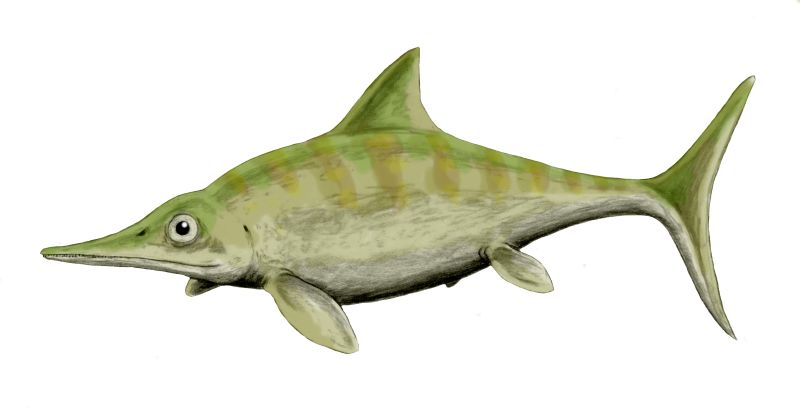 When dinosaurs roamed on land, and the archaeopteryx flew in the skies, a large, fish-like marine reptile, the ichthyosaur, swam in the waters off the coast of ancient India. We now know this because an almost complete fossil of the ancient animal was recently found in the Kutch (or Kachchh) region of Gujarat. This is the oldest and most complete fossil of an ichthyosaur to have been found in India, and it may shed new light on the evolution and range of these ancient reptiles.

“The find is very interesting because there is a bias,” Valentin Fischer, a palaeontologist at the University of Liege, Belgium, told The Wire. “Most of the data we have on diversity on Jurassic ichthyosaurs comes from a limited series of localities: western Europe and western Russia mainly, then North and South America. We really need the data from India and Africa to better understand the evolution of these animals.” Fischer was not part of the find.

There are only a handful of marine reptiles today. Saltwater crocodiles, sea turtles and sea snakes come to mind. These animals live and hunt in the water but need to surface to breathe. About 250 million years ago, there were plenty of them in Earth’s warm and humid oceans, and cruised the waters of the globe. It was in these conditions that the ichthyosaur first appeared in the form of an eel-like creature. Over the next 40 million years, it evolved to adapt itself perfectly to living in the ocean, with a streamlined body and flippers almost like those of a dolphin, swimming fast and deep.

The first notable ichthyosaur fossil discovery was made in the early 19th century, around the limestone cliffs of Dorset, UK, by Mary Anning. Since then, several fossils of the reptile have been found in Germany, Russia, Norway and North America. These modern nations were part of the northern landmass called Laurasia during the Jurassic period, about 200 million years ago. A few fossils have been found in South America as well, and younger fragments from Australia and Madagascar. These latter regions were then part of the southern continent, Gondwanaland, separated from Laurasia by an ocean called Tethys. India was then part of Gondwanaland; it would later separate and collide with the Eurasian landmass 40-50 million years ago. 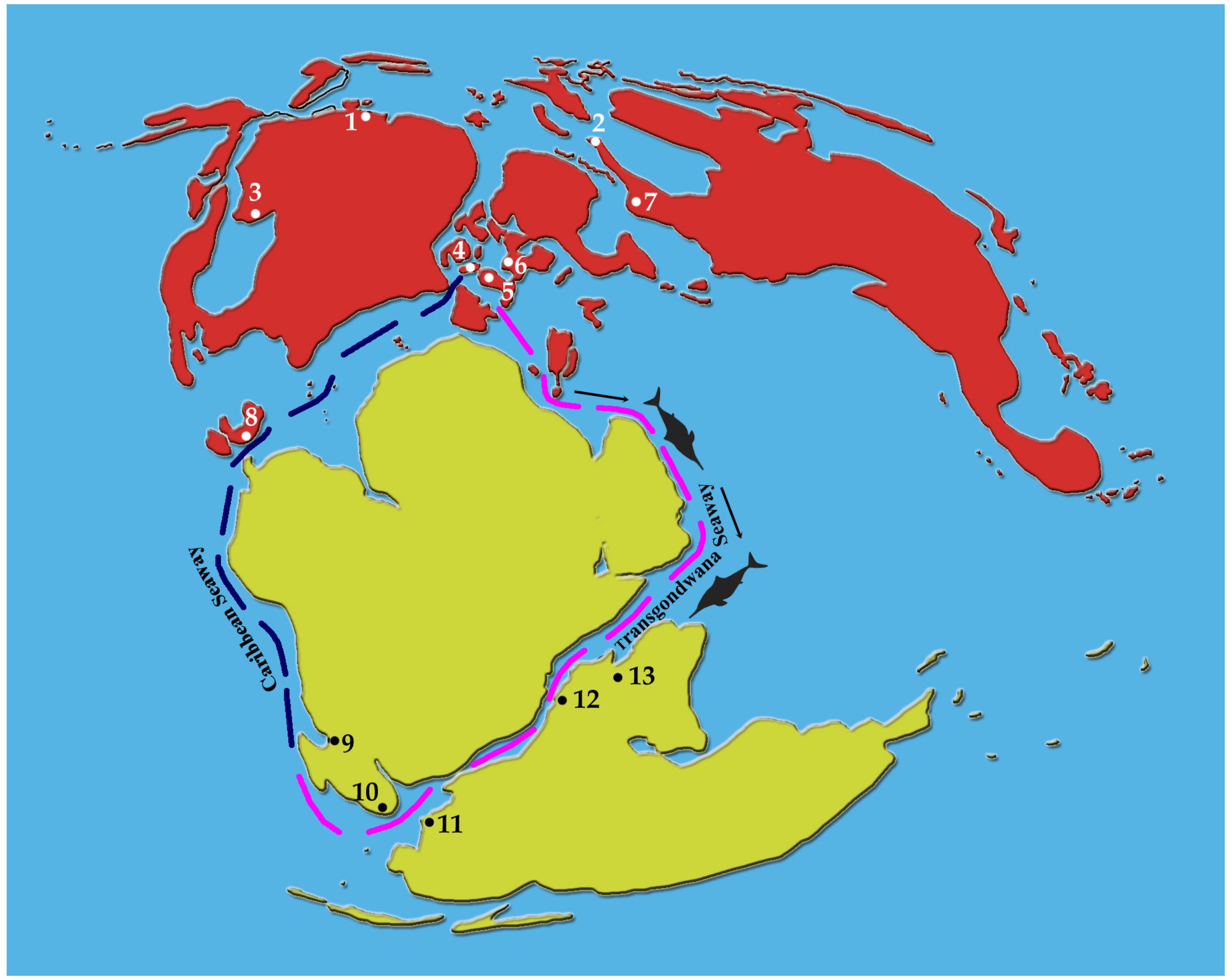 The world in the late Jurassic period. The part known as India today is marked at no. 13. The route that the ichthyosaur could have taken from Laurasia to Gondwanaland is shown in pink. Source: PLOS

“The present find from the Kachchh is 152 million years old, which is later Jurassic in geological terms, and it is a nearly complete skeleton,” Guntupalli Prasad, a palaeontologist at the University of Delhi and lead author of the study describing their discovery, said to The Wire. The Kutch, a seasonally dry and arid area today, was at that time under the ocean. And although this area is known for its ancient fossils, vertebrate fossils are rare.

In January 2016, researchers digging near Lodai village in Gujarat had been looking for invertebrate fossils when they found a bone that looked it belonged to a dinosaur; dinosaurs are vertebrates. This was unusual because the area was thought not to harbour fossils of vertebrate animals. 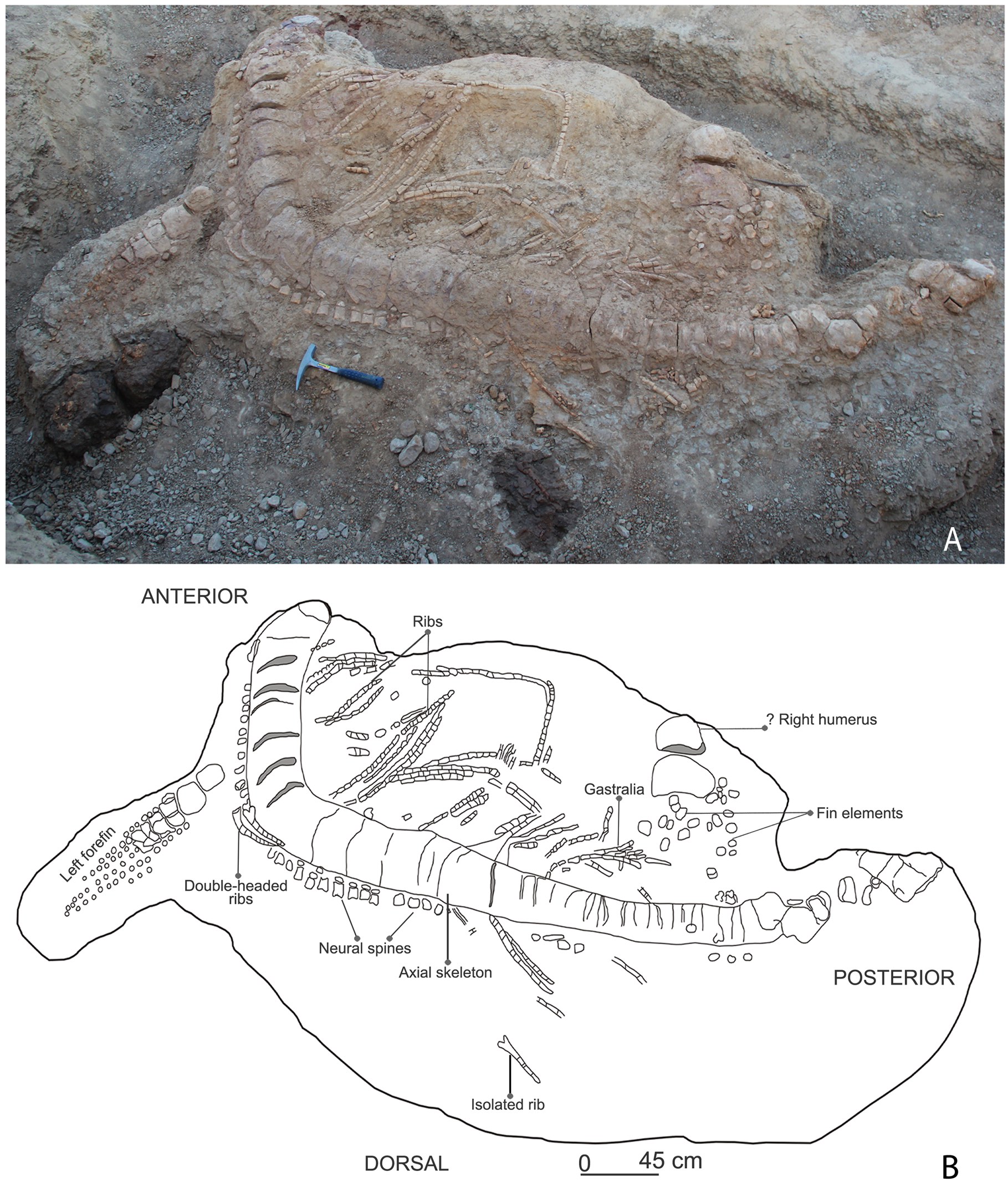 Field photograph (A) accompanied with a sketch (B) of the excavated ichthyosaur skeleton in the Katrol Formation near Lodai village. Caption and source: PLOS

So Prasad and his colleagues dug for about 10 days and gradually unearthed the ribs, forefin, tail, a part of the snout and finally the skull – all in that order, as if the ichthyosaur to which these bones belonged to had been trapped while diving down. In all, only a part of the skull, the end of the tail and the hind fins were missing. Although ichthyosaur fossils have been found before in India in the Kaveri basin, they were only in the form of isolated teeth and a few backbone fragments. The new find, on the other hand, is remarkable in terms of its completeness, even showing the curve of the backbone and the near-perfect placement of the forefins.

The team identified the fossil as an ichthyosaur’s because of certain distinguishing features, according to Prasad. The presence of fins instead of feet was key, and the arrangement of its fingers distinguished it from the other marine reptiles of its times. Another key feature was the presence of double-headed ribs – ribs that are attached to the backbone at two points. The total length of the assemblage skeleton was about 3.6 metres, which meant the adult ichthyosaur was large, about 5.5 metres long (when the missing parts were accounted for).

The new fossil has been identified as belonging to the family of opthalmosaurus, or “eye-lizard,” because of their extremely large eyes – the biggest of any known vertebrate. This enabled better vision that enabled these beasts dive deeper in ocean waters to hunt. In fact, this is one reason they thrived in the oceans. Another was their ability to give birth to live young ones instead of laying eggs as modern marine reptiles do. Scientists were able to attest to this feature using fossils discovered in China in 2014: they showed a mother ichthyosaur with an embryo inside her and one stuck in her pelvis.

Marine reptiles are known to have thrived between about 250 and 90 million years ago. But there are gaps in the knowledge of their ranges and how they evolved in different locations, mainly because fossil records have been concentrated in the northern hemisphere; there have been few findings in the south. “Indian localities provide access to the ichthyosaurs living in the southern margin of the Tethys ocean and, thus, of their shape, diversity, and palaeogeography. These findings provide the best specimens so far from this region and help detail the possible palaeogeographic routes these animals took during the Jurassic,” Fischer said.

Since the fossil from Kutch is closely related to fossils found in the UK, Prasad suggested that ichthyosaurs from the southern oceans, off the coasts of South America, western India and Madagascar, could have swum up north via the Tethys ocean. However, “this is a hypothesis, this needs to be tested,” he added.

Additionally, the well-preserved teeth of the ichthyosaur provide some clues about its diet. They show wear marks characteristic of eating hard food. According to Prasad, this suggests that the ichthyosaur was a top-tier predator in the oceans and fed on hard-shelled molluscs, such as the extinct ammonites and belemnites whose remains were found along with the ichthyosaur fossil. Or even small marine reptiles.

The real work has only begun. Prasad said that the next step is to prepare the skeleton for further study by removing the iron deposits on it and freeing it from its rock matrix. This will allow its species category to be identified with more precision. “The new fossil has demonstrated the potential of the Kutch Jurassic rocks for the discovery of marine reptiles,” he said.

He and his team also want to systematically explore the region further, studying the various geological formations in search of marine reptiles and other vertebrate fossils. He wondered if this was the only ichthyosaur that wandered near India – or if there could be many of its kind around the subcontinent. “That, of course, we have to explore further.”