What's the Falcon Heavy? Why did it launch a car into space? Who was at the wheel? Isn't the car space junk? Was there a point to all this beyond vanity?

An animation of the Falcon Heavy lifting off. Credit: SpaceX 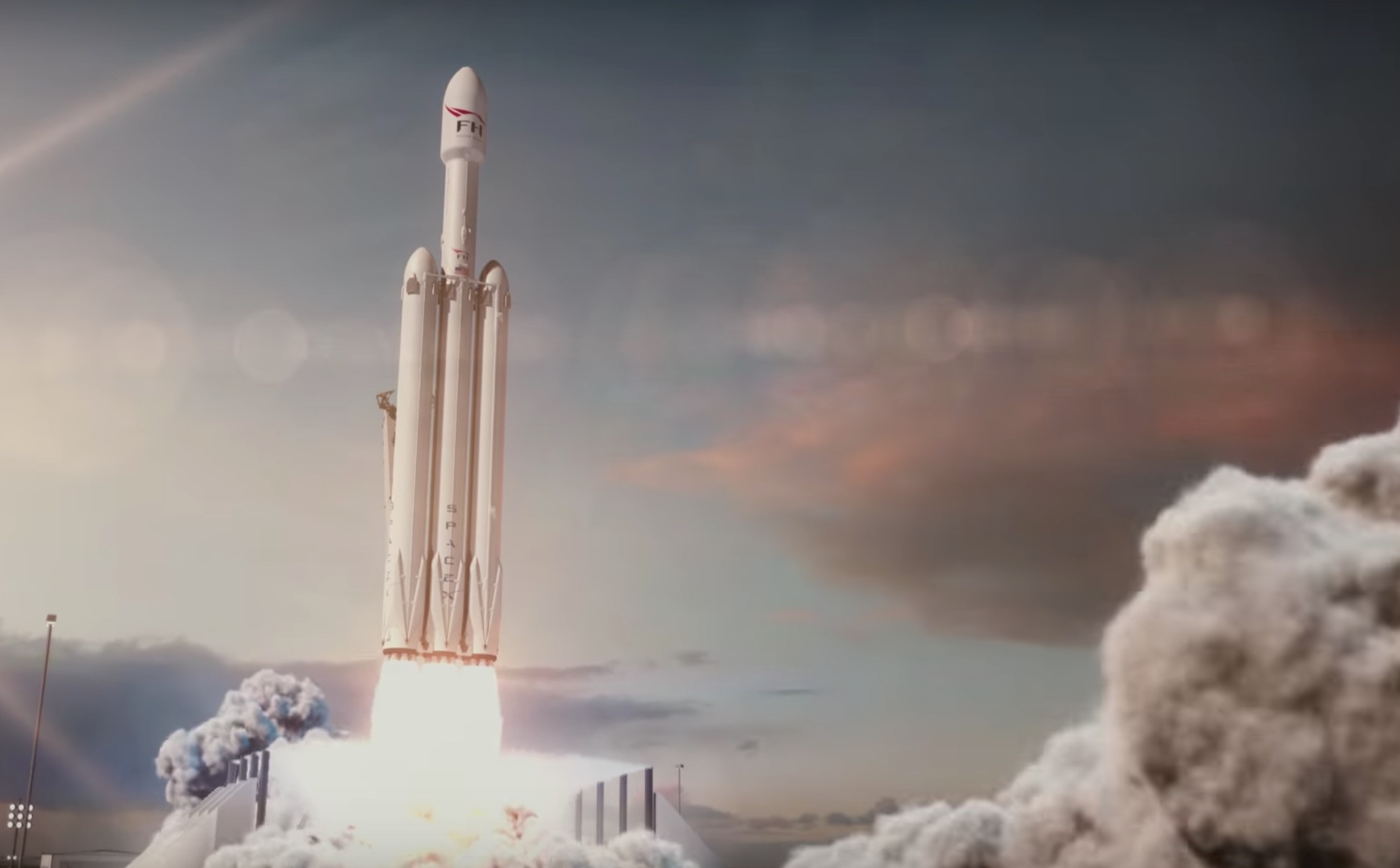 An animation of the Falcon Heavy lifting off. Credit: SpaceX

Elon Musk has stepped closer to his vision of settling humans on Mars within the next two decades. In the early hours of February 7 (IST), SpaceX launched its first Falcon Heavy rocket, the largest and most powerful functional rocket in the world today, from Pad 39A at Cape Canaveral, Florida. After the launch, both first-stage boosters returned safely to ground.

In its maiden voyage, the Heavy carried a model of the Tesla Roadster, with a mannequin at the wheel decked up in a new SpaceX spacesuit. Here’s an FAQ to guide you through some of the more trickier details.

What is the Falcon Heavy?

Technically, the Falcon Heavy is three Falcon 9 rockets. Each Falcon 9 has nine engines. The Falcon Heavy has one core rocket – a Falcon 9 – flanked by two more Falcon 9s to boost its lift. According to SpaceX, the Heavy can lift 64,000 kg into low-Earth orbit (at most ~2,000 km high). This capacity beats the second most powerful rocket, the Delta IV Heavy, by 36,000 kg, but the real kicker here is that the Falcon can do this for one-third the cost.

Apart from being the precursor to larger rockets (discussed below), the Heavy’s near-future missions include launching large American military satellites.

A big part of making space travel sustainable is reusability. SpaceX’s hallmark has been to bring spent rocket stages back to ground and it tasted almost complete success again yesterday: two of the three stages that were expected to return safely did so. The third crashed at about 480 km/h into the ocean and couldn’t be recovered.

Why a Tesla Roadster? Why not a satellite?

Musk could have sent anything up in the rocket but he chose to pick a car his company – Tesla – manufactures because it is disposable. The Falcon Heavy flew for the first time last night and Musk mentioned that since he wasn’t sure it would actually take off, he didn’t want to have something irreplaceable on board. But then he also has mentioned that any other payload would’ve been “boring”. While his wealth-signalling action has attracted vocal criticism for being too flashy, the endeavour could help help Tesla stave off concerns over its production delays.

Who was at the wheel?

Its name is Starman and it is wearing a SpaceX spacesuit. The mannequin was named for David Bowie’s hit single of the same name, and Bowie’s song ‘Space oddity’ blasted through the car’s speakers as it went up.

Earlier, Musk had posted pictures of the spacesuit, designed for future astronauts to wear onboard SpaceX Dragon capsules en route to the International Space Station. Starman’s kit itself was not a prototype but the real thing, the Heavy launch an opportunity to test it.

Astronaut spacesuit next to Crew Dragon

The Roadster had three cameras providing  a livestream of visuals for almost two hours.

View from SpaceX Launch Control. Apparently, there is a car in orbit around Earth. pic.twitter.com/QljN2VnL1O

Where is the car going?

The official simulation of the car’s trajectory shows the vehicle going towards Mars, but it isn’t. Going towards the planet is a risky proposition: SpaceX could end up violating planetary protection guidelines if the car comes in contact with the Martian atmosphere or crashes down, running the risk of Earth microbes contaminating the planet.

The plan was to get the car into an elliptical orbit around the Sun, moving between the heliocentric orbits of Earth and Mars. This ellipse is part of the Hohmann transfer orbit, a path taken by spacecrafts going from Earth to Mars. Only here, the craft won’t orbit or land on Mars but take trips around the Sun for millions of years (if it lasts that long). 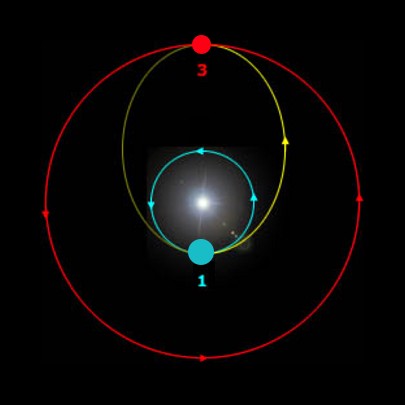 An illustration of the Hohmann transfer orbit. The Roadster was supposed to orbit along the yellow path. Credit: Rlandmann/Wikimedia Commons, CC BY-SA 3.0

Update (February 8, 2018): SpaceX has admitted to sources that Musk’s tweet was incorrect. The Heavy’s third burn took it just beyond Mars orbit, as expected. The Roadster itself will go beyond the path Mars travels in July 2018, continue until November, and turn back to go around the Sun. On the other side, it will reach up to the distance of Earth’s orbit before turning back again. The orbital period has been estimated to be 1.56 years.

Space junk, or space debris, constitutes all the flotsam of non-functioning satellites and rockets we’ve sent up that are orbiting around Earth for no reason at all. This is a type of pollution and is rightfully gaining a lot of attention. Orbiting space debris can often interfere with observational astronomy: imagine peering in through a telescope to capture the transit of a planet around a star far away, only for a hunk of trash to obstruct your view. These pieces also pose a risk to other satellites we launch.

The most recent controversy on the subject was caused by Rocket Labs’ ‘Humanity Star’ project. The New-Zealand-based private company sent up a highly reflective spheroid last month meant to encourage people to look up whenever it passes. This orbiting structure serves no purpose apart from its reflectivity and will burn up in Earth’s atmosphere in nine months or so. Several organisations like NASA have made it mandatory for satellites going up to a mechanism to end its life, called “deorbiting”, in a peaceful and non-threatening way. However, with the Roadster, the path it takes will not really be impeding future projects because it’s millions of kilometres away.

Then again, it’s possible that the Roadster could potentially come close to Mars or Earth, be sucked in and burn up or crash, or be kicked out of orbit, flung out until it is pulled in by Jupiter or Neptune. There is no way to tell at the moment.

Was there a point to all of this beyond vanity?

This mission was a technology demonstrator. According to Musk, actually going to Mars will require what SpaceX is calling the the Big [effing] Rocket (BFR).

Last night’s Falcon Heavy launch was the first step in realising the BFR. The part of the rocket carrying the car passed through Earth’s Van Allen radiation belts, a donut shaped region of high-energy radiation around Earth that protects us from particles streaming in from the Sun. However, these belts can be deadly for space travel, frying electric components, battering structures and potentially killing humans. We did pass through sparse regions of these belts when we wanted to get to the Moon, but we need to understand more about how they work and the damage they can do before we send more humans farther away from Earth. The second stage of the Falcon Heavy coasted through these belts for six hours.