This Frog's Poison Is Among the Deadliest in Nature – So Why Doesn't It Kill the Frog Itself?

Learning how poison frogs evolved to resist their toxins without sacrificing normal functions could help researchers design a new generation of painkillers as well antidotes for smokers and drug users who want to kick their habits. 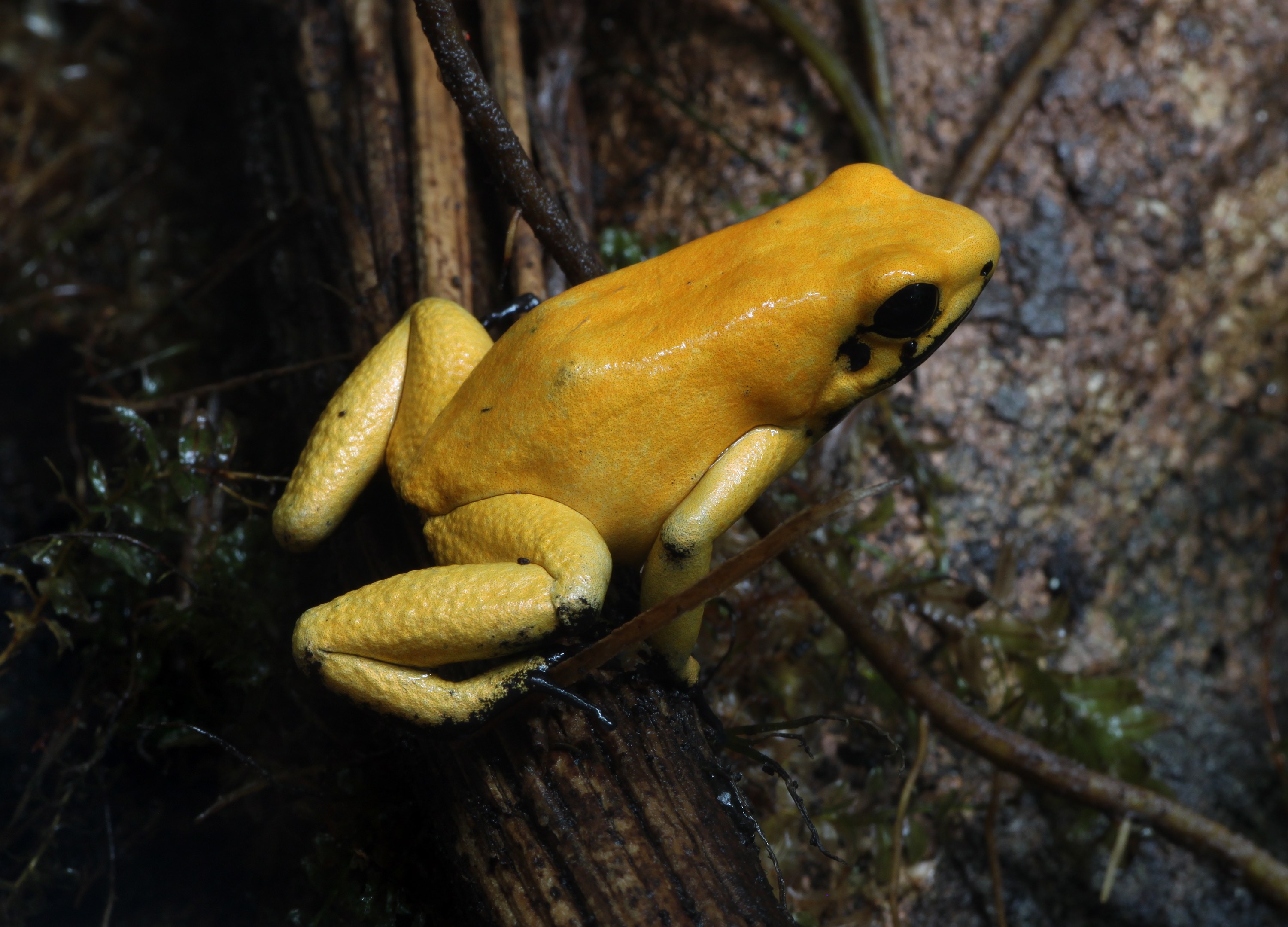 The blowgun is the weapon of choice among the indigenous hunters of Central America. They blow a short powerful burst of air through the skyward-pointing long hollow wooden tubes, shooting an arrow at birds and monkeys. Their prey seem to tumble out of treetops instantaneously because of the quick work of poisons. The sharpened palm rib darts are coated with some of the most potent poisons in the natural world: the secretions of poison dart frogs.

These tiny amphibians come in bright colours such as blue, orange, yellow and red, which didn’t evolve to entice children but to warn predators of their lethality. The most poisonous of this group of amphibians is the golden poison frog (Phyllobates terribilis), found only in the humid forests of Colombia. When in distress, it sweats a concoction of alkaloids, the most virulent one being batrachotoxin (Greek for frog toxin) that blocks transmission of nerve signals. This causes convulsions leading to death by respiratory paralysis and/or heart failure. Each frog has about one mg of batrachotoxin, enough to kill more than 20,000 mice or 15 grown men. It’s more toxic than curare and a thousand times deadlier than cyanide.

Not all species of poison frogs are toxic; only about a hundred species are. This minority doesn’t synthesise its own deadly alkaloids but absorbs them from its insect prey and stock them in glands embedded in its skin. When a predator ignores the warning colours and grabs the amphibians, the pressure releases toxins from the glands. The combination of their bitter taste and unpleasant effect forces the animal to drop the frogs. The amphibians themselves aren’t affected by the toxins. Two studies examine how they developed resistance to their chemical weapons.

What are the circumstances when the frogs could be poisoned? Sho-Ya Wang of the State University of New York says when predators bite them, alkaloids squeezed out of the glands cover the frogs’ bodies and get absorbed through the skin. If they are injured by their attackers, then the poison can enter the amphibians’ system, posing a threat to their health.

Rebecca Tarvin of the University of Texas at Austin says the mere act of eating poisonous prey could be dangerous for the frogs. “The chemicals (alkaloids) are lipophilic, meaning that they can pass through cell membranes and permeate throughout the body.” 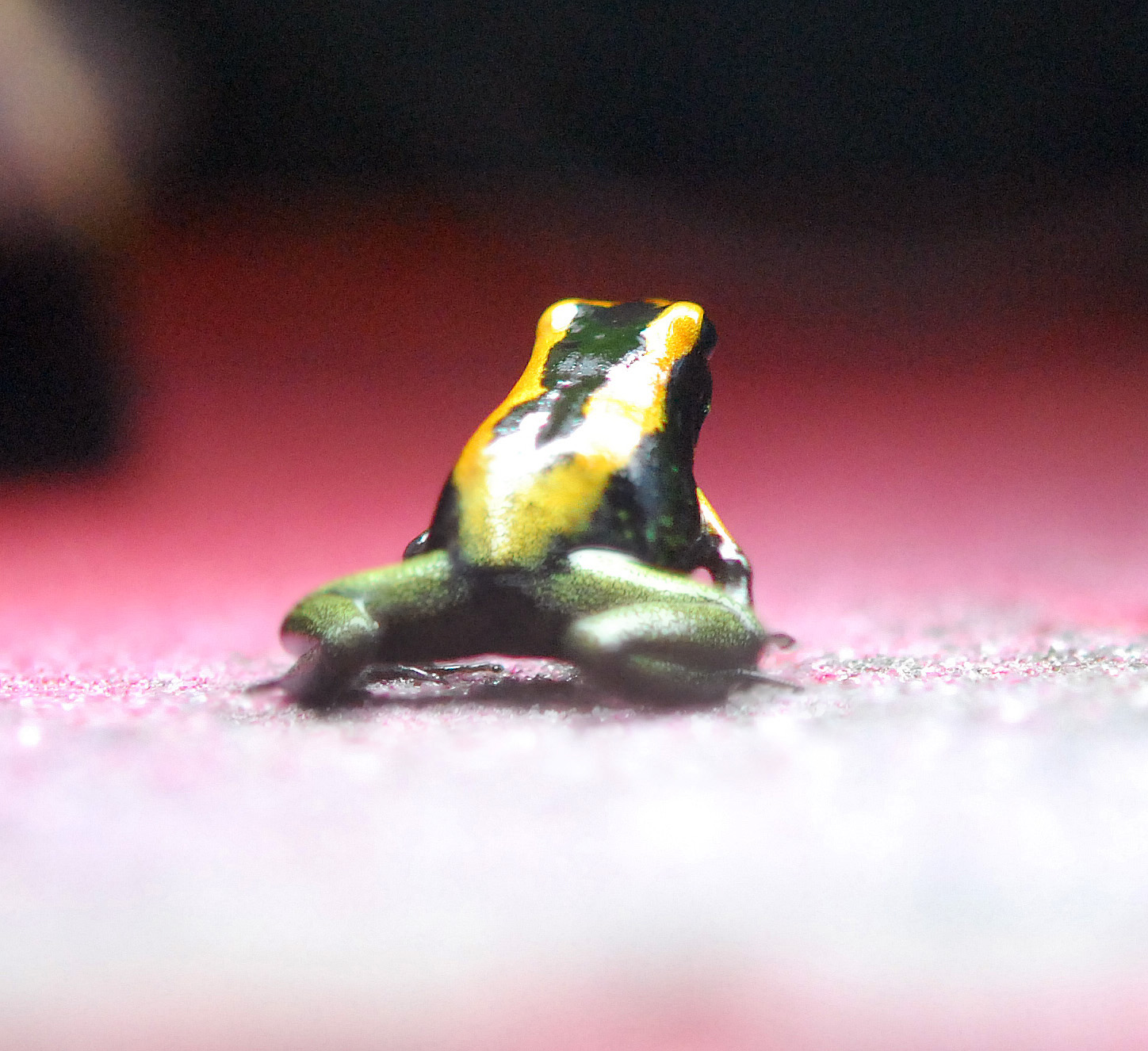 Some species like the 5-centimetre golden poison frogs live in groups of six or seven, and, as anyone who lives in a community knows, occasionally squabbles break out. This is yet another occasion for them to get a mouthful of poison. Dealing with powerful toxins is an everyday reality for the frogs.

Tarvin and her colleagues identified five amino acids in the muscles of the golden poison frog that were different from rats. Three evolved several times in poison frogs, but two mutated just once and only in golden poison frogs. Sho-Ya Wang and Ging Kuo Wang introduced these five proteins one by one and in combination into rat muscle and tested its immunity against batrachotoxin. One amino acid substitution – N1584T – blocked the poison’s action.

Voltage-gated sodium channels open and close to let sodium through cell membranes in muscles, nerves and endocrine glands. Batrachotoxin attacks these channels, forcing them to stay open so sodium ions flood the cells and causing nerves and muscles to fire uncontrollably. By switching the amino acid, the frog essentially changed the locking mechanism of the channels so batrachotoxin cannot open them. The researchers say this one genetic mutation in an amino acid makes the frogs highly resistant to batrachotoxin.

In another study, Tarvin and her team investigated the resistance of another species: the Anthony’s poison arrow frog (Epipedobates anthonyi) of Ecuador and Peru that produces another lethal alkaloid called epibatidine. Despite the frogs’ name, indigenous people don’t seem to favour their use for hunting. In low doses, epibatidine has an opioid-like pain-numbing effect 200-times more powerful than morphine. But in higher doses, it causes hypertension, respiratory paralysis, coma and death.

Instead of attacking sodium channels like batrachotoxin, epibatidine clings to nicotinic acetylcholine receptors, sabotaging the messages they transmit from nerves to muscles. As the name indicates, nicotine and other drugs lock on to these receptors too. To develop resistance to epibatidine, the frogs would need an amino acid mutation that locks the receptors from being opened by the toxin just as N1584T does in the golden poison frog. But acetylcholine needs access to these receptors to liaise between nerves and muscles. How do these frogs get around this conundrum?

Tarvin and her colleagues sequenced genes of Anthony’s poison arrow frog as well as other related species including ones that don’t store epibatidine in their skin glands. By comparing and ruling out similar amino acids, they zeroed in on four mutations in the receptors of not only Antony’s poison frogs but three groups that don’t store the toxin.

“After testing these additional replacements alone, and in different combinations, we were able to determine that they produce compensatory changes, that is, they normalized the acetylcholine responses while preserving the epibatidine resistance,” says Cecilia Borghese, a collaborator in the study. “By testing both the human and Epipedobates [Anthony’s poison frog] receptors and the corresponding amino acid replacements, we showed the replacements were both necessary and sufficient for producing epibatidine resistance.”

Why do frogs that don’t have any use for epibatidine also possess the mechanism for blocking it?

“Was epibatidine more widespread millions of years ago?” wonders Tarvin. “Is it costly to maintain resistance? Is it hard to ‘un-evolve’ resistance once it is present? I also wonder whether other acetylcholine receptors in the frogs are resistant.”

“These frogs possess multiple toxins, some of which also bind to nicotinic acetylcholine receptors, so it would be interesting to study them, and see if these replacements are also effective in producing resistance or if the poison frogs have evolved other replacements to deal with the other toxins,” says Borghese. These are all questions they hope to answer in future.

Learning how poison frogs evolved to resist their toxins without sacrificing normal functions could help researchers design a new generation of painkillers as well antidotes for smokers and drug users who want to kick their habits.

Poison frogs aren’t unique in deploying chemicals or neutralising their effects on their own bodies. Toads of the Bufo family store the bufalin in glands under their skin for self-defense. They are also highly resistant to their own alkaloids. They “accomplish this by mutating their sodium-potassium pump, an integral enzyme in every animal cell, gaining immunity to their own cardiac glycoside poisons,” Kartik Sunagar at the evolutionary venomics lab, Indian Institute of Science, Bengaluru, told The Wire. Two switches work in combination to render the poison harmless to toads. “Interestingly, predators of bufonid toads have also acquired identical mutations in these receptors in a remarkably predictable and parallel fashion.” Sunagar wasn’t involved in the poison-dart frog studies.

Despite its toxic defence, the golden poison frog has a predator: the fire-bellied snake (Leimadophis epinephelus). Like toad predators, has it evolved mutations to help it deal with the poison frog toxins? “We do not know the nature of Leimadophis epinephelus‘ immunity,” says Wang. “It will be interesting to address such a question. Furthermore, we also do not know whether neuronal and cardiac sodium channels of golden poison frogs are completely resistant to batrachotoxin. The assumption is yes, but we do not have any evidence yet. There are many more questions to be solved in the future.”

Despite the potency of the frog toxins, the hunters and their families have nothing to fear from eating the meat. However, they do have to take extreme precaution when handling their poison-tipped darts or arrows. If they accidentally inject themselves, there is no antidote.