Glassfrogs Pee on Their Eggs to Protect Them

The study also found that, apart from parental care being widespread in this group of frogs, the females are primary caregivers in many species, contrary to prevailing wisdom. 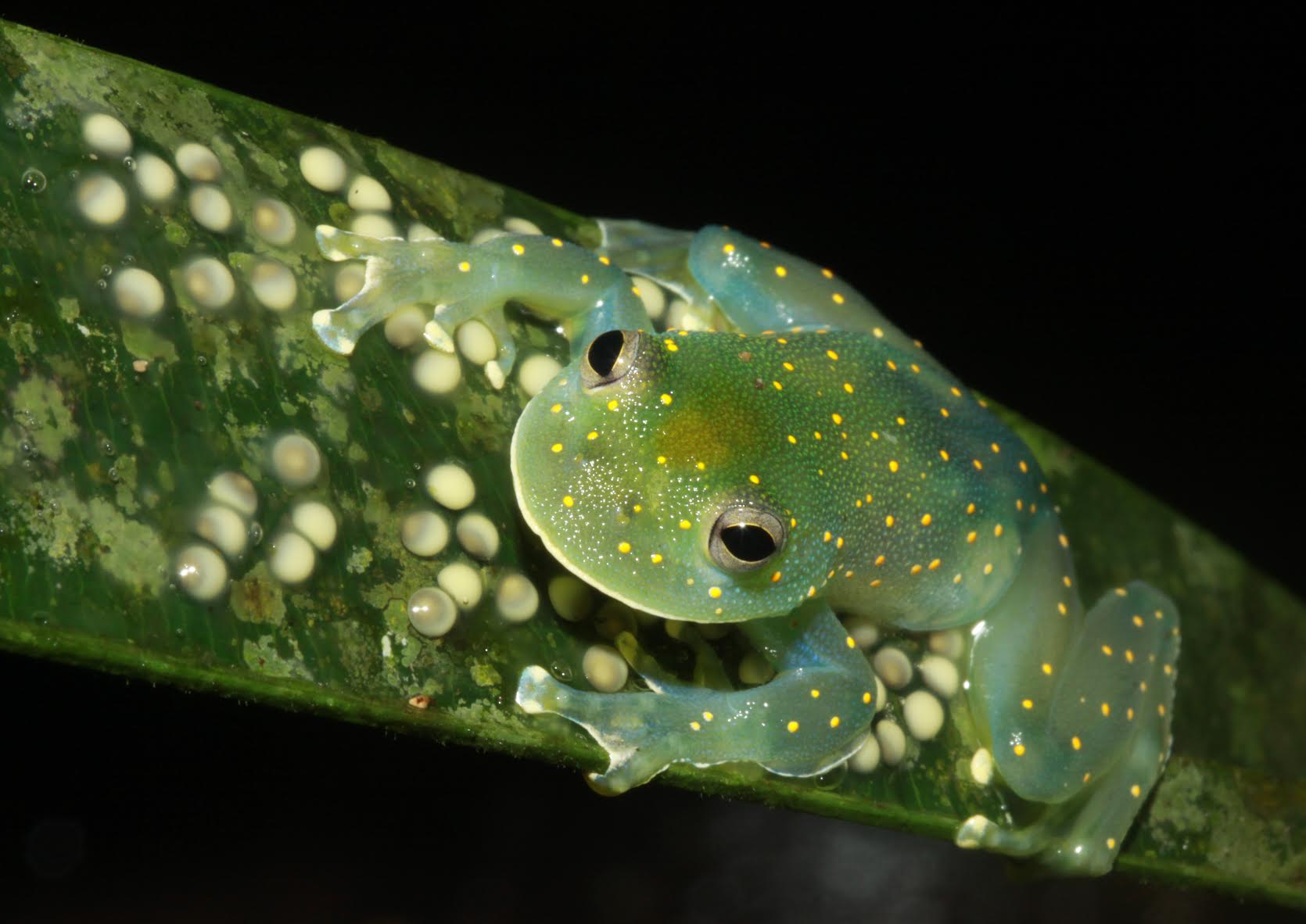 Frogs aren’t the epitome of doting parents. Less than 20% of them show some degree of parental care. Glassfrogs are a large group of 150 delicate, green, arboreal species in Central and South America. They are named for their remarkable transparent bellies, which reveal their internal organs. They lay eggs on shrubs overhanging rivers and streams, a situation made convenient for hatching tadpoles to drop into the water below. Biologists considered parental care in glassfrogs to be rare. Any parents looking after eggs the researchers noticed were all males. But according to a new study, this is not the case. Not only is parental care widespread in this group of frogs but the females are primary caregivers in many species.

Researchers from Boston University, US, and Universidad de los Andes, Colombia, observed the parenting behaviour of 40 species of glassfrogs at 22 sites across six countries: Mexico, Panama, Colombia, Ecuador, and Peru. Over six rainy seasons, doctoral student Jesse Delia and his collaborator Laura Bravo-Valencia trekked along streams in hot lowland forests as well as cold mountain streams in the Andes. They watched for glassfrogs in amplexus (as frog sex is called), where males ride piggyback on females and fertilise the eggs as she lays them.

Females ‘drink’ dew from leaves through the belly skin and lay eggs with full bladders. After fertilising the eggs, the males jump off and females stay with the mass of eggs, irrigating them with the water they had absorbed moments earlier. Hours later, the females’ bladders seem empty, but the eggs balloon to four times their original size, developing a thick coat of jelly.

The researchers discovered that every species they studied cares for its eggs in some way. In most cases, mothers brood the eggs for only one night. When eggs need long-term tending, fathers become single parents. They hydrate themselves and urinate on the eggs alternately over several nights. The exceptions are the Magdalena giant glassfrog (Ikakogi tayrona) mothers – the only females to provide extended care.

Females of some species of the glassfrog genus Centrolene stay awhile with their eggs but apparently don’t hydrate them. Only males appear to transport water to the eggs. The researchers speculate that the behaviour of females may be all that remains of maternal care after males took over parental duties.

Why do glassfrogs provide varying degrees of care? If most species can get away with a single night of brooding, why don’t others?

“That’s difficult to know,” Delia told The Wire. “Species with both care durations co-occur along the very same streams. Eggs with brief care need to cope with uncertain conditions. For example, a couple of days of dry weather and the eggs won’t make it. Those with prolonged care aren’t at risk from similar changes in weather, but parental behavior can also be unpredictable, and parents often abandon.”

In 2014, Delia found that the northern glassfrog (Hyalinobatrachium fleischmanni) tadpole embryos hatch early when they detect their fathers have abandoned them.

The eggs tended for one night often have much more jelly around them. By absorbing rainwater, they bloat up into gelatinous clusters. Eggs of other species have simpler structures that require hydrating over many nights. Delia suggests co-evolution may have a hand in this. “As parents provide more than one day of care, offspring become dependent. Thus the two could co-evolve leading to really needy eggs and parents that provide long care durations. We hope to better test this in the next set of papers.”

Other researchers reported males of the species Lynch’s glassfrog (Centrolene lynchi) care for eggs, but in this study, the biologists observed that females were the primary caregivers. How could the others have been mistaken?

“It’s normal to see males really close to eggs,” says Delia. “Such observations are common for frogs, which is why it’s important to quantify egg-directed parental behaviour and test adaptive hypotheses about that behaviour. It is also possible that this species exhibits a very low and variable frequency of male care and we missed it. However, we made much more detailed observations throughout the entire evening and duration of embryonic development.”

The researchers found mothers tending their eggs between midnight and 5 am, a window of time that other biologists may have missed.

“Because Jesse [Delia] and Laura [Bravo-Valencia] were spending all night on the streams, they saw things that nobody had seen before,” said Karen Warkentin, Delia’s supervisor and a co-author of the published paper, in a press release.

Mucking about all night every night and getting drenched in the rains can make for a miserable time. How did the researchers cope? “I grew up around New York City nightlife,” says Delia. “I would go out to clubs until sunrise, then take the bus right to school or work without sleep. We call this ‘breaking night’ where I’m from. So years of partying helped.”

He says field biology requires conditioning and patience just as a lab technician learns to pipette for hours on end without error. “It becomes meditative,”continues Delia, “thinking about the populations’ activity at all times to modify your judgment about where/when you need to be on certain sections of a stream, while jogging up and down slippery rocks in cascades to push that sample size. Humans are strange; we seem to get personal reward from the most miserable tasks.”

The trigger for this study was a chance discovery six years ago while Delia was out frog-watching until the wee hours.

“I had been monitoring eggs of Cochranella granulosa every night for a couple months in 2011, and never noticed any parental behaviour,” says Delia. “Then one night coming down the stream really late, around 4-5 am, I saw a female brooding her clutch.”

This observation challenged the accepted wisdom that this species and its females didn’t care for their eggs and triggered the current study.

Besides observing 40 species of glassfrogs in several sites in many countries, Delia and Bravo-Valencia experimented with two species – the grainy Cochran frog (Cochranella granulosa) and Chiriqui glassfrog (Teratohyla pulverata) – over three years in Panama. They sought to know how strong glassfrog maternal instincts were and what purpose their presence served.

Grainy Cochran frog and Chiriqui glassfrog mothers spend about two hours only with their eggs. Although brief, brooding behaviour is critical, say the authors of the paper.

The researchers prodded brooding and non-brooding females to see how tolerant they were to disturbance. When they touched females with no responsibilities, the frogs fled. But mothers with eggs sat tight even as the researchers pushed them. When the researchers left them alone, the mothers returned to their clutches of eggs. One grainy Cochran frog returned every time she was shoved off. On one of those five occasions, the researchers even took the time to measure her.

Next, the biologists removed 24 mothers of each species soon after they laid their eggs without giving them a chance to urinate on them. They observed the same number of other females who continued to stay with their brood.

Motherless tadpole embryos were more likely to die from dehydration, predators, and fungal infection.  The researchers fed frog eggs to captive katydids. Untended eggs had thin walls and the insects munched them down. However, the predators couldn’t get through the jelly coating to the embryos nurtured by mothers.

Protecting their eggs against predators comes at a considerable price. The adult frogs are in as much danger as their eggs. Predators like katydids and snakes wouldn’t hesitate to make a meal of the frogs. Why would these adults persist in putting their own lives at risk?

“We don’t have data to know whether caring increases rates of mortality [of parents].” says Delia. “It seems reasonable, but it’s important to quantify it. In theory, the costs of parents for prolonged care would be offset by the benefits for young – such costs/benefits would change as both care behavior and offspring need to coevolve.”

Discovering this degree of parental care surprised the researchers. “These are relatively well-studied, charismatic frogs, yet we were fundamentally wrong about their reproductive behavior,” said Warkentin.

Many Indian frog species also exhibit parental care but researchers haven’t conducted experiments to establish the purpose. After females lay eggs, male Kumbara night frogs plaster mud on to the egg clutch. More than safeguarding them from desiccation, perhaps they are protecting their eggs from predators such as crabs, feels Gururaja K.V., a frog researcher at the Srishti Institute of Arts, Design and Technology, Bangalore.

Female small tree frogs (Rhacophorus lateralis) fold the leaves on which they’ve laid their eggs into a purse. In this case, S.D. Biju of the University of Delhi “did experiments to show that the folding is to prevent eggs from desiccation,” Gururaja told The Wire.

“This study by Delia et al. is probably one of its kind considering the number of species included,” he concludes.

And what was the biggest challenge, besides pulling all-nighters, doing this study? “Getting permits in several countries,” says Delia.

The study was published in the Journal of Evolutionary Biology on March 31, 2017.