When Birds Flock Around a Sphere, Beautiful Things Happen

A new study has found that flocking on curved surfaces gives rise to unique patterns that nature could be taking advantage of – in our bodies, in the world. 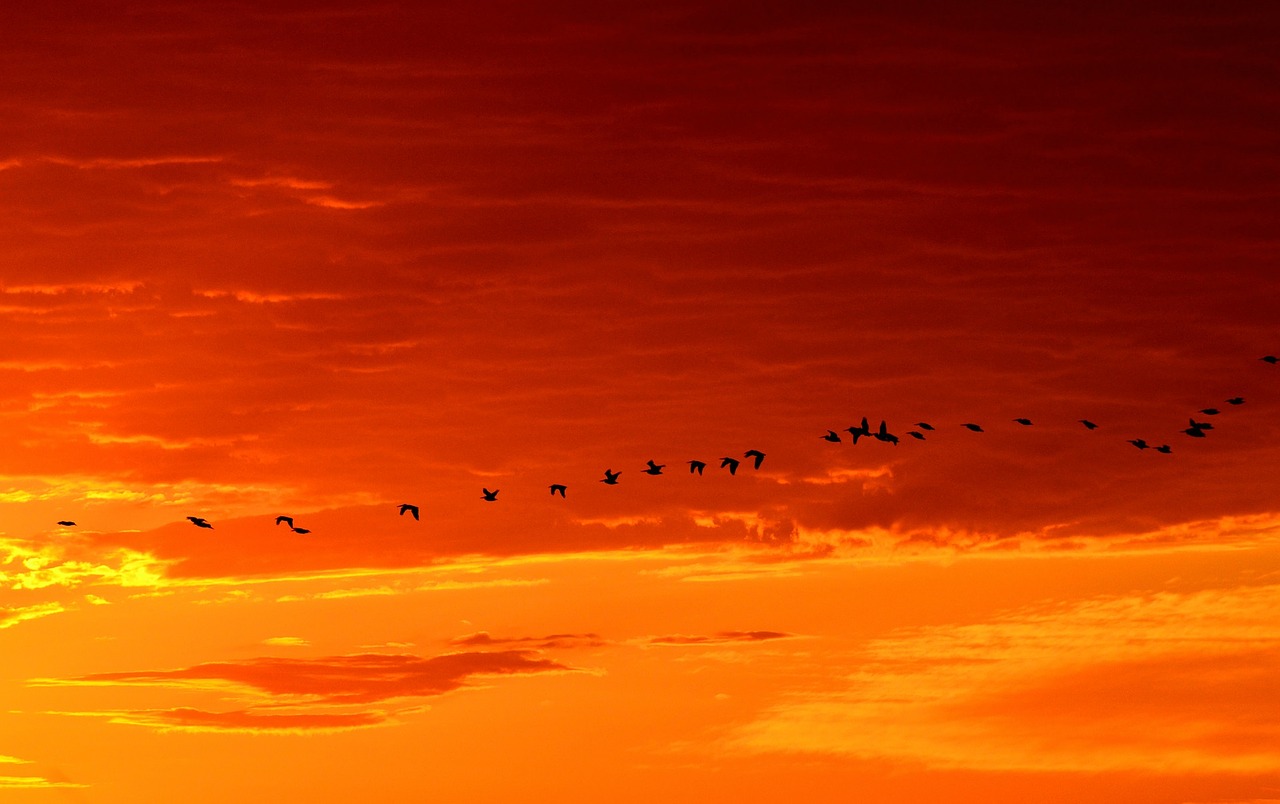 Sometimes, a flock of starlings will coalesce in the sky into a formation with fluid contours, flying across like layers of sand disturbed at the bottom of a still pond, stopping suddenly and turning with an unfelt current, rising and falling to some unknown metronome. It’s a very beautiful sight that has challenged scientists to explain how hundreds of these little birds could coordinate themselves so well. These events are called murmurations.

Murmurations are not unique to starlings; some fish do it, too. Even more birds and animals display other flocking behaviour that is not a murmuration, gathering together and moving around as if they’re one unit. When they do this, each animal in the unit is moving in the same, or general, direction as the collective. A mathematician or physicist would say that the unit has a velocity field associated with it. The field is borne out by the fact that every point – or animal – in the field has a velocity associated with it.

This model makes another stipulation: that the velocity at every point will be aligned with the average velocity in its surroundings. That is, the direction in which the animal at the centre (see image below) will be moving is the average direction of the animals around it, along the hexagon. A lousy example: If three animals are moving north and three are moving south, then the one in the centre won’t be going anywhere.

However, this model acquires a twist when the flock moves on a curved surface as opposed to a flat one. This is because the shape of the surface they’re moving on has its own effects on the velocity field, but which we don’t see, or take for granted, when the surface is flat. For example, a flock of sheep moving from east to west on a sphere will do so in ‘bands’. “The flock is densest at the equator and becomes sparse at either pole,” explained Suraj Shankar, a PhD student at Syracuse University, New York. “So the flock essentially forms a band, like a ribbon or a belt wrapped around the sphere’s equator, with the local velocity within the band aligned along the latitudes.”

Shankar is one of the authors of a new paper that came to this conclusion by asking a simple question: how do active systems behave on curved geometries?

There are some states of matter that are distinguished by how their particles move through them – such as if they were flowing over the surface of a sphere or a topologically similar shape. As a result, the state of matter acquires unusual properties that are said to be topologically protected.

Similarly, Shankar’s paper, published in the journal Physical Review X on September 7, claims that topologically protected states should exist when birds or bacteria flock – and when ocean waters flow over Earth’s surface and when winds blow through the atmosphere. He and his colleagues also say that while the atoms of a human-made topological material have to be neatly ordered for its unusual properties to arise, flocking in nature can mimic these properties without possessing the underlying order.

Of course nature does it better.

To find what they did, the scientists tackled the problem analytically: they solved mathematical problems – instead of throwing the equations into a computer program. “It is invaluable to have limits you can solve exactly to calibrate the simulations. And of course if you can solve the problem analytically then you always have a far deeper understanding,” said Mark Bowick, a professor of physics at Syracuse University and a member of the research team.

One of their findings was the banded motion around a sphere. “The essential physical reason why a flock spontaneously forms this band profile on the sphere is because when you move on a curved surface, you experience Coriolis-like forces,” Shankar said. The Coriolis force arises due to the rotation of a frame of reference. It is the force responsible for making cyclones blow towards the right in the northern hemisphere and towards the left in the southern. Shankar continued, “This force, much like the Coriolis force we feel on Earth due to its rotation, points towards the equator in both hemispheres. So the ‘flockers’ get pushed towards the equator, but they also want to line up with each other and move in the same direction. These two effects balance each other in the flocking band.”

Flocking behaviour around a sphere and a catenoid. Credit: APS, CC BY 4.0

More interestingly, he and his team also found a topologically protected ‘sound mode’ in the flock. Sound is transmitted through the air by alternating compressions and rarefactions of the air column it is moving through. Seen another way, sound is a moving density fluctuation. In the flocking-around-a-sphere scenario, Shankar & co. found that a moving density fluctuation arises in the part of the flock going around the sphere’s equator.

These ‘sound modes’ are born simple: when there are small fluctuations in the moving flock. However, the Coriolis-like force resists any motion perpendicular to the equator (i.e. upward motion) and pushes the fluctuation to move along the equator. And because the flock itself is moving in a given direction, the fluctuation has no choice but to move in the same direction.

“The two ingredients – the Coriolis-like force due to the curvature and the spontaneous motion of the flock itself – put together are responsible for the density excitations, the ‘sound mode’, propagating in a protected fashion,” Shankar said. “The mode has no choice but to move unidirectionally along the equator.”

According to Bowick, they wouldn’t have been able to look for the banded motion or the topologically protected states if they hadn’t worked out the problem on paper first.

Given the two things that give rise to the ‘sound mode’, it means that the mode will persist as long as these two things exist. So it could conceivably pass around barriers on the sphere or not die when the flock is slightly disturbed – a manifestation of the protection discussed earlier. This is interesting because, as Shankar says “regular sound waves – like in air or in water – scatter off obstacles in their path and become diffuse, spreading and losing their energy in the process”. But if nature knew that there was a protected mode that could transmit the energy even if there were barriers on the way, why wouldn’t it take advantage?

Shankar’s paper has modelled flocking behaviour on a sphere (which curves outwards) and a catenoid (an hourglass-like shape that curves inwards), and found both banded motion and protected sound modes occur on them. But this doesn’t mean that they will occur on all curved surfaces. “This does not happen for a flock on the surface of, say, a cylinder. A cylinder, unlike a sphere or catenoid, can be cut open and rolled out flat like a piece of paper. Technically, the cylinder is said to have zero Gaussian curvature, so any surface with this property will not support these special modes.”

This is a fascinating bit of research because it was borne out of a simple, straightforward consideration and the answers provide deep and meaningful insight into the working of natural systems. Curved surfaces are ubiquitous in the real world. In fact, in the early 19th century, the German mathematician Carl Friedrich Gauss had wondered how the 2,300-year-old Euclidean geometry – which worked well for flat surfaces – could be used to understand our world of curved surfaces. The result was Bernhard Riemann, his student, creating Riemannian geometry, a profound development that revealed the existence of hidden forces born from geometries that curved and twisted.

Active systems – such as birds or bacteria that move by themselves – bring to bear an additional layer of complexity to this understanding. “In the context of biology or in real (or synthetic) flocks, there might be other important effects that might have to be considered to see how to extend our results to study collective motion of cells and tissues, for example,” Shankar said. “These are open avenues that are actively being explored.”