Explained: The Simple Physics of How Tortoises Deal With Turning Turtle

This is the first study to show various shell shapes need different energy levels for tortoises that have flipped over to self-right. 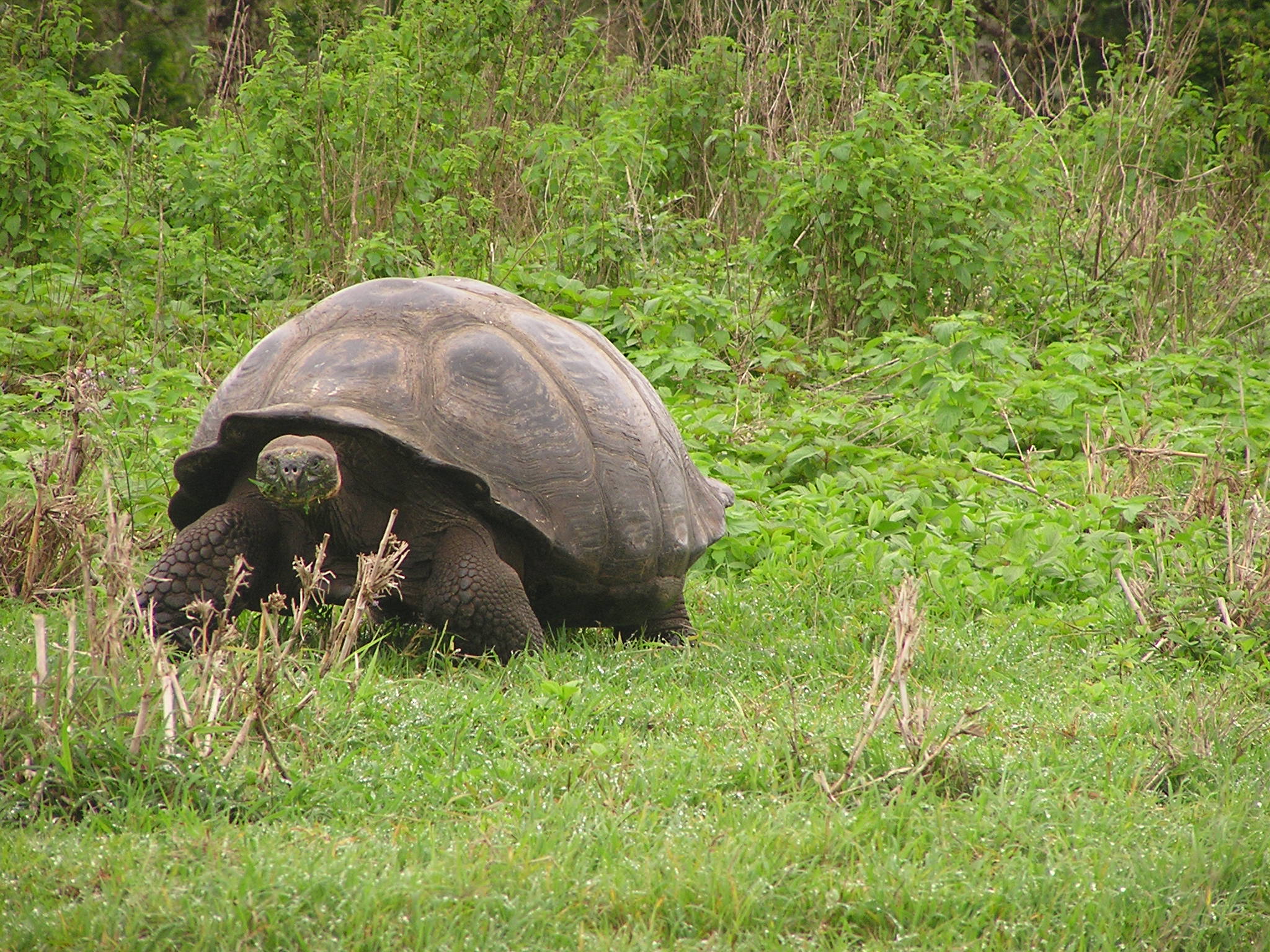 The hard shell of tortoises evolved for digging and also protects the soft body parts from predators. But it also poses a danger. The animals are extremely vulnerable if they overturn. They can’t twist their bodies around to gain a footing and right themselves. Some are able to get back on their feet, while some wave their legs in the air until exhaustion and eventually death claims them.

Péter Várkonyi and his colleague from the Budapest University of Technology and Economics, Hungary, showed the shape of the shell helps the reptiles’ ability to straighten themselves. Star tortoises have high domes and, if they roll over, they’d rarely come to rest on their backs. The upper shell, or carapace, makes sure there is only one stable position: right side up.

Turtles that generally spend more time in water have flatter hydrodynamic shells. The pancake tortoise is one extreme example that can come to rest either on its back or its belly. When they keel over, they extend their necks to the ground and lever themselves upright.

By studying upturned Hermann’s tortoises of the Mediterranean, researchers from the University of Belgrade, Serbia, came to the conclusion that size matters. The larger ones had more trouble flipping upright than smaller ones.

The carapace of the giant Galápagos tortoises come in two shapes: domed and saddleback. (Galápagos is Old Spanish for ‘tortoise’.) Some conform to neither one nor the other shape, instead sporting an intermediate appearance.

Domed tortoises trundle in the higher elevations where the air is cool and the landscape is lush with vegetation. Saddlebacks clamber over lava rocks in the lower arid areas with sparse greenery. Their shells are flatter and flare up in the front, giving the neck greater freedom of movement. These shapes evolved again and again over the course of their evolution.

The two forms are genetically distinct. When the six-centimetre hatchlings emerge from the egg, they are identical. But when they are less than five years old, their shells begin to develop their predestined shape.

So why would saddlebacks opt to depart from the classic domed shape?

According to one theory, they have to reach up high to bite into succulent prickly pears. A competing hypothesis says the saddleback shape helps males to better one another. Males engage in ritual combat by stretching their necks up high and facing off with open mouths. The flared shell helps them crane their necks. Scientists haven’t tested either of these theories. 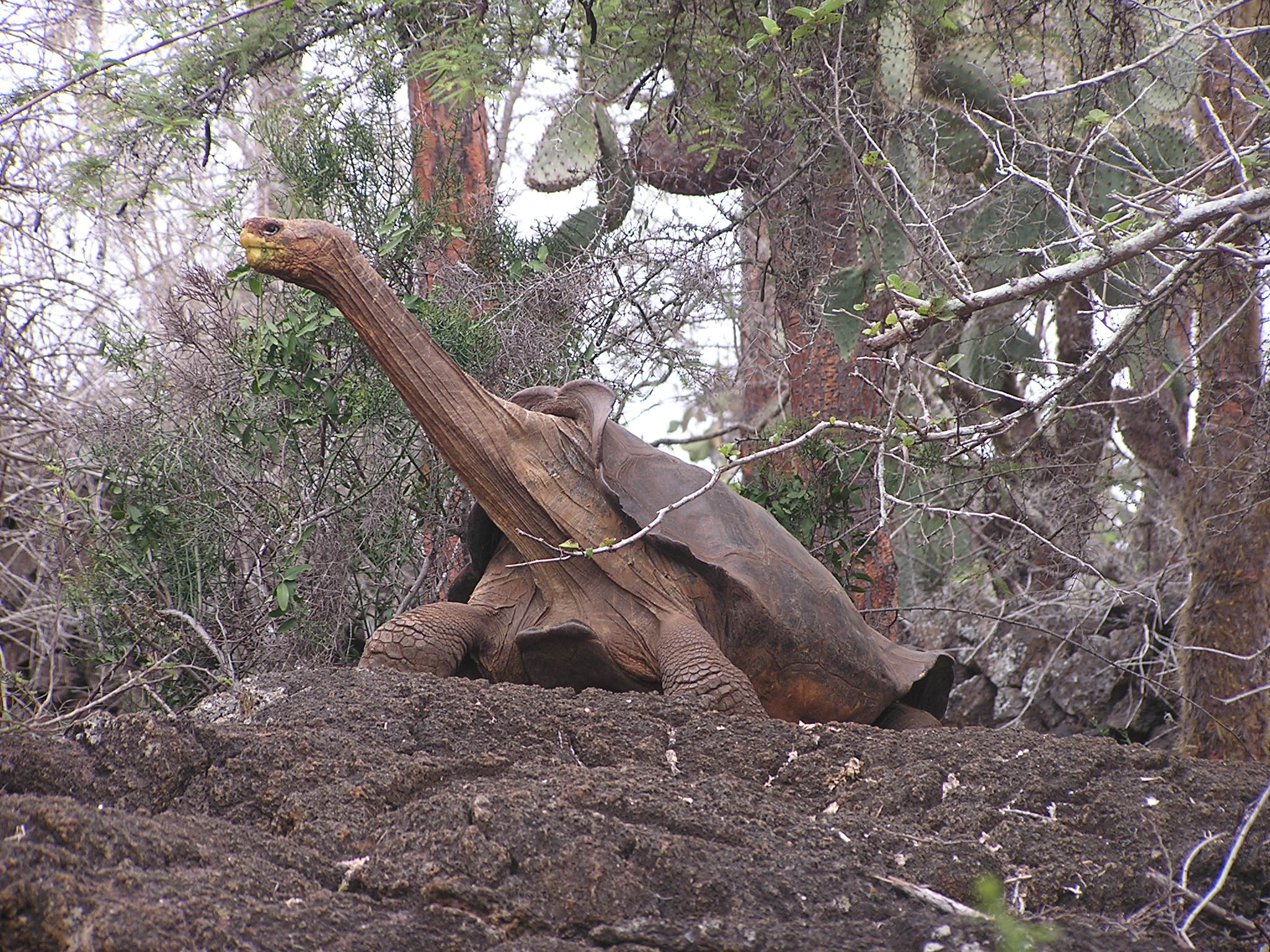 Ylenia Chiari from the University of South Alabama and her colleagues from three other institutions had another hunch. In arid areas, tortoises climb over rocks and uneven ground, a situation made for mishaps. They could trip and fall, and the chances of landing on their backs are high. Perhaps they evolved this carapace shape to get back on their feet quickly.

“I started working with Galápagos tortoises in 2006 during my postdoc at Yale,” Chiari told The Wire. “I immediately became interested in the shell variation observed in these animals. While in Montpellier (France) during my second postdoc, I reached out to Benjamin [Gilles] to work on this project together.”

Galápagos tortoises make ideal subjects to test whether shell shape has anything to do their ability to right themselves.

The researchers reconstructed the two shell types in 3D by taking photographs of 89 adult tortoises with domed and saddleback carapaces. Then they established the centre of mass that they think is similar in both kinds of tortoises.

Using the 3D reconstructions and the estimated centre of mass, they calculated how much energy upended tortoises needed to stand up on their feet. When the results came in, Chiari became excited. “It was not what I was expecting,” she says.

Saddlebacks need a lot more energy to push themselves upright. Although the dome-carapaced tortoises used comparatively less energy, they don’t have it easy.

“Estimating the centre of mass without any measurement involving live saddleback individuals is a major source of uncertainty,” Péter Várkonyi told The Wire. “Nevertheless the authors are aware of this limitation, and demonstrate that some error in their estimation preserves the validity of their results.”

Tortoises may use different strategies to straighten themselves. Saddlebacks, like flat turtles, likely push their heads against the ground and shove with their feet. But domed ones build up momentum by waving their heads and legs. Since saddlebacks rely on extending their necks to the ground, do they have longer necks? The researchers measured the length of tortoise necks and height of the carapaces, and saddlebacks indeed have longer necks. The authors suggest the energy these tortoises need to straighten themselves may come from their long necks.

Reaching more than 300 kilograms in weight, domed tortoises are larger than saddlebacks that topped out at 112 kilograms. Did their size have anything to do with their ability to stand up straight? After all, size plays a big role in Hermann’s tortoises.

The saddlebacks’ small size and the flare above their longer necks may have evolved to get them back on their feet.

The researchers don’t know what came first: the long neck, the saddle-like front opening or the flatter carapace. They hasten to add that the tortoises’ ability to self-right may not be the only reason they evolved all these adaptations. Just as the shell evolved to make them better diggers but also provides protection, these characteristics would also enable the animals to nibble on tall cacti.

“We don’t know exactly why the shells evolved this way and if it was a gradual change or [occurred] all at once,” says Chiari.

This is the first study to show various shell shapes need different energy levels to self-right.

The study was published in the journal Scientific Reports on November 30, 2017.