Elon Musk Is Not the Future

Tech CEOs are out for themselves, not the public good. Note: This piece was originally published on February 21, 2018 and is being republished in light of Robyn Denholm replacing Elon Musk as chair of the company’s board.

Silicon Valley has no shortage of big ideas for transportation. In their vision of the future, we’ll hail driverless pods to go short distances  – we may even be whisked into a network of underground tunnels that will supposedly get us to our destinations more quickly – and for intercity travel, we’ll switch to pods in vacuum tubes that will shoot us to our destination at 760 miles (1,220 km) per hour.

However, these fantasies of wealthy tech CEOs are just that: fantasies. None of these technologies will come to fruition in the way they promise  –  if they ever become a reality at all. The truth is that the technologies we need to transform our transportation networks already exist, but Americans have been stuck with a dated, auto-dependent system for so long while being denied the technology of the present  –  let alone the future  –  by politicians who are in the pockets of the fossil fuel lobby and addicted to a damaging “free market” ideology that they’ll believe any snake oil salesman — or wealthy entrepreneur  –  who comes along with a solution.

And, out of all of them, Elon Musk is the worst.

The flawed cult of Musk

To much of the tech press, Musk’s every utterance is gospel. Alongside the frequent (positive) comparisons to Steve Jobs comes the idea that simply because Musk has built some successful companies, he must be infallible; if he claims to know the solution to the transportation crisis the United States is facing, he must be right. After all, he’s a rich entrepreneur, and if there’s anything the past couple decades of US political discourse has taught us, it’s that you always trust the entrepreneur.

But the reality is that Musk’s ideas around transportation are at best “half-baked” or at worst designed to delay the construction of transportation infrastructure that could pull the United States into the twenty-first century.

Does that mean everything Musk touches is problematic? Not necessarily. He definitely deserves some credit for elevating the profile of electric vehicles and helping to push the industry in that direction, but, with regard to transportation, that’s about it. His vision of the future is not emancipatory or even particularly innovative; it’s actually quite conservative.

Musk’s imagination struggles to stray outside the confines of automobility; every one of his supposed solutions has vehicles  – Teslas –  at its core. SolarCity’s advertising emphasises suburban, car-dependent living; the Boring Company is an inefficient and unworkable attempt to solve traffic congestion without reducing the number of cars; and even his Hyperloop proposal left the door open to cramming vehicles in vacuum tubes. This should come as no surprise given Musk’s recent comments on public transit being “a pain in the ass” where “there’s like a bunch of random strangers, one of who might be a serial killer.” He valorises individual transportation because he doesn’t want to be around other people  – even seems to fear them, based on his comments –  but sticking everyone in their own vehicle simply doesn’t work in the increasingly dense, urbanised world in which we live.The truth is that rather than fawning over Musk and his fellow tech geniuses, we need to take a critical look at their proposals to see who would really benefit and whether their visions leave out fundamental considerations that are essential to making them viable in the real world. We can’t allow ourselves to be deceived by tech CEOs that put their own transportation desires and thirst for profit before the needs of the many.

Driverless vehicles are the central feature of Silicon Valley’s transportation vision and the media largely bought the assertions of major companies that they were just around the corner, even when people like Musk promised they were two years away, then, two years later, promised they were two years away yet again.The reality is that they’re not two years away; at least not the driverless pods which have no steering wheel and can navigate every road or weather condition they encounter. Many technology and automotive companies had timelines similar to Musk’s, and nearly all of them have been pushed to 2021 or later. And while they were making great progress for a while, as they were learning to drive on wide, empty suburban roads in states with clear, sunny weather, recent data from Waymo –  one of the industry leaders –  shows that progress has stalled.

We will see more driverless taxi services roll out over the next year or two, but it’s important to recognize that the vehicles will have level-4, not level-5 capabilities. That means they’ll be limited to operating in certain areas, like Waymo’s service in a suburb of Phoenix, Arizona, and they will struggle in dense urban cores with busy streets and in areas with a lot of rain and snow that could obstruct their sensors. Companies which put them in those situations anyway, like Uber and Tesla have done, may well get in trouble as reports of accidents and traffic violations continue to accumulate.

But if we put everyone in their own vehicle, where will they all go? Musk wants to build a subway-for-cars for those who want to bypass traffic. His rhetoric suggests it would be open to all, but the reality of limited space and high construction costs would narrow its ridership to the rich –  or possibly a much smaller group, given that Musk’s first planned tunnel runs conveniently from his place of work to his home.

Musk won’t admit that his tunnels will be exclusionary. He promotes the Boring Company as a means to massively reduce the cost of tunnel boring – it may even benefit public transit! – but again his assertion shows his ignorance. Musk says that his approach will finally reduce the cost of tunneling, yet subway projects in Madrid, Seoul and Stockholm have already achieved costs similar to those Musk promises only he can deliver. A New York Times investigation into the high cost of subway projects in New York City found that while the Second Avenue Subway cost $2.5 billion per mile, a similar expansion of Paris’s Metro is on track to cost only $450 million per mile. There are many factors that go into the high cost of transportation projects in the United States that Musk doesn’t address, either out of ignorance or to be purposefully misleading. This may well be the case with Hyperloop.

Musk published his Hyperloop proposal in 2013, after California’s high-speed rail project had been approved by voters, but before construction had begun. It sounded like the future: a vacuum tube that would shoot you between San Francisco and Los Angeles in half an hour and would cost only $6 billion — many times less than high-speed rail. What’s not to like? Quite a lot.

Not only would the proposed speed be incredibly uncomfortable, even nauseating, for passengers because of the force that would be exerted on them, but Hyperloop would carry far fewer people than high-speed rail: 3,360 per direction per hour, compared to 12,000. The construction costs were also found to be completely unrealistic, while Musk outright lied about the energy consumption of high-speed trains. The companies that are actually trying to build Hyperloop have found that it costs far more than Musk’s original proposal: a 107-mile (172-km) Bay Area line would cost double what Musk projected for the whole San Francisco-Los Angeles line. 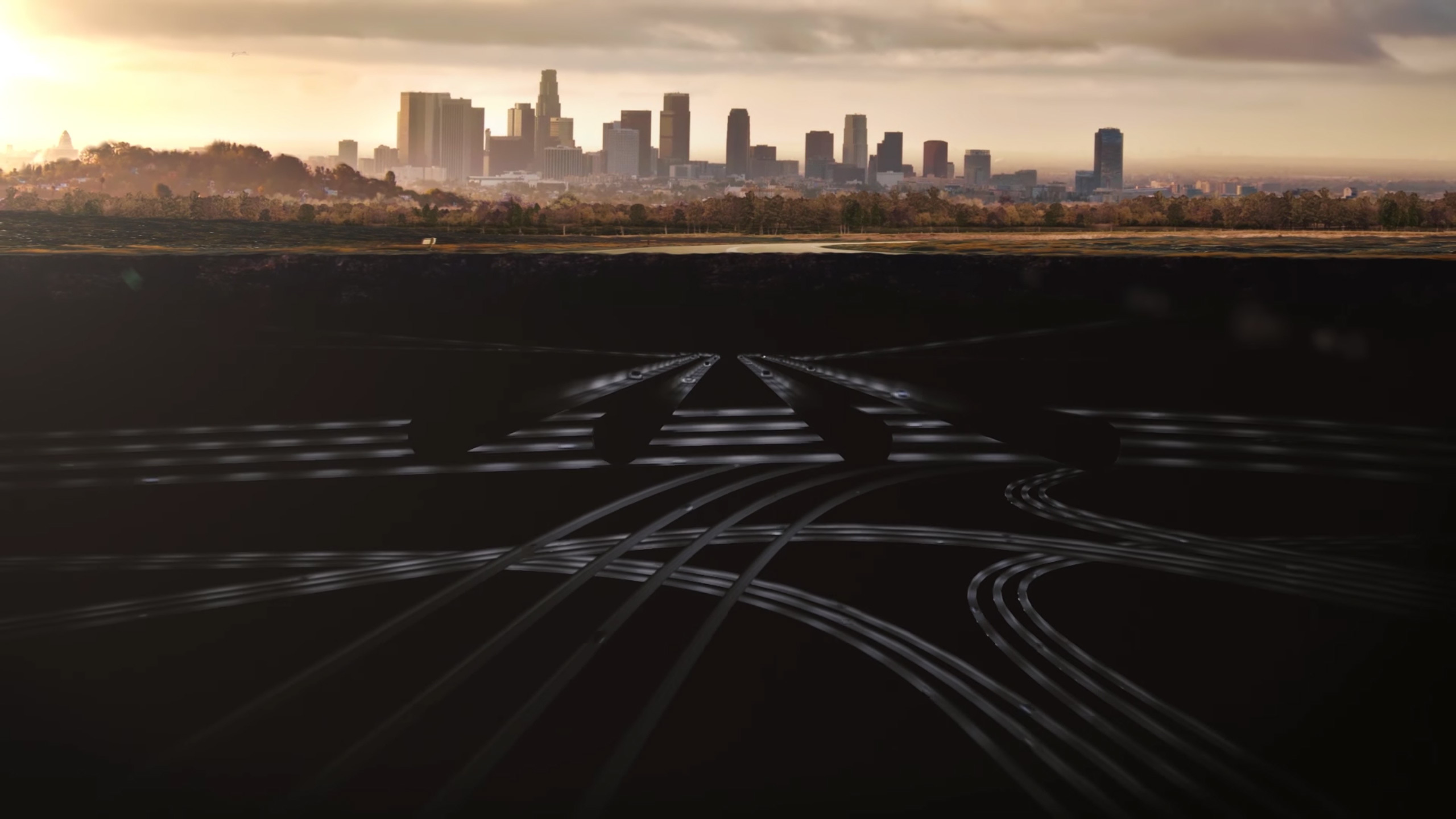 Delaying advancement to serve themselves

Putting forward pie-in-the-sky ideas to delay progress is nothing new for Silicon Valley, even though that’s not how the media presents it. Remember that many of tech’s “innovations” have depended on public research funding, while major tech companies are world leaders in tax avoidance. Every time there’s a public-transit ballot initiative, ride hailing and self-driving vehicles are used to make the case for voters to oppose increased funding for buses and subways, positioning them as the technologies of the past –  yet nothing could be further from the truth.

In our increasingly urbanised world, public transit is essential to moving around a large number of people quickly and efficiently. The individualised transport favoured by technologists will not deliver the same level of efficiency because there isn’t room for everyone to have their own vehicle or pod, especially as we reduce road space to widen sidewalks and add bike lanes.

Musk and his fellow tech CEOs promote driverless vehicles as the future because it’s the future they desire. They don’t want to be on a subway or train next to regular people – as Musk has already said, one of them might be a serial killer! It’s troubling how much they want to isolate themselves from regular people, but the reality of urban mobility is that only a small portion of the population can be in individualised transport until it simply stops working. That’s part of the reason traffic congestion is so bad in our cities; all those cars simply don’t fit, and the solution isn’t to have artificial intelligence take the wheel, but to move people in more efficient ways.

On top of his personal desires, Musk has a financial interest in retaining automotive dominance in the twenty-first century – he runs a car company! Public transit and high-speed rail are directly opposed to his interests, which is why he spreads ideas that will never come to fruition, but can be used by certain groups to campaign against funding for efficient transportation.

While US infrastructure crumbles and the focus is on repairing what’s there instead of building for the future, China and Europe have built extensive networks of high-speed rail and public transit. Their citizens are benefiting from technologies that are designed to efficiently move large numbers of people, while Americans are unhappily stuck in their vehicles with ever-rising commute times.

Americans need to stop drinking the Silicon Valley Kool-Aid – or should we say “Soylent”? –  and start demanding better transportation options which free them from automobile dependence. The tides do seem to be turning, as cities across the country pass ballot initiatives to expand public transit and California pushes ahead with its high-speed rail line in the face of intense pressure from short-sighted conservatives.

It’s not true that public investment doesn’t generate prosperity –  just look at the interstate highway system –  but it will take political will, increased scrutiny of tech entrepreneurs, and an end to the austerity agenda to get government investing in the future once again. Huge investments in science and infrastructure helped the United States become prosperous, and the construction of a national high-speed rail network and mass expansion of public transit  – similar to what China has accomplished over the past decade – would be the forward-thinking move necessary to show Americans that their country can still achieve great things.