Is Disgust a Universal Emotion?

Some wild chimpanzees wipe off their penes after sex. One dung-beetle species avoids carnivore caca. Some animals use vomit, faeces or gas as defensive strategies against predators and rivals. 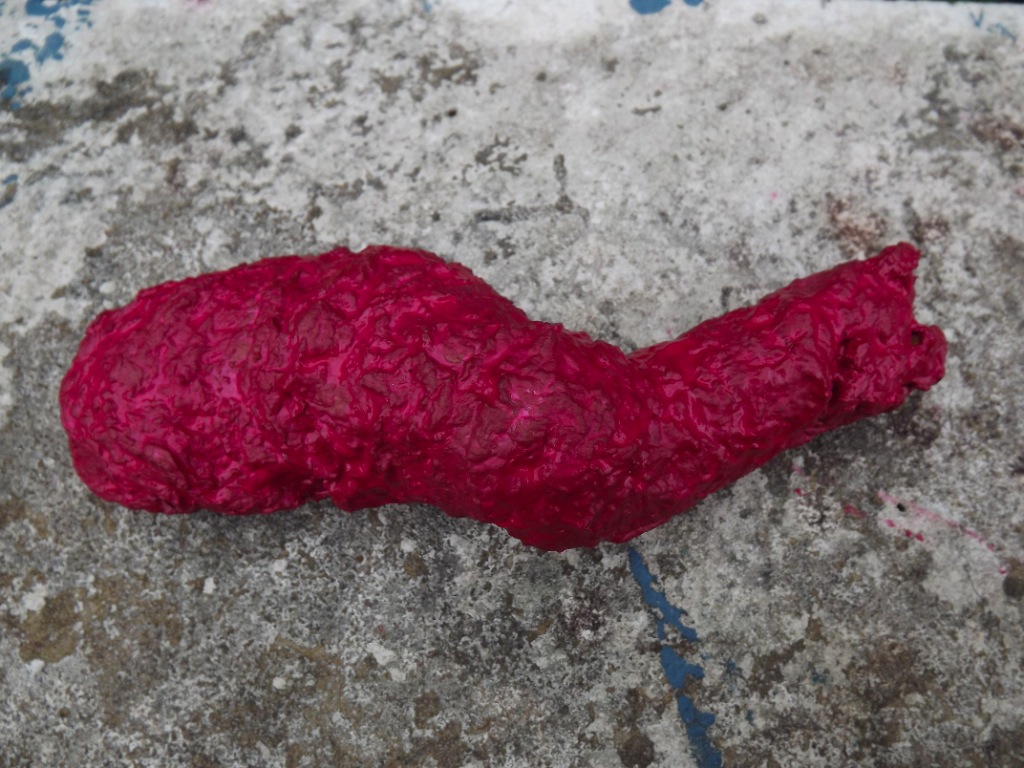 Would you eat a piece of chocolate that smelt of faeces or was contaminated by it? Or, let’s say, you thrust your hand into a box without looking first. But your prankster friend had put something in there that feels like excreta. Would you continue to rummage around? What explains our aversion to poop that some synonyms are even considered vulgar?

We are also disgusted by other bodily fluids – blood, vomit, semen, snot. We recognise them by texture, smell and sight, and revile anything that resembles them. One theory suggests disgust is evolution’s way of maintaining hygiene and good health.

Animals and humans living in close quarters are at higher risk of disease. Contact with one another transmits many contagious diseases, from common cold to hepatitis. Microbes merrily circulate, reproducing and causing havoc.

Our defence involves three actions: avoid contact with anything that could make us sick, boost immunity to fight it off if we do get infected, and tolerate it without suffering. Avoiding contact is by far the most effective preventative measure. Since body excretions contain eggs and parasites, the feeling of disgust keeps us from touching them.

Humans aren’t the only animals to avoid droppings. Ungulates visit specific spots to evacuate their bowels and these areas can be crawling with nematodes. So the animals avoid such latrines and forage in unsullied pastures.

Even insects that handle dung are careful. One species of dung beetle in South Africa (Scarabaeus lamarcki) avoids carnivore ordure that host disease-causing bacteria. It instead targets herbivore dung. These creatures use their sense of smell to stay away from excrement.

Not much is known about primates other than humans. Male chimpanzees in Uganda and Tanzania fastidiously clean their penes with leaves or their hands after sex. Researchers aren’t sure if this personal hygiene behaviour protects the primates from sexually transmitted diseases. But others of the species in Ivory Coast, Guinea and other parts of Tanzania aren’t as squeamish.

But good health isn’t the only reason for this aversion. “For example, some animals use vomit, faeces or gas as defensive strategies against predators and rivals,” says Cécile Sarabian. “Although we can’t know what animals are feeling, their behaviour resembles ours and we know how we are feeling at those moments.” 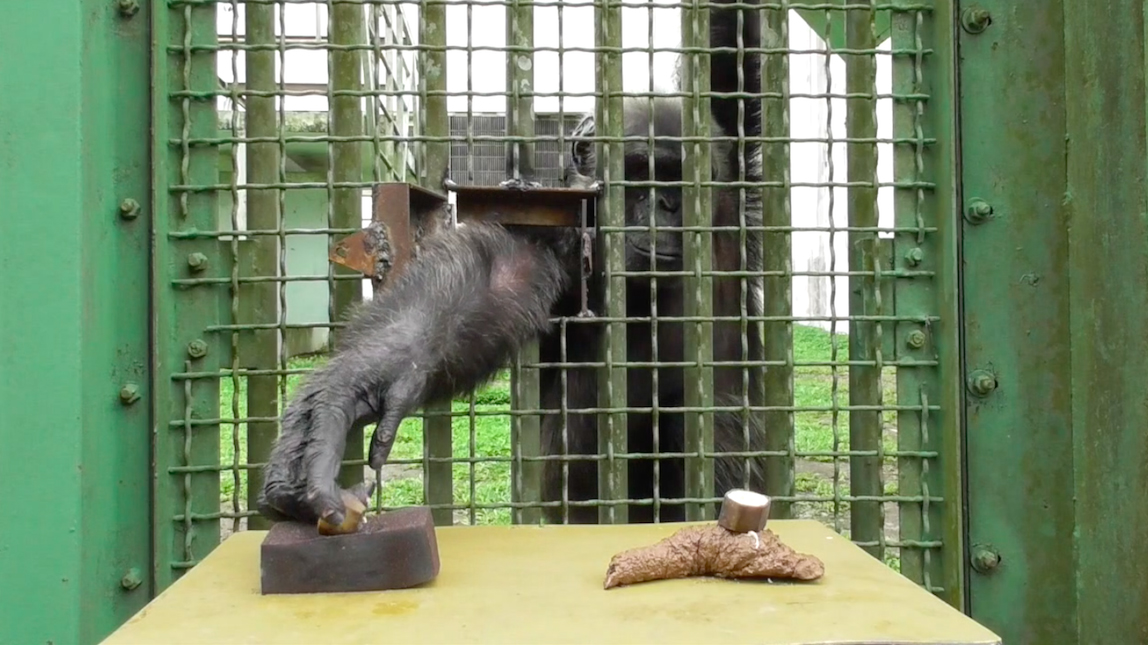 Sarabian, a doctoral student at Kyoto University, Japan, had studied Japanese primates on Koshima, a small island in the far south where they are fed wheat. Her advisor, Andrew MacIntosh, studies how diseases travel through wild animals. “I noticed that when grains of wheat hit the top of faeces, they just remained there,” Sarabian told The Wire.

She came to the conclusion that by cleaning acorns, washing sweet potatoes and avoiding food resting on faeces, the primates suffered from fewer parasites. She and MacIntosh wondered whether chimpanzees and bonobos also behave similarly. “We knew that great apes do not have the same dexterity as macaques when it comes to food processing.” Did they shun contaminated food? And if so, how did they detect it? Do they use sight, smell, or feel? To answer these questions, Sarabian headed to Gabon.

She bought replicas of poop online from Barcelona, Spain, which has a scatological fixation. “When I arrived in Gabon, I had two bags – including one full of fake poops,” recalls Sarabian. “At the customs, they were stopping everyone to check the bags and I was like ‘oh nooo, what am I gonna say?’ I thought I may have to bribe someone for getting fake poops in the country, but by the time my turn came, they were checking one bag [per passenger] and luckily they chose the other bag.” Sarabian blogs about her fieldwork here.

She put a group of 20 chimpanzees at a captive facility in southern Gabon through their paces. To test if the primates avoided excreta on sight, they set pieces of bananas on top of three objects: replicas of faeces made of papier-mâché in brown and pink colours and a rectangular piece of foam. If the chimpanzees recognise and stay away from excreta, they take the banana from the foam, maybe the piece from the pink poop, but turn away in revulsion from the brown faeces.

On the contrary, they didn’t care, eating the fruit placed on foam or stuck to caca. They did seem to prefer bananas on foam first and then pink poop. Once they gobbled those up, they reached for the one on brown replica.

Did they see through the experiment, realising those were poop replicas and not the real thing? Or were they being slobs? Even Japanese macaques were more careful when given the same option. Chimps can see pink so colour blindness is no excuse. Maybe they knew faeces of that colour cannot exist even though the shape was suspiciously similar. Still, it doesn’t explain why they went for the fruit on the brown faeces.

They ate banana every day; perhaps they loved it so much that nothing could come between them and their treat. Perhaps if it had been a less desirable food item, they would have been fussier. Japanese macaques didn’t touch contaminated wheat, but when they saw peanuts stuck to poop, temptation won over aversion.

Another consideration for the chimpanzees’ weak wills may be the timing of the experiment – set before they had their breakfast. Hunger could have trumped discretion. Humans are no different. If they were famished, they weren’t put off by mouldy corn.

Disgust could also be a cultural trait. Just as some wild chimpanzees wipe off their penes after sex but others don’t, perhaps the ones at the captive facility had lower thresholds of disgust.

In the next phase of the experiment, Sarabian tested if the primates’ sense of smell would help them stay clear of contaminated food. Out of their sight, she rubbed a piece of bamboo with faeces (not the fake thing but the real one), blood, semen or water and fixed it to next to a box. She then attracted the primates to the box with a piece of banana that she held behind the bamboo piece. A few seconds after they arrived, she dropped the fruit into the box under their watchful eyes. They had to smell the bamboo before eating.

This was by far the worst part of the experiment, says Sarabian. She had to bear the smell of these biological fluids despite wearing a mask.

But even without a mask, the chimps apparently weren’t put off by the smell. Blood, semen and water didn’t deter them. But the stink of faeces put them off… only a little bit. If even the stench didn’t repel them, maybe the feel of caca would be revolting.

Sarabian kneaded dough to the same consistency of poop and hid it inside a box. In another, she hid a piece of rope. In front of her chimpanzee audience, she placed a piece of banana into each one and observed their reactions.

One captive chimpanzee was a trying experimental subject. “Brigitte was known to fling faeces at people and I was not an exception,” rues Sarabian. “She was not always easy to test and my white lab coat was often not white anymore after performing experiments in her enclosure.”

She had 42 chimpanzees do this trial. Unlike the previous two tests, “we had only one trial per individual per condition – dough or rope,” explains Sarabian, “because we were interested in their first reaction to these substrates and did not want them to get habituated or acquire visual cues of the substrate by pulling it out of the box.” She made up for the fewer trials but adding more subjects.

Humans had already done this test. When asked to rate different materials based on moisture, consistency and temperature, they said wet, smooth substances that felt like dough or caca were disgusting. Would the chimpanzees have similar reactions?

The chimpanzees didn’t like the wet, soft consistency of dough. This time, they refused to eat the piece of fruit they thought had been set on top of faeces.

It’s possible the chimpanzees recoiled because they hadn’t had much experience with dough-like substances or the newness of the experience put them off. 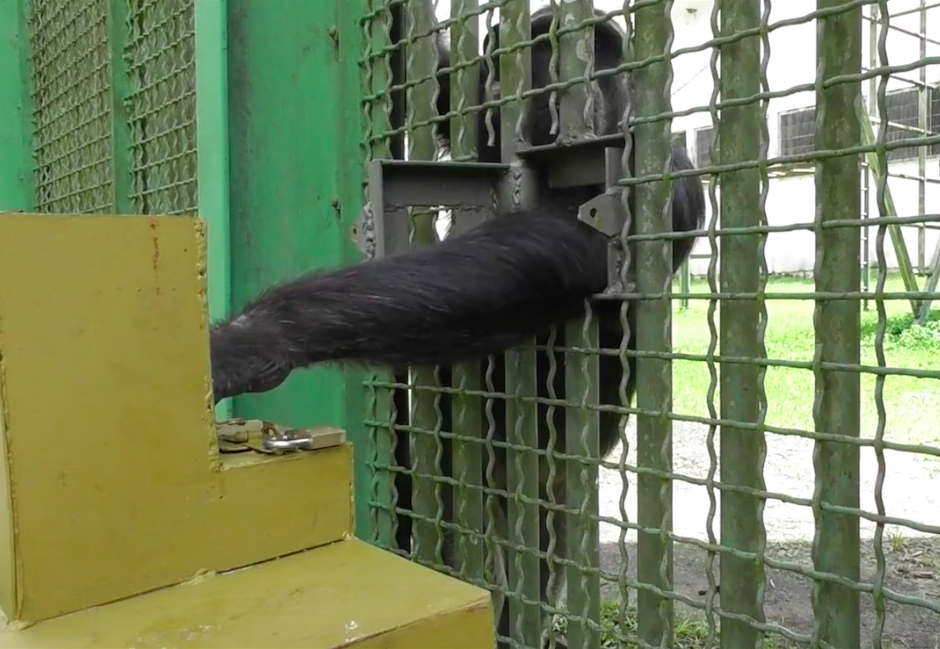 A chimpanzee feels inside a box containing a banana that may rest on dough or rope. Credit: Cecile Sarabian

“The key points of this study are that chimpanzees delay eating food items placed atop replica faeces compared to the more benign brown foam,” says Sarabian. “They generally stay farther away from the smell of potential biological contaminants (conspecific faeces, blood and semen), and recoil from food items associated with soft and moist substrates.”

Sarabian concludes that disgust doesn’t totally force the animals to shun tainted food. “Avoiding potentially infectious materials makes sense in an evolutionary framework,” says Sarabian, “but these results additionally open the door to the possibility that our own experiences of disgust may be more widespread in the animal kingdom than once thought.”

Is aversion to poop an innate trait? Human parents have to be watchful of what toddlers shove into their mouths. When the children are old enough to understand, the grownups teach them not to eat anything that has fallen on the ground or has been defiled in any way. Some children have a propensity to play with poop. If there’s an evolutionary mechanism at work, it directs youngsters to stuff their mouths with anything. That is how children build their immune systems.

Besides, newborns inoculate their guts with the microbes needed for digestion by eating faeces, in tiny amounts and not big globs of it. If feeling disgust is an evolutionary mechanism to encourage hygiene and avert disease, it seems to have failed.

Despite toddlers’ attraction to filth, one study found three-day-old infants showed their disgust of butyric acid, a volatile compound found in vomit, by curling their upper lips or wrinkling their noses.

“Few things in nature are truly 100% learned or 100% innate.” says Sarabian. “The ontogeny [origin and development] of this behaviour is a question worth investigating further.”

This study also opens up the field to a lot more questions. For one thing, does aversion to bodily fluids vary by individual? Does personality affect an individual’s parasite load? Or does avoidance of contaminated food items relate to “physiological responses, such as a drop of blood pressure, or the activation of certain face muscles, for example, both associated with the expression of disgust in humans”?

The study was published in the journal Royal Society Open Science on November 8, 2017.